Tiffani Faison and Andy Husbands will be regular guest judges on Fire Masters, which premieres this month in Canada. 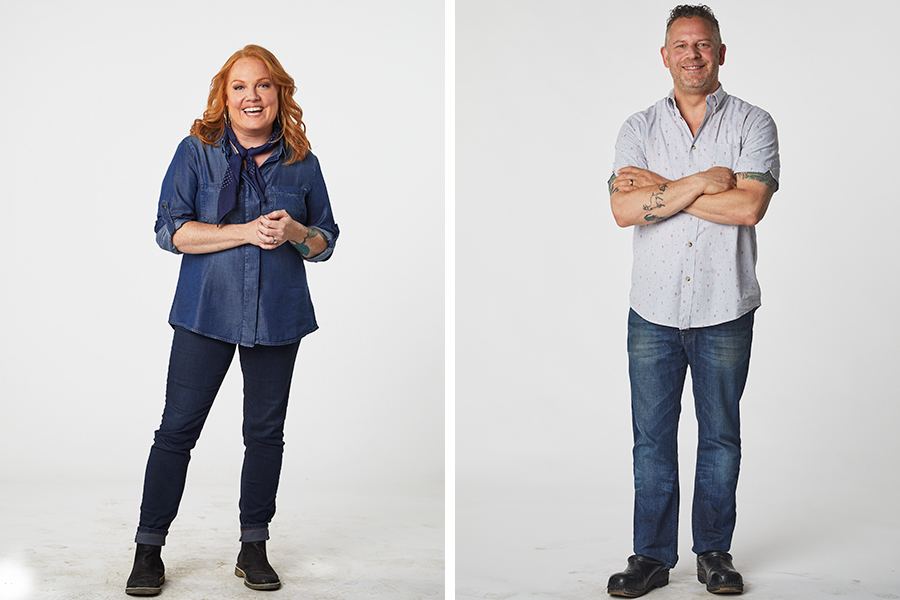 The Boston barbecue scene will get a spotlight shone on it this spring—in Canada. Chefs Tiffani Faison (of the beloved Fenway smokehouse Sweet Cheeks Q) and Andy Husbands (the man behind the growing, low-and-slow restaurant group the Smoke Shop BBQ) will be regular guest judges on a new Food Network Canada competition called Fire Masters. The tournament TV show premieres March 21 in Canada only (at least for now), but will star culinary talent from around North America on what Husbands calls “a fun, good concept” for the now-familiar, three-round, cooking contest format.

Fire Masters is hosted by Canadian chef Dylan Benoit, and features a rotating cast of more than a dozen guest judges who excel at live-fire cooking in some way. Along with Faison and Husbands, the lineup includes one-time Patriots player-turned Food Network Star Eddie Jackson, who also owns a Houston beer garden; Hugh Mangum, pitmaster and cofounder of Mighty Quinn’s BBQ in New York City, which has 15 locations and plans to expand into the Boston area; and James Beard award-nominated cookbook author and chef Amy Mills of the 17th Street Barbecue Empire of Murphysboro, Ill.

While the show centers on the grill, it’s not limited to barbecue people, Husbands says. “Chef Tiffani and I are chefs that not only do barbecue, but are also known for other things as well,” Husbands says. That “wide breadth of knowledge” is indicative of the overall Fire Masters cast, he adds.

The show brings on three competitors per episode, and the last cheftestant standing faces one of the judges in the final round. There’s a $10,000 cash prize—and the title of Fire Masters Champion—for one competitor at the end of each episode. Husbands, like all of Fire Masters’ guest judges, will appear on multiple episodes this season, and he says “it’s safe to say I’ll be competing at some point.”

The game show does ask the chefs to use specific ingredients from the well-stocked pantry, but “there’s no goofiness,” Husbands says. He appreciates that, unlike some other reality shows, Fire Masters doesn’t feel manipulated or contrived. “No one’s cooking with gummy bears. No one’s asked to use uni for dessert,” he adds, making reference to a last-round mystery ingredient that contributed to the Smoke Shop chef’s runner-up loss on the first episode of Chopped Grills Masters in 2017. Husbands fans can find Grill Masters: Battle 1 on Amazon Prime, as well as season six of Hell’s Kitchen, his first foray into food TV. The pitmaster hints at future TV appearances for himself, but can’t share details yet.

Faison is no stranger to food TV, either. The Best of Boston chef, who also owns the Fenway’s Tiger Mama, Fool’s Errand, and forthcoming Orfano, is famously the first-ever Top Chef runner-up (but don’t hold that against her). The first season of that Bravo TV hit is available on Hulu and other online streaming platforms. She’s also a regular guest judge on Chopped here in the U.S.; Faison’s next Chopped appearance is on Tuesday, March 26, at 9 p.m., in an episode called “Dollar Dishes.”

Fire Masters will premiere on Thursday, March 21, at 10 p.m. on Food Network Canada. At this point, there aren’t plans to make the new show available to a U.S. audience, but Boston magazine will let you know if and when that changes. In the meanwhile, we’re excited to see the smokin’ hot barbecue scene north of the Mason-Dixon line—and Boston’s BBQ royalty—get some well-deserved international attention.