Rejoice, These Cambridge Noodle and Pasta Masters Are Combining Forces

The chef-owners of Yume Ga Arukara and Pammy's are hosting a Japanese-Italian dinner party. You're invited. 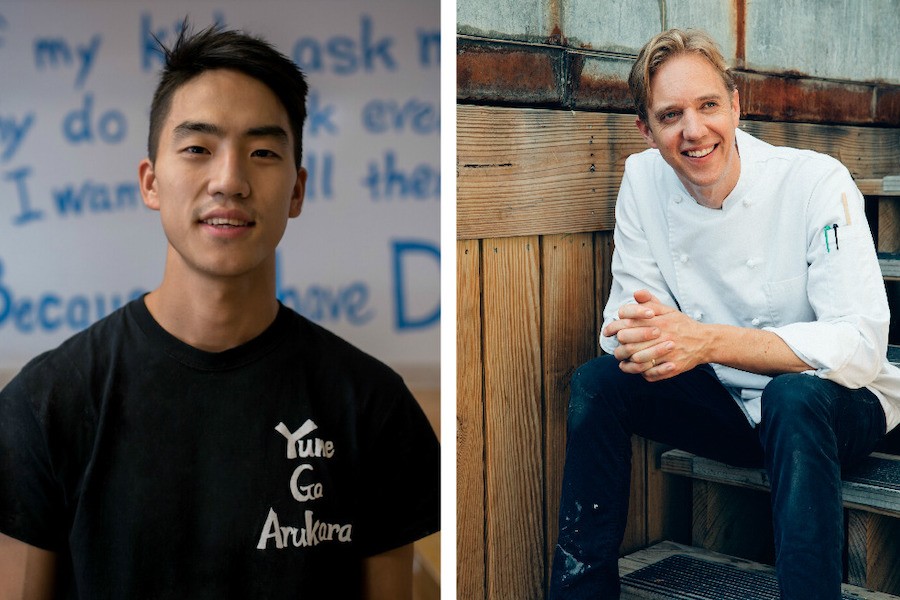 The culinary culture clash—nay, complement—came about after both restaurants were named to Bon Appétit magazine’s list of America’s best new restaurants in 2018. “We started eating at each other’s places, sharing some ingredient tips, and realized we have a lot in common,” Willis says. “From house made noodles to utilizing ingredients from other cultures to enhance and develop layers to our food, there is a lot of crossover. We got inspired to work on something together and highlight these interesting combinations.”

Every dish at the dinner, which will be hosted at Pammy’s, will incorporate elements from both restaurants and feature Asian- and Italian-inspired flavors. For instance, you can expect a cold noodle dish of udon with shungiku (chrysanthemum greens), umami tomatoes, crunchy tenkasu (tempura batter crumbs) made with parmesan cheese, salt-brined celery root, and a dash of Yume Ga Arukara’s proprietary chili oil. Guests can add on a wine and sake pairing, and the special Japanese-inspired cocktails will make an appearance.

The chefs shared a few other thoughts on working together:

How’d this collaboration come together?

Willis: “Asian flavors have always been on my radar when creating food at Pammy’s. As far back as when I worked with Wayne Nish at my first job in New York, through to the early days at Clio with Ken Oringer, I’ve been around Asian ingredients and cooking techniques. I always joke that Asian cuisine has an unfair advantage because the food is so rich with umami by way of fermentation, and there seems to be an innate understanding of sweet, sour and balance. Western culture has been slower to understand this. After finding ourselves on the Bon Appetit list with Yume, I felt a certain kinship, which was strengthened by [wife and co-owner] Pam and my experience sipping noodles with our two daughters at their Porter Square restaurant. The food was obviously prepared with a deep respect for tradition, and the ingredients were thoughtfully combined to create a balanced flavor punch to the palate.”

Shinoda: “Personally, I am always looking for more ways to showcase the versatility of udon noodles, so when Chris said he was interested in working with the udon noodles I was excited, because I knew it would allow people to see our udon in a different light.”

I heard you may be creating a new udon noodle for this dinner. Can you elaborate on that?

Shinoda: “The recipe for our udon noodles is constantly being adjusted due to changes in weather and ingredients. Chris was telling me how important it is for the flour to be fresh, and he showed me the process of milling wheat berries and turning them into fresh flour. That inspired me to start blending our flour recipe with other types of flour to create a better flavor and texture. So, for the event I plan on using a slightly different recipe for our noodles.”

What’s something new that you learned about the other’s style of cooking?

Willis: “I think there’s a lot about Japanese food that people still don’t realize—myself included—and haven’t explored. Too often Americans consider sushi to be the ambassador of the cuisine when it is so much more than that. The complexity of the broths is as profound as the sauce-based cuisine of France and the assortment of side dishes is as varied and seasonal as a spread of contornis or antipasti at an Italian feast. More than anything, I was reminded of and inspired by this: just how rich and varied Japanese cuisine is.”

Tickets for the  five-course dinner are $65 per person (plus $35 for optional wine and sake pairing). Reservations are available between 5-10 p.m. and can be made by calling Pammy’s, which will host the dinner, at 617-945-1761. Pammy’s is located at 928 Massachusetts Ave., Cambridge, pammyscambridge.com. Yume Ga Arukara is located at 1815 Massachusetts Ave., Cambridge, yumegaarukara.com.