6 Stylish Cocktails Made With a Traditional Irish Spirit 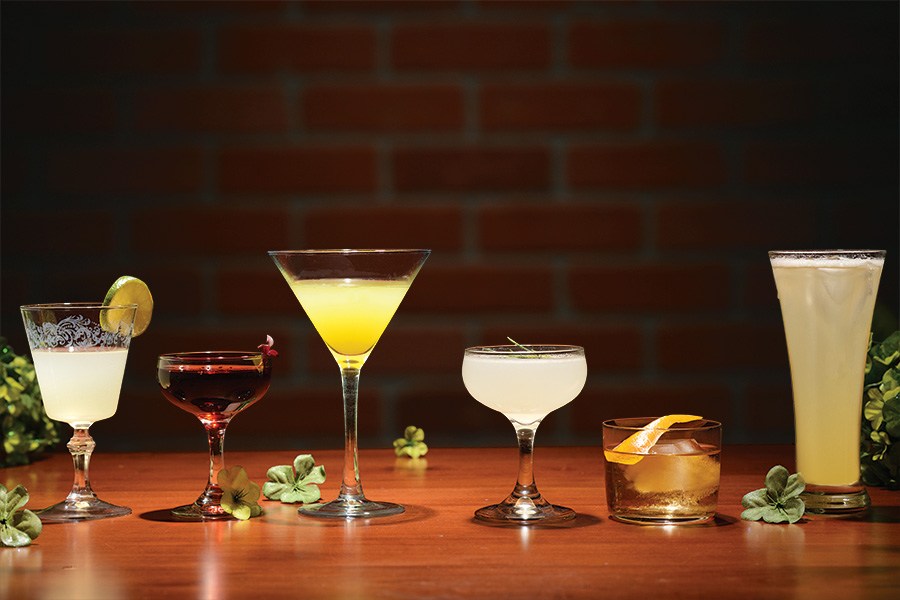 Cocktails, from left to right:

At this South End tapas haven, bartender Sahil Mehta enjoys introducing guests to traditional spirits from around the world. His Celtic Tiger shows several stripes: malty poitín meets the sweet-savory notes of Dutch-developed kümmel, flavored with caraway seed, fennel, and cumin, as well as falernum, a Caribbean staple spiced with clove and ginger. A little lime juice ties it all together.

To represent the melting-pot heritage of Eastie’s Jeffries Point, one of the neighborhood’s oldest residential sections, head bartender Joe Camiolo mixes Glendalough poitín, made from malted barley and sugar beet, with the crimson Italian and French cordials Campari and Lillet Rouge. The cocktail, garnished with blood-red beet sprouts, has a light sweetness that’ll leave you feeling sanguine.

When bar manager Iveta Dragomirova needs poitín, she turns to Ireland’s
Glendalough Distillery, whose cofounder lives here in Boston. This month the swishy French bistro starts pouring a delicate Poitini, combining the whiskey with dry white vermouth and a shot of fresh green apple juice for some natural acidity,
plus lavender and orange bitters.

The name of the Irish-made poitín Mad March Hare was inspired by an idiom about competitive male rabbits brawling during mating season. But avoid bar fights, please, after sipping the spirit in beverage manager Mary-Margaret Gallup’s similarly named herbaceous cocktail. It’s enhanced with vermouth, bergamot oil, and rosemary syrup, and garnished with a rosemary sprig.

Named for a Clint Eastwood flick, this drink packs a serious punch: After all, poitín is “raw in nature,” says Trina’s co-owner Beau Sturm. “It comes out of the still and there is a lot of complexity and character.” His Manhattan riff combines it with orange bitters and Amaro Montenegro, accentuating the nuttiness of the latter.

For the brunch menu’s lineup of “Hangover Drinks,” this neighborhood pub softens the potency of poitín with the sweetness of pineapple juice, then makes use of its strong craft-beer list by adding a topper of crisp, refreshing Hefeweizen. Consider it a much lighter hair of the dog that bit you.