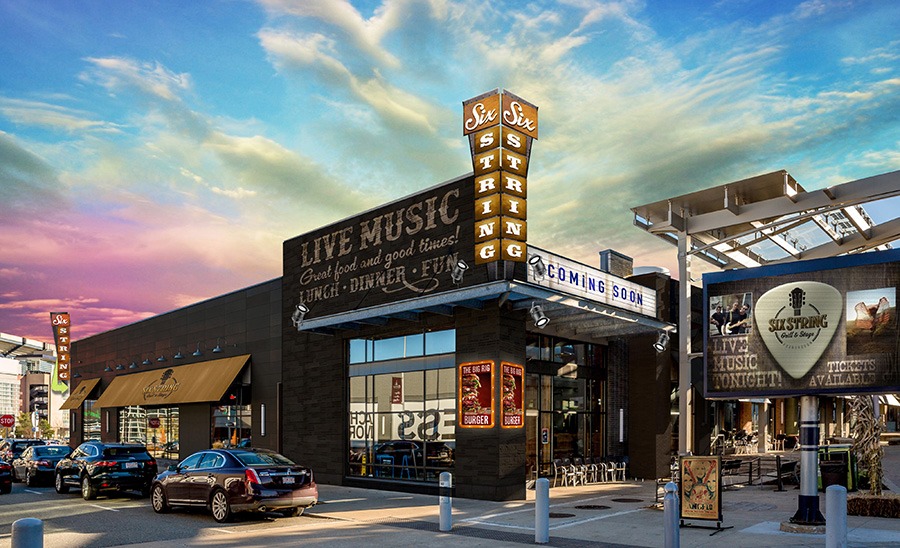 The Briar Group owns and operates more than a dozen restaurants and bars around Boston, including the Harp on Causeway Street, Brighton’s Green Briar Pub, Glass House in Kendall Square, Anthem Kitchen and Bar in the Seaport, and more. At Six String, the company promises to “deliver on inventive” dishes inspired by American and Southern cuisine, plus an 80-seat bar serving up “creative and well-made cocktails” and 16 draft beers.

The space will be outfitted with screens and TVs for optimal Patriot Place pre- and post-gaming, but the venue will also feature local and touring musicians live on stage. The Briar Group is working with a promotion outfit called DFTR on the entertainment. DFTR is comprised of partners Mike Mushok, a member of the multiplatinum band Staind; Boston concert promoter and Thunder Road Rock Club owner Dan Millen; and Dennis Callaghan, a 20-year radio and concert industry veteran who has worked with contemporary country artists like Jason Aldean and Old Dominion. Expect dance floors and “plenty of VIP private viewing,” plus room to reserve private functions with the Briar Group’s events company. The former Toby Keith’s, which was open since 2011, hosted performances every Thursday, Friday, and Saturday night in Foxboro.

When Toby Keith’s closed in January, the former country bar owner said in a statement to the Boston Globe that Patriot Place had been “greedy,” and that “we were effectively kicked out.” Patriot Place said the two parties “mutually agreed” to terminate the franchise’s lease.

In a press release today, Patriot Place vice president and general manager Brian Earley said, “We are thrilled to welcome the Briar Group and its stunning restaurant and live music concept. Six String will be committed to bringing a high-quality entertainment and dining experience to our guests and we are excited to see how the team is able to transform this venue and deliver an experience that will cater to all music fans.”

Six String plans to open later in 2019, first for lunch, dinner, and nightlife. Weekend brunch and special events are also in the plans. Stay in the loop on Instagram, Facebook, and Twitter.