Here’s Why Karen Akunowicz Is Hosting the Women of Food

The Fox & the Knife chef is bringing the city-hopping series, and a fellow leading lady, to South Boston. 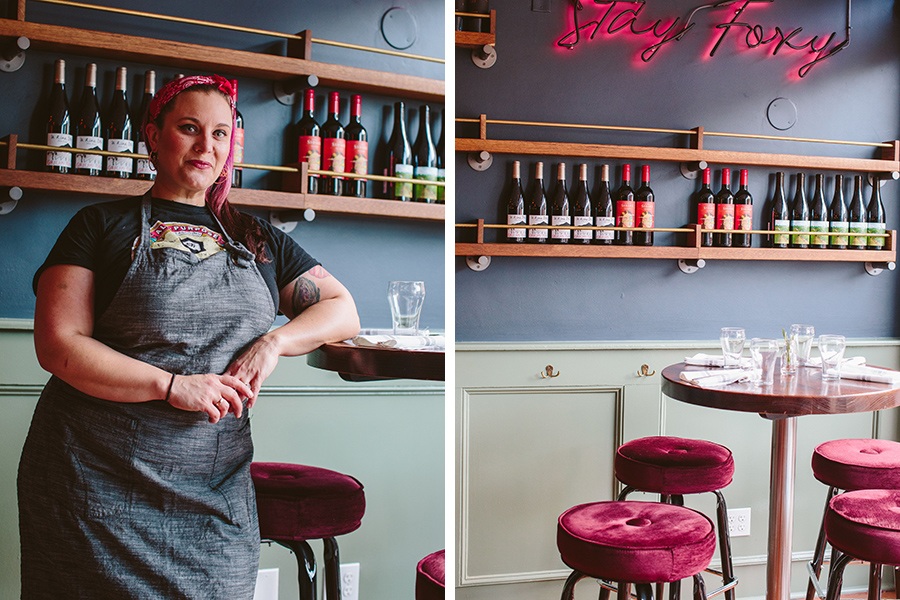 When the phone rang asking Karen Akunowicz to host the Boston stop on a cross-country tour of female-led restaurants, the chef said yes—even though Fox & the Knife had barely just opened and it was packed every night. But she couldn’t pass up the opportunity to invite another chef she greatly admires to her city—or the chance to introduce her staff to another female leader’s style of cooking and hospitality. Resy’s Women of Food series stops in South Boston on Tuesday, April 16, for a dinner called Modern Matriarchs, in collaboration with James Beard Award-nominated chef Kate Williams.

The Fox & the Knife owner is a big fan of Williams, whose Detroit restaurant, Lady of the House, takes inspiration from the generous spirit of the capable women who showed her how to cook and host. Lady of the House updates the idea of a Midwestern dinner party with a zero-waste philosophy and biodynamic wines, and it has earned much acclaim since opening in 2017, including Beard nominations for Best New Restaurant and for Williams as Best Chef: Midwest, and spots on Esquire and GQ’s Best New lists.

“There are similarities in our restaurants,” says Akunowicz, who earned Best Chef: Northeast while she was leading the kitchen at Myers + Chang. It’s not just that both places are female-owned, she continues, but that both are very modern restaurants rooted in a traditional thing—the idea of the warm, motherly hostess throwing the party every night. The theme describes two owners who are changing what the word “matriarch” means, Akunowicz says.

Not that Fox & the Knife needs to call an event “modern matriarchs” to demonstrate that it’s not a boys’ club-of a restaurant. Akunowicz, a queer femme, co-owns it with her spouse, LJ, who is gender non-conforming—and there’s an all-female management team and kitchen line, including chef de cuisine Molly Dwyer, sous chef Tessa Bristol, general manager Alexandra Hayden, and assistant GM Lydia Shilland. The restaurant’s small kitchen is located in the middle of the dining room, so those women are in the spotlight all night. Representation is important to Akunowicz, but she notes that it was only women who applied for leadership positions at her restaurant. (Men work as servers, bartenders, prep cooks, and dishwashers at Fox & the Knife.)

“What I heard time and time again was that women were excited about working at a female owned-and-operated restaurant,” Akunowicz says. “Many people said they were looking for a change of work environment, and were hoping that this was.”

The people at Resy, the online reservation management system that Akunowicz chose for her restaurant, also noticed the culture building at Fox & the Knife, which is why they reached out early about the Women in Food series. It launched last year, with a one-off event hosted by Dominique Crenn, based on the company’s “desire to use its network to spotlight trailblazing female chefs.” This year, the tour continues for seven consecutive weeks in Los Angeles, Atlanta, Boston, Chicago, Nashville, New York City, and Washington, D.C., kicking off April 2 in Los Angeles, with Sqirl chef Jessica Koslow and chef Gabriela Cámara of Contramar in Mexico City and Cala in San Francisco.

Tickets are currently still available for the Boston stop. But if this dinner sells out, there are other girl-power parties coming up at Fox & the Knife. Fresh copies of the new journal, Smash the Garlic and the Patriarchy, featuring contributions from dozens of by local food-scene leaders, including Akunowicz, are on sale now at the restaurant and online. And on Thursday, March 28, during apertivo hour (4-5:30 p.m.), the foxes host Kelley Fox of Kelley Fox Wines for a casual wine tasting. Reservations are encouraged by not required, and wine tasting tickets are $25.