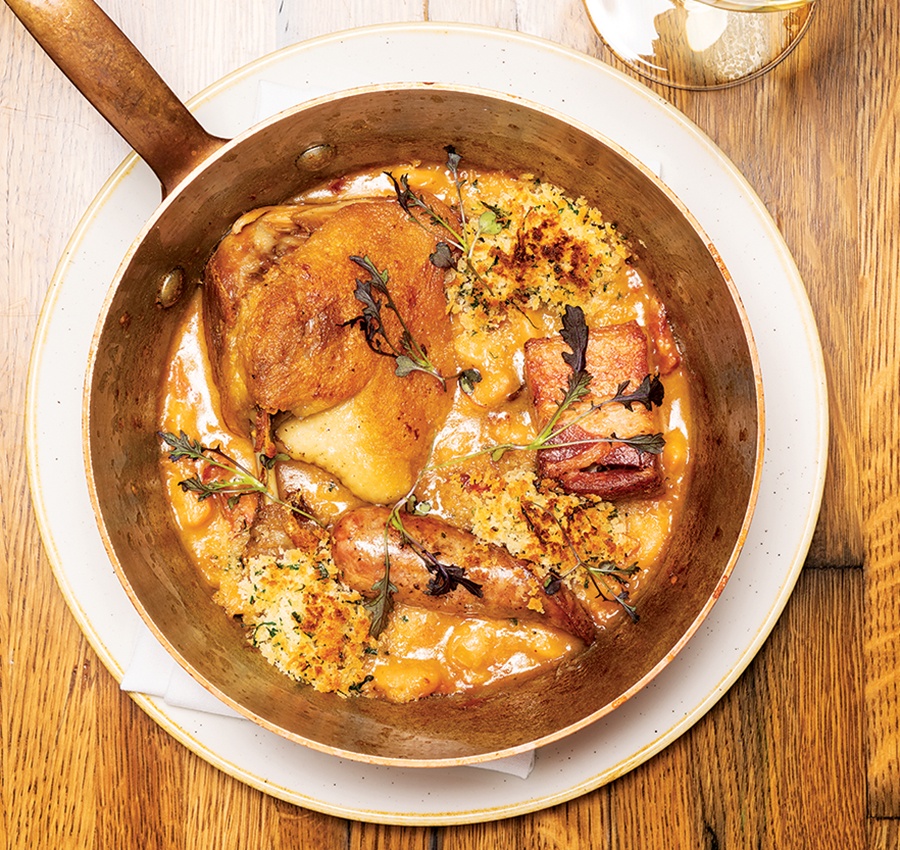 Curnonsky, the 20th-century culinary writer and pioneering prince of food tourism, once dubbed Lyon the gastronome’s world capital. Not an unfair judgment. The capital of the Auvergne-Rhône-Alpes region in southeastern France brims with Michelin-starred restaurants and gave us the late chef Paul Bocuse, father of the nouvelle cuisine that defined the past century of fine dining. The lasting pillar of Lyonnais cookery, though, is that haute movement’s cultural opposite: le bouchon.

Bouchons, eateries underpinned by traditional home cooking and impervious to modern food trends, were established as hubs of hardy fare to fuel 17th- and 18th-century silk-industry laborers through a grueling workday. At the turn of the 20th century, the most popular bouchons were run by women, ex-cooks of bourgeois families who were let go in the cash-strapped period of the Long Depression. The history of the bouchon, like its food, is rich—and indelible.

In an industry prone to trend-chasing, Bar Lyon, an intimate new restaurant in the South End, revels in this storied past. I wondered why Columbus Hospitality Group, the heavyweight team behind local restaurants such as Mistral and Teatro, looked to the bouchon for its latest act of food-as-storytelling, and I’ll hedge that the reason is simple: They can do it incomparably well. The cozy, 60-seat Lyonnais enclave is woven with elegance but not demanding of it. The food is lovely. The French-focused drink menu is simplified and sublime. And here’s the true pleasure of dining at Bar Lyon: It’s a lesson in expert hospitality, without fanfare.

Once again, chef-owner Jamie Mammano has trained his Columbus crew to create a respite of warmth. I mean this literally, too, from the warmed plates for sharing entrées, to the winking candles that glimmer off copper pots hanging supine by the open kitchen, to the café curtains and coffee-hued tables that warm up French-style ceramic tile. Apéritifs are scrawled on a mirror behind the zinc bar; on one evening, the Celtics game played soundlessly on a tiny television in the far-left corner. It’s not the hot-towel hospitality of the group’s swankier offspring, and for a bouchon, it shouldn’t be. It’s a place where I’m free to lick my fingers clean of the warm, bacon-studded gougères ($5), even though silverware is changed between courses.

To start, I melted into a buttery leather booth and tore a hunk from the warm table bread—a whiff of fermentation biting back from its craggy, sticky crumb. I swiped tempered, cultured butter fringed with coarse salt into the country loaf’s nooks and considered whether woman could live on bread alone. 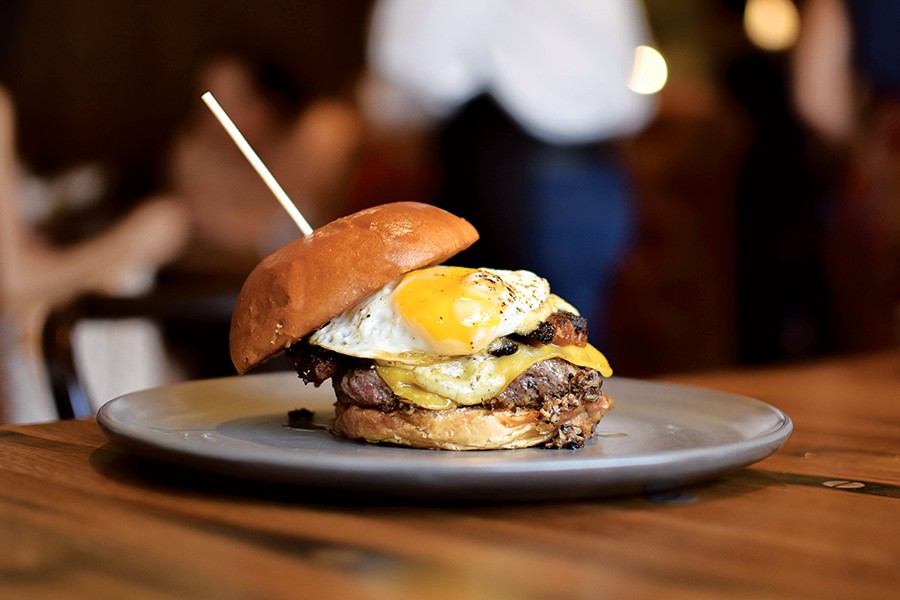 Bouchons don’t skimp on the lovely French fats, nor does Bar Lyon. And yet the kitchen’s brighter accents—tangles of herbs, hits of acid, spot-on seasoning—happily balanced the lush undertones of butter, schmaltz, and cream. Escargots ($14) came nestled in a cast-iron cooker, fat and drunk on garlicky butter verdant with parsley—a foil, not a mask, for their pleasant punch of earthiness. Cold, crisp boats of endive in chardonnay vinaigrette ($12) were stacked Jenga-style with coils of watercress over thick nubs of Roquefort cheese. Classic quenelle de brochet ($21 for two), Lyonnais pike dumplings, seemed held together by sheer will, lounging among crayfish tails in a saffron-colored bath of lobster velouté. A ceramic pot of chicken liver pâté ($11) was ethereal smeared on toasted ciabatta with a cap of red onion jam.

Larger plates also bridge comfort and flair. Maine scallops ($24) contrasted the tawny crust of a good sear with a pillowy perch of white-sweet-potato purée. Accoutrements for “Le Burger” ($16) were a cheeky Lyonnais-Boston hybrid: mushroom duxelles and tarragon aioli paired with American cheese and a sunny-side egg. Butterflied trout ($22)—pan-seared until the crispy tail crackled—wove brown butter with a welcome thread of capers and lemon. The cassoulet ($25), served straight from its copper saucepan, was a beautiful beast of a dish: snappy-skinned Toulousaine sausage, a wedge of pork belly, and one fork-tender confit duck leg collapsing into breadcrumbs and Tarbais beans with an undertone of sweetness, a subtle nod to the Boston-baked kind. A trim dessert list, meanwhile, highlights studies in pastry technique: crème caramel ($7) and chocolate mousse ($9). The mousse, with a nubbly coat of fleur de sel and cocoa nibs, was the clear winner.

The Lyonnais-Boston amalgam is furthered on the beverage side. Glass pours of wine stick with France, from a ruddy Côtes du Rhône ($12) to a Crémant de Loire ($14) that tasted the way candlelight feels. Cocktails such as the Malédiction ($14)—lime, green Chartreuse, and maraschino brooding with the botanical spirit Escubac—were refined yet creative, recipients of suave Gallic whimsy. The beer list flaunts Boston, showcasing local breweries like Night Shift, Aeronaut, and Naked Ox. 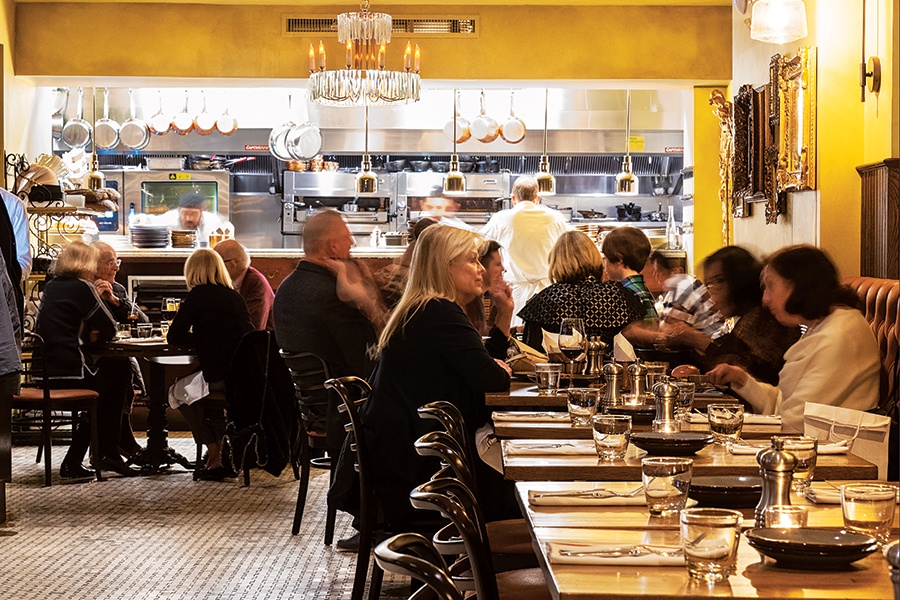 There are quibbles, but they are minor. The narrow floor can cause traffic jams between servers and guests waiting to poach bar seats. I searched my Lyon Salad ($10) for the promised pickled beech mushrooms, wishing for more than the lonesome few. And though the omelette ($15) would have made Bocuse proud with its perfectly baveuse curds, it was heavy-handed with the buttery, bloomy triple crème cheese in its folds.

Really, though, it just feels good to be at Bar Lyon, a space somehow transporting and entirely of its South End location. On the lip of Massachusetts Avenue and Washington Street, it’s a focal point in a corner of the neighborhood where skyrocketing rents meet the Methadone Mile. More than 20 years ago, Mistral helped pioneer the resurgence of a once-sparse Columbus Avenue. Perhaps this graceful, smaller-scale sibling will become another bright-burning beacon, as considerate of the people who live and work nearby as it is of the inspired appetites traveling from afar. I wouldn’t be surprised. Accolades make restaurants popular. Genuine warmth makes them last.