Trillium Brewing Is Opening a Greenhouse-Inspired Taproom in the Fenway

Plus, the flagship brewery is relocating to a huge new site in Canton. 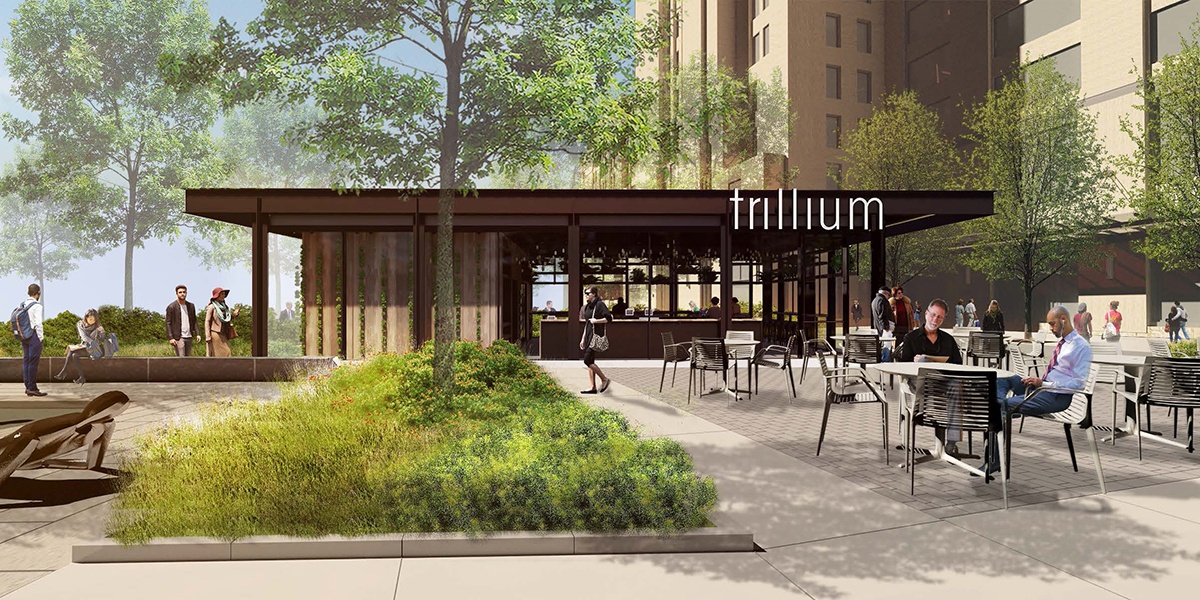 From the vantage point of their soon-to-open-for-the-season rooftop of their new Fort Point brewery, Trillium Brewing Co. has its sights set on another iconic neighborhood of Boston: The beermakers just announced plans for another new taproom in the Fenway, a year-round, “greenhouse-inspired” venue opening this summer near the landmark 401 Park building. And that’s not all the news from Trillium today: The company also confirmed that it will move its flagship brewery in Canton to a much larger headquarters in town, adding a new restaurant to the mix and establishing what they’re calling “our Forever Home.”

After JC and Esther Tetreault established their family business in a tiny warehouse in Fort Point in 2012, Trillium moved operations to a Canton industrial park and opened a taproom there in 2016. The team pretty much immediately grew out of it, letting fans know in a new blog post that they currently operate out of four separate facilities on Shawmut Road to manage all of the brewery’s guest-experience, production, barrel-aging, laboratory, warehouse, and office needs.

Trillium is moving into nearly 140,000 square feet of space at the former Reebok headquarters; their current place in Canton is 16,000 square feet. Located just off 93, the new venue—which is where the brewery hosted its first-ever beer fest last summer—is set on 19 acres, which will allow for not only more room to make beer, but also a more “convenient and inviting” taproom for customers and employees, a restaurant, outdoor patio, and event space.

“All this will happen adjacent to a streamlined, modern brewery that will keep our production team together creating boundary-pushing beers,” says today’s announcement.

Moving isn’t imminent. The team plans to gradually build out the new space in Canton, and relocate operations piece-by-piece. The Shawmut Road taproom and patio will be open, as usual, this summer.

And if construction stays on track, so will a brand-new taproom in the Fenway. Trillium is working with neighborhood developers Samuels & Associates on the brewery’s first-ever ground-up construction project, creating a new, 1,500-square foot structure adjacent to the forthcoming Time Out Market. The space will serve beers on draft, and also sell beer to go. Guests will be able to bring in food from the neighboring food hall.

Architecture firm Studio Troika is designing the “greenhouse-inspired space,” with retractable glass windows to open it up during the warmer months.

“In addition to the design of Trillium Fenway, we love that it’s conveniently located and public transit accessible, open year-round, and nestled into a historic area that is constantly bustling with sports, arts, and cultural activities,” Team Trillium says in the blog post, noting also that the married cofounders met in the Fenway neighborhood and “became the young dumb couple in love that started a brewery together.”

Trillium Fenway is on track for a late summer 2019 opening. That timeline doesn’t necessarily mean that beer fans can’t sip pints of Fort Point Pale Ale in a grassy, natural setting this summer: Trillium won’t confirm if it plans to operate the Garden on the Greenway for the third season (though it did just reactivate a dormant Facebook page with a fresh new photo). The company promises more information on the Greenway Garden in the coming weeks. You know we’ll keep you in the loop, dear readers.

Regardless, the existing venues by the busy beermakers offer a breath of fresh air. In addition to patio seating outside the first-floor restaurant on Thompson Place, Trillium has a third-story roof deck there; and the company is also getting ready for the second season of the outdoor bar and patio at the current Trillium Canton. (Trillium also purchased land in Connecticut in 2018, with plans to establish a farm-brewery there and eventually, host some events. This spring, they will start growing crops at the farm to use at the restaurant in Fort Point, the company tells Boston.)

Trillium’s rapid rise has not been without growing pains. Shortly after opening the Fort Point restaurant this past fall, the company faced backlash from fans over employee pay, and subsequently announced a $15 minimum wage for its workers.

Needless to say, these last six years have been a learning process. That’s why Trillium is making such big news today. “We have the opportunity to create spaces, learning from our growth over the last six years, to create a really great work place for our team and a more fun and comfortable experience for our guests,” Esther Tetreault says.

Cheers to that. Stay tuned to @TrilliumFenway and @TrilliumCanton for updates on the latest projects.