This spring will be the third season for the open-air beer bar at Rowes Wharf. 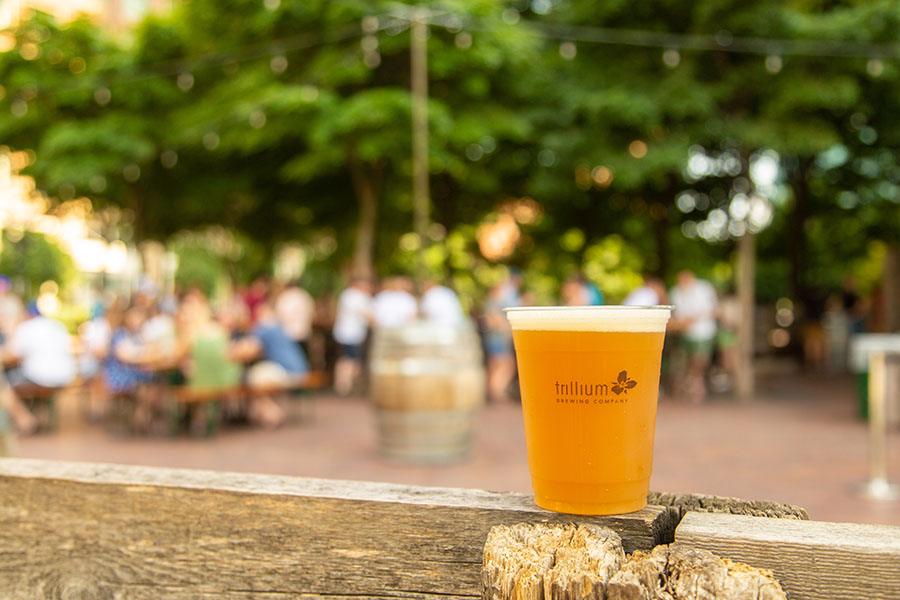 UPDATE, May 1, 12:30 p.m.: The Garden on the Greenway is on the way: Trillium debuts its open-air beer garden for the season on Thursday, May 16, at 2 p.m., the Greenway Conservancy just announced. Elsewhere in downtown Boston’s mile-and-a-half-long public park, City Winery on the Greenway opens tonight at Dewey Square. Happy beer garden season, everyone.

The new “greenhouse-inspired” Trillium taproom in the Fenway probably won’t open until the twilight of summer—but beer drinkers will be able to sip Super Soak and the Streets amongst the greenery much sooner than that. Trillium just confirmed its popular Garden on the Greenway will return for a third season.

“After a couple of incredible seasons on the Greenway we can’t imagine summer without the Trillium Garden,” said Trillium cofounder Esther Tetreault, in a press release.

In partnership with the Rose Kennedy Greenway Conservancy, the beer garden is located on a brick patio, across Atlantic Avenue from Rowes Wharf. Trillium outfits the area with beer hall-style benches and tables, repurposed barrels as standing-height tables, rustic fencing, and a custom-built draft trailer-bar. The dog-friendly beer garden has portable restrooms, and typically a food truck or two parked nearby. Guests can bring their own food into the beer garden.

“[The Conservancy’s] commitment to fostering shared spaces and community-building is perfectly aligned with our values and we’re proud to support their initiatives through the Garden on the Greenway,” Tetreault said.

Trillium’s open-air beer garden was downtown Boston’s first when it debuted in 2017. (Aeronaut started its outdoor residency in Allston in 2016.) Since then, the brewery has expanded its production capacity with the addition of a Fort Point restaurant and brewery, as well as growth at its Canton headquarters. This year’s Greenway draft lineup will reflect that with a wider variety of beers available, including summer-friendly lagers, and rotating “Fresh Press” selections. Think of these as shandies for today’s thrill-seeking palates, combining Trillium wild ales with fresh-pressed juices in flavors like cucumber-pear, strawberry-watermelon, and watermelon-mint. Alongside a rotating selection of hoppy ales and New England IPAs, farmhouse styles, dark beers, and sours, Westport Rivers Winery will again have wine on tap.

After the Garden on the Greenway’s first season, last summer saw a number of other new outdoor drinking spaces, including a second Greenway “drinkery,” Downeast Cider at Dewey Square; an Esplanade outpost of Night Shift Brewing; a Castle Island bar at Charlestown’s Constitution Wharf; and others.

They haven’t been without controversy. Arguing that the trendy spaces unfairly cut into its members’ bottom lines, the Massachusetts Restaurant Association has pushed to rein in the beer garden trend, backing a bill at the State House that would limit the number of days they can open, and calls for new restrictions on where and when they can be set up.

While new regulations for beer gardens on public land might be coming down the line, the pushback isn’t affecting this season’s kick-off. The Wachusett Brew Yard returns to the Patios at City Hall Plaza beginning May 2. In the South End, the SoWa season starts again on May 5, with a Craft Collective beer garden in the Power Station every Sunday. Elsewhere on the Greenway, Boston Calling Block Parties presented by Crash Line Productions will return to Dewey Square on Thursdays and some Tuesday this summer, a representative confirms, though an announcement is yet to come about this year’s plans for the full-time Dewey Square Drinkery.

Trillium is watching the weather to determine when the Garden on the Greenway will open for the season; stay tuned for that date (it’s historically been in late May), plus more beer garden updates as the weather improves.