Get ready to rosé all day at Dewey Square. 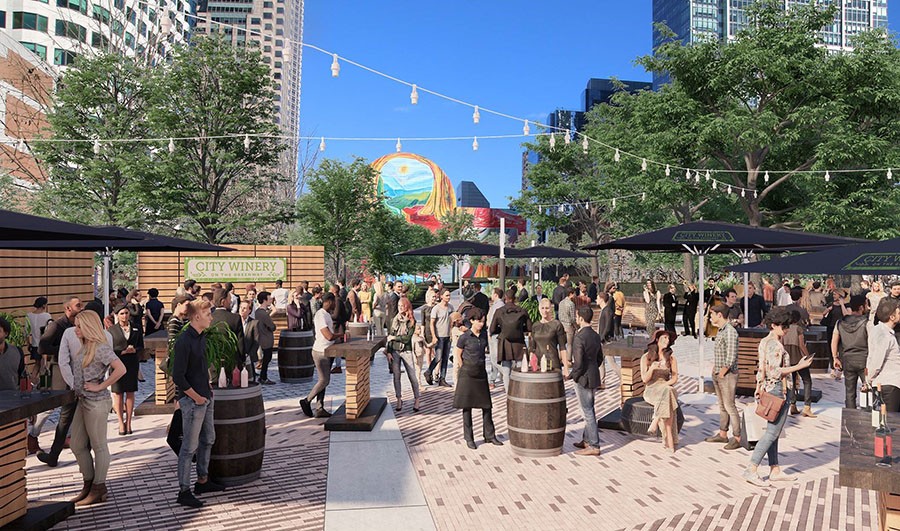 Wine Garden on the Greenway rendering courtesy of City Winery

UPDATE, May 1, 12:30 p.m.: Happy Wine Wednesday, everyone! City Winery on the Greenway debuts today at 3:30 p.m., and is planning a grand opening party for Wednesday, May 15. Boston’s first dedicated open-air wine bar is now open for the season every Wednesday and Friday from 3:30-10 p.m., Saturdays from 1-9 p.m., and Sundays from 11 a.m.-7 p.m. Meanwhile, its neighbor, the Trillium Garden on the Greenway, is on track to debut Thursday, May 16. It’s officially outdoor drinking season, and we are here for it.

We’ll have beer gardens a-plenty this season, but it looks like 2019 might just be Boston’s summer of the wine garden: City Winery will operate the city’s first dedicated open-air wine bar at Dewey Square this summer, the Greenway just announced.

City Winery, which has seven venues around the East Coast and Midwest, makes wine in-house at a location near the TD Garden. It’s also a full-service bar and restaurant, with live music, arts, and events spaces.

On the Greenway, the company is bringing multiple different white wines, reds, rosés, and a few Harpoon Brewery beers and cider to serve on draft, plus a menu of charcuterie, cheeses, olives, and nuts. It will host low-key (read: free) live music in a family-friendly environment, says City Winery chief growth officer, Avi Kent.

“We can’t wait to bring what we do at our existing Boston location with wine and food to The Greenway, reaching a whole new audience of locals, downtown workers, and visitors throughout the warmer months in Boston,” Kent said in a press release.

The Rose Kennedy Greenway Conservancy, which manages the public park (that used to be an elevated highway) in the heart of Boston, is primarily privately funded. Pioneering in the beer-garden sphere has proven to be a good revenue source: In its inaugural year, the Trillium Garden on the Greenway brought in $150,000 for the non-profit. That partnership is headed for its third season, with a variety of Trillium beers and a selection of Massachusetts-grown wines from Westport Rivers Winery.

(Meanwhile, the Massachusetts Restaurant Association has pushed to rein in the beer garden trend, backing a bill at the State House that would limit the number of days they can open, and calls for new restrictions on where and when they can be set up.)

The Greenway Conservancy sees the the wine bar as “[building on our] history of bringing new innovations to Boston,” says Samantha McGinnis, the organization’s director of programs and earned income.

While it’s never gone out of fashion, wine is having a cultural moment, as environmentally minded winemakers around the world are letting loose; and funky, friendly wine bars like Haley.Henry and Rebel Rebel are making it feel more accessible than ever to explore the vino scene.

City Winery is also an appealing partner for the Greenway, McGinnis adds, because it minimizes packaging and waste by serving 80 percent of its locally made wine on tap. “We’re excited to work with a sustainability focused local partner like City Winery to build an iconic Boston destination this summer in our contemporary public park.”

The Dewey Square drinks garden debuted in 2018 with Downeast Cider. This season, the location will get rearranged a bit, still situated on the brick patio where food trucks congregate, but with the bar area located closer to the wall. Like City Winery’s brick-and-mortar locations, the wine garden will use rustic woods and repurposed wine barrels in its décor to “evoke the romance of being in wine country.”

City Winery on the Greenway will operate Wednesdays, Fridays, Saturdays, and Sundays from May to October. Stay tuned for an opening date.