A bold-for-Boston Japanese restaurant is a polished, if imperfect, exercise in ambition. 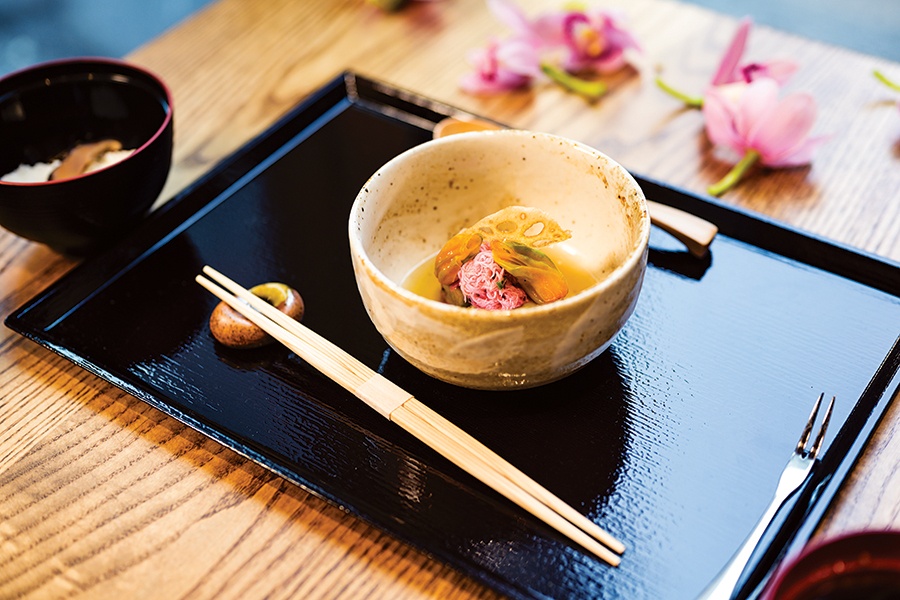 Multicourse menus featuring super-seasonal dishes such as a fried Jonah crab cake are the main attraction at Kamakura. / Photo by Michael Prince

A single oyster escabeche, marinated overnight and topped with tiny cubes of dashi gelatin and pearls of Belgian caviar, arrives on a porcelain plate flanked by fresh, tender Brussels sprouts ohitashi and a lacquer-red pickled bayberry. Morel mushroom stuffed with chicken, a warming winter coat of earthy and savory notes, appears atop a bright-green purée of ramps—a promise of spring’s arrival. It’s followed by three jewel-like pieces of sushi, each one a fish hooked at its prime.

Seasonality is the basis of multicourse kaiseki dining—and so it goes at Kamakura, a compact, three-floor Japanese restaurant named for executive chef–owner Youji Iwakura’s hometown. An authentic kaiseki meal is more than just a series of Japanese small plates; it is an ultimate expression of washoku, the traditional cuisine of Japan. From its centuries-old origin as a minimalist complement to Buddhist tea ceremonies, kaiseki grew increasingly epicurean while maintaining certain aesthetic ideals. Every element—even the tableware—is chosen to evoke the best of the present moment, and dishes follow a progression of techniques including simmered, grilled, and steamed preparations of ingredients at their seasonal peak. In a city whose limited idea of Japanese food too often toggles between ramen and sushi, the menu here offers much to discover.

But does the food itself stand out? Iwakura sets a high bar for himself: Formerly chef de cuisine at Ken Oringer’s lauded Uni, he went on to serve as opening chef for Basho Japanese Brasserie and Snappy Ramen. His Kamakura sets a price point as high as the surrounding Financial District towers. With those expectations attached, the restaurant must deliver mightily—and it does, sometimes. Iwakura’s dishes are exceptionally beautiful, and mostly very good, occasionally excellent. But they’re not uniformly so. 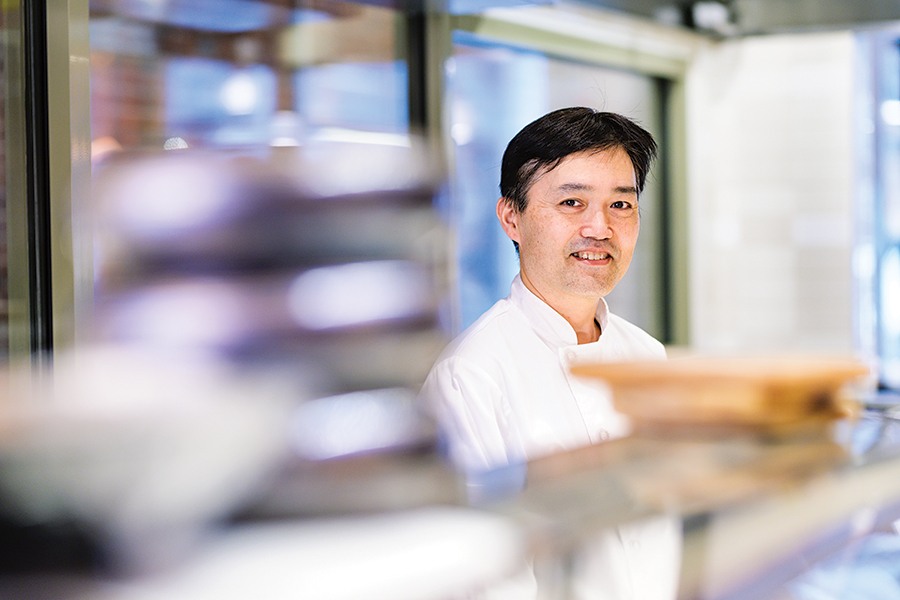 In other words, while Kamakura has the potential to help Boston’s dining scene take a big step forward, the restaurant itself has a little farther to go.

It certainly sets a lovely scene. The space is not one that demands elevated attire, but it wouldn’t feel out of place at the eight-seat kaiseki counter that dominates the downstairs; in the second-floor dining area, with its warm, polished palette of brick, marble, and medium-dark woods; or in the stunning rooftop lounge, separately branded Kumo (we took a glimpse, though it was not then open to the public).

After all, one pays a pretty penny for the seven-course cha-kaiseki menu ($122). On one visit, the first round brought out three small plates: citrusy kombu-cured sashimi with okra; a rich red miso soup with a littleneck clam; and an “umami rice bite” featuring a finger-size marinated mushroom; its depth of flavor still lingers in my dreams. Next came a lightly fried Jonah crab cake topped with more fresh crustacean meat and a slice of lotus root nestled in a small pool of savory dashi broth that tempted us to lick the bowl clean. So far, quite good.

The eagerly anticipated grilled course of American Wagyu strip loin with daikon, miso, and dashi butter, however, proved underwhelming. Perfect cooking and pairing couldn’t elevate the tender but mild-tasting beef to the height of the preceding dishes. I’d trade the steak for more of the delightful unagi (freshwater eel) that topped the next dish: chawanmushi custard tempered with a tare sauce and blood-orange zest.

Other offerings were pleasant but unremarkable, including the “Ocean and Garden,” which paired two pieces of hamachi pastrami with a tempura-fig-and-sesame sauce. It was beautifully composed on a tray of dark-gray slate, but—like the small tray of wagashi sweets and cup of stone-ground matcha that concluded the meal—light enough that heartier appetites may wish for one more course. (It’s worth noting that many of the kaiseki dishes were among the à la carte options, too.) 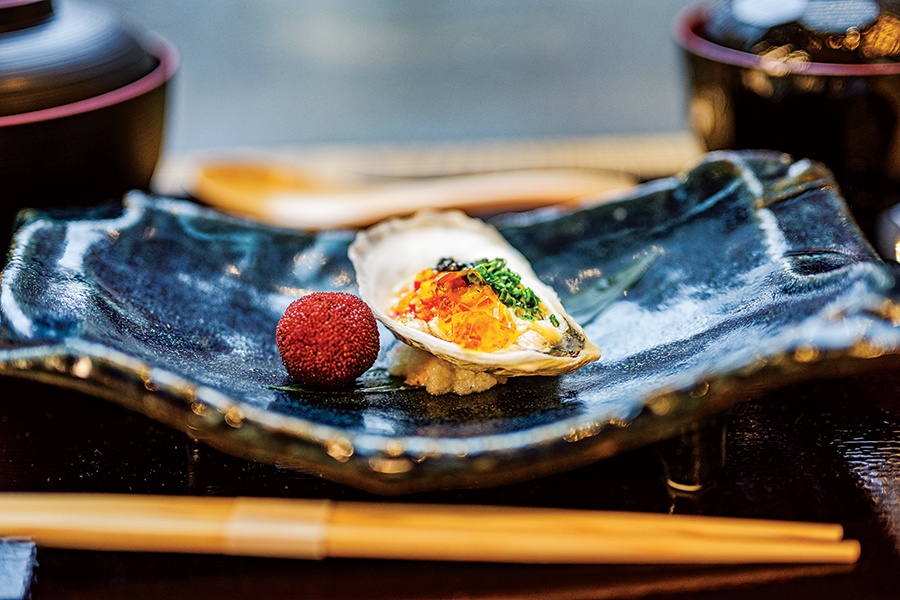 Multicourse menus featuring super-seasonal dishes such as oyster escabeche are the main attraction at Kamakura. / Photo by Michael Prince

Then again, guests can always upgrade to the full 10-course kaiseki menu ($156), which follows a similar structure as the cha-kaiseki but adds a few more elaborate flourishes. The results, though, are still mixed. There was a bit of fanfare when a waiter opened a black lacquer box to reveal a bright-red interior with eight tiny slices of top-notch sashimi—duos of bluefin tuna, salmon, Spanish sea bass, and shima-aji—accompanied by nano-ribbons of pickled vegetables. The sushi course presented wonderful, progressively richer selections of yellowtail topped with citrus and wasabi, scorpionfish with a flourish of uni, and chutoro, lusciously fatty tuna. But when the fish-and-cake followed, this time with seared shishito pepper and a shoyu broth, the latter was so salty it burned my lips.

Some of the speedy servers were clearly more comfortable than others with explaining the complex dishes, but all were expert guides for navigating the superb sake list. (There are winning cocktails, too, such as the seasonal dashi-infused “Dashing for the Rising Sun.”) And while taciturn behind the counter, the chef himself proved his attentiveness: When Iwakura overheard me explaining to my companion that I’m generally unenthusiastic about scallops, he promptly passed a plate over the counter. His gift: two thin slices of scallop sashimi dressed lightly with soy and a sliver of black truffle. He hoped to convert me. I confess: 10/10, would eat again.

Would I eat at Kamakura again? It depends. Coursed dinners for two can rapidly approach the $500 mark with tip, a shogun’s ransom for an admittedly singular experience that somehow still felt like a work in progress. And yet, Kamakura is—in concept and execution—an extremely ambitious restaurant by Boston’s conservative standards, and Japanese-cuisine aficionados will enjoy its thoughtful presentations. The kitchen may just need a bit more time to bloom. Seasons change. Kamakura might, too.