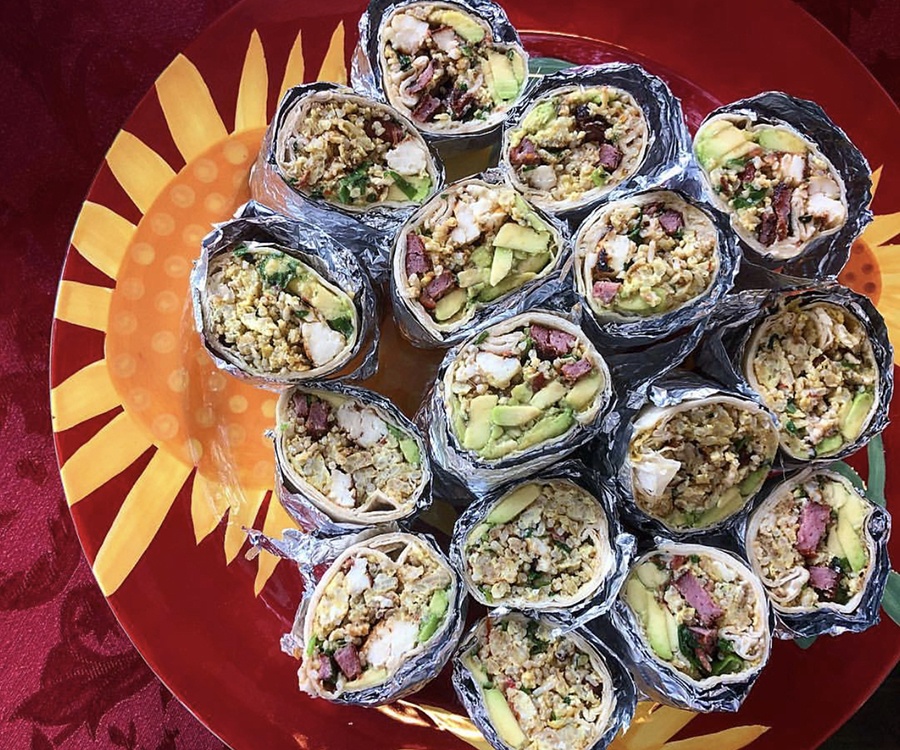 Michael Scelfo shares a first taste of his new pop-up, Mision Burrito, at Harvard Square’s Mayfair on May 5. / Photo

With three restaurants in Harvard Square (and even more culinary ideas bouncing around in his head), chef Michael Scelfo knows as well as anyone just how hard it is to hire and retain staff in the restaurant industry these days. That’s one of the main reasons he’s launching his latest project this Sunday, a pop-up called Misión Burrito: Through a network of partnerships with local social organizations and shelters, Misión Burrito endeavors to provide opportunities and job skills to folks who are socially and financially at-risk.

Scelfo, a Best of Boston chef, opened Alden & Harlow five years ago–followed by Waypoint and, most recently, Longfellow Bar. He says he’s looking to give back to the Greater Boston community that has given him so much success. Hence the mission-driven Misión Burrito.

“When I opened Alden, my goals were to open a lot of restaurants. I still plan to open more restaurants, but as time has gone on, I’ve seen the challenges of maintaining the quality of three restaurants,” he says. “We have such a hiring shortage on this city, and such a problem with finding and developing talent in our community. What if there was a way to bring people in who really need a chance to learn a skill?”

The idea is not just to teach people how to braise meats, chop herbs, and roll up burritos, but also to impart skills like resume writing and workplace communication. “There are a lot of different areas I feel like we can impact someone and really mentor someone in the process,” Scelfo says.

Scelfo is also passionate about the cuisine that comprises the Misión Burrito menu. He spent formative years in California, attending high school in the San Fernando Valley, and later living around Santa Clarita, Chico, and San Francisco. The food he loves there is built on high-quality ingredients and depths of flavors, thanks to long roasting and braising times for proteins, and a fresh finish of bright herbs and aromatics.

“It’s an authentic rusticness,” Scelfo says. “I’m taking a lot of that and folding it into where I’m at now [as a chef]. [The menu is] forward-thinking, with some interesting twists, but the emphasis is on simplicity of flavors and the quality of ingredients.”

Check out the small menu below that Misión Burrito will debut this Sunday, May 5, during the 36th annual Harvard Square MayFair. (UPDATE: Mayfair is rescheduled for May 19, but Misión Burrito will pop up as planned at Longfellow Bar.) Scelfo will also be serving up fresh tortilla chips and guacamole, but the core is burritos wrapped in warm flour tortillas.

“I’m super focused on the quality of the [five menu items] we’ll do off the bat, but we’ll see how it evolves,” Scelfo says. He hopes to have at least a couple more pop-ups this year, either at one of his own restaurants or at other locations. He’s looking for places open to hosting a longer-term Misión Burrito pop-up, too. “It would be cool to end up with a small brick-and-mortar,” he adds. “[Burritos are] a niche area of that food that doesn’t really exist here in large quantity, so there is an opportunity for us to put a stamp on that.”

But that’s a few steps in the future. Right now, Scelfo is shoring up partnerships with social organizations, and is looking to make more connections with communities that this business model could benefit, he says. Since announcing Misión Burrito on his own Instagram page over the weekend, chefs and acquaintances from around the country—let alone Boston and Cambridge—have responded with interest, Scelfo says. He plans to announce partnerships as they get inked.

For this Sunday’s first pop-up, his teenage son will be helping out, along with members of Scelfo’s existing management team. “It’s definitely a labor of love to get it off the ground and build community around it,” the chef says.

Learn—and taste—what it’s all about. Misión Burrito is serving out of Longfellow Bar’s kitchen this Sunday, May 5. The bars and, weather-permitting, Longfellow’s patio and roof deck will be open all day. A website is in the works for Misión Burrito, and in the meantime, it’s claimed its place on Instagram at @mision.burrito.

$9 each (All burritos come with cilantro and raw onion)