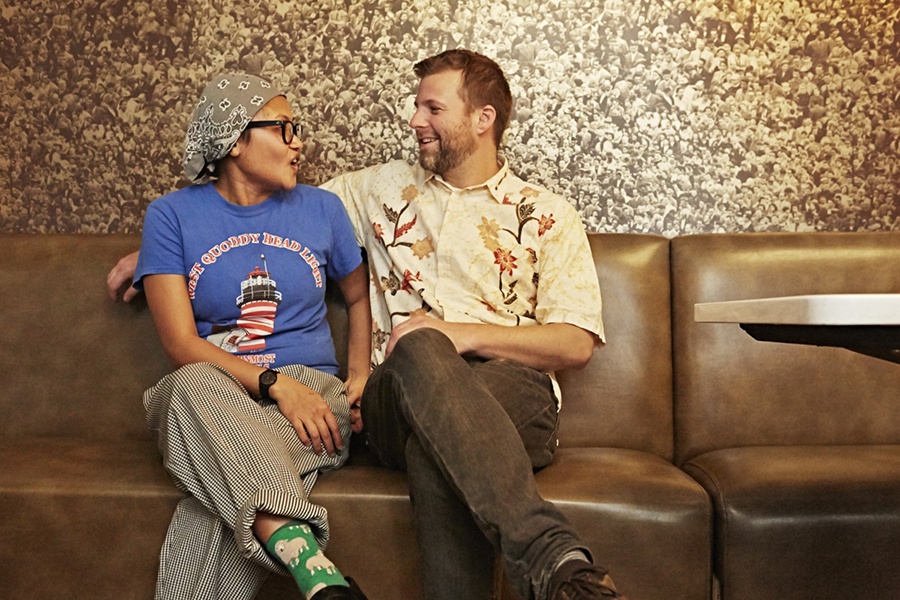 Retno Pratiwi and Peter Gelling take a break from a Kaki Lima pop-up at Mamaleh’s. They are moving to New York this summer. / Photo courtesy of Kaki Lima

UPDATE, May 9, 2:30 p.m.: The dates are on the books for the final Kaki Lima pop-ups around Boston: Mamaleh’s Delicatessen is hosting on Friday and Saturday, June 14 and 15, and KO Pies at the Shipyard will host Monday, June 18.

Say goodbye to a prolific pop-up that was filling the void of Indonesian-focused dining options in Boston. Kaki Lima, a dinner series by chef Retno Pratiwi and Peter Gelling, is bound for New York this summer. The married couple shares the bittersweet news that Gelling is returning to his former career as a journalist and has accepted a job there. The pop-up is going with them: “Retno will continue to nurture Kaki Lima in the same way she did in Boston. We’ll be in a different city, but the mission will remain the same: To introduce high-end Indonesian cuisine to an American audience.”

The couple’s inaugural event was the first of many pop-ups, and even a couple long-term residencies, at chef Sam Jackson’s KO Pies at the Shipyard. (Sorry to bear more bad news, Boston, but do recall that Jackson is also eyeing his exit from Boston.) Kaki Lima was one of Wink & Nod’s culinary residents, and has also regularly appeared at Mamaleh’s in Cambridge. Among other Boston events, it has popped up in New York City, Portland, Maine, and Portland, Oregon; San Francisco, L.A., Austin, and elsewhere. All the while, Pratiwi and Gelling had a goal to open a brick-and-mortar in Boston.

In their announcement today, Pratiwi and Gelling promise they’ll pop up in Boston again someday.

“We are so grateful for all the support from the Boston and Cambridge restaurant communities. We literally can’t do what we do without the generosity of these chefs and owners who are willing to give those of us starting out in this world a chance to develop our concepts,” Pratiwi said in a statement. “I am also so grateful to our customers. I’m always blown away to see so many of the same people time and time again. Your love and support has kept us going all these years. I can only dream of developing such a community in New York. But I’m going to try!”

Kaki Lima, which also caters privately, promises one more pop-up series in Boston before the couple moves in June—stay tuned for those details.