The brewing industry innovators signed a deal they say positions them both for growth. 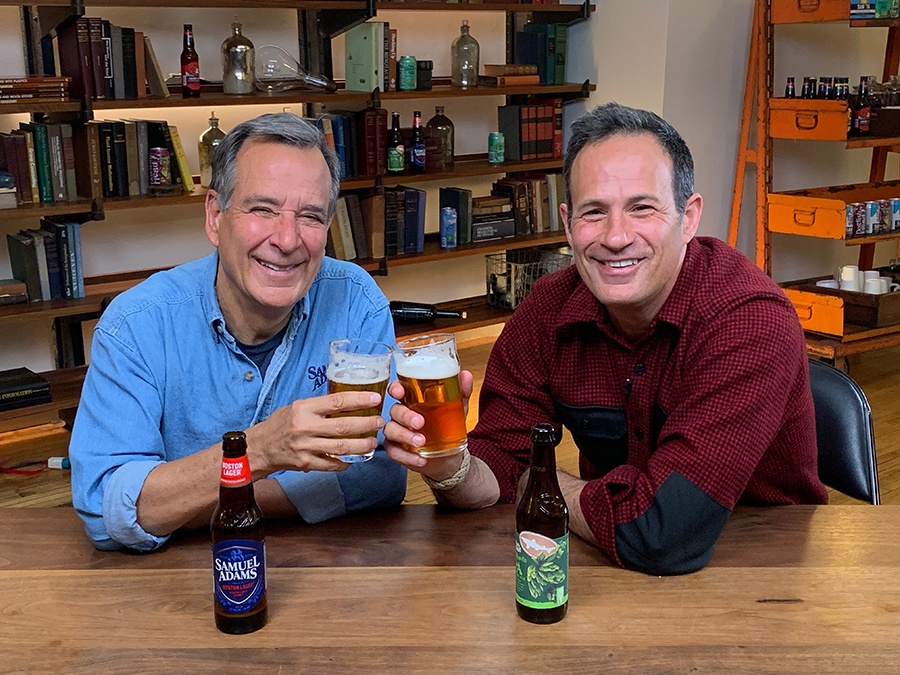 Over pints in Boston this winter, two vanguard craft beer makers—Jim Koch and Sam Calagione—made a deal to merge their companies into a single, independent craft beer juggernaut. Boston Beer Co., the makers of Samuel Adams, and Delaware-based Dogfish Head have signed a merger agreement valued at $300 million, it was announced today.

This means the country’s second-largest and 13th largest craft beer makers, as defined by the national Brewers Association, will combine their brand portfolios, industry experience, and distribution efforts (in markets where it “makes sense,” Calagione told Brewbound).

“Following the transaction, the combined company will have a leading position in the high end of the U.S. beer market, bringing together Boston Beer’s craft beer portfolio and top-ranked sales team with Dogfish Head’s award-winning portfolio of IPA and session sour brands,” reads a Boston Beer Co. press release.

The deal gives Calagione and his wife, Dogfish cofounder Mariah Calagione, more than 400,000 shares of Boston Beer stock, as well as a seat for Sam on the Boston Beer Co. board of directors beginning in 2020. It also allows both companies to keep their Brewers Association-defined status as independent craft breweries, which requires that no more than 25 percent of the company is owned or controlled “by a beverage alcohol industry member that is not itself a craft brewer.” (A few years ago, Dogfish Head sold a 15 percent stake to New York-based private equity firm LNK Partners, but this new deal with Boston Beer Co. will negate that one, Brewbound reports.)

Though it’s a craft-beer behemoth now, Boston Beer Co. began in Jamaica Plain in the 1980s, when Koch first brewed Sam Adams Boston Lager in his kitchen. The company’s brands have grown to include Angry Orchard Hard Cider, Twisted Tea, Truly Hard Seltzer, Marathon Brewing Company, Wild Leaf Hard Tea, and Tura Alcoholic Kombucha, “as well as several other craft beer brands brewed by A&S Brewing, our craft beer incubator.” It has a JP research and development brewery and taproom, and also operates two production breweries in Cincinnati, Ohio, and Lehigh Valley, Pennsylvania. Sam Adams has a taproom in the Faneuil Hall area in the works as well; it could open this summer.

Dogfish Head was established on the Delaware coast in mid-1990s. (Though, Calagione went to high school—and met his future wife—in Western Mass.) From the outset, the brewery has innovated beyond traditional European influence in beers, with extra-hoppy IPAs, barrel-aged experiments, and the use of culinary ingredients. Among the brewery’s awards, Calagione was the 2017 Outstanding Wine, Spirits, or Beer Professional names by the James Beard Foundation. In addition to its production brewery and distillery, Dogfish Head now operates a second brewpub and distillery, a seafood restaurant, and a beer-themed inn in Milton, Delaware.

“Jim Koch and I worked hard with other leading craft brewery founders and the Brewers Association to develop and champion what defines independent American brewers,” Calagione said in today’s announcement. “This merger better positions Dogfish Head and our co-workers to continue growing within this definition for many years to come.” He’s so psyched about it, he said, that the Calagiones reinvested “nearly all” the money they got from this deal back into the new entity.

The longtime professional acquaintances got to talking about possibly merging their companies during this year’s Dogfish-sponsored Extreme Beer Festival, held in February in Boston, Calagione told Brewbound.

“We talked about how challenging the industry is getting, the indie craft definition, brands that consumers think are indie craft, active lifestyle beers, and we discovered how beautifully complementary and not competitive our portfolios were,” he said.

Although combining forces certainly expands the reach of their brands, the duo emphasized their continued craft-beer cred in an open letter posted on BeerAdvocate: “Those larger international beer conglomerates are still more than 50x our size and our combined company’s volume will represent less than 2% of the beer sold in the U.S,” it reads in part. “We are small compared to these Goliaths but together we are heavy.”

The new company will be overseen by Boston Beer Co. CEO Dave Burwick, who joined the beer company in 2018, after leading Peet’s Coffee’s acquisitions of premium coffee brands, Intelligentsia and Stumptown.

The goal is to create a company “that will continue to push forward to drive the next generation of beer innovation and keep powering us to defy convention,” Koch and Calagione said in their open letter. “We look forward to what we can accomplish together, and what beers we can brew for you.”