Watch the Game of Thrones Finale in Boston With Drinks, Drama, and Bar Trivia 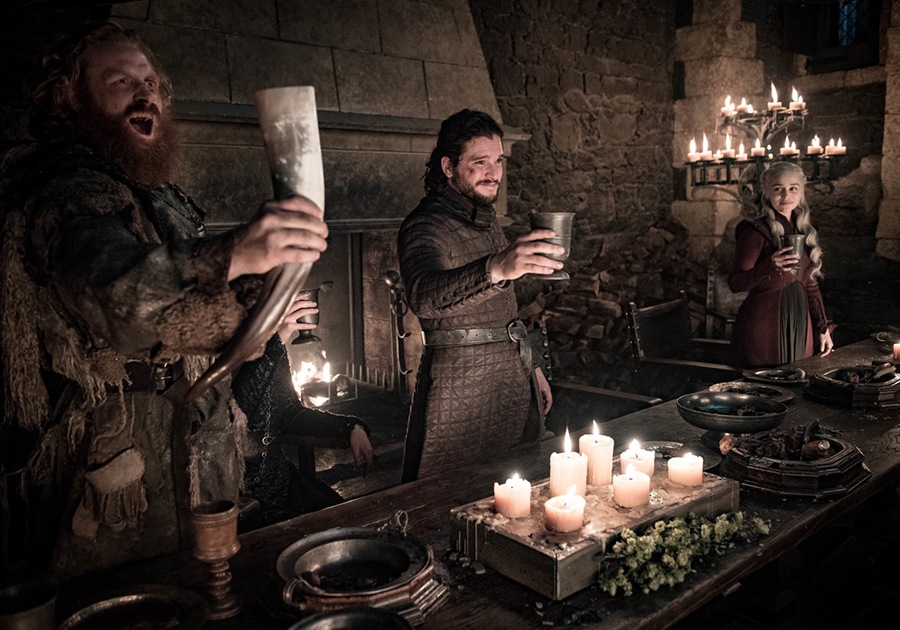 For eight long years, Game of Thrones fans have traversed the Seven Kingdoms and watched with bated breath to see which family—noble or not so—will ascend the throne. This Sunday, May 19, the epic HBO show comes to an end—and we all probably need a strong drink before, during, and definitely after the final credits roll. Once the series ends, will all of our questions be answered? Will we ever trust again? And what in Westeros will we do with all this knowledge of the intertwining story lines? Fill your cup with Game of Thrones-themed cocktails, feast on fare fit for the crown, watch the series finale with a kingdom of friends, and then test your knowledge with themed trivia. Check out these bars around Boston celebrating the end of Game of Thrones.

Throughout this epic season, the back-area lounge at this Union Square hotspot has filled up early with GoT fans vying for seat on one of the comfy couches in front of the large-screen TV. Join them to sip cocktails like Milk of the Poppy, with rum, coconut milk, and chai spices; and a negroni-like Drink Has No Name. The specials—including some themed snacks—are available all night on Sunday, and the show starts, the lights dim, and the sound goes up at 9 p.m.

This small and stellar sports bar is fit for any fandom—and that includes the realm. Get there early on Sunday to get a seat—and catch up on the previous week’s episode, which Parlor airs at 7:30 p.m. And of course, sip Game of Thrones-inspired drinks, like Milk of the Poppy, a clarified milk punch with gin, velvet falernum, rosemary, grapefruit, and green tea, topped with a few dashes of Strongwater lavender CBD bitters—you might need something to help you relax. Three themed drinks are available on Sunday only.

Gather ’round the second floor Sunday evening to watch the end with other fans. The café’s full menu is on, and there is a themed drink special that would warm even the Night King’s heart: Dragon’s Blood Sangria, with robust red wine, fruit, and a dash of fiery cayenne. No tickets required, but seating is limited.

The cool nerds at this Somerville speakeasy have been shaking up Game of Thrones-themed drinks all season long. Pre-game the show with an invigorating Gardens of Dorne, with gin, kleos, lime, and basil; or the Cat’s Paw Dagger, with Irish whiskey, lemon, orange shrub, Amaro di Angostura, and orgeat—it’s refreshing, “and sharp enough to shatter the Night King,” shares owner and bartender Sam Treadway.

It’s the final Sunday for bartender Courtney Slaven’s creative GoT-inspired tipples. Before the show, head to this South End spot for brunch or dinner to channel the Mother of Dragons (a mezcal sipper with fresno pepper); the Battle of the Bastards (with rum and pineapple rum, orange, lemon, vanilla, banana, raspberry, and a floater of sparkling pinot noir); and more fun cocktails. The GoT menu is on all day on Sunday, May 19.

In honor of the GoT the series finale, this Bay Village bar’s “Winter Is Coming” themed menu returns for three days only: May 17-19. Feast upon Dragon Fire wings, Little Fingers, and more snacks, and drinks like the muddled dragon fruit-spiked Dracarys, with Flor de Cana rum and lime.

The White Walkers have allegedly been vanquished, but any not wiped out should avoid Shack Shack’s Newbury Street location, which is serving up a Dragonglass Shake this week. Another GoT-inspired special, the Dracarys burger, is “sourced from the finest head of cattle the Seven Kingdoms has to offer,” the burger kings claim, and “griddled by the fires of Drogon and Rhaegal. Caution: may be too hot for non-Targaryens.” The Game of Thrones specials are on the menu at select Shake Shack locations (only Newbury locally) through May 19.

Hurricane’s at the Garden

In between Bruins playoffs parties, this TD Garden-adjacent bar is pre-gaming the GoT series finale. Gather a group of no more than six Throne pros and swing by early on Friday to sign up—trivia teams will registered on a first-come, first-served basis. Then be transported to the realm (of knowledge). Gift cards—and major bragging rights—are on the line for the winners.

Suffice it to say a lot has happened over eight seasons of Game of Thrones. The folks at the Back Bay location of Kings (Landing?) are considering it all as they plan their final battle—of trivia. Get a team together of 2-6 players and make a reservation to test your knowledge. On the line are fun prizes, and there will be on-theme decorations and food and drink specials throughout the night. Dedham and Burlington Kings locations are hosting GoT trivia on Monday, May 20, too.

Triviaoke at the Hong Kong

Test your series knowledge—and show off your beautiful pipes. On Wednesday May 22, it’s karaoke night and GoT-themed trivia night in the realm of Faneuil Hall. You have been warned. Free to attend, but registration is required.

Prove you deserve to sit on the iron throne—and maybe even win Red Sox tickets. This Back Bay bar, along with sponsor Bent Water Brewing Co., is hosting a post-series trivia night, with an epic prize on the line.