The growing, New York-based restaurant group has Cambridge on its shortlist of desired locations. 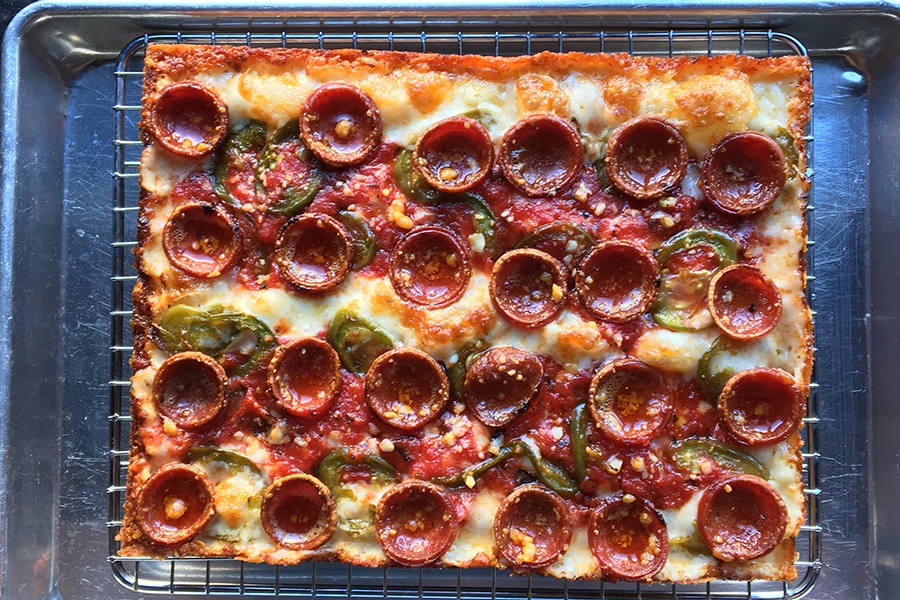 A popular Brooklyn pizzeria that serves an uncommon style of pie is considering a Boston-area expansion. Emmy Squared, which specializes in rectangular, thick, and cheesy Detroit-style pizza, is targeting 2020 to potentially open a location in Cambridge or Boston, Eater Boston reports.

Emmy Squared debuted in Williamsburg in 2016, as the second concept from Emily and Matt Hyland of New York’s famed wood-fired pizza place, Emily. The separated couple, who met while in college in Rhode Island, now have two Emmy Squared outposts in New York, one in Nashville and another on the way to that southern city; and two Emily Pizzas in New York. Matt Hyland and the Pizza Loves Emily Group is also behind Violet, an East Village restaurant inspired by New England—specifically, the grilled pizzas at Providence’s Al Forno.

At Emmy Squared, the main event is gourmet, Detroit-style pizza. Hallmarks of the style are its “square” shape (that’s how it’s called, even though its typically baked in a rectangular sheet pan); focaccia crust and crispy cheese right to the edge; and sauce drizzled on top of the cheese. Emmy Squared uses a blend of mozzarella and ricotta, and toppings like pepperoni, Calabrian chiles, something called the “Trufflleist mushroom cream,” pineapple, and more. It does some white pizzas, and some topped with a house-made vodka sauce. It also serves a much-beloved double-stack burger called Le Big Matt, a chicken parm sandwich, salads, and more. About 80 percent of the menu is on at every location, with 20 percent locally exclusive items, Eater reports.

“Once we’ve gotten our feet on the ground in those markets we’d love to start our search in the Boston area,” Ullrich says.

Greenstone told Eater that Cambridge might be a good choice for the company, thanks to all of the local college students and recent graduates—prime pizza customers. He also said, though, that the company finds it most efficient to open more than one restaurant in a given area, so Boston could very well get its own. Emmy Squared’s parent company is seeking spaces between 2,000 and 2,500 square feet, for 75-100-seat restaurants.

“We want to be patient” to find the right locations, “but we also want to have a footprint up and down the East Coast,” Greenstone said.

Bostonians will certainly have to be patient to get Detroit-style pizza at their own Emmy Squared. Curious to try this unique pie? Fenway restaurant Tapestry has served it as a special, and so has the Coolidge Corner outpost of Otto Pizza. Eater Boston also reports that a restaurant called Avenue Kitchen + Bar is getting ready to open in Somerville with Detroit-style pie on the menu.