The Boston Seaport Is Getting a “Social Darts” Venue and Restaurant

Flight Club will open its second U.S. outpost in Boston late this year. 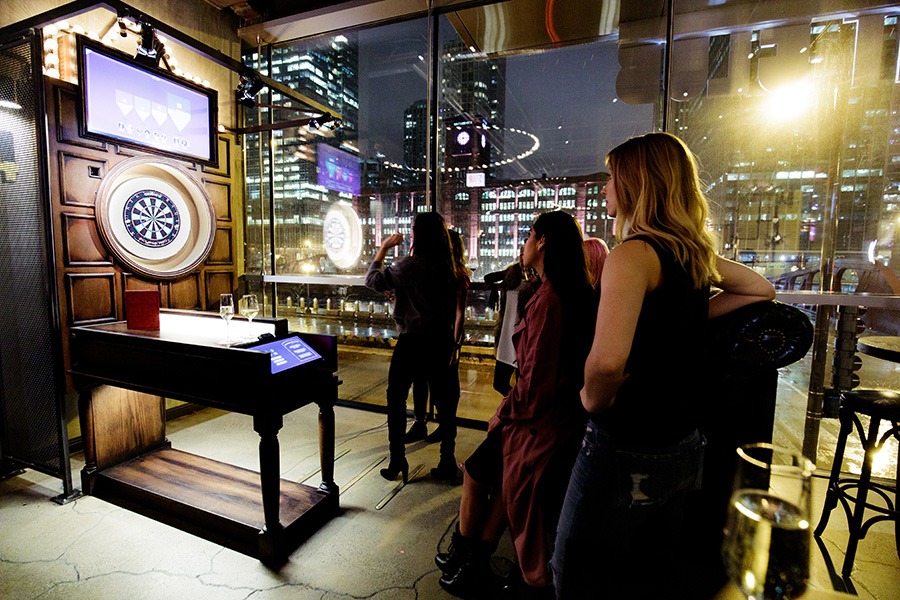 Scenes from Flight Club in Chicago. The international “social darts” venue is coming to Boston in 2019. / Photo courtesy of Social Entertainment Ventures

If you like to add some friendly competition to a night out—but want to wield something a bit more manageable than the hefty weapons at Boston’s trendy new ax-throwing bar—it’s time to get into optimal darts-flicking form. A “social darts” venue—with a full-service bar, restaurant, and an “immersive gaming experience”—is headed for the Seaport. Flight Club is slated to open late this year at 60 Seaport Blvd.

The game of darts—tossing tiny missiles at a fixed target—is a fixture at dive bars like Croke Park Whitey’s, old-school pubs like J.J. Foley’s, and hipster sports bars like Parlor Sports. But Flight Club, a U.K.-based chain which opened its first U.S. location last year in Chicago, upgrades the rec room-requisite with five original, multiplayer games; and user-friendly technology to keep track of scoring. It also elevates the typical dart-throwing experience with individual “oches,” or playing areas, for groups of up to 20 people.

It’s the latest in a growing trend of experiential gaming bars, like aforementioned ax-throwing; Urban Axes is now open in Somerville, and another place called Half Axe now hosts the activity in Marlborough. Boston has long offered upscale billiards and gaming thanks to spots like Jillian’s and Flight Club’s soon-to-be-neighbor, Kings Dining & Entertainment; and the city’s arcade bar scene is also on the rise, with the likes of Cambridge’s A4cade, and Versus in Downtown Crossing.

Besides the physical activity, Flight Club offers lunch, dinner, and shareable “oche” menus, plus creative cocktails and a full bar. The Chicago location’s menu offers everything from raw bar options, snacks like Tandoori chicken skewers, and ginger vegetable dumplings; to burgers, sandwiches, and flatbreads; entrees such as roasted sea bass with zucchini noodles; desserts, and more.

In Boston, the company is headed for a space at One Seaport that was briefly occupied by 75 on Courthouse Square. When the upscale, American bar and grill with locations in Beacon Hill and Chestnut Hill shuttered after just seven months in the Seaport, WS Development said, “We and the 75 Courthouse Square team have agreed that an alternate approach to the space… would better serve the growing Seaport neighborhood.” Now we know that means innovative darts games and bespoke cocktails. Based on the growing trend of experiential gaming bars, the odds may be in their favor.

Stay tuned for more specific information about Boston’s social darts venue ahead of a planned, late 2019 opening for Flight Club.