Check Out the Upgraded Retro Cocktail List at Devlin’s

The Brighton bar's new general manager is bringing back 1970s cocktails this summer—but this is not just another Tequila Sunrise. 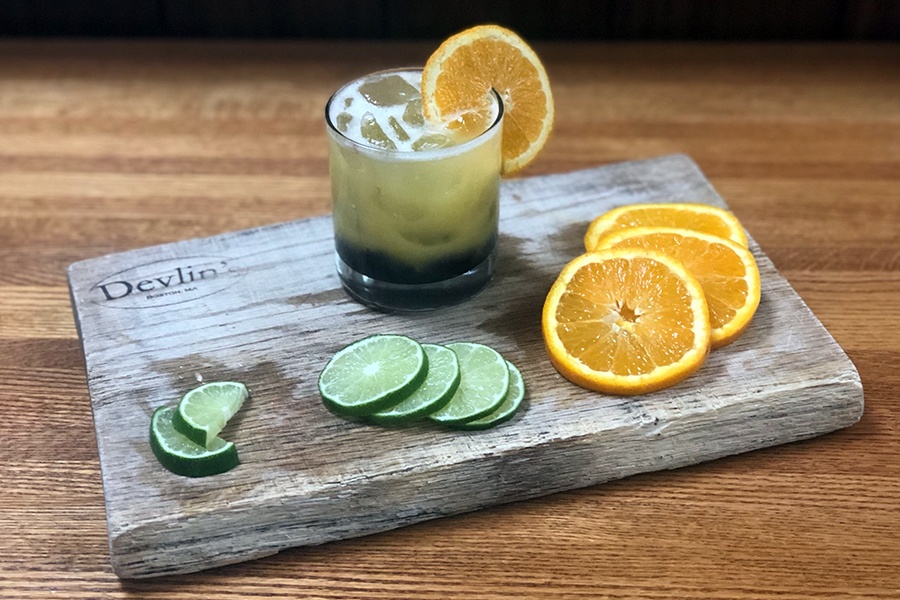 Let’s just say it: The 1970s were not the pinnacle of cocktail culture. It was a time of college bars hawking five-for-$1 beers (we’re sure that sounded like a great idea at the time), as well as epic hangovers fueled by a toxic mix of low-quality liquor and sugary mixers. But man, was it a fun decade. And fun is what Curtis McMillan, the new general manager at Devlin’s, wanted to emphasize with his first cocktail list at the Brighton neighborhood mainstay: a loving homage to drinks of the ’70s, updated for today’s discerning drinkers.

Consider it the dawn of a more glorious Tequila Sunrise.

“The entire menu is what I would call a tribute band,” says McMillan, who previously created the original cocktail program at the South End’s Wink & Nod. 1970s cocktails, he says, were “very sugary, very fast [to make], very colorful, and inherently not balanced. The music was good, but it was a little too much and a little too fast.”

McMillan took those iconic drinks—like a Harvey Wallbanger, a Fuzzy Navel, a Tequila Sunrise—and “slowed everything down” (read: added thought and care) with high-quality spirits, fresh juices, and artisan bitters and foams. McMillan believes he’s the first person in Boston to debut a modern cocktail menu inspired exclusively by these outdated drinks. There’s some precedent elsewhere: Jeffrey Morgenthaler has been serving up a reimagined amaretto sour at the influential Clyde Common in Portland, Oregon, for years; Martin Cate revolutionized tiki drinks when he opened Smuggler’s Cove in San Francisco in 2009.

Both Cate and Morganthaler offered their blessing to McMillan by loaning the recipes for their signature drinks. Cate’s Harvey Wallbanger is on the menu, with fresh orange juice, the sweet-vanilla-anisey liqueur Galliano, and honey syrup. Morganthaler’s amaretto sour is a bourbon-forward take on the drink, with Lazzaroni Amaretto and cask-proof Even Williams cutting its sweetness.

All that said, McMillan will be the first to tell you that the majority of Devlin’s customers will not care about the intricacies of the ingredients.

“Devlin’s is never going to be [Brighton] Bodega, but we’re also not Porter Belly’s,” McMillan says, referring to Devlin’s stirred-cocktail sister spot, and its beer-and-shot pub sibling. “We’re the middle ground. What does Devlin’s represent? I came to the conclusion it’s the fun place. There’s no pretentiousness. A lot of my customers aren’t as concerned about the history lesson. They just want something good. So, I thought, why don’t we take cocktails from the ’70s that people said would never be good, and find a way to make them usable, and good, and fun.”

The new, summer cocktail list is just the latest change McMillan has made since taking over as general manager last month. Beer lovers should follow the bar’s new draft list Twitter account, @DevlinsDrafts, and board game fans will want to roll in on a Tuesday night for games with Mystic Beer. Daily boozy slushies are also back for patio season—and Devlin’s has one of the best outdoor spots in town. Throughout the summer, the interior is getting ongoing updates, McMillan adds, and chef Gordon Powers continues to innovate with the globally inspired menu.

But it’s still the same Brighton standby. “To push the beverage program to make it special is really the goal,” McMillan says. This summer’s ’70s-inspired lineup “is a scratch on the surface. Things are just going to get more interesting.”

Check out Devlin’s new cocktail list below. It debuts Thursday, May 30, and will be available until September. 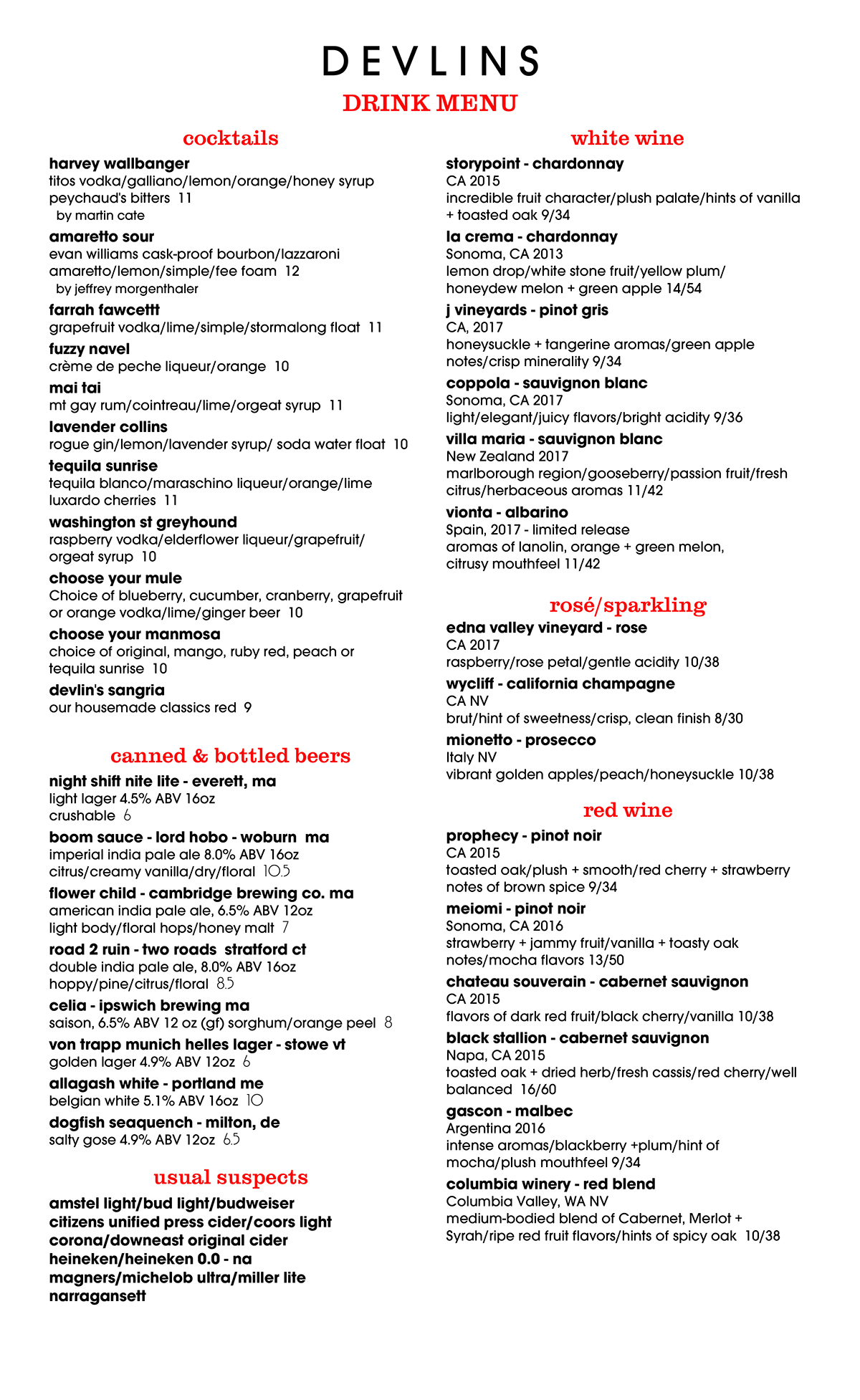 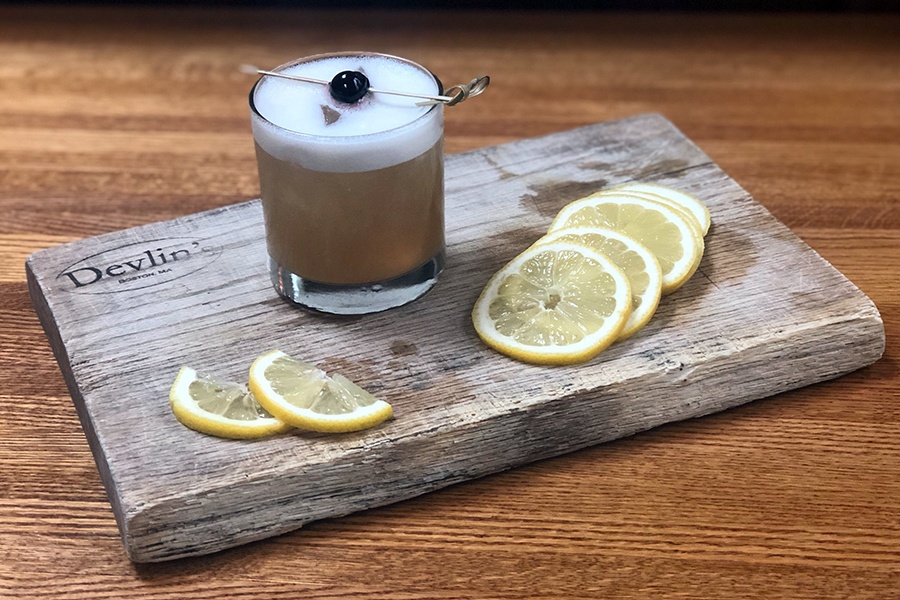 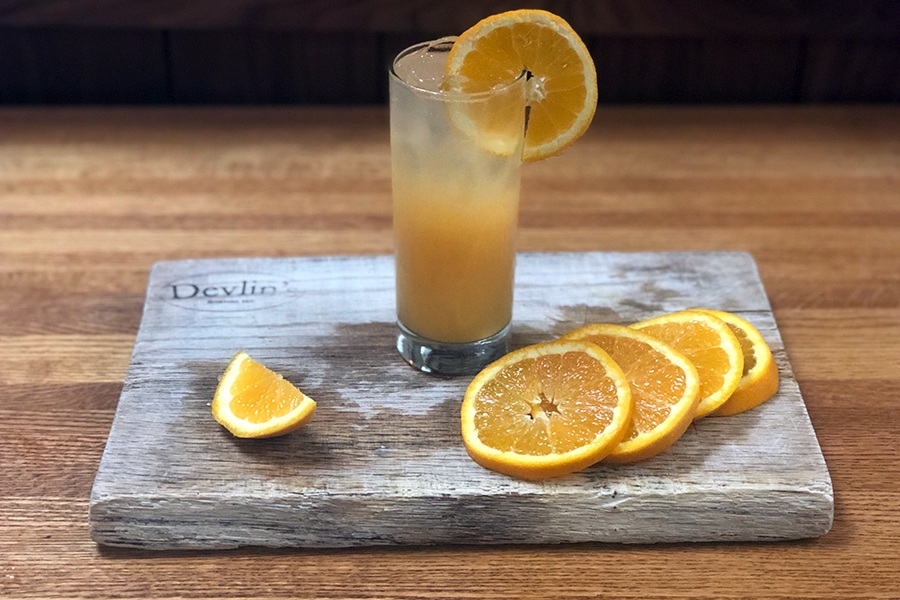 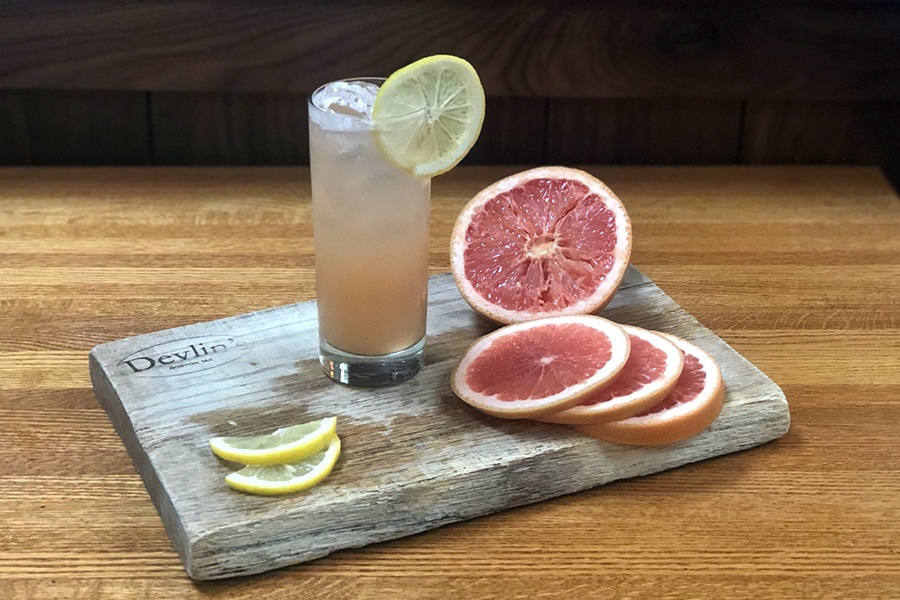