Frank Pepe Pizzeria Opens in June at the Burlington Mall

The legendary New Haven pizza joint also has a Watertown location in the works. 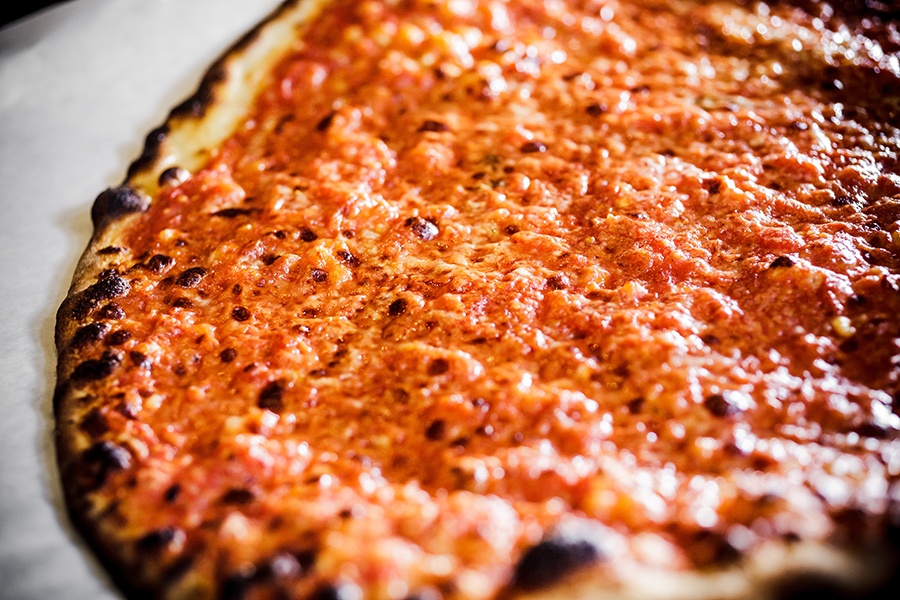 Keeping the promise it made to hungry Bostonians back in 2015 when the first Frank Pepe Pizzeria Napoletana debuted in the area, the iconic New Haven restaurant is about to open another Massachusetts location—and counting. Frank Pepe’s crispy, coal-fired apizza debuts in Burlington on June 10, and the Connecticut company is also working on a Watertown restaurant.

“One of the things we discovered is we had a life here in absentia,” Pepe’s site development lead, Jeff Fields, told Boston when the first local location opened in Chestnut Hill. “When we said we were doing Pepe’s [in Massachusetts], social media went off the charts. We’re gratified as hell.” The first Boston-area location ignited plans future expansion here, which are now coming to fruition.

Indeed, it was big news when the world famous, 94-year-old, family-owned pizza company shared its intentions to expand into Boston. Though it’s now owned by a group of the founder’s grandchildren, Frank Pepe’s recipe hasn’t changed: A proprietary flour blend and genuine Italian cheeses, tomatoes, and olive oil, blistered in a 600-degree hearth, comprises the chewy and char-flecked pies. Among the many accolades Pepe’s has earned through the years, it was inducted into the James Beard Foundation’s “America’s Classics” list in 1999, and was called the “Best Pizza on Earth” by the Guardian in 2009. It’s the reigning best pizza in America, according to the site the Daily Meal.

The Burlington location, taking over half of a former Uno pizzeria at the Burlington Mall, serves up signature pies like tomato and mozzarella (or mootz, in New Haven parlance); white clam; spinach, mushroom, and gorgonzola; and quattro formaggi, with mozzarella, asiago, goat cheese, and pecorino. It also offers Pepe’s signature seasonal greens (with grape tomatoes, cucumber, shredded red cabbage, Kalamata olives, pecorino romano, and balsamic vinaigrette) and Caesar salads, and has wine and beer among the drink offerings. Like all Pepe’s locations, it also serves Connecticut-made Foxon Park sodas.

The newest Pepe’s invokes the 94-year-old New Haven original with design details like signature green vinyl booths, white ceramic tiles, and art deco-style pendant lighting. It was approved for just under 100 seats. The Pepe’s team custom-built its coal-fired oven based on the original blueprint of the New Haven hearth, and fired it up several weeks ago to get it ready for Monday’s grand opening.

The Burlington pizzeria is Frank Pepe’s 11th location. The third-generation owners embarked on “slow, methodical” expansion around the northeast about 15 years ago, to keep their grandfather’s legacy alive, said grandson Gary Bimonte, a 40-year Pepe’s employee and the company’s director of quality assurance and training. Pepe’s now has six Connecticut locations, plus outposts in Yonkers, N.Y., Warwick, R.I., and Greater Boston. It’s headed for the Arsenal Yards development in Watertown, too; construction will begin there later this summer, and the pizzeria is on track to open in spring 2020, a Pepe’s rep says today.

“We don’t just plop Pepe’s Pizza everywhere. We look for strategic locations,” Bimonte previously told Boston. “This is a hand-crafted product, and these guys have to learn how to make Pepe’s pizza.”

Burlington will get a taste of that legacy beginning at lunchtime on Monday, June 10. The restaurant opens at 11 a.m., following a ceremonial ribbon-cutting with the Pepe’s family and town officials. It will be open daily from 11 a.m. until 10 p.m.