11 Places to Eat and Drink During Boston Pride

Before you hit the block parties, try some of these tasty, special menu items that actually give back to LGBTQ organizations.

Congratulations, you made a rainbow food, is a thing one might occasionally utter to oneself in June, upon encountering the umpteenth LGBTQ Pride dining promotion that telegraphs support for a marginalized community only by finding creative new uses for food dye. (Cynicism, or honesty? Or both?)

Okay, okay. In today’s climate, all shows of support are good to see–even relatively shallow ones. But as we head into the height of Boston Pride—including the exuberant weekend parade and thumping block parties—consider putting your dollars toward eating or drinking out (out!) at restaurants that more substantively give back to LGBTQ organizations. Here are a few festive foods and cocktails to consider, plus a little background on how they’ll help. 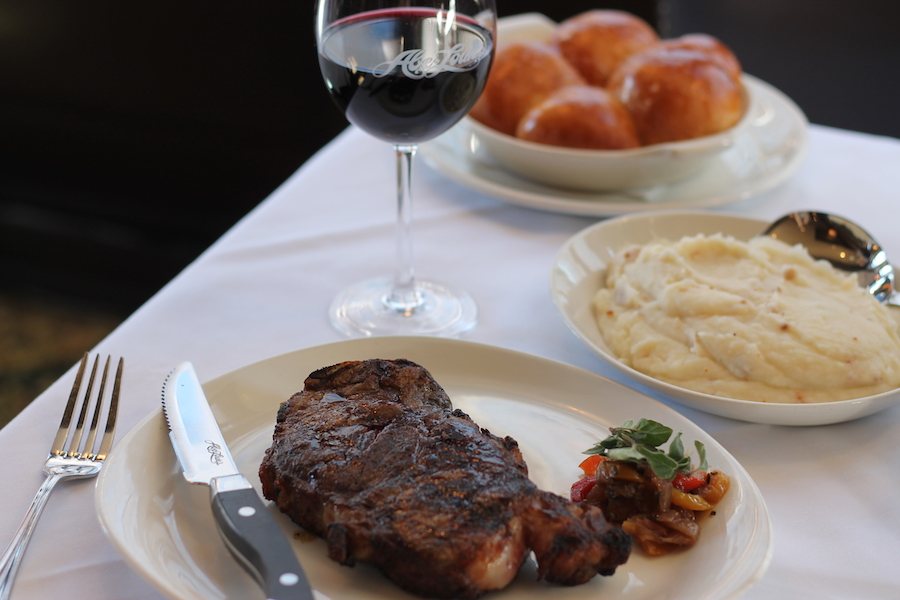 This Back Bay steakhouse, seafood specialist, and American generalist are all part of the same restaurant family–and each of the three members will simply be directing a portion of sales on Boston Pride’s parade day (Saturday, June 8) to an LGBTQ cause. No special, adorably-named menu items here! How mercifully, um, straightforward.
How it helps: 10-percent of Saturday sales will be donated to DotOUT, an LGBTQ neighborhood organization in Dorchester. The group was selected as a tribute to Travis Mitchell, a longtime employee of the restaurant group and co-vice-president of DotOUT, who passed away earlier this year. 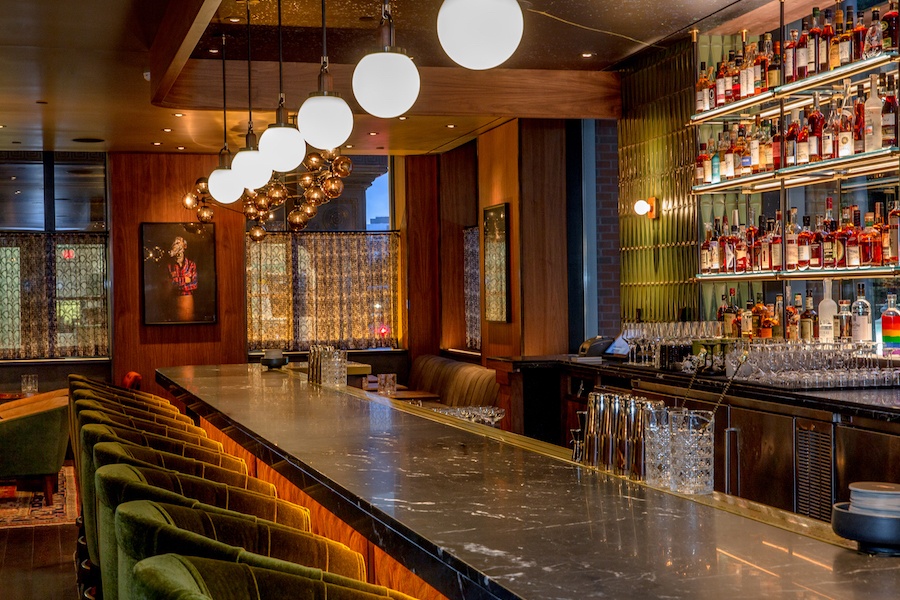 The Bar at Better Sorts Social Club/Photo by Mike Diskin

Bar star Naomi Levy has created a month-long lineup of Pride cocktails inspired by the queer-favorite cult musical Hedwig and the Angry Inch. All month long, you can sip on tipples like the saucy Midnight Checkout Queen, rye whiskey with brown sugar, tomato, and barbecue bitters. Bring one in to the cocktail lounge’s private dining room, where they’ll be screening Hedwig for all guests on Friday and Saturday nights.
How it helps: 10-percent of every cocktail sold will be donated to the Trevor Project, an organization that provides crisis intervention and suicide prevention for LGBTQ youth. According to some stats, LGB youth are five times more likely to have attempted suicide as their straight peers; for trans youth, the disparity is even more dramatic.

If Lisa Frank frosted cupcakes, they would probably look a lot like the vegan fast-casual chain’s tasty “funfetti” Pride treats, coated with vanilla icing and rainbow sprinkles.
How it helps: According to the Human Rights Campaign, up to 40-percent of homeless youth are LGTBQ. 50-percent of sales from every $3.75 cupcake will be donated to the Happy Hippie Foundation, a nonprofit supporting homeless young people (and other at-risk populations) that was founded by Miley Cyrus. Good twerk, everybody.

Did you always claim Lil’ Kim in drag-karaoke renditions of “Lady Marmalade”? Have we got a drink for you: the Queen Bee cocktail, which will be served at the hotel’s lobby bar throughout the month of June. It was created by Anna Hunt, general manager of adjacent RUKA restaurant, and offers a refreshing buzz of dark rum with St. Germaine, strawberry, basil, and lemon. When someone offers to buy you a drink, point them here. (“Why spend mine, when I can spend yours?”)
How it helps: One dollar from every cocktail sold will benefit BAGLY, a multi-service organization that provides safe spaces, leadership development, healthcare clinics and other important programs for LGBTQ youth in Boston. 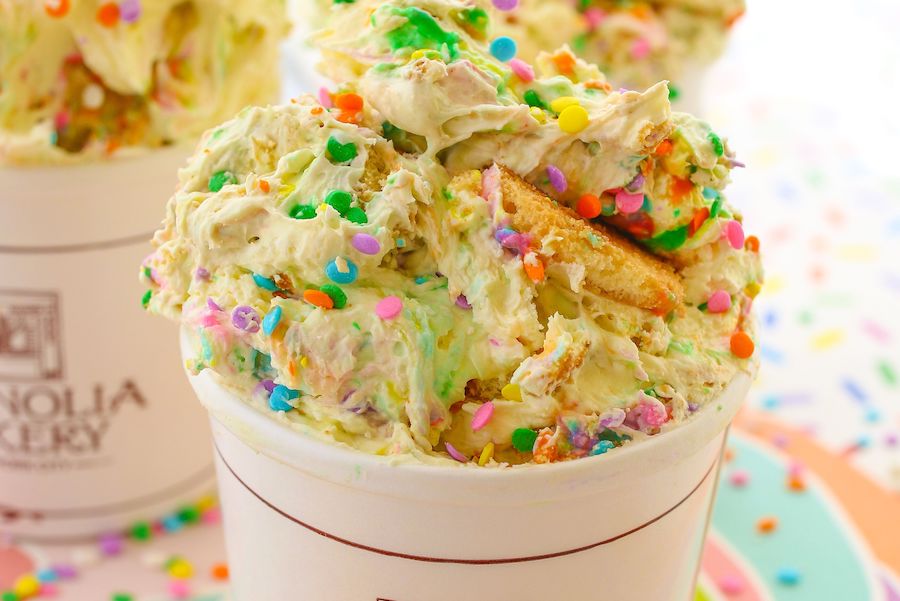 Gay men: Raise your hand if a straight woman has ever just assumed that you have an encyclopedic knowledge of Sex & the City. Annoying, right? When Greenwich Village-founded Magnolia Bakery opened a location in Boston, some of us weren’t just excited because of the iconic scene in Season 3, Episode 5, when Carrie (that scarf!) and Miranda are shoving their face full of Magnolia cupcakes right after–er, I have said too much. Anyway, Magnolia’s famous banana pudding has been bedecked with colorful confetti and rebranded Pride pudding through Saturday. Eat it while watching the sassy, empowering television series of your choice.
How it helps: 10-percent of Pride pudding sales will go to the aforementioned Trevor Project.

We can debate all we want about how iced coffee got so gay. (Some of us might point to the proliferation of Aughties paparazzi photos that featured Britney, Lindsay, Paris, etc. al. clutching California-heat-quenching Starbucks cups, but I digress.) The next time you need a (spiked) caffeine jolt, swing by this Irish pub at Faneuil Hall for the Double Shot Iced Coffee, which comes with a pop of vodka and Frangelico.
How it helps: For every coffee sold, Ned Devine’s and Tito’s Vodka will donate $2 apiece to Boston Pride and GLAD, the LGBTQ legal advocacy organization. (They’re the folks who won the landmark case that brought equal marriage to Massachusetts.) 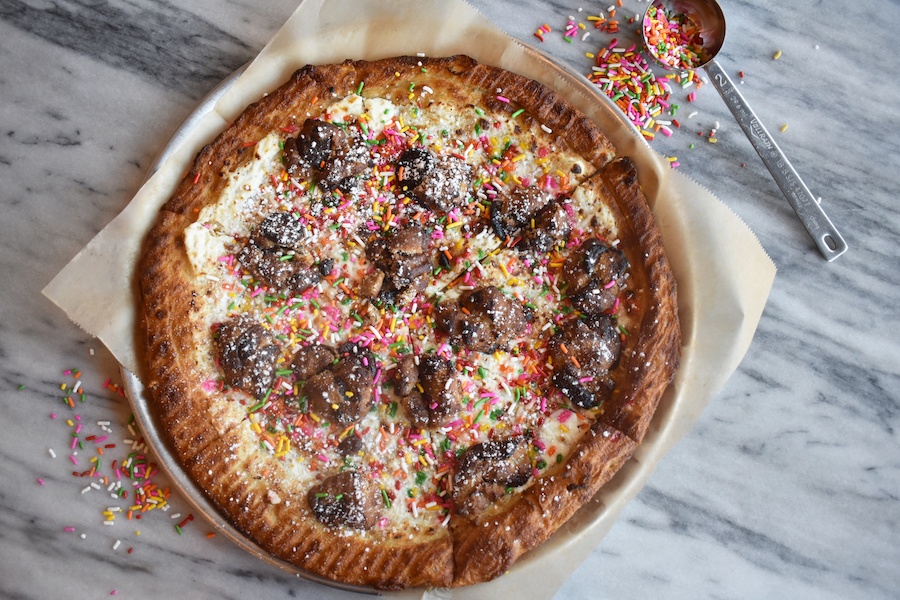 The Nantucket-born chain of grilled-’til-golden, super-thin-crust pies has introduced a “Choc Full of Pride” pizza. Topped with chocolate-chunk cookie dough, ricotta, and powdered sugar, it’ll be available throughout the month of June.
How it helps: 25-percent of pizza profits will be donated to organizations combating LGBTQ homelessness in three cities. Boston’s beneficiary is the Home for Little Wanderers, which operates the Waltham House, one of the few group homes of its kind in the country that is specifically for queer youth. 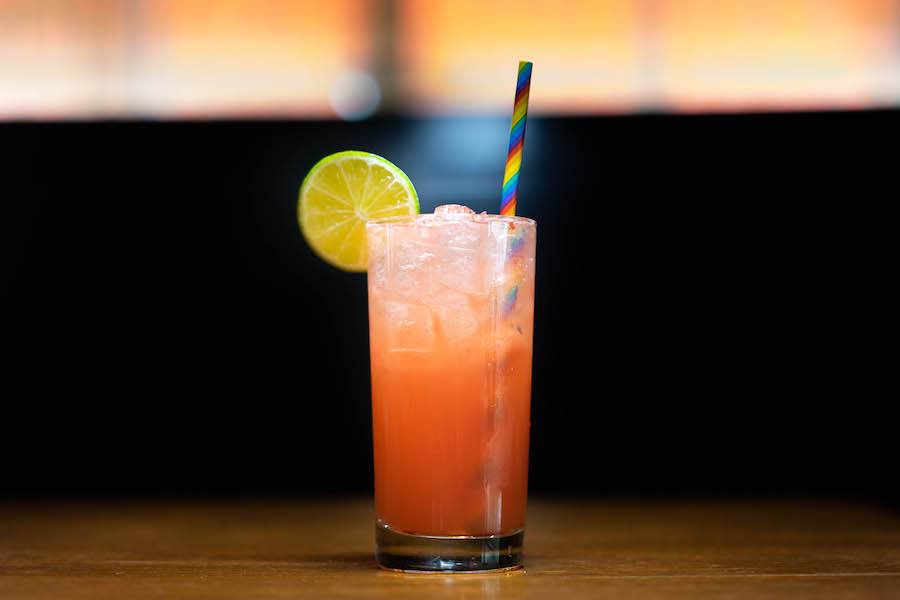 North Shore Pride board member Jarrett Hanley, sales manager for Big Night Entertainment Group, devised a slew of LGBTQ icon-referencing menu items, available through Sunday, June 9 at the outfit’s pan-Asian restaurant. First: Scarf down the Harvey Milk & Cookies, named for one of America’s first openly gay elected officials. Then: Sip the “Looking Back, Loving Forward” cocktail (vodka with sparkling wine, watermelon juice, lime and agave), named as a nod to this year’s Boston Pride theme.
How it helps: For every “Looking Back, Loving Forward” cocktail sold, the Big Night crew will donate $2 to Boston Pride and GLAD. Tito’s Vodka will match every donation–so drink up. 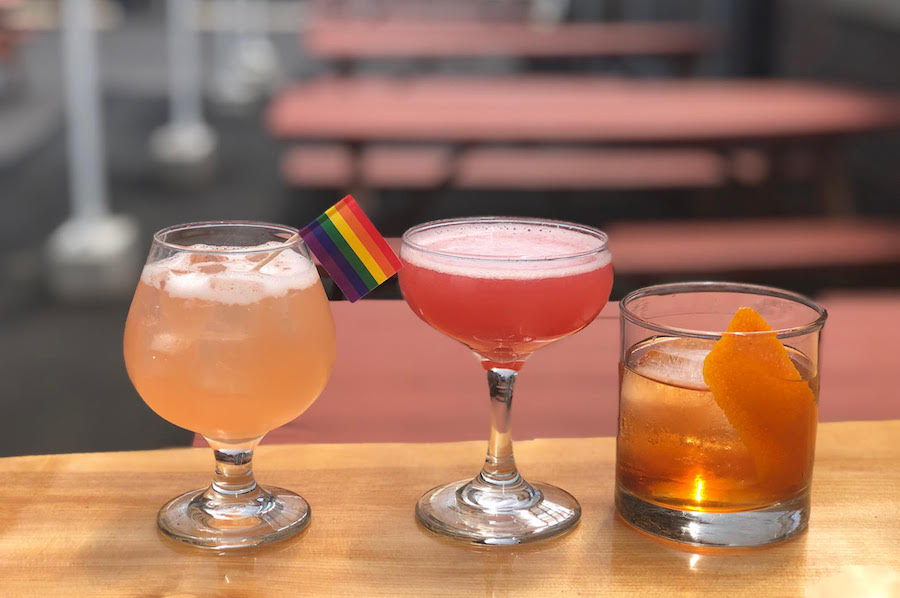 On Sunday, June 9, the spirits maker is hosting a Pride party (1 to 8 p.m.) at its distillery and tasting room. The pooch-friendly patio will be open, DJ Knife will spin throwback jams, and themed cocktails will include the Pride Punch of London Dry gin, myrtle liqueur, pineapple, and bitters. If you spill on yourself, fret not: Pride tank tops will be for sale, too.
How it helps: For every Pride cocktail or tank sold on Sunday, $1 will be donated to the nonprofit Fenway Health, America’s largest LGBTQ-focused healthcare facility.