Where to Watch the Stanley Cup Finals Outside in Boston

Take advantage of tonight's beautiful forecast and watch the Bruins at one of these spots with outdoor TVs or projectors.

We are totally over any weirdness about watching ice hockey in June when it’s Boston’s boys in black and gold competing for the Stanley Cup—and especially when we have prime seats to watch Game 7 of the Finals on TV at an outdoor bar. The puck drops just after 8 p.m. on Wednesday, June 12, and it’s going to be a beautiful night, Boston. Here are 10 al fresco venues around Boston where you can watch the Bruins outside tonight. 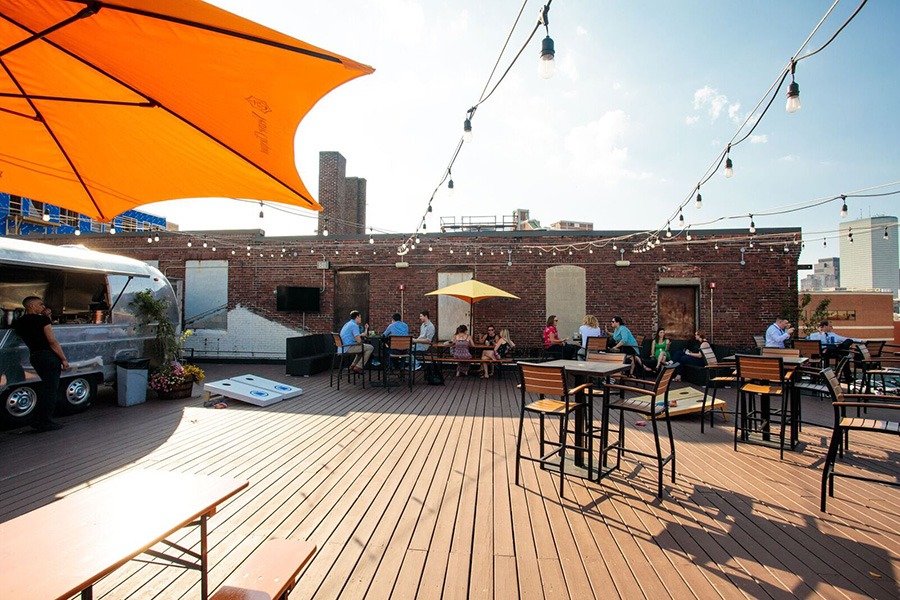 This expansive South Boston venue will pull down the projection screens and turn up the sound for Game 7. It has two large screens in the main restaurant, plus one on its awesome, rooftop “Air Deck,” which also has its own bar serving out of a converted airstream trailer. 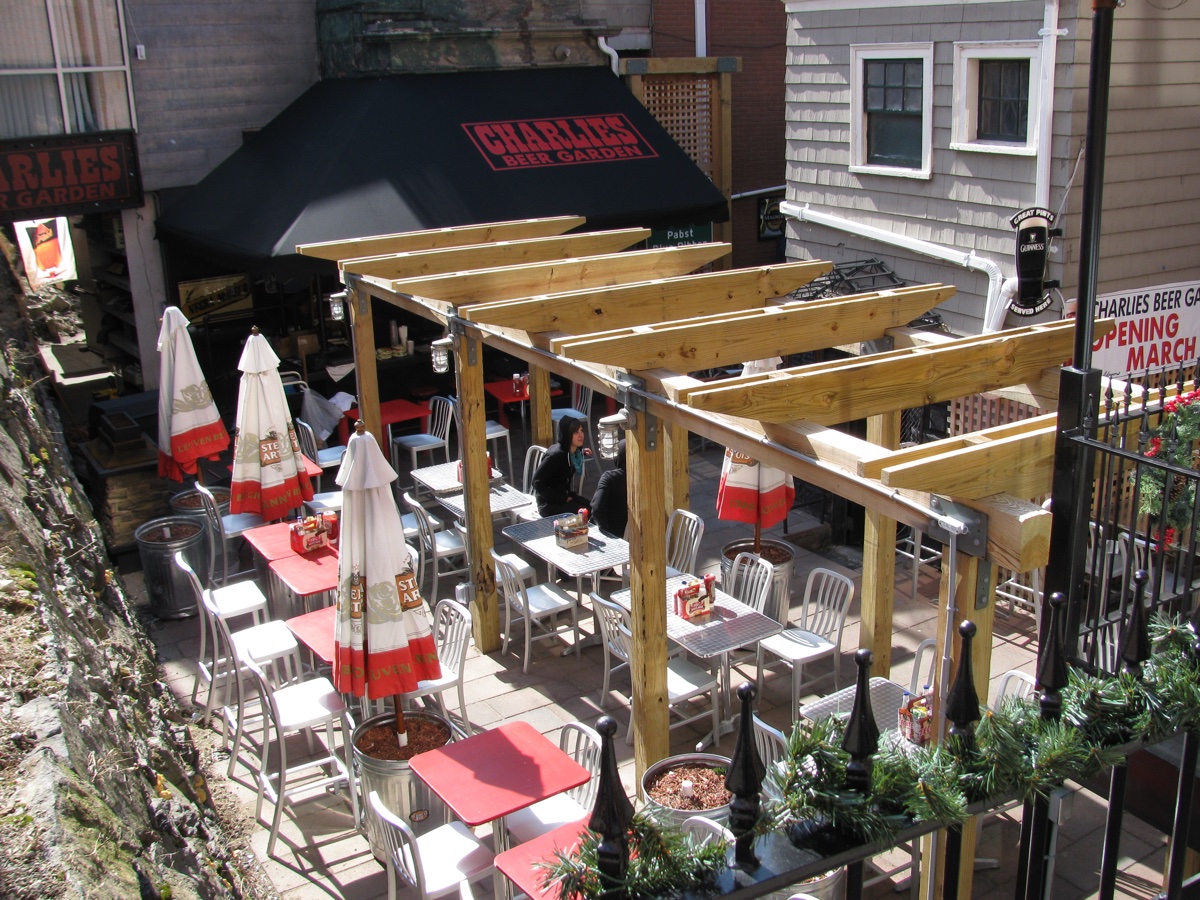 Post up at this classic Harvard Square outdoor bar. There’s just one TV, but it will certainly be on with the sound turned up. 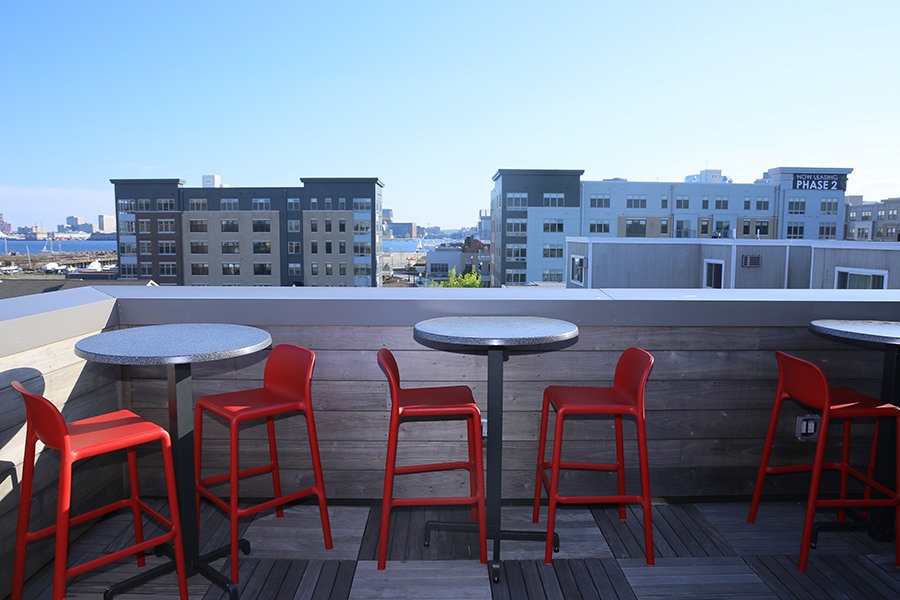 Head to Eastie to watch Game 7 with a unique, rooftop view. Typically open just Thursday-Sunday, the Top Deck at Cunard Tavern is opening up tonight with plans to show the game on a couple outside TVs. (It will be also be open as usual inside, where the floor-to-ceiling windows will be open and the game will be on.) Plus, chef Anthony Pino is cooking up a Game 7 special burger. 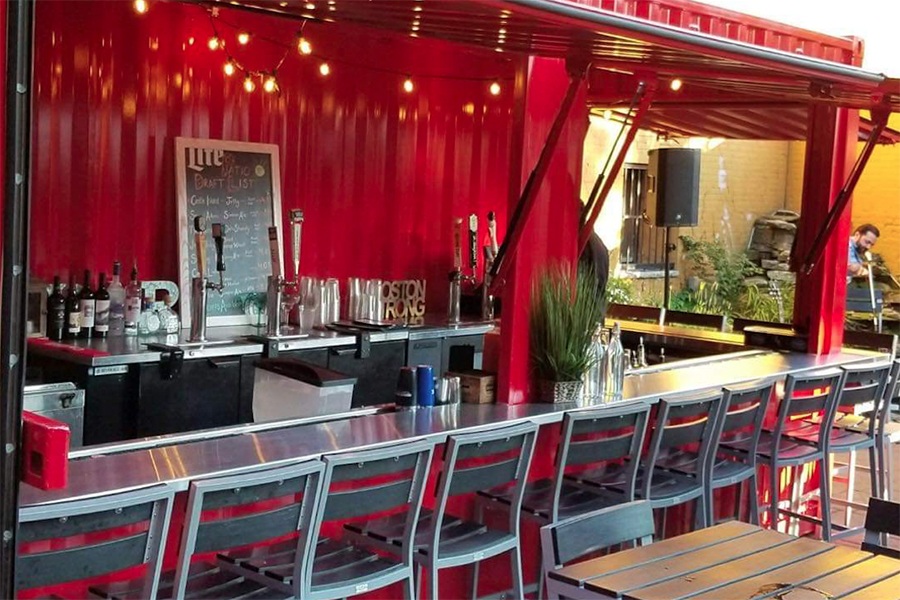 The patio bar at Devlin’s has a couple TVs tuned to the Bruins tonight. / Photo courtesy of Devlin’s

This Brighton neighborhood favorite has one of our favorite patios, in part because of two big TVs at the outdoor bar tuned to all the action. Gather your crew to check out new, retro cocktails, like an actually good Tequila Sunrise, or a Harvey Wallbanger, and cheer on the B’s in the breeze. 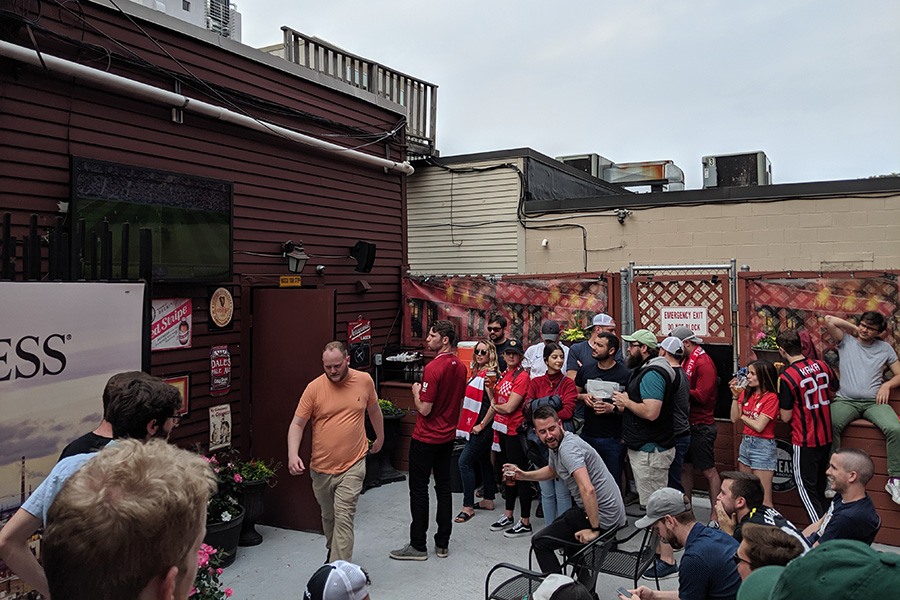 Head out back behind the Field Pub to watch the Bruins on the outdoor TV. / Photo by Alexander Frieden

If you’re looking for a packed pub to catch the action, this Central Square spot is one of many great options in Cambridge—and it’s also home to one of the most reliable outdoor sports-watching patios out back. Get there early to grab a seat. 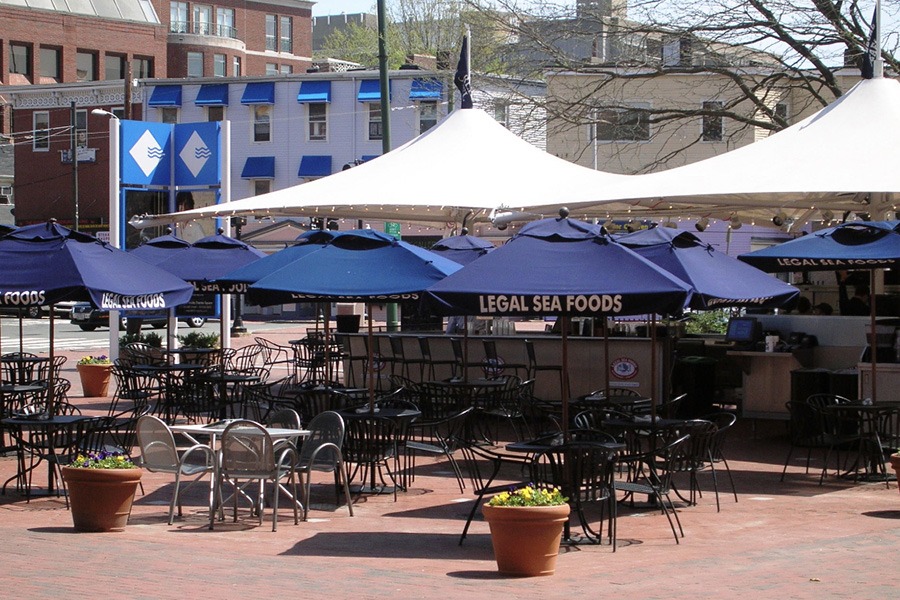 The Harvard Square location of this seafood spot has TVs around its outdoor bar. Bonus: It launches a new, weekly craft beer series tonight, called “Can Jam.” Harpoon Brewery is the first featured brewery, and it will bring a brewmaster and new products to the outdoor bar to pair with specials from the kitchen and live music from 5-7 p.m. The game will be on out there afterwards for the makings of a great Wednesday night. Seafood lovers south of the city can head to the third floor of Legal Harborside, which will open to the public at 8:30 p.m. tonight after a private event; or check out the new-ish location of Legal in Chestnut Hill, which has a retractable roof over its bar and plans to show the game. 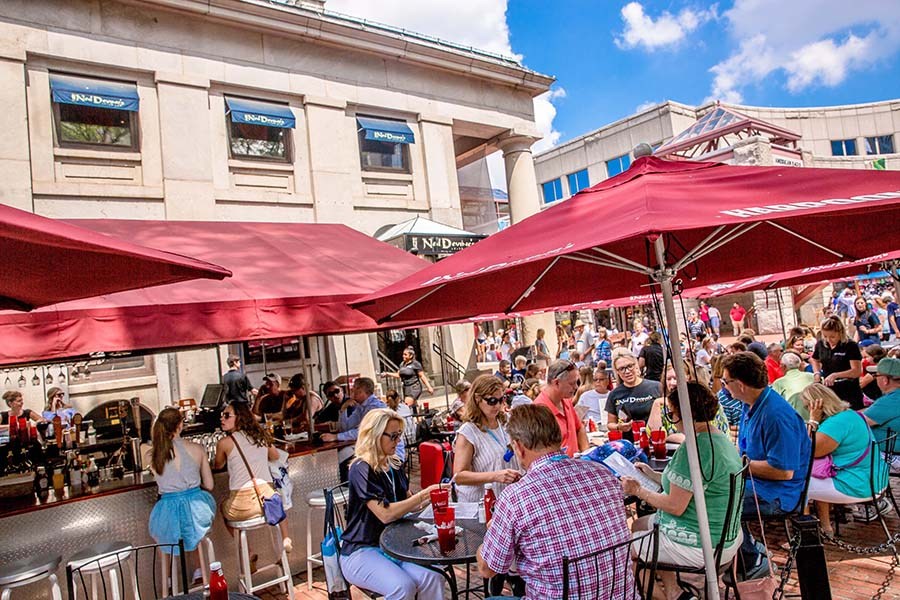 Grab a seat in the middle of the excitement on the patio at Faneuil Hall pub Ned Devine’s. / Courtesy of Ned Devine’s

Have an extremely Boston night at this Faneuil Hall pub, which has TVs at its outdoor bar and some of the best chowdah around. GO B’S! 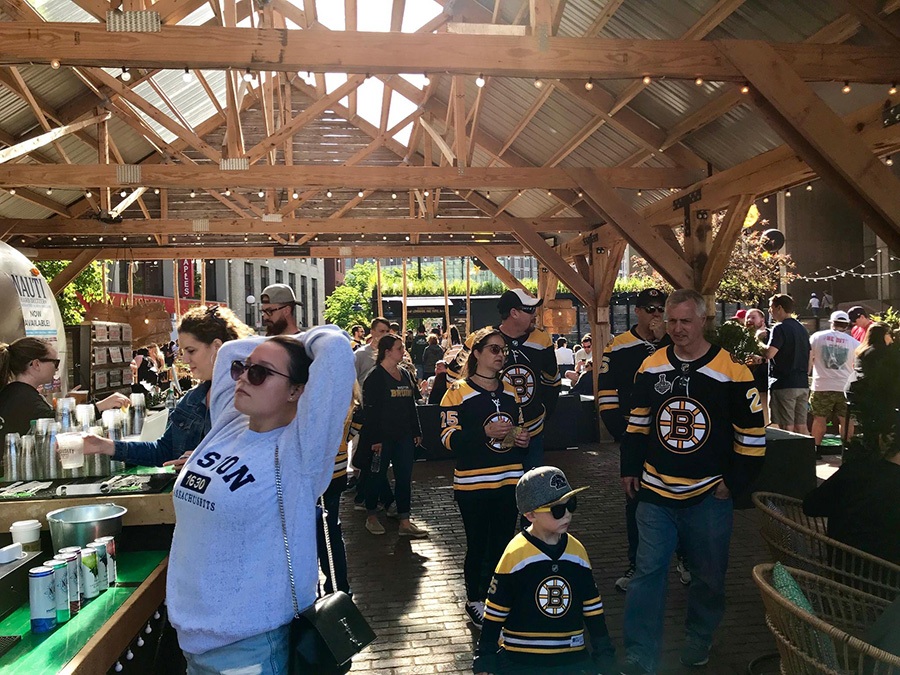 Not too far from where all the action is happening at the TD Garden, the Patios—the seasonal home to a Wachusett beer garden, food pop-ups, and more al fresco fun—has TVs and will be showing the game. 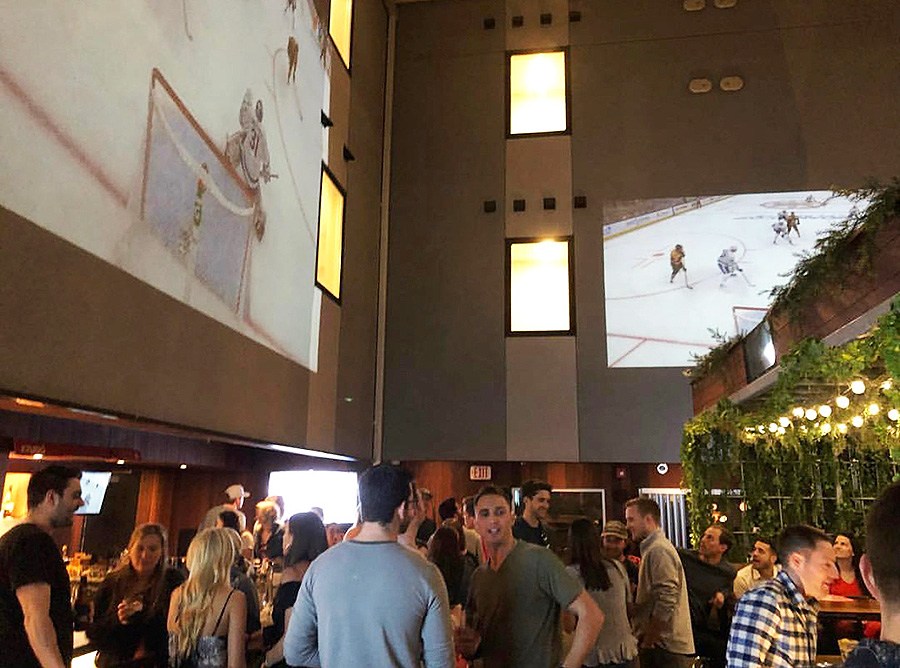 The chic, year-round atrium at this cool spot is one of the reasons it’s a new Southie favorite. In the center of the condo building home to the bistro is a 13-seat bar, and additional tables and lounge seating lush with greenery. There are TVs around the bar, and for special occasions—such as tonight—there’s a gigantic, 12-foot projection screen showing all the action. 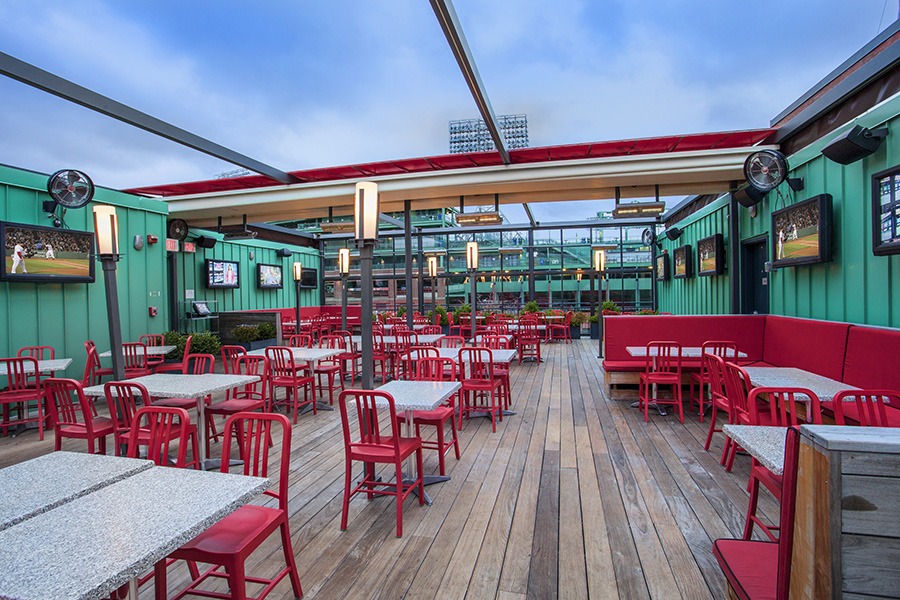 After the early Red Sox game, head to Tony C’s roof deck in the Fenway neighborhood to watch the B’s. / Photo courtesy of Tony C’s

But of course this Fenway neighborhood sports bar will be showing the Stanley Cup Final on its rooftop TVs. The Red Sox have pushed their home game up to 4 p.m. to accomodate the hockey excitement, so it sounds like a great excuse to leave work early and claim a seat. (Suburbanites, take note: Tony C’s Peabody location also has outdoor TVs.)

This is not an outdoor venue, but it should be pretty cool—literally. The Bruins training and practice facility, located at the new Boston Landing development in Brighton, is projecting the game directly onto the ice tonight. Admission is free and open to the public—kids, too!—though it will be capped at 400 attendees. The arena concessions stand will be open, but there will be no booze, just FYI. Doors open at 7 p.m., and the dress code is black and gold, obviously.