Like the East Boston original, the newest location boasts an expansive waterfront patio, and nautical decor to pair with seafood and more. 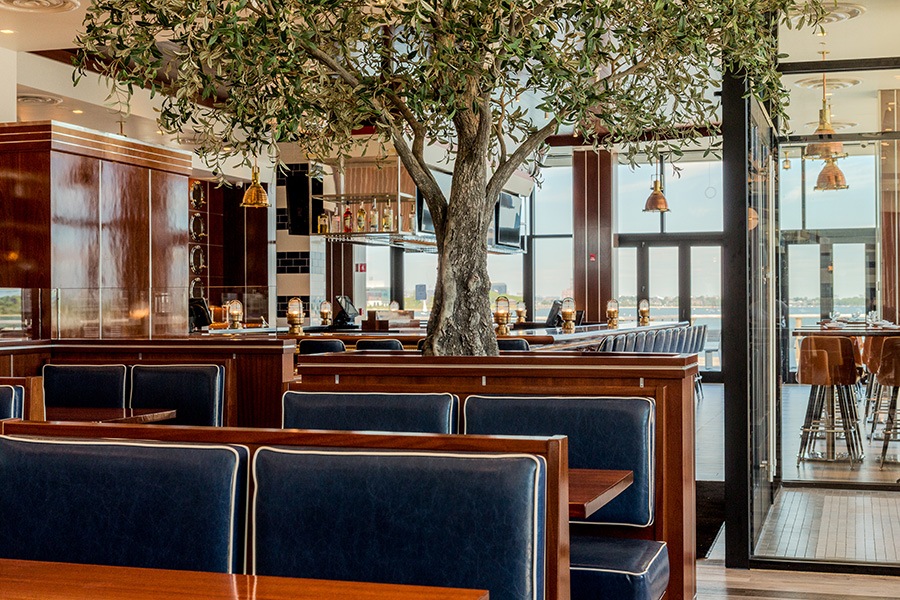 A second location of ReelHouse is just about ready to serve up shimmering waterfront views, globe-trotting cuisine, and patio-perfect cocktails. ReelHouse will open on Quincy’s Marina Bay on Friday, June 21.

The latest concept from Navy Yard Hospitality, which also owns Charlestown’s Pier 6 and Mija Cantina at Faneuil Hall, ReelHouse has a coastal bent. On the menu, that translates to a large raw bar selection including towering shellfish platters; and dishes like salmon crudo tacos with avocado cream and crispy wonton shells; an ahi tuna poke bowl with sushi rice; roasted striped bass with gazpacho and garden vegetables; and East Boston-style cioppino with mussels, clams, and shrimp in saffron lobster both. Culinary director Marc Orfaly, formerly of Boston’s Pigalle and the Beehive, also has approachable dishes from the land on his menu, such as Malaysian-style chicken wings with spicy sambal and ranch; Kobe beef and foie gras dumplings; a wheat berry grain-salad bowl with seasonal vegetables; the ReelHouse burger; steak frites; Long Island duck breast; and more. It has a full bar, with cocktails like the ReelHouse Painkiller; plus an extensive wine list and beer selection.

The decor invokes a weekend on-island—or maybe one spent on your luxury yacht. Like at the East Boston original, Sousa Design planted a large, faux olive tree inside the 118-seat dining room. There are clean, blue-and-white tiles and a mirrored-porthole window motif, plus nautical vinyl booths and captain’s chair-style barstools around the 79-seat lounge and bar area. The restaurant has an open kitchen—but in season, it’s really all about that patio. Outside, expect more than 100 additional seats, plus expansive views of Marina Bay.

The nautical restaurant anchors the newest apartment development on Marina Bay, called Meriel. Since launching ReelHouse at Eastie’s then-new development, the Eddy, managing partner Charlie Larner has been scoping the shores for additional locations, and settled on Quincy’s luxury waterfront neighborhood because of its commuter boat access. A complimentary water shuttle to ReelHouse Marina Bay from South Boston will begin service later this summer.

ReelHouse joins the likes of Port 305, the Chantey, and Victory Point, which North End restaurateurs Donato Frattaroli Sr. and Jr. opened in 2018, as the latest dining destination to dock at Marina Bay, a former naval base which has welcomed more than 1,000 new residents in the last 20 years.

Larner is proud to be there: “We’ve always been committed to enhancing the neighborhoods in which we work and do business,” he said in a statement, adding that the first ReelHouse location brought new life to the East Boston waterfront, including complimentary water shuttle service from his Charlestown restaurant. “Now with the second location of ReelHouse… we’ll be activating that waterfront as well and again offering free shuttle service from other neighborhoods, essentially bringing the city closer together and driving traffic and revenue.”

Navy Yard Hospitality also plans to open a floating restaurant in Charlestown later this summer, a yet-unnamed dining spot on a historic tall ship moored in the Navy Yard. This fall, the company will also open a second location of Mija Cantina at Logan Airport.

ReelHouse Marina Bay will serve lunch daily from 11 a.m to 3 p.m., and dinner nightly beginning at 5 p.m. It will also open for brunch on Saturdays and Sundays. To start, though, it’s open at 5 p.m. on Friday, June 21, then again at noon on Saturday, June 22, and Sunday, June 23, with the bar menu in the afternoon, and dinner from 5-11 p.m. Lunch begins Wednesday, June 26, and weekend brunch starts June 29. 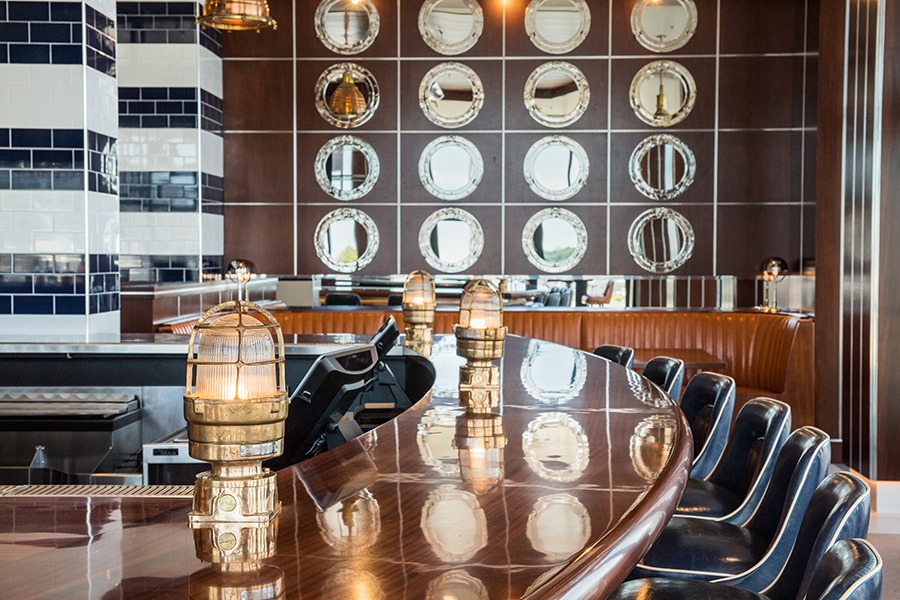 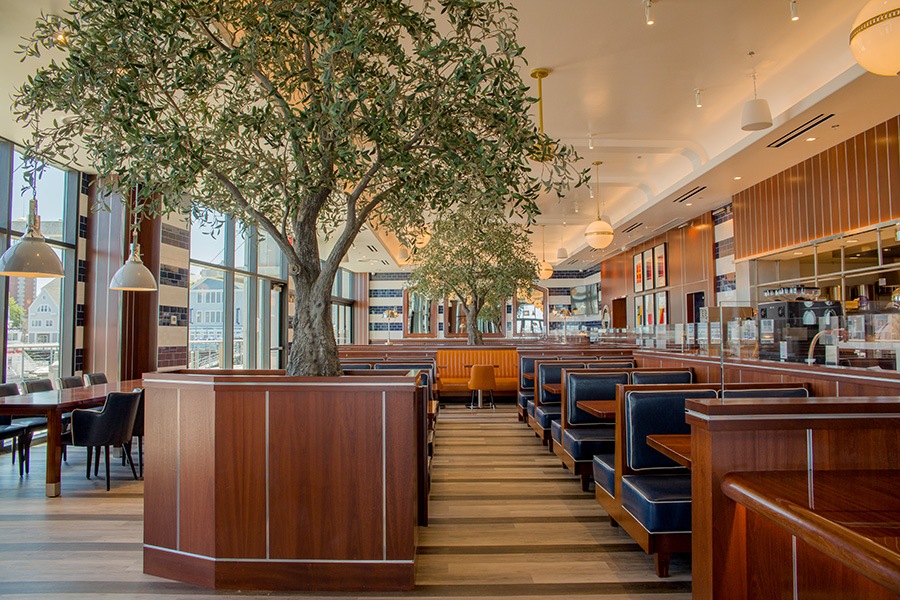 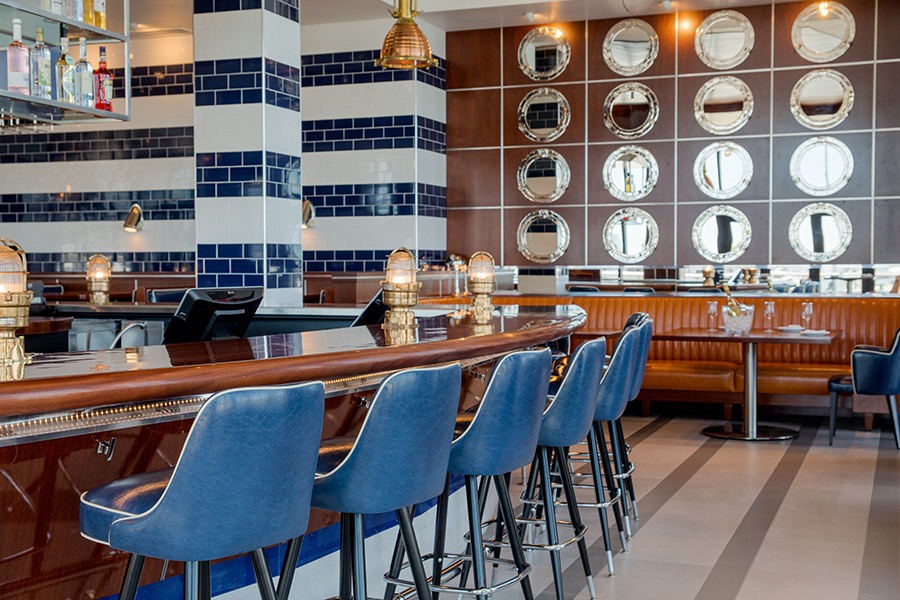