Lord Hobo Made a Beer Exclusively for the Encore Boston Casino

Project Baccarat is the first large-scale collaboration for the brewery, founded by Everett native (and pro poker player) Daniel Lanigan. 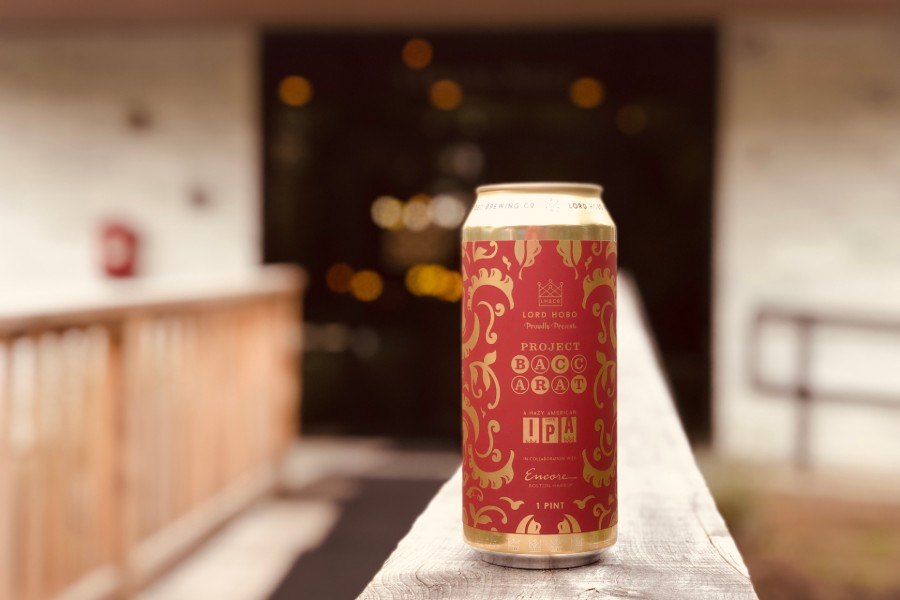 For Lord Hobo’s Daniel Lanigan, drinking one of his own beers at an iconic Boston bar or venue never gets old. He gets butterflies at Fenway Park when he orders a 617 IPA, for example. But his brewery’s latest beer might be the most special: Project Baccarat is made in collaboration with Encore Boston Harbor, the resort-casino Lanigan believes is poised to completely change the nightlife reputation of Greater Boston entirely.

Lanigan is uniquely positioned to have such an opinion. For one, he’s an Everett native, having grown up in the industrial suburb’s projects on Duncan Road. He’s lived in Boston proper since he was 17 years old, and is also behind one of the area’s best-known beer bars, Lord Hobo in Cambridge. Lanigan also happens to be a professional poker player, traveling frequently for high-stakes tournaments like the 50th annual World Series of Poker in Las Vegas, where he’ll compete in early July.

“I’m truly a huge fan of the [Encore] project. I love Boston,” Lanigan says. “With the technology, hospitals, the universities, the restaurant scene, bars, and obviously the sports teams, it’s an amazing city–and I don’t think it gets enough credit for what it is. Boston’s in the midst of a significant renaissance. It’s always been cool, but it’s maturing in some ways. The Encore is a big example of that.”

As part of his company’s collaboration with the Encore, Lanigan has gotten an early look at the hotel rooms (which start at $650 per night), the gaming floors, and more of the $2.6 billion property.

“The other casino options on the East Coast are pretty dreadful,” Lanigan says. At Encore, he says, the elevated experience will start by taking a boat or a taxi from Boston—rather than driving to a remote destination in central Connecticut. And the Encore is “a world-class casino,” he says. “The rooms look insane, the views are beautiful, the service, the quality, the engineering, it feels incredible. It rises us all up to a new level.”

In the world of card-sharks, it’s already changing things: “I have friends [in the poker world] who have never considered coming to Boston, but will now come because there’s this sparkling facility. It really doesn’t exist anywhere on the East Coast.”

He’s optimistic about the resort’s economic impact for the Everett area, too. Encore is filling more than 5,000 positions and is able to offer higher pay and better benefits than most restaurants and hotels. The company also invested heavily in cleaning up the surrounding waterway, as well as building new roads and parkland. “The casino will have a ripple effect on the city for years to come,” Lanigan says.

For Lanigan personally, Encore is already having a big impact: Project Baccarat is Lord Hobo Brewing Co.’s first collaboration of this scale. (It made a beer with East Boston Oysters last year.) The brew crew worked directly with Warren Richards, Encore’s executive director of food and beverage, to select the hops for the easy-drinking, 5.5 percent alcohol-by-volume, hazy New England-style IPA.

“No one will be surprised by the flavor of it. We kept it within our parameters,” says Lanigan, whose brewery is known for juicy hop bombs like Boom Sauce and Glorious. But it’s meant to please a broad audience of casino drinkers, he says.

Named for a specific tabletop card game, “We wanted something that you associated with the casino,” Lanigan says. That also explains the lush carpet-like motif on the label—and the gold cans themselves. While Project Baccarat is brewed exclusively for Encore, the cans will also be on sale at Lord Hobo’s Woburn brewery. They will be sold throughout the Encore resort, including at Waterfront, the property’s beer bar; Rare Steakhouse, and more of the casino’s restaurants and bars.

Project Baccarat isn’t the only locally made sipper for the casino: Bully Boy Distillers have crafted a unique gin for the property, which will be for sale at its gift shops, and available to mix in cocktails at bars throughout the place. Overall, the Vegas-born company infused a lot of local flavor in its Boston-area venture, from the North End-style Fratelli restaurant, to Big Night Entertainment’s latest high-end nightclub, Memoire.

“In Las Vegas, the definition of local often means Oregon, California or Colorado, so to have such a density of world class and craft products on our doorstep [in New England] was particularly compelling,” says Encore’s Richards. “The craft beer movement is on fire and the opportunity to collaborate with one of the fastest growing brands here on a unique offering for Encore was very exciting.”

Considering all the beer competition in Everett, let alone elsewhere around Boston, “We’re super proud that they decided to partner up with us,” Lanigan says.