Mass Hole Donuts Is Opening a Shop in East Arlington

The Boston-centric doughnuts are moving into the former Local Fare store and kitchen. 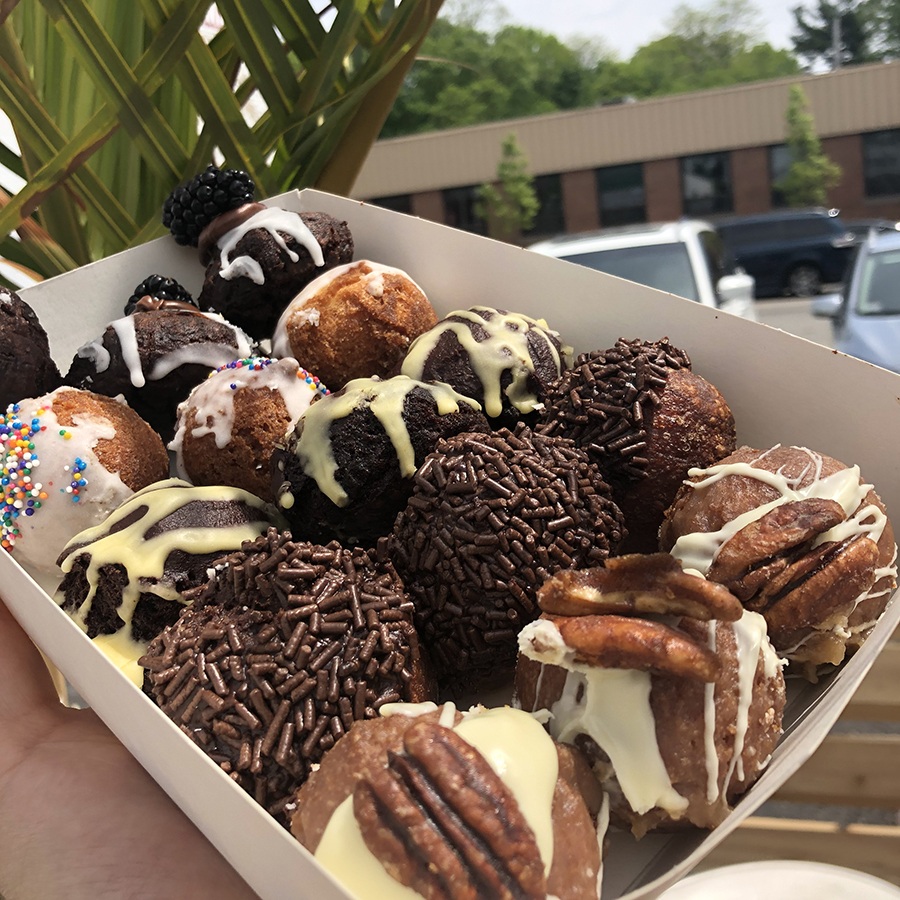 Doughnut baker Alex Mansfield and his business partner, Peter Gladstone, took over the Arlington storefront from the Local Fare founders Michelle Wax and Caroline Huffstetler. The women, along with a third partner, founded the Local Fare in 2016, as a shared kitchen space for their food businesses and others, as well as a storefront showcasing locally made products. “We loved owning The Local Fare and worked with so many amazing food brands over the past three years,” Wax says, but they are now focusing on other projects. They are “super excited” to pass on the keys to Mass Hole Donuts, she adds.

Mass Hole proffers creative, gourmet doughnut holes, with names and flavors inspired by Bay State tastes: Popular bites include Boston banana cream; the Chocolate Newbury (with blackberry and Nutella); Brockton Blackout Cake, which is a take on a triple-chocolate recipe called Brooklyn blackout cake; Mama’s Lil Mass Hole, which is a cake doughnut with a vanilla bean glaze and rainbow sprinkles; and Pecan Hill, with white chocolate, caramel, and pecans. With the Mass Hole Donuts shop up and running during apple cider doughnut season, Mansfield will offer his versions of the New England classic, which feature chunks of local apples and come in variations like hot apple cider.

The doughnut shop will also serve drip coffee and cold brew from Counter Culture Coffee, and Mansfield is developing a signature frozen drink for the menu, as well. He also hopes to introduce some savory doughnut styles. Recipe development includes the Lobster Hole—yes, a lobster roll-inspired doughnut hole—and the Pot Hole, a cannabis-free homage to “the bumpy roads in Massachusetts and recent legalization,” which uses terpenes (aromatic oils) derived from ingredients like pine and lemon to evoke cannabis-like flavors. Mansfield recently applied for a trademark on “Pot Hole.”

The doughnut maker is a one-time farmer, and a former manager at Somerville’s Bloc Café. He started baking professionally as part of the opening team at Ames Street Deli. “It was a great place to learn how to bake, because they made everything from scratch,” Mansfield recalls of the now-closed Kendall Square spot, operated by the former Journeyman owners. He went on to help open Home.Stead Bakery and Café in Fields Corner, where he was involved with everything from menu creation to pastry-making to staff management. 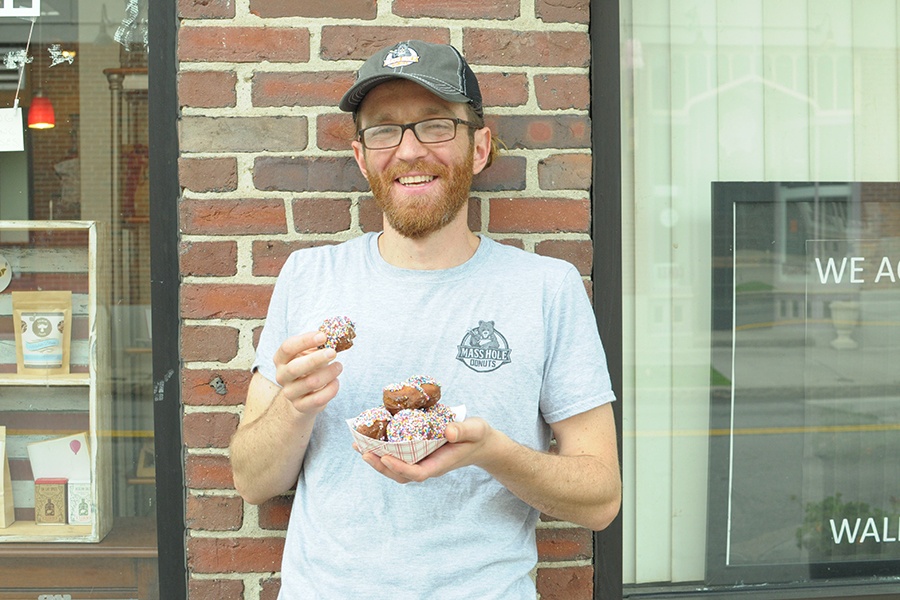 Gladstone is the former head of advertising and innovation at Boston Beer Co. He had the idea for Mass Hole Donuts while waiting to order artisan doughnuts from a well-known bakery. So many flavors appealed that he ended up buying a whole box—and then kind of regretting that choice. “I thought, wouldn’t it be great if it was a doughnut hole only?” he previously told Boston. And then he thought of the perfect name. “I’d make it a tribute to Boston and Mass.”

Mass Hole Donuts was a regular vendor at the Egleston Farmers Market in Jamaica Plain last summer, and it has popped up around Greater Boston at breweries and a variety of events, including regularly at the Local Fare. The end goal has always been opening a shop, though.

“The primary purpose of the pop-ups was to refine our products, develop our recipes, and find out what people like,” Mansfield says. “A lot of my [downtime] was spent walking around every neighborhood in the Boston area looking for storefronts.”

At about 800 square feet, the former Local Fare space is an ideal size for his needs, and it’s already licensed as a food operation, which makes the transition fairly easy, Mansfield says. Renovations will include upgrading some wiring to accomodate additional fryers, and bolstering the plumbing to support a coffee program. Mass Hole will also install a display case for its rotating lineup of 30-ish doughnut hole flavors.

The new operators have a town inspection scheduled for July 15, after which they will start taking catering and events orders again. They are hiring bakers and service staff for Mass Hole Donuts. Walk-in service begins Saturday, October 19, at Mass Hole Donuts. To start, the hours will be 9 a.m.-2 p.m. for that first weekend, before sticking to 7 a.m.-2 p.m. Thursday-Sunday. The hours will expand in the future.

This post was updated Thursday, September 26, with an opening date and hours for Mass Hole Donuts.