From a dog-friendly "Yappy Hour" to a doughnut festival and a slew of pop-ups, here's where to stuff yourself this month. 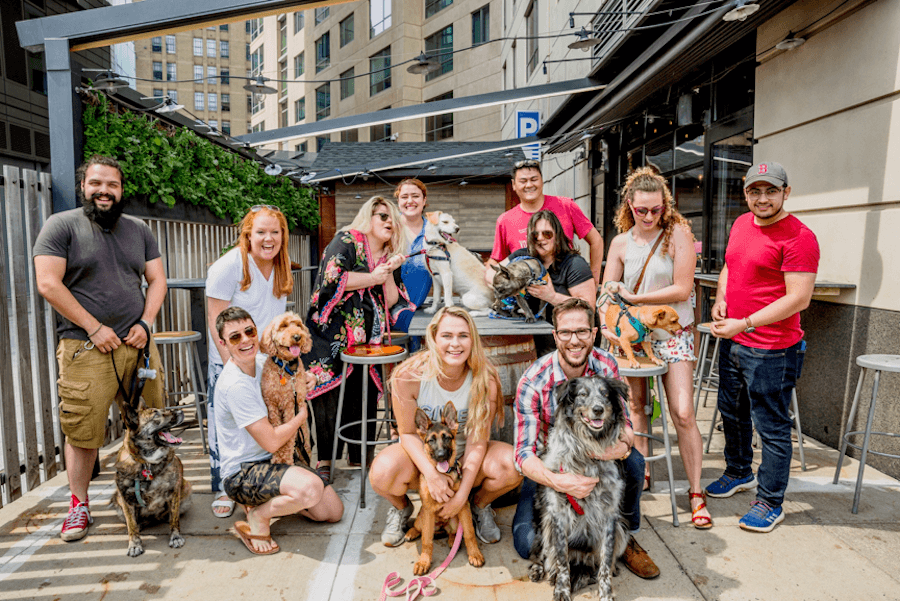 The Sweet Cheeks crew with their pups. / Photo by Mike Diskin

Yappy Hour for the MSPCA

Culinary powerhouse (and dog owner) Tiffani Faison is throwing a party for puppies on the patio of her Fenway-area BBQ joint. The aptly named “yappy hour” will benefit MSPCA-Angell, one of the largest dog rescue organizations in the country, and attendees are encouraged to bring their pooches with them. Pastry chef Dee Steffen Chinn, who just took Best Pastry Chef honors in our Best of Boston issue, will be baking vegetarian treats for our four-legged friends–and there’ll also be a biscuit bar for those of us without paws. The crew from Tito’s Handmade Vodka will be onsite as well, pouring vodka cocktails and raffling off leashes, bowls, and other doggy-themed prizes. 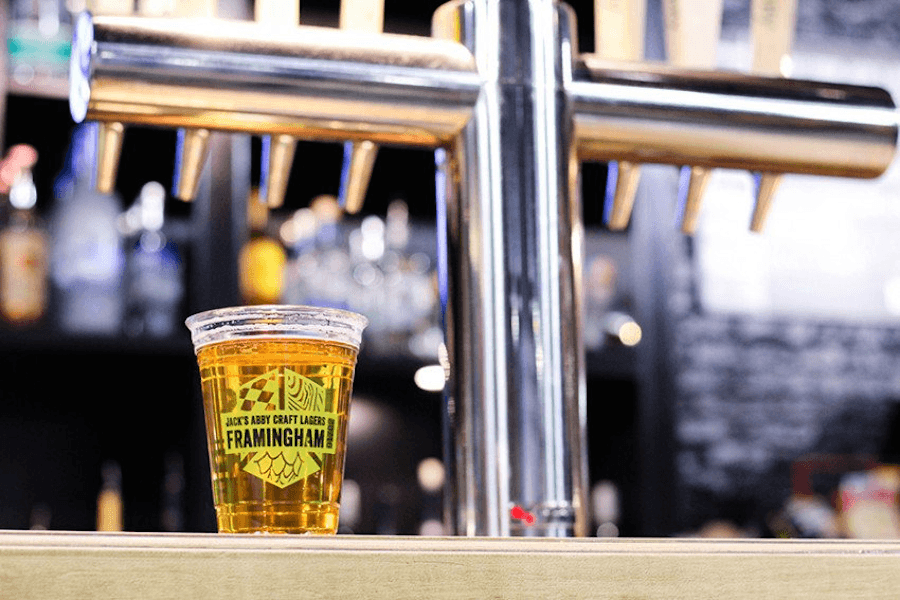 Jack’s Abby has now been cranking out brews in Framingham for eight years. / Photo courtesy of Jack’s Abby.

The much-beloved Framingham brewery is celebrating eight years in business, and they’re throwing a bash fit for the most discerning of lager connoisseurs. Jack’s Abby is taking over the restaurant half of the House of Blues, and to celebrate, they’ll be pouring an expansive lineup of their year-round and rotational brews. If top-fermented suds are more your thing, Jack’s Abby’s ale-producing counterpart, Springdale Brewery, will be serving two of their hazy, hop-forward pale ales, a nitro version of their Brigadiero breakfast stout, and the refreshing, estery Pearly Wit. Entry is free, and drinks will be priced individually. Expect live music and giveaways, including the chance to win the opportunity to brew your own recipe on Jack’s Abby’s very own pilot system, all under the guidance of their expert crew.

Brookline’s pizza and pasta haven, Prairie Fire, will host its first collaborative dinner with their friends and neighbors at Allium Market, a specialty-food grocer and cafe. The five-course meal will feature local ingredients from Allium’s extensive cheese and charcuterie selection, plus a beverage pairing. If you’ve been looking for a chance to check out these two tasty Coolidge Corner-side spots, wait no more. 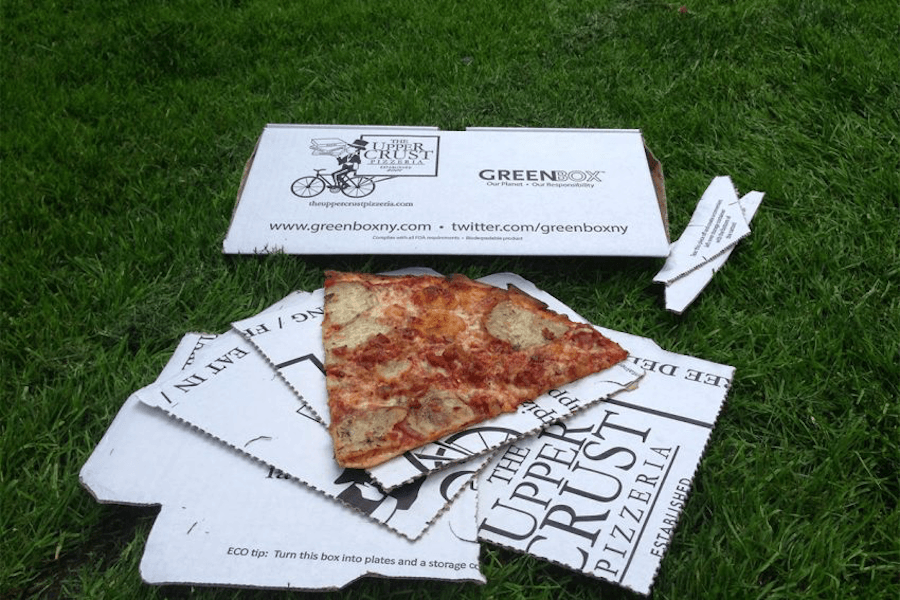 Upper Crust will be one of the pizzerias featured at Boston Pizza Festival. / Photo courtesy of Ecovention.

It’s official: Boston is a real, legitimate “pizza city.” (In fact, our food editor recently undertook a journey to find the best slice in our increasingly-competitive town.) Our pies are now receiving national attention, and some pizzaiolos will come all the way from Naples to spin dough at the Boston Pizza Festival, a two-day bash at City Hall Plaza. Stalwarts such as Regina’s and Sal’s will be joined by dozens of other vendors  from New York, New Jersey, Rhode Island, and Italy. Tickets include entry to the festival, and fresh slices will start at $2 a pop. A $50 VIP ticket will grant you early entry with unlimited pizza from 11 a.m. – 12 p.m., so you can get a pizza the action (sorry-not-sorry for that groaner!) an hour before everybody else. 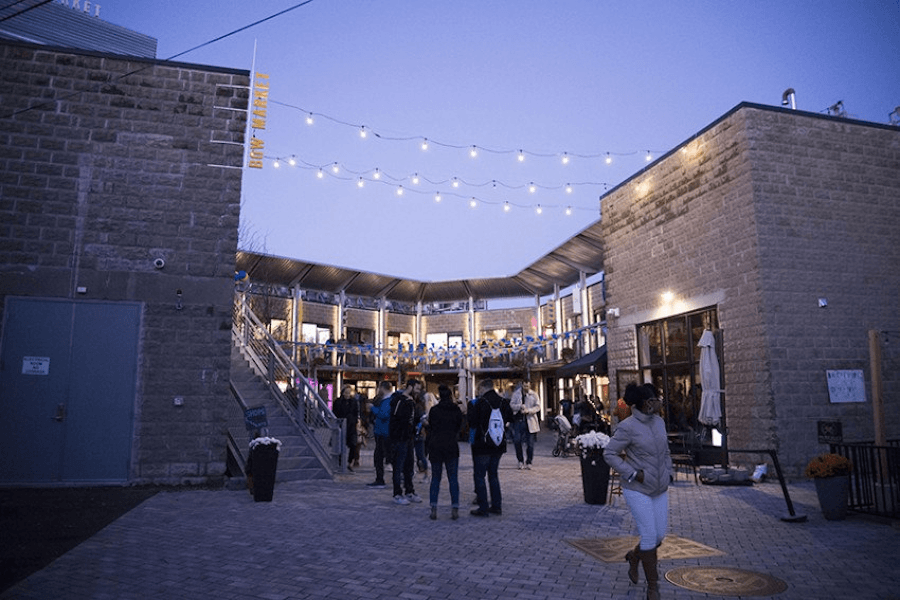 Parlez-vous français? It’d be a good idea to dust off those old college French textbooks before heading to Somerville’s Bow Market later this month. Alexandra Whisnant, the resident chocolatier at Bow, is turning the market into a Parisian picnic on Bastille Day. The place will be adorned with blankets, picnic tables, and vendors selling a wide assortment of oysters, rosé, bière, and more. If you’re looking to learn up, folks from Boston’s French Cultural Center will be on site. Plus: there’ll be a mime! Entry is free, but Whisnant and Lauren Friel of Rebel Rebel wine bar (another new Best of Boston winner) have curated specialty picnic baskets filled with fromage, a baguette, and a bottle of rosé that guests can pre-purchase before the event in mid-July. 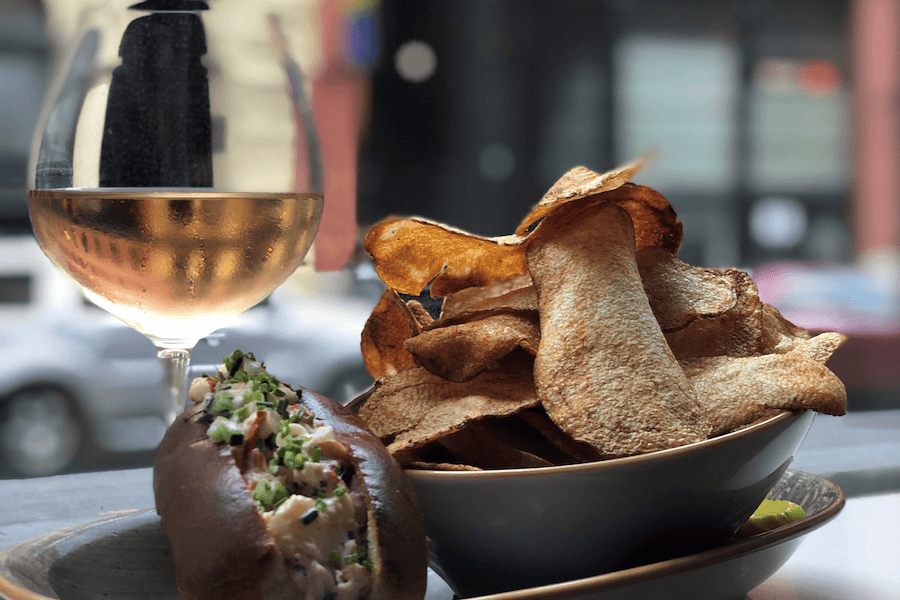 If you’ve had your fill of seafood-shack lobster rolls, mix things up with a visit to elegant Troquet on South–where the summer staple gets a bougie makeover midway through the month. For $84.35, you can partake in a three-course lobster roll dinner accompanied by six different rosé pairings. Troquet’s head chef, Tyler Strout, will serve a watermelon salad to precede the lobster roll, and strawberry shortcake will cap off the night’s provisions. Sommelier Chris Campbell will guide diners through the night’s host of rosés that will pair with each dish. If you can’t make it in the evening, Troquet will be serving a scaled-back, no-ticket-required lunch version of the meal earlier the same day. 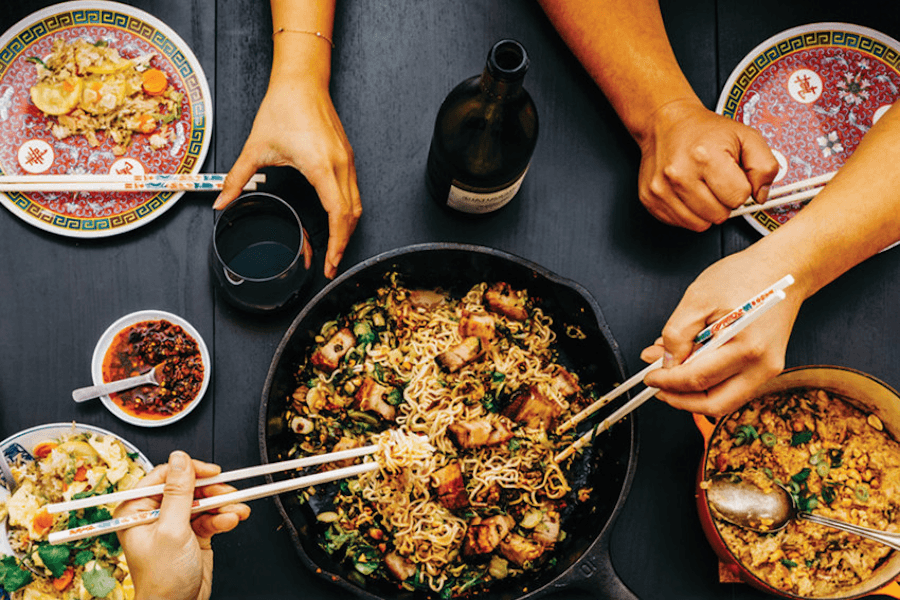 Mei Mei has undergone quite a transformation since its inception. Formerly a humble food truck with a cult following, it’s now a brick-and-mortar restaurant that has received plenty of love from the Beard awards–and our own Best of Boston nod in its fast-casual category. Despite this evolution, one thing has remained central: a staunch devotion to family. The Chinese-American fast casual restaurant (whose name means “little sister”) will be hosting a dinner to celebrate its new cookbook, Double Awesome Chinese Food. Tickets include a full family-style meal that features local produce cultivated by Boston’s Urban Farming Institute and Mama Shiang–the, well, mama of the three Mei Mei co-founders. 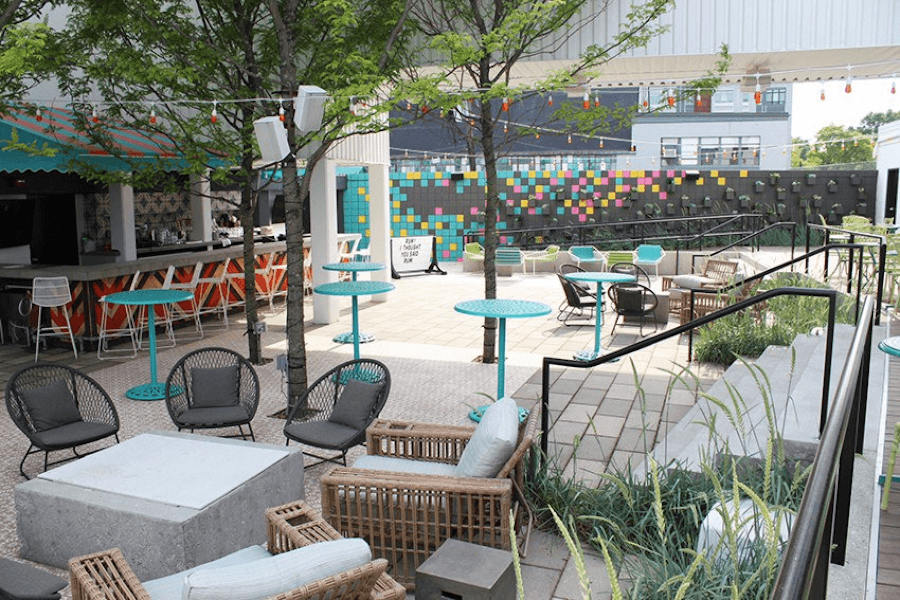 Jay Hajj, chef at the South End’s renowned Mike’s City Diner, will host a whole-hog roast at this trendy Latin American spot tucked away in lower Allston. Chef Hajj will dish up some of his own specialty accouterments to accompany the pork, and Casa Caña’s vibrant bar program will be serving rum-laden drinks deep into the night. The best part? It’s all for a good cause: A portion of the event’s proceeds will be donated to Share Our Strength, a charity that fights to end childhood hunger.

Shameless self-promotion here, but objectively speaking–this event will be awesome. Graze your way through some of Boston’s top restaurants and bars, including many that just received awards in our latest “Best of Boston” issue. Tickets will include unlimited food made by a selection of some of this year’s winners—including Fox & the Knife, Eastern Standard, and SRV—alongside other favorites. Eat, dance, and play while sipping rosé and imbibing on expertly crafted cocktails from the city’s most creative mixologists. The complete list of restaurants and bars in attendance can be found at the link below. Trust us, you will not want to miss out on this one. 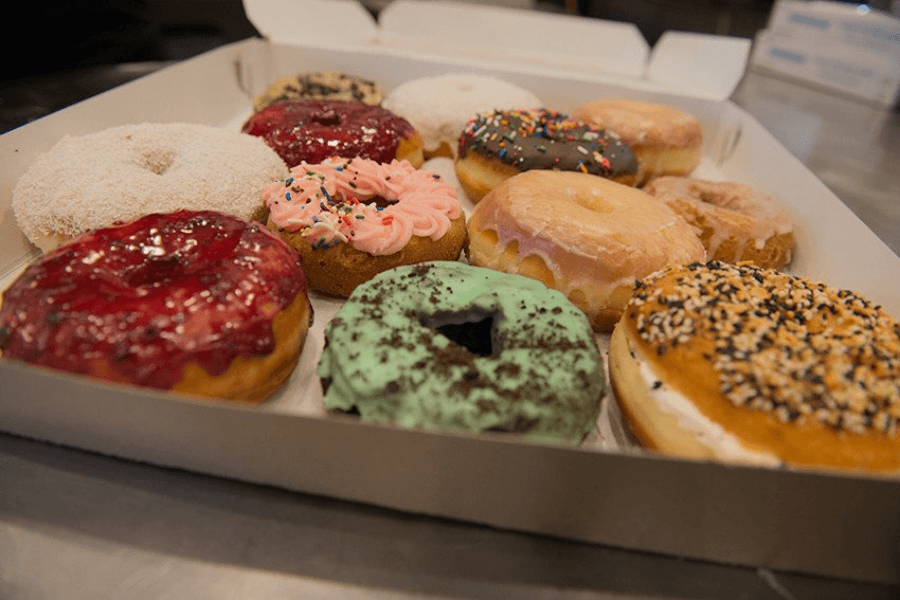 Fenway’s Blackbird Doughnuts will be served at the Boston Donut Fest. / Photo by Melissa Ostrow

Hear ye, hear ye, lovers of fried, doughy rings! This month, Underground at Ink Block—a super-cool South End park at a highway underpass—will host an entire day dedicated to Boston’s donut scene. Blackbird Doughnuts, Kane’s, and Rocco’s will be a few of the pastry purveyors on site, and a complete list of vendors can be found at the Facebook link below. A ticket will grant you entry to festival grounds, and donuts will be priced individually. DJs and live bands will bring the beats, and you’ll wash sweetness you’ll be able to wash everything down with vendor-brewed coffee. 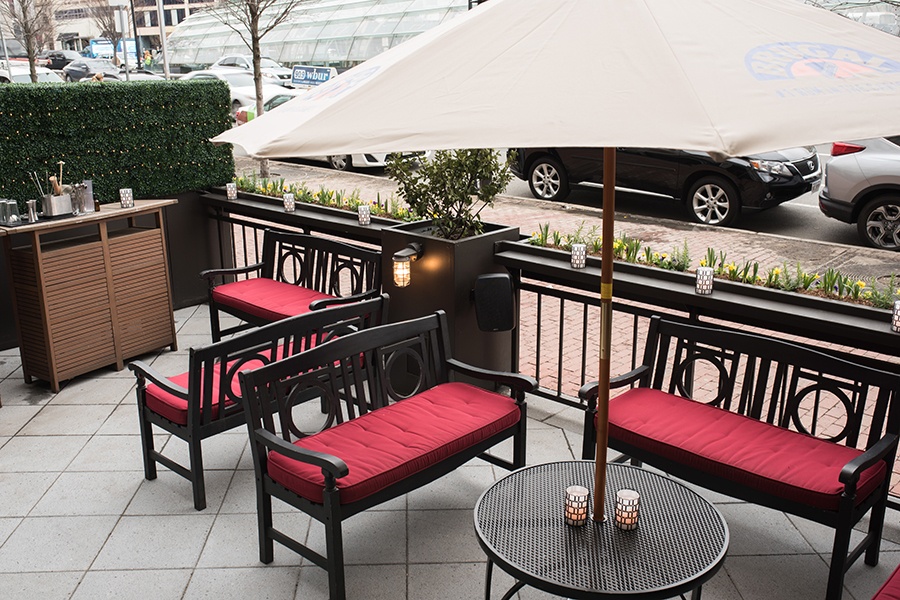 The Hunt + Alpine Club owners will make themselves at home on the Hawthorne’s cozy patio. / Photo by Emily Hagen

The Portland Hunt + Alpine Club Pop-Up at the Hawthorne

Portland, Maine’s award-winning cocktail den will travel south for an appearance on the patio at one of Boston’s hottest bars. Brianna and Andrew Volk, the husband-and-wife team behind Hunt + Alpine, will showcase their Scandinavian-inflected drink menu that has made them James Beard Foundation finalists several years in a row. This event is a part of The Hawthorne’s summer-long “Swizzle Sundays” series, which spotlights guest mixologists on the cool Kenmore Square hideaway. 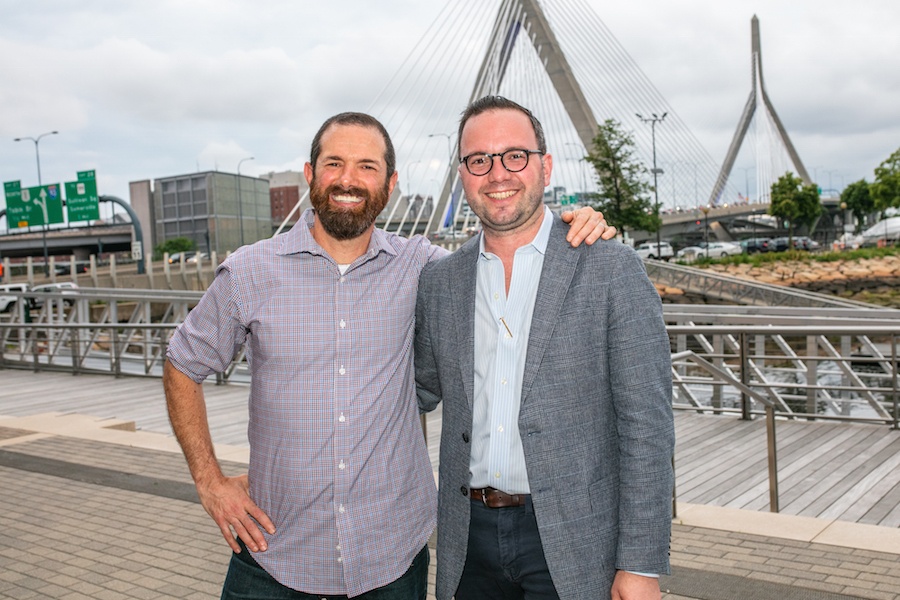 Craigie on Main Pop-Up at Alcove

This one-night-only collaboration between Cambridge’s legendary Craigie and the West End’s recently-opened Alcove has been in the making for over a decade. You see, Tom Schlesinger-Guidelli, owner of Alcove, was the beverage manager at chef Tony Maws’ Craigie on Main when that restaurant first opened. For this July pop-up, Maws will serve dishes reminiscent of Craigie’s early days (way, way back in 2008), while Tom shakes up cocktails that he perfected at his former stomping grounds. You’ll be able to enjoy cuisine from either restaurant al fresco on Alcove’s scenic waterfront patio, right by the Zakim Bridge.