Five Things to Eat at The Oyster Club at the Heritage 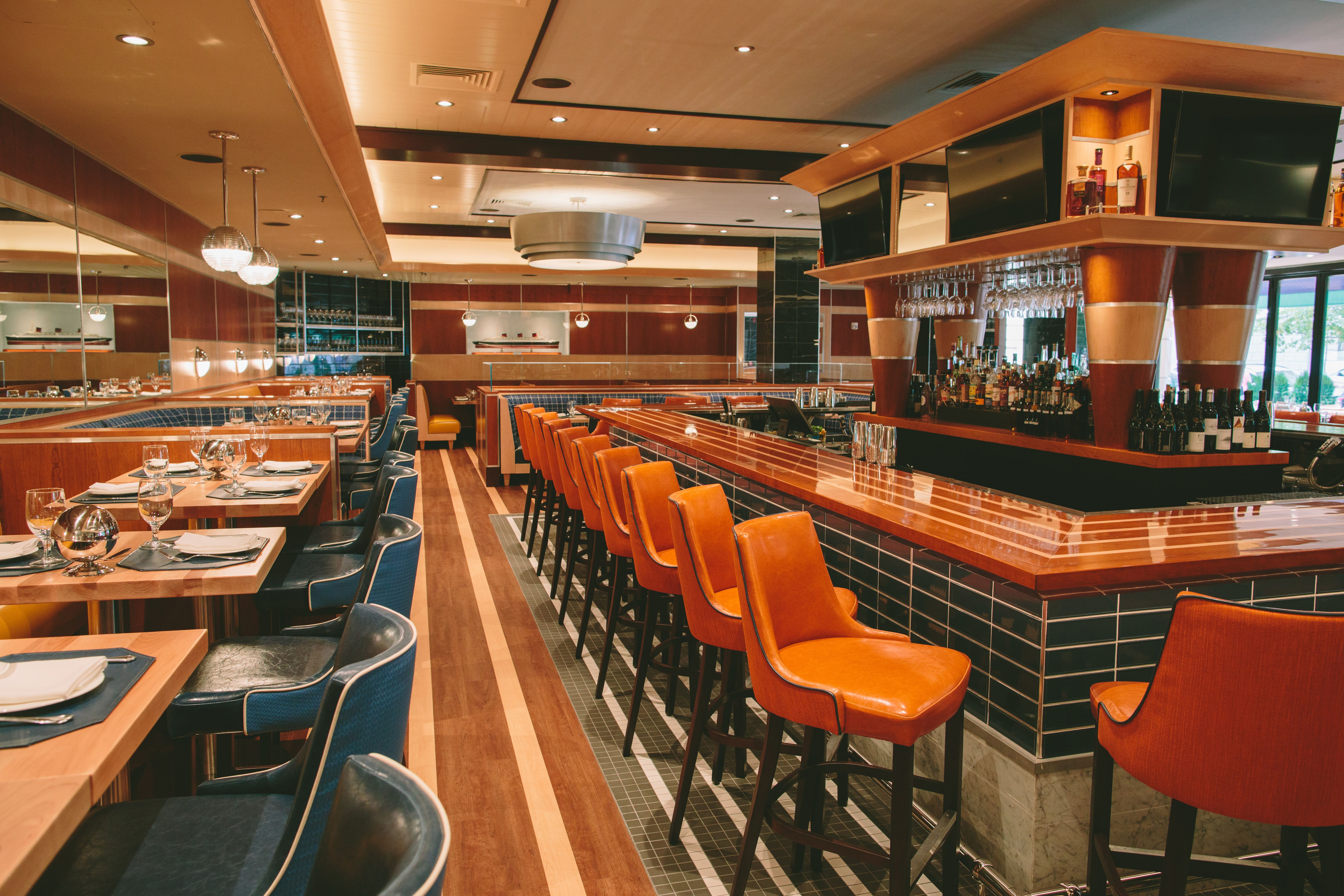 Catch a reservation at Boston’s newest seafood spot: The Oyster Club at the Heritage is now open in Park Square. It’s a return to the cuisine of New England’s shores for chef Chris Parsons, who helmed the Best of Boston-winning, now-closed Catch in Winchester before changing course to focus on American comfort food for the past decade. A fourth-generation fly fisherman, Parsons is happy to be back on the water.

“We want a restaurant that is straightforward, approachable, works with great products, and offers our riffs on classics that I think people definitely associate with Boston,” he previously told Boston.

Even the interior design takes inspiration from the sea: Nautical blues, high-gloss wood and millwork, and textured leather with preppy piping are elements meant to call to mind a luxurious Hinckley yacht. That includes a 19-seat oyster bar where guests can watch their bivalves get shucked to order.

Along with the robust raw bar, there is a new contender for an ultimate Boston lobster roll—Parsons’ cold version is amped up with a slightly smoky tasso ham mayo—as well as lobster of the day specials ranging from Monday night lobster tacos to Sunday morning lobster Benedict. (Those specials begin the week of August 5.) But after the first full week of service, we asked Parsons to highlight some under-the-radar (sonar?) dishes that represent his perspective on essential New England seafood. 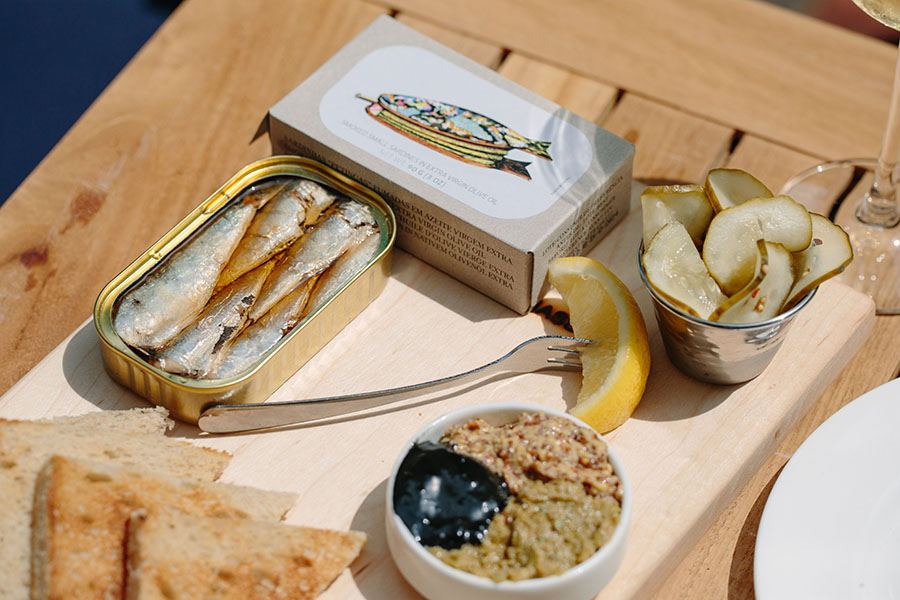 Start a meal at the Oyster Club with a tin or two of seafood and some raw bar selections, and it’s smooth sailing. / Photos by Brian Samuels Photography

The Oyster Club is the latest place in Boston to get on board with smoked, potted, and otherwise preserved seafood. Served with toast, crackers, lemon, and pickled onions, options like these smoked small Portuguese sardines in olive oil are just “really great bar food,” says Parsons. It’s also a great conversation starter: “The boxes are each a work of art, so we try to take a lot of care with our presentation to do the seafood and the art justice.” Start with a tin or two, some oysters on the half-shell, and maybe a cocktail (each drink is named for a different type of fishing lure)—it’s smooth sailing from there. 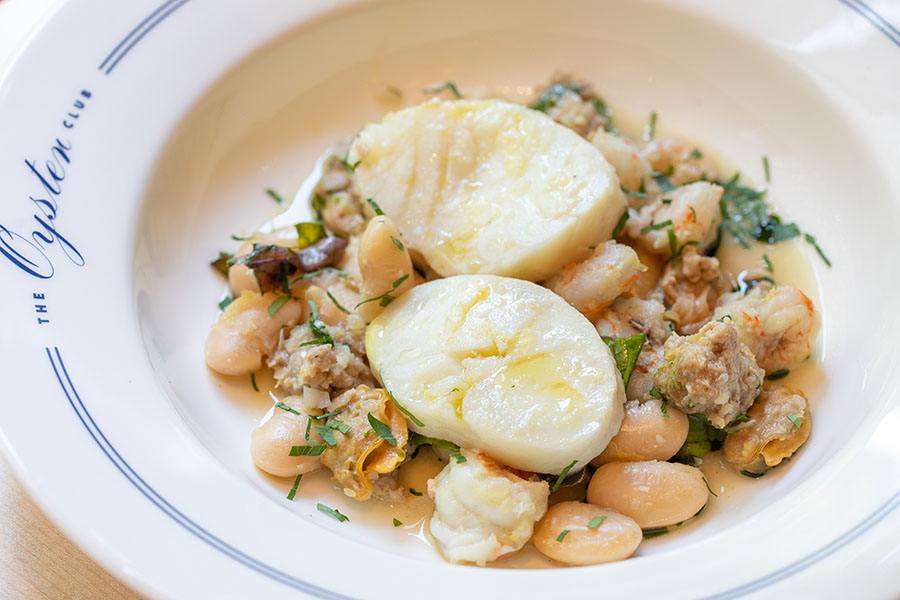 The Oyster Club’s cod and clams is a classic preparation for a reason: It’s delicious. / Photos by Brian Samuels Photography

Parsons’ version of this Portuguese-by-way-of-New England flavor combination features gigante beans and fennel-scented sausage. It’s one of the Oyster Club’s pan roasts, a section of the menu meant to highlight the seafood itself. “This is a New England classic—we are just keeping it real and simple here,” Parsons says. “The beans are a buttery, creamy element. The saltiness of the clams and the meatiness of the sausage, and the cod has such a delicate texture—it’s a winner. I think it’s why it’s been around so long.” Another standout is the oyster pan roast, inspired by the historic New York oyster house Thomas Downing’s, which Parsons learned about while researching the Oyster Club menu. The chef says, “It’s a hats off to Thomas Downing,” who was an African-American restaurateur in the 19th century. “He was doing things not a lot of people were doing.” 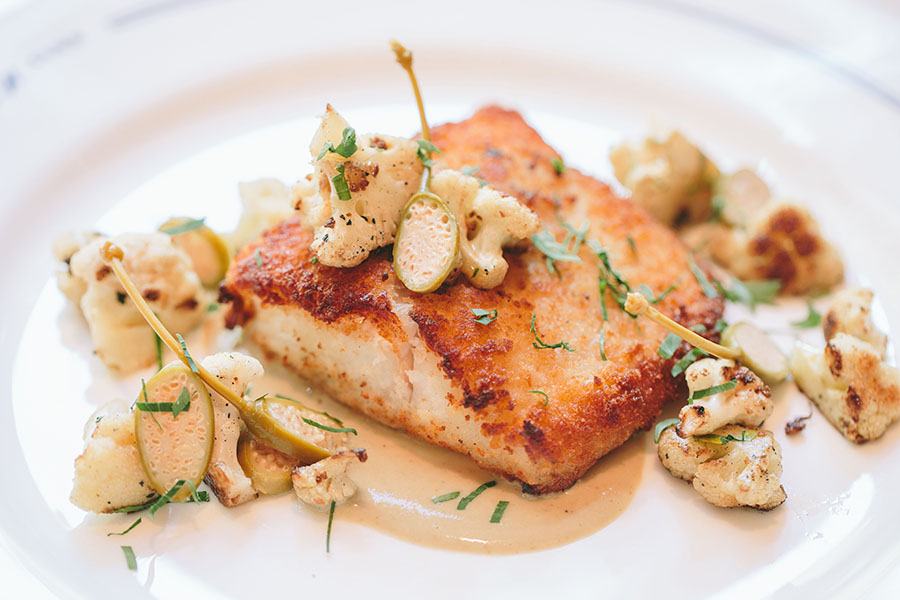 The thinness of summer flounder coming from the Atlantic inspired this pounded veal-like preparation. / Photos by Brian Samuels Photography

When the beautiful summer flounder landed on Parsons’ work station fresh from the Boston Fish Pier, the fish’s thinness reminded him of the pounded veal fillets he loved working with during his time at the Italian-leaning Somerville restaurant, Fat Hen. “It led me down that [Milanese-inspired] road,” he says. Lightly breaded, pan-roasted, and served with tonnato sauce, cauliflower, capers, tomato, and parsley, “it’s the same dish, essentially”—just done up for summertime. The preparation “lets the flounder speak for itself,” Parsons says. 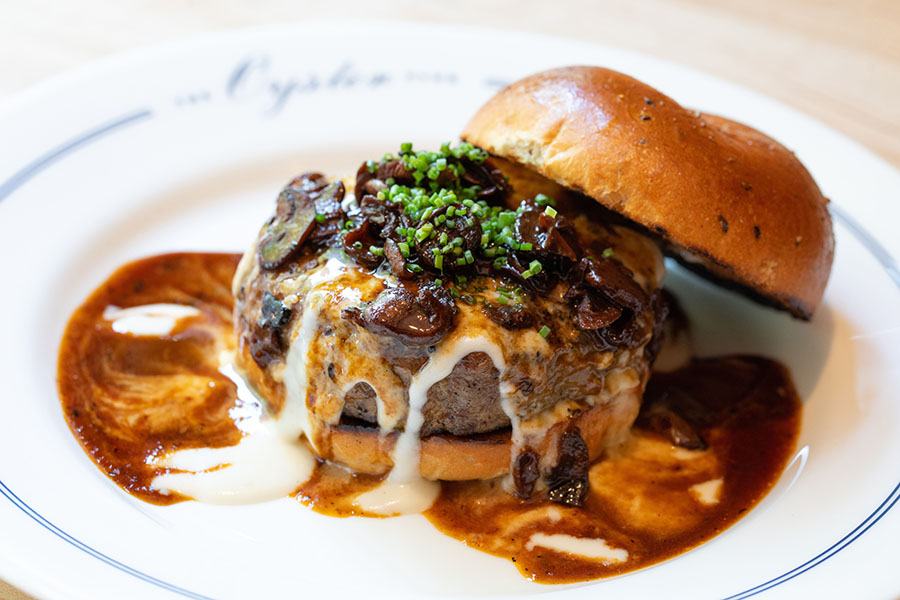 The bistro-inspired burger at the Oyster Club requires a fork and knife. / Photos by Brian Samuels Photography

With more than 100 seats and a prominent location near the Boston Public Garden, the Oyster Club expects to welcome a broad range of guests—including some who just don’t want to eat seafood. Since it’s open daily for lunch and dinner, Parsons wanted to have a “user-friendly” menu with options appropriate for any time of day. That’s why there are a few sandwiches besides the lobster rolls, including a fried-chicken number inspired by the chef’s forthcoming Cambridge restaurant, Lily P’s, and a beefy burger laden with mornay sauce, red wine-braised button mushrooms, and veal demi-glace. Parsons says the adaptable, all-day menu setup is inspired by classic French bistros, a type of restaurant he loves—including, for the house burger in particular, chef Jamie Mammano’s Bar Lyon in the South End, as well as Trois Mec, a Los Angeles bistro by chef Ludo LeFebvre. Parsons uses dry-aged Pat LaFrieda beef, the same rich meat comprising the Bar Lyon burger; and the very French toppings are inspired by an article he read about chef Ludo. “I think this will become a classic at The Oyster Club,” Parsons says. 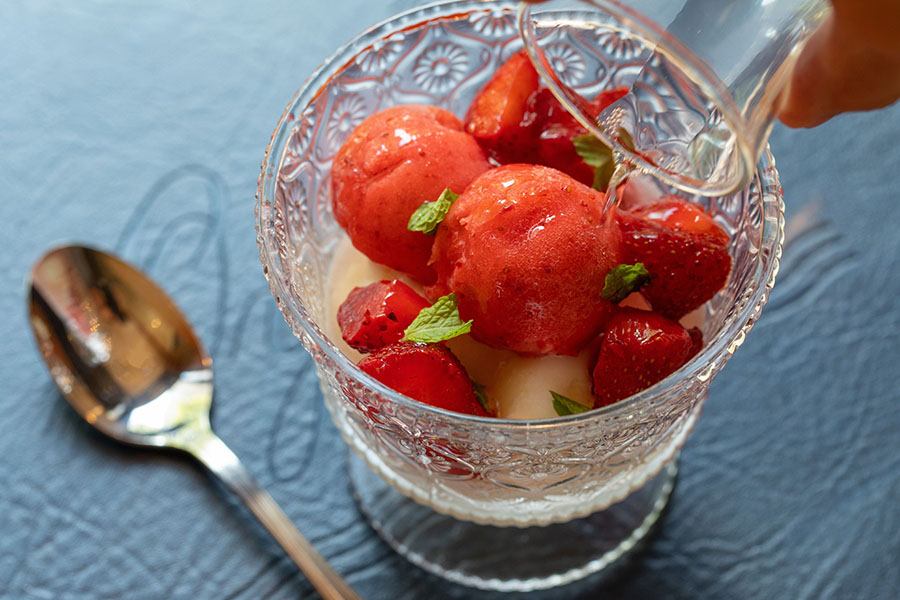 The summer fruit will change as the season wanes, but this dessert with Toscanini’s sorbet is like an adult-friendly float.

Parsons’ team doesn’t include a dedicated pastry chef, so to satisfy guests’ sweet tooth, he’s tapped some outside pros: The Oyster Club serves Toscanini’s ice creams and sorbets. This fresh, seasonal sorbet option is like a float for adults, thanks to the tableside pour of Bisol Prosecco. The brut isn’t too sweet, so it’s a good foil for the peak-season fruit from Ward’s Berry Farm. “Strawberries are starting to go out of season, so we’ll transition to other summer berries,” Parsons says. “I’m actually going to the Copley farmer’s market this afternoon.”