Located in Florence just off of the Northampton Bikeway, the destination cider house showcases New England apples on tap. 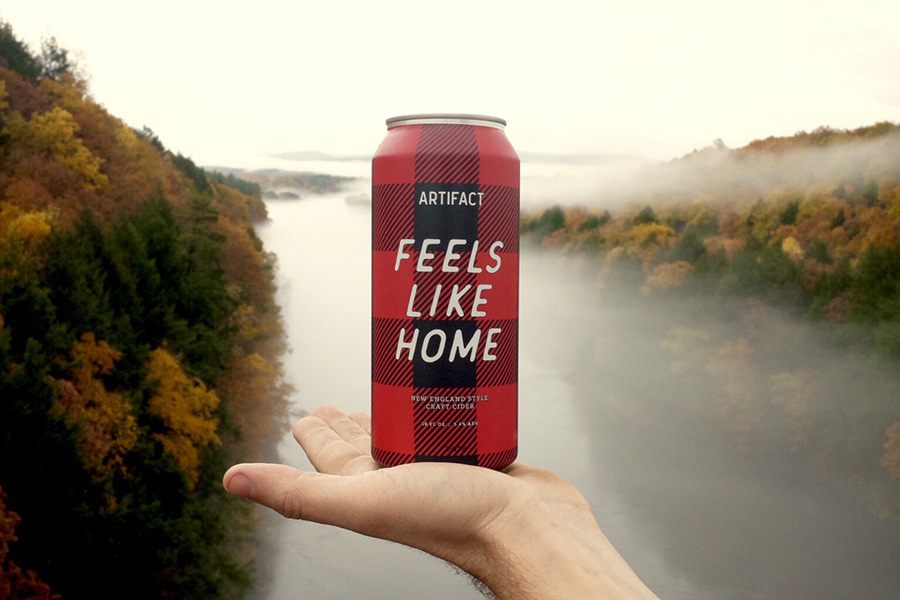 To riff on the name of one of its popular releases, Artifact Cider Project now “feels like home” at its new location in Florence, Mass. / Photo provided by Artifact Cider

Cider fans are now able to sip some of the finest expressions of New England cider available, right near the source: Artifact Cider Project has a new taproom in downtown Florence, a Northampton village near the Western Massachusetts orchards where many of Artifact’s cider apples are grown. The taproom, which also offers a snack menu by field-to-table caterer Wheelhouse Farm, opened to locals this past weekend, and the official grand opening kicks off this Thursday, August 8.

Artifact’s minimal aesthetic features whitewashed walls with a green-flecked accent wall and plenty of live plants inside the space. The bar and tables are rustic, natural wood; and there are wooden barrels full of cider projects visible throughout the space. The Daily Hampshire Gazette was in the house this past weekend and shares first-look photos on its website.

Artifact launched in 2014 in Springfield before expanding to a larger production space in Everett, where it briefly hosted low-frills, free tastings select Saturday afternoons. The company has grown from about 500 cases of cider produced in its first year to 40,000 in 2018, and it has plans to grow even more out of its new facility in Florence. The company’s well-designed, matte cans are now available throughout Massachusetts thanks to a distribution deal with Massachusetts Beverage Alliance.

But this is the first time the company has had a dedicated taproom and retail space to showcase its apple-forward ciders. 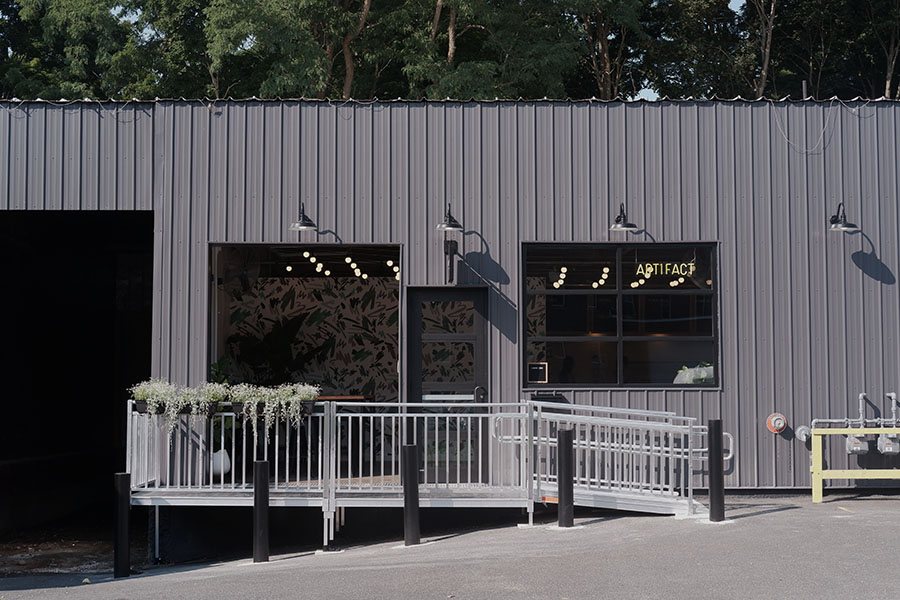 It’s the right time, says Artifact cofounder and cider maker Soham Bhatt. In the not-so-distant past, U.S. drinkers had narrow ideas about what hard cider is—a sweet, boozy beverage that appeals to non-beer drinkers, and costs less than wine. Those days are over, thanks in no small part to terroir-driven New England makers like New Hampshire stalwart Farnum Hill, Shacksbury Ciders of Vermont, and Artifact sharing dry, funky, and nuanced ciders.

Rather than reviving historic cider styles, or innovating with additive ingredients like other fruits, “my approach to [modern cider-making] has been about apples, and pushing the boundary of you can do with them,” Bhatt says. For Artifact, that means sourcing the best cider-making apples from orchards like Pine Hill in Colrain, and others around Massachusetts, New Hampshire, Vermont, and New York, and applying cider-making techniques from Spanish, French, and other heritage cider cultures to reinvent the New England cider industry.

“It’s an exciting thing, because we started in Western Mass. and there is a lot of love for us out there,” says Bhatt, a Cambridge resident. It’s “particularly gratifying,” Artifact partner and Amherst resident Jake Mazar adds, “for us to be a permanent part of the area and community that has supported Artifact from the beginning.”

But the taproom is “not only for cider fanatics,” as Mazar told the Daily Hampshire Gazette. It’s “also for someone nearby wanting to come by for a drink and food.”

Mazar’s other company, Wheelhouse Farm catering, has created a simple menu of seasonal flatbreads for the taproom. For the summer, it includes chorizo with roasted cherry tomato pesto, fresh corn, and mozzarella; a vegetarian option with mozzarella, feta, fresh corn, zucchini, cilantro, and lime juice; and a cheese pie with light red sauce, herbs, and chili oil. There are also chips available for purchase.

The bar is equipped with 14 draft lines, and has seven ciders flowing this weekend. Along with varieties already familiar to Artifact fans, such as Wild Thing, a dry cider comprised of all McIntosh apples; and Feels Like Home, a juicy cider fermented on rum-soaked oak chips, the taproom will showcase limited-batch ciders and special projects, like Rox, a modern expression of Roxbury Russet, America’s original cider apple; and Between A Rock and A Hard Place, a blend of Roxbury Russet and American Foxwhelp apples, fermented in second-run French Chardonnay barrels and aged for nine months on the lees (a French sparkling wine-making technique).

Ciders are available in four-ounce samples, or full 16-ounce pints. Artifact will serve select bottled projects by-the-glass for in-house consumption, and has cans, bottles, and merchandise to take home, as well. The taproom is now open Thursday-Sunday, from 5-10 p.m. on Thursdays and Fridays, noon-10 p.m. on Saturdays, and noon-6 p.m. on Sundays.