An Eclectic, Global Cocktail Bar Pops Up at the Merchant

This weekend through September 21, stamp your passport at Foreign Correspondents Club to try a world of new drinks. 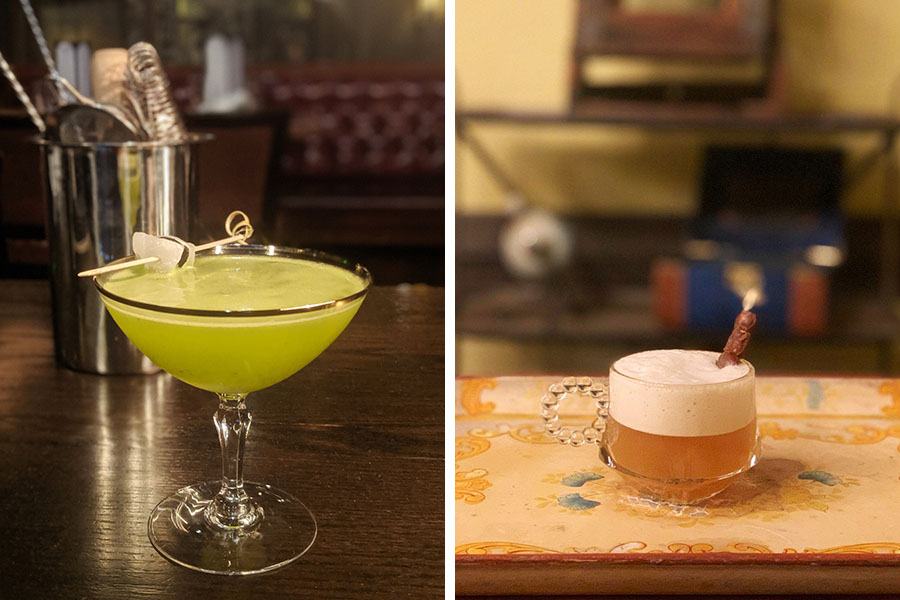 Konbini Cocktail and Treaty of Manila are two of the globally inspired drinks on the menu at Foreign Correspondents Club. / Photos provided

The newest cocktail bar in Downtown Crossing is hidden below a boisterous brasserie, but don’t call Foreign Correspondents Club a “speakeasy.” An ephemeral new concept located in the basement of the Merchant, Foreign Correspondents Club is a pop-up, global bar showcasing spirits from around the world, and encouraging across-the-table conversations. FCC opens this Friday, August 9, before jet-setting with more weekly hours through September 21.

To Bryan Ames, bar director at the Merchant and creator of this new cocktail club, a speakeasy is a dark, secluded space to go for a craft cocktail, and maybe to interact with the bartender or a date. His latest concept, while tucked away and tiny like a hidden bar, is nevertheless a sociable gathering place to meet new people and discover new drinks.

“I wanted to create a space for people who love to travel to come and be nostalgic and share stories,” Ames says, who adds he’s “been lucky enough to travel extensively.” Around the world, he’s learned about traditional drinks and flavors, like mastic (a piney ingredient from the Mediterranean), aquavit (Scandinavian grain liquor), and tsipouro (an un-aged Greek brandy). At Foreign Correspondents Club, he’ll use these spirits and more to imbue a sense of place in every drink.

On the opening menu, head to Japan with the Konbini Cocktail, made with green tea shochu, lemon, white miso, Japanese knotweed honey, and matcha powder; sign the Treaty of Manila, with Don Papa rum, tamarind liqueur, coconut water, curry power, and an egg white; or travel Fifty Five Hundred Miles—the length of coastline along Chile and Peru, and the name of a drink with aged pisco, camu camu syrup, lemon, and quinoa broth.

“I am using [ingredients] you would naturally find in the country to get a fuller sense of what that region is like,” Ames says.

There are a couple Hungarian wine options, which Ames is into thanks to the owner of the Merchant’s wife, who is Hungarian. These vintages are uncommon on bottle lists, “and we think that our guests will enjoy this exposure to a new region,” he says. Saigon Export is the one packaged beer option.

A former private dining room at the Merchant, FCC will still be available to host occasional private events for 30-40 people. “It looks like it could be any person’s bar anywhere in the world,” Ames says, with a world map hanging behind the bar, and vintage carts stocked with travelogues, drink-making equipment, and timeworn trunks and tchotchkes. “It doesn’t feel like you’re in Tahiti, Iceland, Germany; it feels like you can be in any of those places. It looks reclaimed, fun, and funky.” Though the theme is global, local businesses like Longleaf Lumber, Sift Organizing, and Downstairs at Felton Antiques helped with Ames’ vision.

“Being a travel-themed bar, a lot of things change in quickly. We thought, let’s get people exposed to the overarching concept of the FCC—which is, let’s go drink interesting stuff people may have not even heard of—then let’s reset and see what can we do to push the boundaries,” Ames says. “We already have plans for what 2.0 is going to look like.”

Book your ticket to Foreign Correspondents Club now through September 21, and follow along on its journey to see where in the world it will go next.