Shy Bird Has Landed in Kendall with Wine, Coffee, and Rotisserie Fare 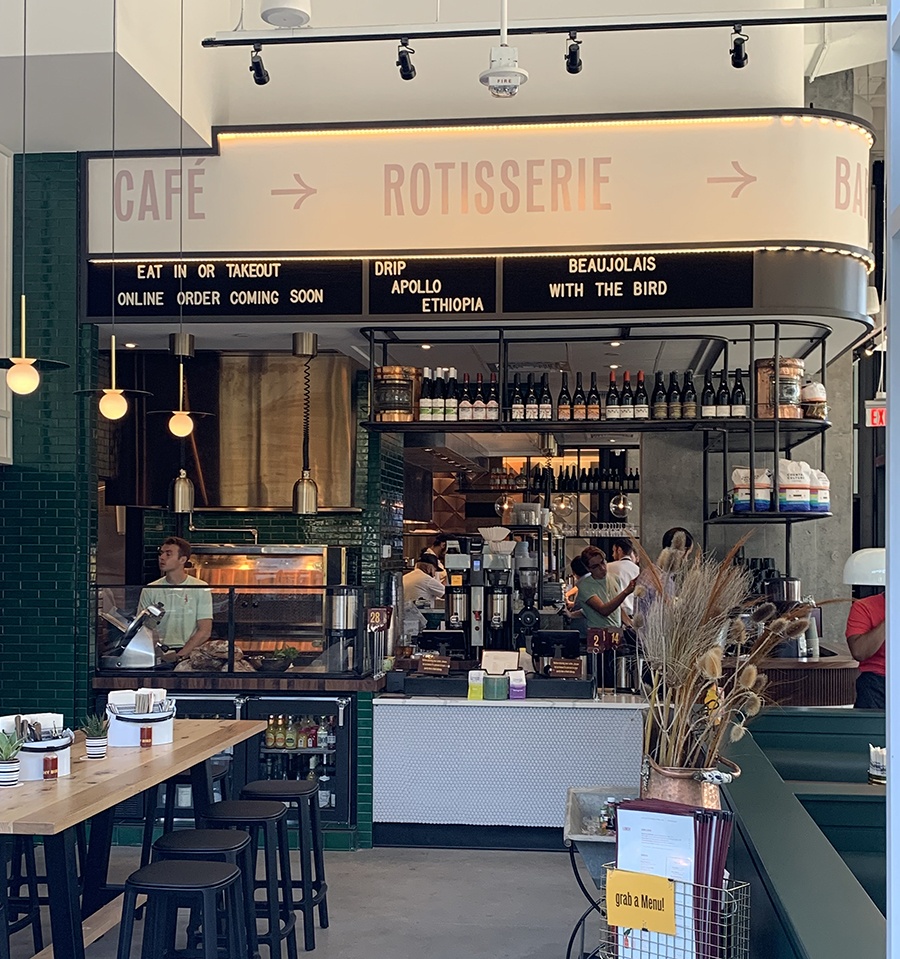 A Boston hospitality pro has hatched an all-day café in Cambridge. Shy Bird—the latest from Branch Line owner Andrew Holden—threw open its garage doors during lunchtime on Tuesday, Aug. 20, and is now serving up espresso and breakfast, rotisserie meats and sandwiches, and wine, cider, and beer in a modern, counter-service setting. It also has outdoor seating along Broadway.

The highly anticipated anytime-restaurant, situated on a prominent corner in Kendall Square, fills a few needs for Cambridge commuters, Holden says. He speaks with the authority of an 11-year East Cambridge resident, who for even longer has managed Kenmore Square go-to, Eastern Standard Kitchen & Drinks. (Along with his longtime ESKD boss and hospitality mentor Garrett Harker, Holden cofounded the Watertown rotisserie, Branch Line.)

Like ESKD, Shy Bird is open from morning into night—without breaks in service. The breakfast menu is available from 7-11 a.m. daily (8 a.m. on Saturdays and Sundays), lunch runs from 11 a.m.-4 p.m., and dinner is served from 4-10 p.m. (11 p.m. on Fridays and Saturdays). The bar can stay open until midnight.

During lunch and dinner, Garland makes good use of a spit grill, just as he does at Branch Line. Among the rotisserie options is a signature “lunch plate” of light- or dark-meat chicken, served with a house-made sauce and dressed greens; as well as prime beef brisket, roasted cauliflower, heritage pork ribs, and more a la carte options during dinnertime. Of course there are sandwiches, and they’re filled with the likes of roasted cauliflower and crispy onions; and slow-roasted pork and aged provolone. There are also lunch- and dinnertime salads and small plates, including a redux of Branch Line’s signature sugar snap peas with almond vinaigrette, mint, and ricotta. Check out the full opening menus below.

Branch Line alum Shaun Brideau is in charge of the wine and coffee programs; Shy Bird is serving Counter Culture roasts. James Child, formerly of Southern Proper and the Kirkland Tap & Trotter, created a small menu of signature cocktails. The bar opens daily at 10 a.m. with drinks like Shy Lady, a hibiscus-scented Hendricks Gin and tonic; an Alpine Highball, with sherry, chartreuse, lemon, and mint; and the vodka martini-like Dirty Birdy, made with herb-infused brine. Espresso, cold-brew, a selection of teas, and soft drinks like strawberry lemonade and honey soda are available at all hours.

Shy Bird is located off the lobby of One Broadway, on the ground level of the Cambridge Innovation Center, at Third Street and Broadway. The 80-seat restaurant is part of new, MIT-led renovations that will also bring a Brothers Marketplace to Kendall Square. It’s “a really special corner that will continue to be an important part of the neighborhood as it continues to grow,” Holden says.

Washington, D.C.-based architecture firm HapstakDemetriou led the buildout and designed the space, which looks modern and hip with emerald subway tiles, pendant lighting, and sleek black trim against light wood tabletops. There is a wall of banquette seating with bar-height stools, and about 20 more seats outside. “It’s meant to feel equally comfortable during the day, afternoon, and night,” Holden says. 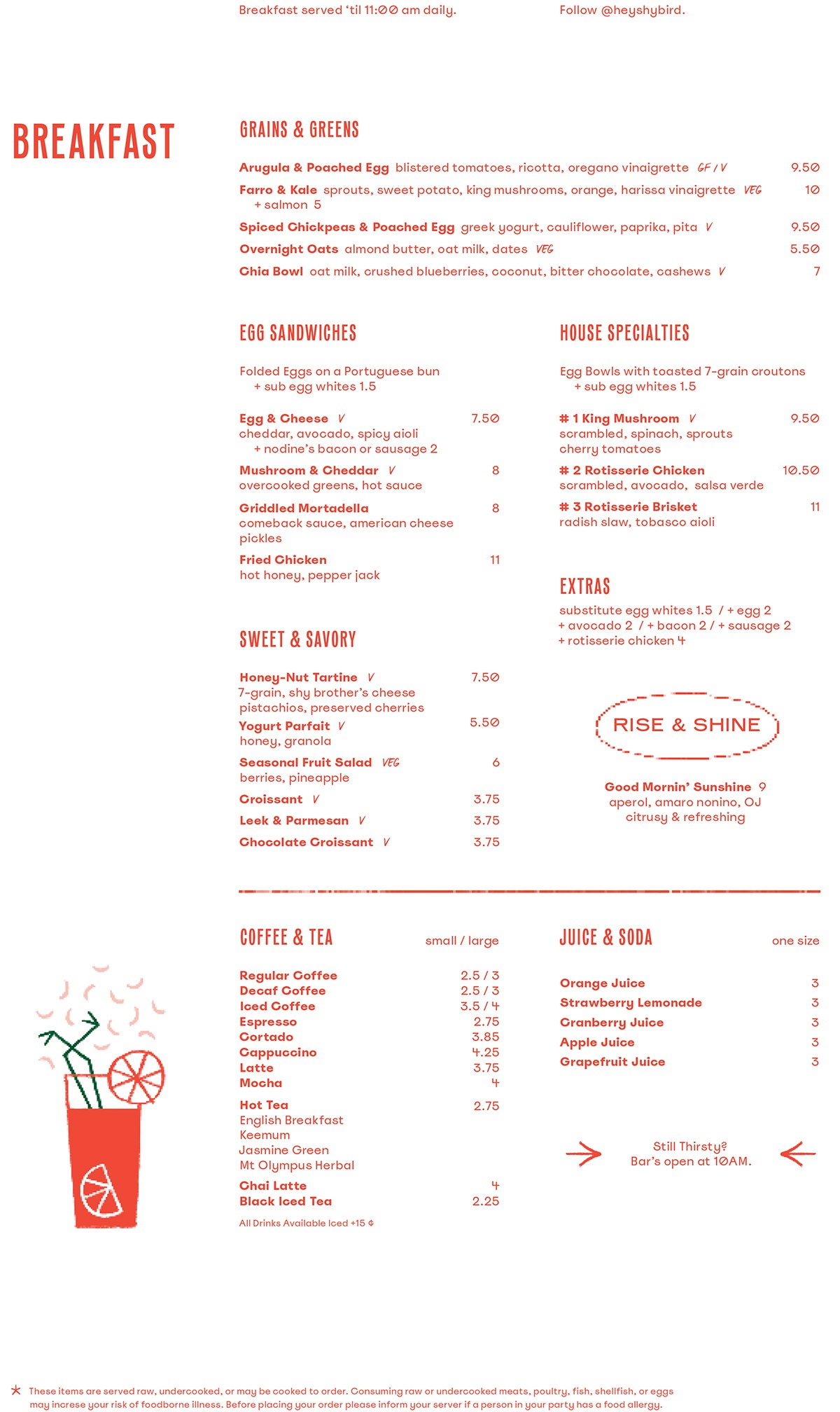 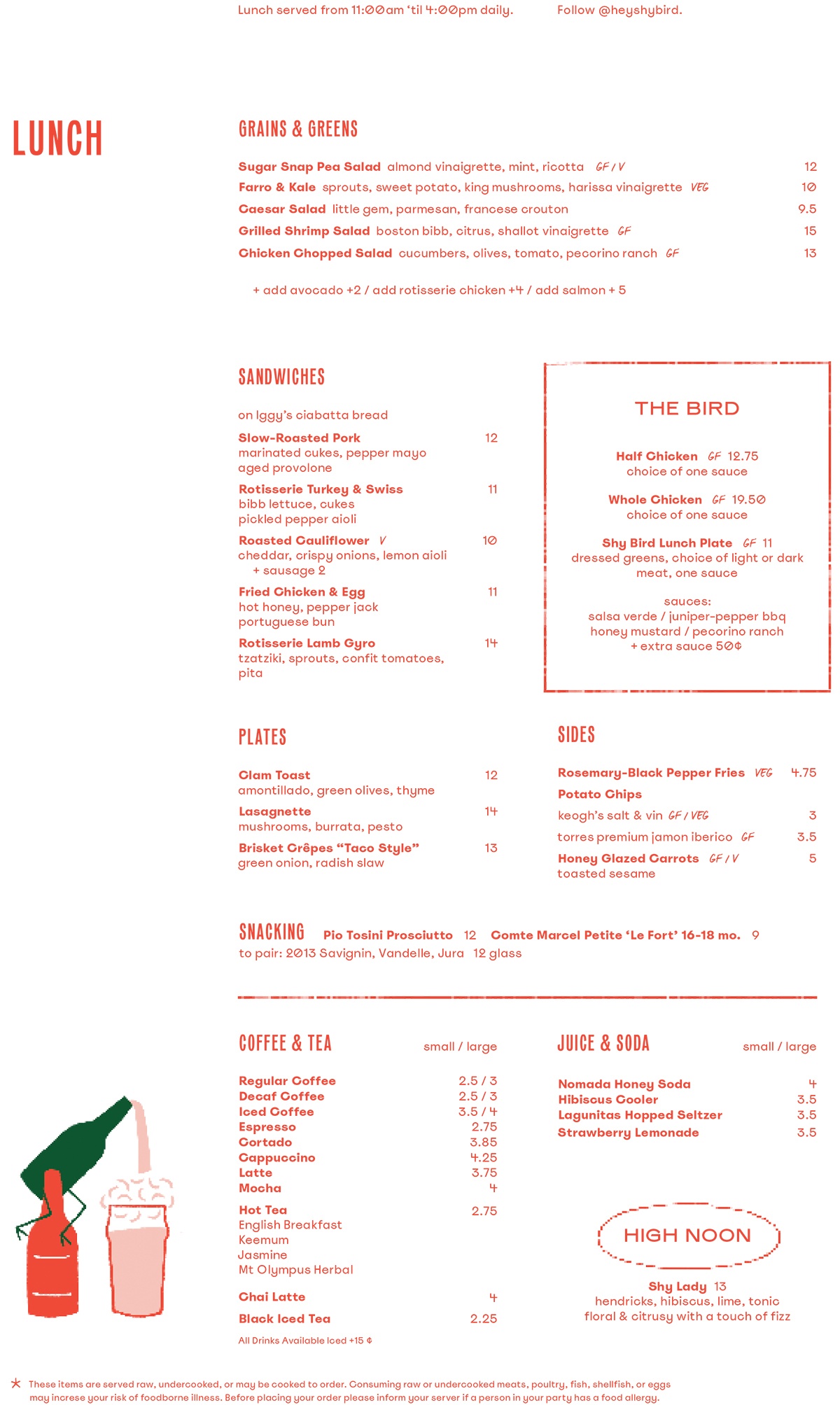 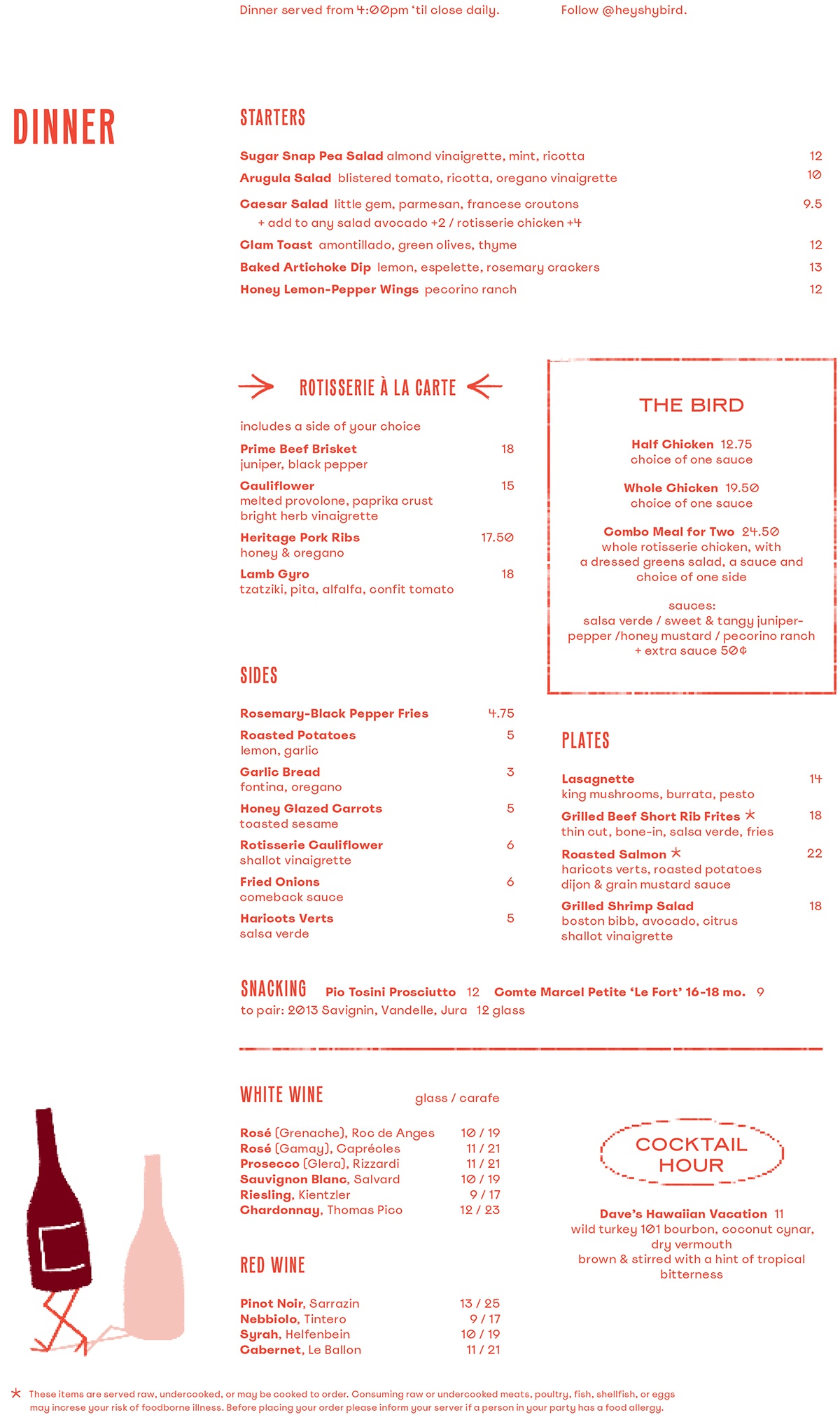