Dining Out: Zuma in One Dalton Tower

Zuma, a posh Japanese restaurant in Boston’s newest skyscraper, is a throwback to the luxury of the 2000s. But is that really such a bad thing? 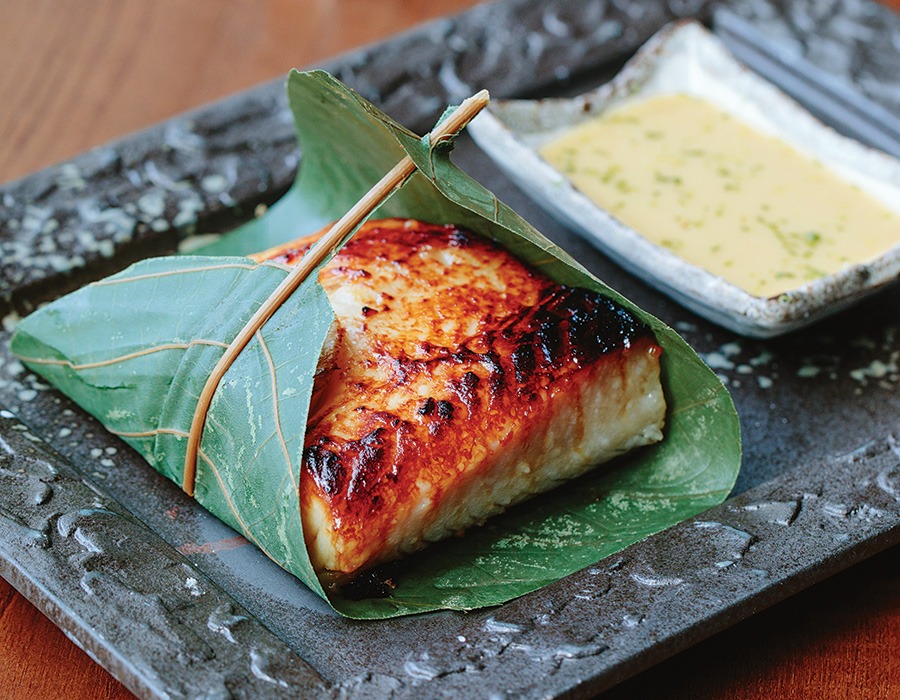 Magnolia-leaf-wrapped cod is a signature dish at the swank new Zuma. / Photo by Brian Samuels Photography

When Zuma, a swank Japanese izakaya with outposts in 14 international cities, opened inside the Back Bay’s new Four Seasons One Dalton tower in May, it arrived with expectations as high as its jet-setter-crowd price points. It also raised a few eyebrows: Would a clubby enclave for the elite fly in Boston, with its small-town feel and historical aversion to ostentation?

The answer: Zuma won’t be for everyone. (More accurately, it won’t be for everyone’s wallet. Parsimonious diners should protect their blood pressure elsewhere.) But whether I’m reviewing a $2 taco or a $200 tasting menu, the central question I ask is always the same: Does this restaurant accomplish the goal it has set for itself? Zuma does, for the most part. The menu is more akin to the luxury restaurants of the aughts, when the brand was founded, than to modern fine-dining bastions, and so the Boston enterprise will probably be best-loved by wealthy globetrotters who refined their palates and bank accounts in the previous decade. But not just. There is some evolution here, particularly in the superlative service and bar program, both of which feel like au courant contrasts to the menu’s largely throwback playlist.

The second-floor space itself is a contemporary stunner. Buffed wood crawls up walls to high ceilings. Skyscrapers outside wink back sunset through floor-to-ceiling windows. The soft light pools onto shiny dark tabletops and gleams off custom pottery stacked at the three open “kitchens”—including a sushi bar where cuts of fatty tuna perch like pearls on gems of ice—as well as a grandiose robata grill wrapped by first-come, first-served bar seats. 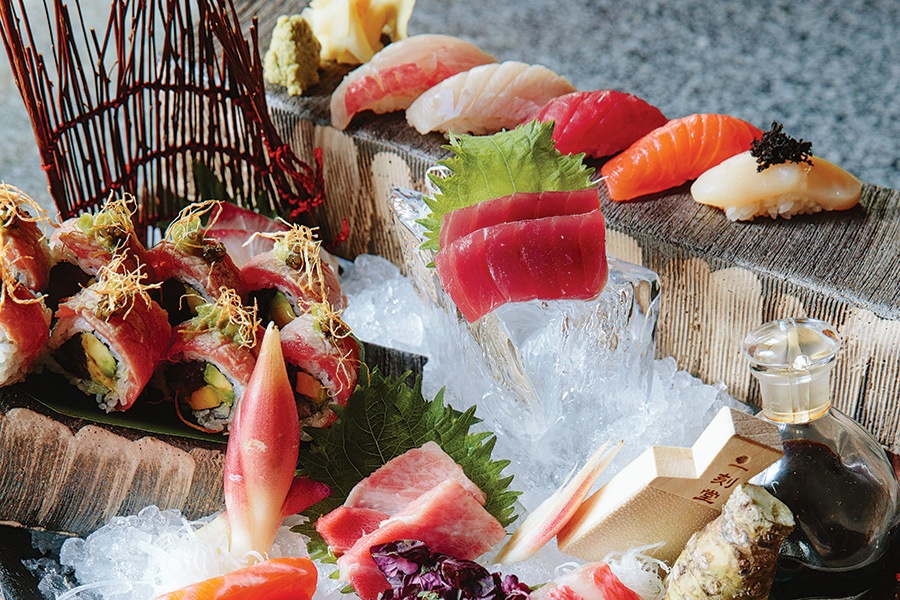 The sushi and sashimi contribute to the restaurant’s rep. / Photo by Brian Samuels Photography

Wherever I was posted, I found solid food—and an occasional lesson on early-millennium clichés done, actually, quite well. Spicy fried tofu, for instance, was a dated, panko-crusted dipper with silken insides fringed with sticky-sweet chili-soy sauce—and you know what? Still tasty! Zuma’s sushi and sashimi deserve their upper-echelon reputations; even the California roll ($14), ubiquitous enough now for airports, reached its peak with Alaskan snow crab and the briny pop of generous tobiko. And though miso-marinated cod long ago became a frequent preparation in Western takes on Japanese cuisine, it is seldom done as well as Zuma’s now-signature fish dish: The robust black cod steak ($41), marinated in velvety saikyo miso and folded in a Japanese magnolia leaf, was sublime and restrained beside the menu’s more elaborate fare (just ignore the too-sweet dipping sauce).

Other dishes were winners even without indulging in nostalgia. The spot-on roster of salads included a deep bowl of fat, delightfully snappy asparagus with pristine hunks of avocado, bitter greens, and crispy lotus root ($14). Grilled scallops ($16) skewered like plump pincushions with buttery mentaiko (spicy cod roe) melted beautifully at the suggestion of a fork. Robata-grilled veggies were uninspired, but the same couldn’t be said of the koji chicken ($28) with ginger soy and Japanese pickles, flame-shellacked yet still tender from its marinade. So was the slow-burning spicy beef tenderloin ($41) in a sesame-studded sauce of its own juices.

Not every dish landed—particularly those pandering to the local market. A whole pound-and-a-half  Boston lobster ($69), split and slathered with shiso-ponzu butter, was somehow still meager on the meat and overly generous on the butter (which my dining mate did drink from the shell, being thorough). Meanwhile, minced local lobster with Siberian caviar ($36), a Boston exclusive, was overly seasoned with browned butter and salt, and layered into two tiny squid-ink miso buns that lay flat and dry like crackers. 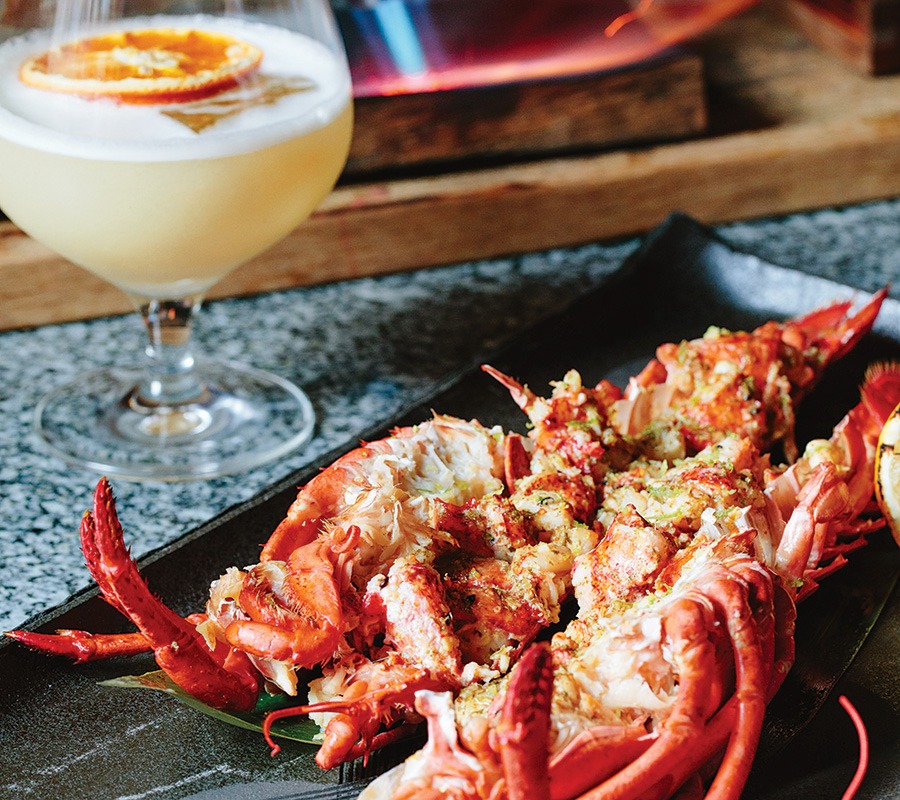 As for the dessert menu? It’s a parade of dated-but-mostly-good hits alongside some head-turning presentations. Zuma’s dessert deluxe platter for two ($20 each), an extravagant staple since its earliest days, was a colossal stunner: seasonal cakes, ice creams, dragon fruit, dates, and melon served over a big basin of ice. For lighter appetites, excellent house-made sorbets and ice creams ($5) were served scooped and tempered atop a single craggy glacier. The milk-chocolate tejina ($13), on the other hand, was a straight-outta-2010 crémeux mold of the Buddha’s head stuffed with mango and lime sorbet. The flavor was bland and forgettable, and eating the religious icon’s face with a spoon was, well, kind of unsettling.

One otherwise feels entirely at ease at Zuma, now home to some of the city’s finest hospitality. Servers coursed dishes out with the demeanor of affable 007 agents and exhibited furtive, nonchalant attentiveness. No cloth napkin was left un-triangulated upon my return from the restroom; spilled glassware was whisked away with quick, kind craft; and every plate was offered with an unrushed explanation, despite a busy dining room. When my companion expressed curiosity about the superlative sake menu, the sommelier offered an off-the-cuff history lesson and presented a bamboo box cradling her favorite, an unfiltered beauty called Rihaku Dreamy Clouds ($30).

Indeed, the drinks deserve as deep a dive as the food—and the bar, buzzing with subdued energy, offers similarly stellar service. “Sorry about the mess I’ve made,” said the bartender as I took a seat one evening; I failed to locate the supposedly spilled drop. Anyway, I was soon distracted by the shaken “Shojo Spritzer” ($12), a froth-topped glass of summer refreshment with strawberry-basil-infused Aperol, followed by the bright and balanced “Yamatochi Cooler” ($14), a seafoam-hued tequila tincture invoking mint, ginger, elderflower, and lychee. Nonalcoholic cocktails ($6) were also alluring, ripe with fresh fruit and herb accents.

Such comprehensive attentiveness never goes out of style—and that’s a good thing for Zuma. The cushy Back Bay oasis may have felt cutting-edge a decade ago, but today this form of glitz is almost quaint—old-fashioned in the way of a 2005 Aston Martin or a latter-season episode of Sex and the City. It’s also timelessly appealing when done well. You’ll pay quite a price, but you’ll have quite an evening.