Just 12 of the treats are available each night, alongside house-made gelato flavors and a new, Broadway patio. 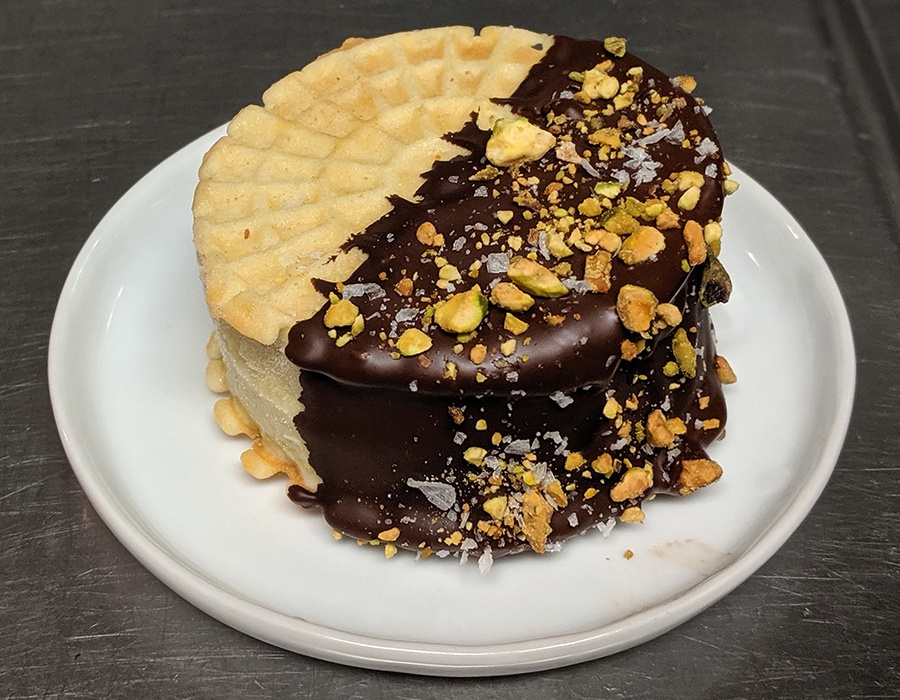 Pastry chef Angela Peterson joined the Fox & the Knife team about a month and a half ago, following an exciting season that earned Akunowicz’s enoteca places on both Food & Wine and Eater national’s Best New Restaurants lists, among other honors. An alum of Catalyst and Harvest, Peterson is now making rotating flavors of gelati, sorbetti, and more at Fox & the Knife. Her ice cream program launched this week with vanilla gelato—which is great as an affogato, Akunowicz says—and a bright plum sorbetto.

Akunowicz began craving the non-traditional cookie composition this time last year, as she was lounging on a beach in Sicily and noshing on pistachio gelato in brioche. “I wanted to evoke that feeling,” the chef says. Peterson’s sandwich cookies are half-dipped in dark chocolate, and sprinkled with chopped, roasted pistachios and Maldon sea salt.

Like the other breads on Fox & the Knife’s menu—such as the chef’s taleggio cheese-stuff focaccia, and tigelle hand-pressed with an iron Akunowicz brought back from Italy a decade ago—pizzelle are distinct. Peterson presses the cookies one-by-one—hence the limited availability.

And what better way to savor them than while leisurely people-watching on Broadway? A few two-top tables and nine street-facing counter seats are part of the new, maple-and-metal patio, designed by Jess Haley of RODE Architects, and built for Fox & the Knife by Boston-based firm Black Birch Creative. Opening this Saturday, Sept. 6, the 15-seat outdoor area will be saved for walk-ins only. It will be open into the fall, weather-permitting, the same hours the enoteca is, beginning at 4 p.m. daily.

Don’t worry, too, if you miss out on the limited-availability pizzelle ice cream sandwiches this week: The treat is a permanent menu addition. Happy hour, indeed.