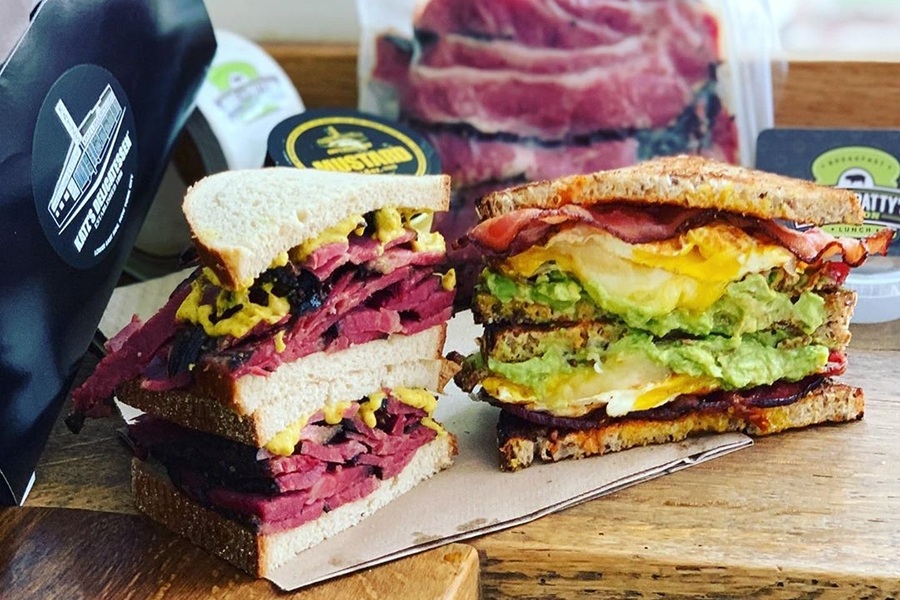 Katz’s pastrami and Mike & Patty’s “the Fancy” are available via Uber Eats in Boston this weekend only. / Photo courtesy of Mike & Patty’s

Since Katz’s Delicatessen was founded in 1888, its iconic pastrami hasn’t changed. The beef is still cured and spice-rubbed in-house, in the East Village; then smoked slowly over a secret blend of wood chips, and hand-carved. But where Katz’s serves its sandwiches has changed: Now, fans can have Katz’s shipped across the country—and New Yorkers can even order it on Uber Eats. To celebrate the latest modernization, the 130-year-old company is taking its pastrami on tour, including a stop this coming weekend in Boston.

Katz’s Deli is teaming up with Mike & Patty’s to bring its make-at-home pastrami sandwich kit to Bostonians’ doorsteps, along with a hot and fresh “the Fancy”—two eggs, bacon, cheddar, avocado, red onions, and house mayo—from the Boston-area sandwich makers. The kit includes a pile of hand-carved pastrami, rye bread, and a jar of Katz’s mustard. The $21 deal is available via the Uber Eats app in Boston from September 6 through 8.

Beyond this weekend, locals won’t be able to order “what she’s having” from Uber Eats, to quote Katz’s most famous Hollywood cameo. And according to a Katz’s representative today, the brand “has no plans on expanding its storefront locations,” despite some exciting rumors along those lines a few years ago. But the company does ship pastrami, corned beef, frankfurters, sliced turkey, and more throughout the U.S. and Canada. Like previous collaborations with chef Jamie Bissonnette at Little Donkey and Barbara Lynch’s the Butcher Shop, this latest “cross-country tour serves as a taste of what those in Boston can recreate at home through Katz’s shipping service,” the Katz’s rep says.

And it’s a dream opportunity for the Mike & Patty’s team. “This is an ideal partnership for us because we aspire to be for breakfast sandwiches what Katz is for traditional Jewish deli sandwiches,” says partner Mike Gurevich. “The taste of the meat we sampled for the Katz’s build-your-own kit was unreal and we are psyched to serve it up together with our fan-favorite The Fancy!”