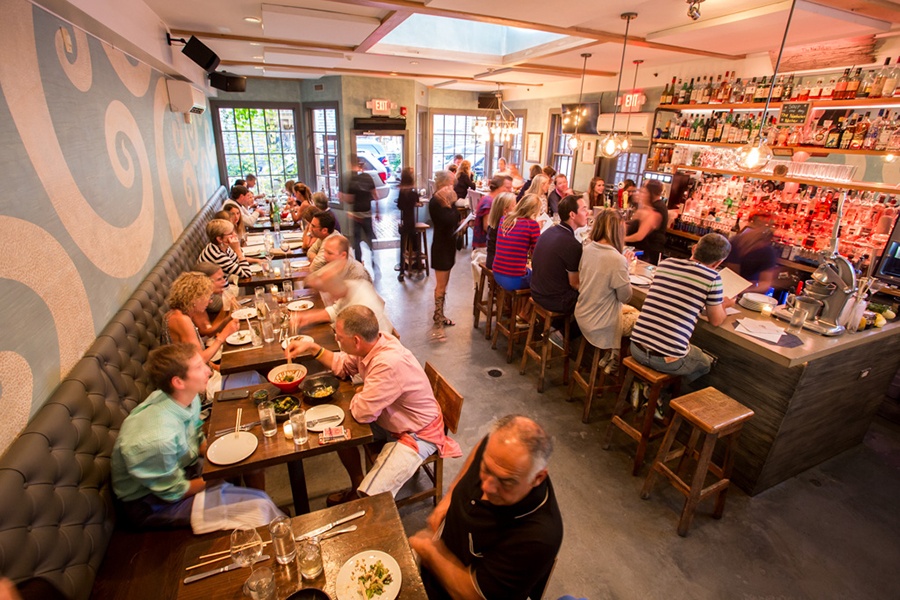 The Nautilus is a hotspot on Nantucket, and the team will open a much larger location in Boston. / Photo courtesy of Tishman Speyer

Next summer, Bostonians might not have to board a ferry to get a taste of one of Nantucket’s best restaurants. The Nautilus, which serves up vibrant small plates with a coastal bent on the tiny Massachusetts island, is opening a larger, second location in the Boston Seaport in spring 2020. Called the Nautilus Pier 4, the waterfront outpost will offer a similarly stellar wine and cocktail list and seasonal menu favorites as the Nantucket original.

Terry’s craft cocktails set a new bar on the Nantucket drinks scene; and the Nautilus wine list has earned Wine Spectator acclaim. In 2019, Terry and Mackey teamed up with other partners to open the Gaslight, a live music venue and restaurant in downtown Nantucket.

The Nautilus will be the latest Nantucket-born venture to expand into the Seaport, following a seasonal beer garden by Cisco Brewery and latitudinal bistro Lola 42. The Nautilus owners are psyched about the opportunity.

“The sense of place, the waterfront location, the legacy as a culinary destination and the future potential of the area make Pier 4 a perfect place to expand our Nantucket restaurant,” Bowler said in a press release. “The buzz in the area is palpable and we hope to amplify it by bringing to Boston’s waterfront everything that makes our island restaurant special—the atmosphere, the service, the cocktail program, the wine list and, most importantly, the food that people have been lining up for on Nantucket for over five years.”

The Nautilus Pier 4 is headed for the newly finished, nine-story condo building on the site of the late, famed seafood restaurant Anthony’s Pier 4. The new, nearly 5,000-square foot restaurant will be next door to Woods Hill at Pier 4, a spinoff of farm-to-table restauranteur Kristin Canty’s Concord flagship. The site is also home to new locations of Gre.Co and Tatte Bakery.

The Pier 4 development is adjacent to the Institute of Contemporary Art, and it boasts one acre of green space with water on three sides, plus Harbor Walk access. “Our goal was to deliver a design, outdoor space and curated retail that connects residents and visitors to the waterfront,” said David Wilkinson, a senior director of development firm Tishman Speyer, in today’s announcement. “Attracting acclaimed restaurateurs of a renowned establishment like The Nautilus affirms that we have created something special here at Pier 4, and we can’t wait for them to open their doors.”

The Nautilus at Pier 4 is on track to open during the second quarter of next year. Woods Hill, meanwhile, will open by the end of this year, a Tishman Speyer representative says today.

Stay tuned for more details about the Boston outpost of the Nautilus.