It's the first East Coast location of the Mexican chain, which sends an equally questionably named merch truck to town this week. 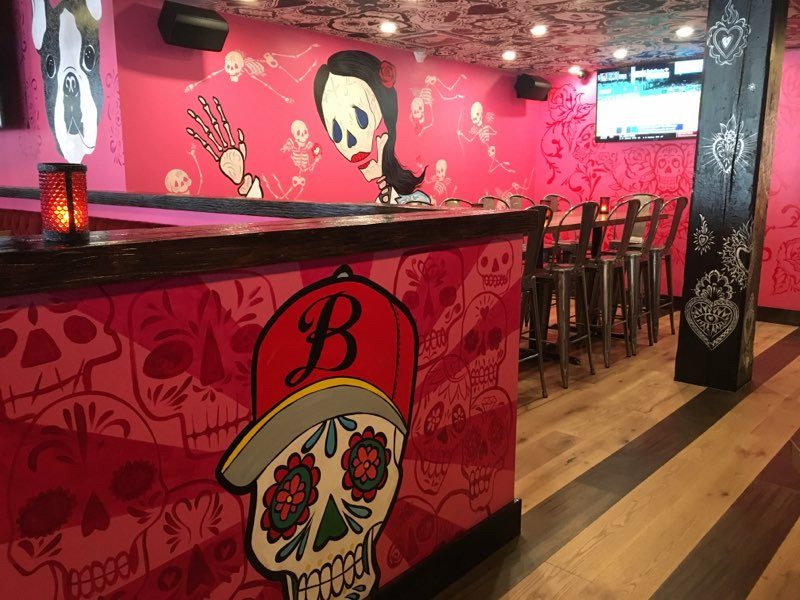 A chain-Mexican restaurant called [deep breath] Pink Taco [SIGH] is about to open in Fort Point, the East Coast debut of the Las Vegas-born biz. But wait, there’s more: This week, before the first tortilla is even served, Pink Taco will deploy a neighborhood-roving merch truck—nicknamed, perhaps problematically, “Gypsy”—to introduce Bostonians to its brand.

There’s a lot to unpack here. First, know that the brand is a calavera-painted, tequila-spiked interpretation of a Mexican restaurant. (Also, sidenote: Is that Rihanna rocking a sombrero and skull earrings in one of the pieces on the walls of the new Boston shop? A Pink Taco rep swears it’s not. This stan remains suspicious.) 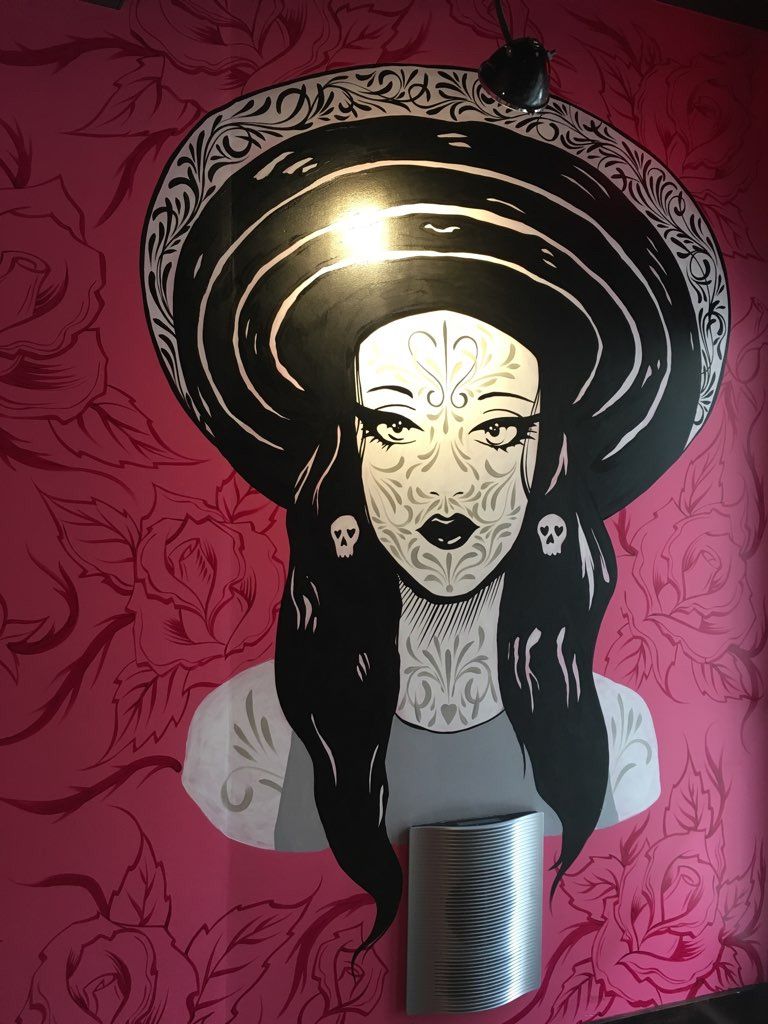 This art in the Boston restaurant is not meant to evoke Rihanna, a Pink Taco rep says. / Photos courtesy of Pink Taco 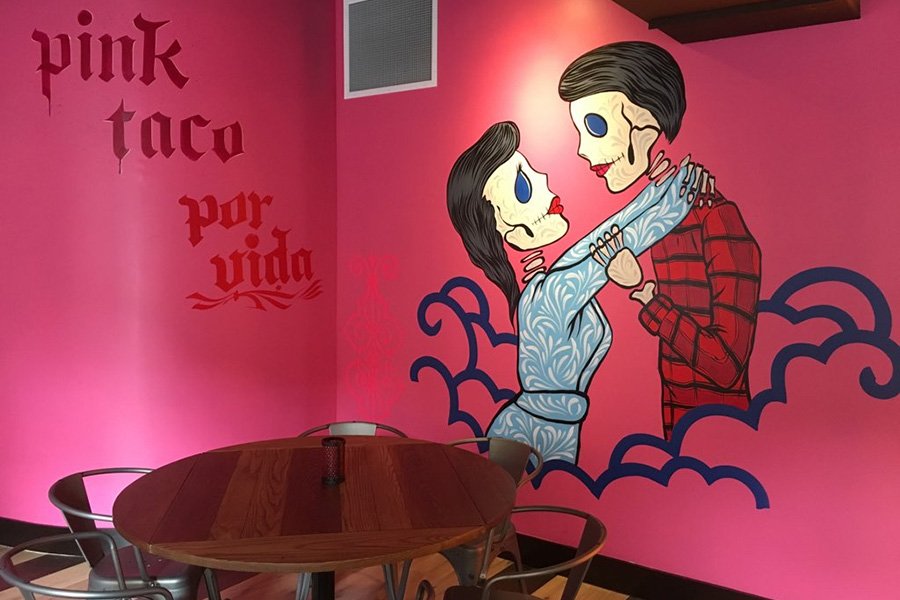 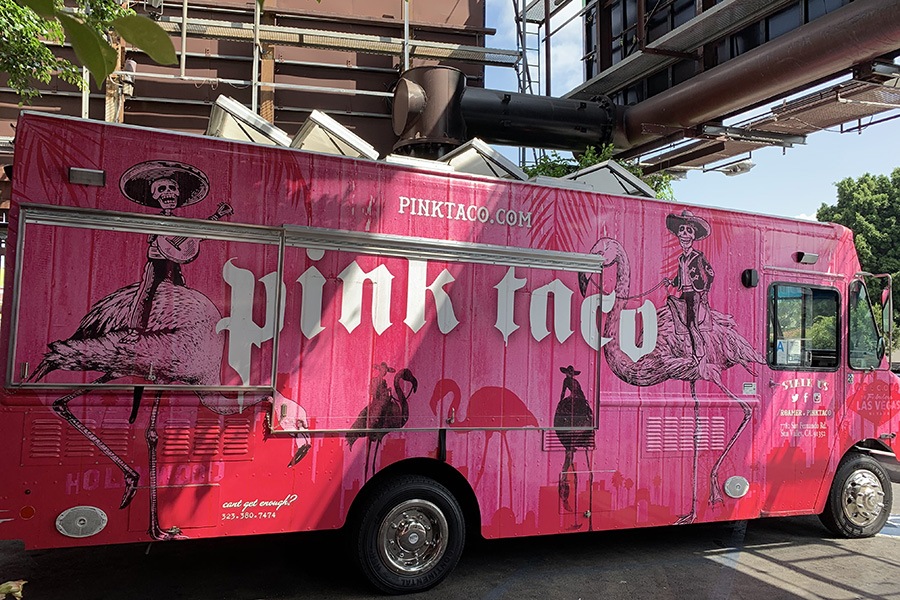 The Las Vegas Hard Rock Casino-born, Los Angeles-based company will open its Boston outpost at 374 Congress St. on Monday, October 7. But on Friday, Sept. 27 and Saturday, Sept. 28, a hot-pink truck—emblazoned with those same calavera-style skeletons, now riding pink flamingoes—will be roaming around Seaport Boulevard, Congress, and Summer streets. The truck won’t be selling or serving food, confirms a Pink Taco rep, but it will be handing out merchandise to “get the buzz out” about the Seaport area’s newest place that serves margaritas.

Then again, there’s a good chance you’ve heard of Pink Taco already. Founded in 1999, Pink Taco has enjoyed some notoriety over the years, after a Scottsdale, Arizona location closed a decade ago following backlash over the name, which is derogatory slang for “vagina” (and also, sure, describes a tortilla-wrapped menu item covered in magenta pickled onions).

Morton allowed in 2012 that, in retrospect, he regretted naming it “Pink Taco.” It was “a funny joke at the time,” but it “isn’t even provocative anymore, it’s almost cliché.” Morton is no longer involved in the brand, a rep says today.

Okay. But while we’re on the subject of questionable nomenclature, let’s talk about that truck. A Pink Taco rep says that its name, “Gypsy,” refers to how “the truck roams around from place to place.” That it does: The Gypsy truck has traveled from Los Angeles to Las Vegas, and now Boston; it will later zoom into Miami ahead of a future opening there. But when Boston magazine has reported on other “gypsy”-branded mobile outfits, a few readers have rightly pointed out that the descriptor is also a derogatory slur for Romani women. Per its website, other Pink Taco food trucks based in LA and Chicago are nicknamed “LA Woman” and “Brandy.”

The Pink Taco brand itself is certainly on the move: In 2017, the company was acquired by a private equity firm, which put it on track for a national expansion. It has eyed Boston from day one, with sights set on “dense, urban areas with convention, business, retail and tourist traffic.”

The 185-seat bar and restaurant will have a full liquor license; the company purchased one on the second-hand market after 1940s-era Jamaica Plain dive bar the Drinking Fountain closed in 2017. Pink Taco plans to be open for lunch, dinner, and weekend brunch, and it will debut an outdoor patio next year.