A new weekly Asian menu and more fall fun are ways to "enjoy the time we have" with the East Boston restaurant. 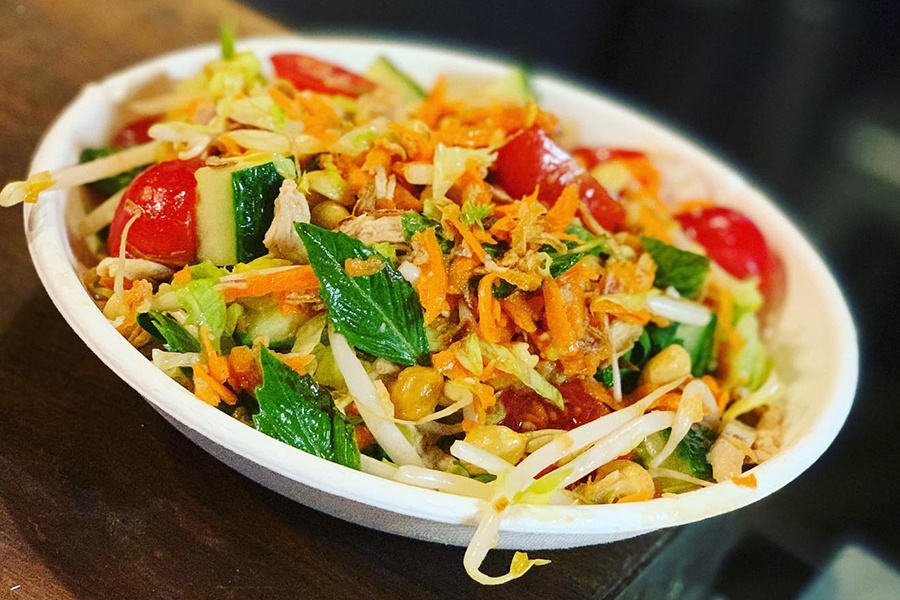 Vietnamese chicken salad from a pop-up Asian food menu available at KO Pies every Wednesday for the rest of the year. / Photo courtesy of KO Pies

The East Boston Shipyard is where to go for any and all Australian meat pie cravings: KO Pies is still going strong—and even expanding its repertoire. Nearly a year since Sam Jackson announced his intention to sell the business, the chef-owner has yet to receive the right offer, he says, so he’s planning at least another several months of food and fun. That includes a lineup of special events, such as an in-house pop-up series of Asian-inspired dishes on Wednesday nights.

Alongside the regular lineup of pies and more, Wednesdays at the Shipyard will now feature the likes of house-made cilantro noodles, a Vietnamese-style chicken salad, and nasi goreng (fried rice) inspired by memories of Kaki Lima, an East Boston-founded Indonesian pop-up which had a residency at KO Pies. The Wednesday series will highlight “fresh, crisp, really vibrant flavors—I crave food like that,” Jackson says, noting a relative dearth of Asian cuisine in Eastie and Winthrop, especially since Kaki Lima chef Retno Pratiwi and her husband, Peter Gelling, moved away earlier this year.

Jackson, a native of Wollongong, Australia, says he has always found inspiration in Asian cuisines. He is consulting menus from his days as a cook in Sydney to rotate in new dishes on the special menu every couple of weeks.

It’s a big change of plans since last October. After 10 years in Boston, Jackson was beginning to think about his next adventure and announced that KO Pies is for sale. But this past January, while Jackson was on holiday in Taiwan, he contracted what turned out to be scrub typhus, a rare bacterial fever. Jackson recovered with the help of the Massachusetts General Hospital Infectious Diseases Division, and he has been in touch with doctors there all year to monitor his continued health.

“The illness itself wasn’t a big part [of the decision to stick around Boston for awhile longer], but it certainly made me appreciate what I’ve got,” Jackson says. “The big thing now is trying to enjoy the time we have here.”

The restaurant is still on the market—if anyone reading this is interested in buying. But Jackson is also in talks with his longtime East Boston landlord, and he hopes to extend KO Pies’ lease into 2020 if no suitable offers come through. (UPDATE, December 12: Jackson has signed a lease for 2020. See you on Australia Day!)

Announcing the intent to sell was Jackson’s way of being “transparent with customers and the public,” he says. He acknowledges that “it was disruptive to the staff,” but now that the KO crew is carrying on for at least a while, hosting fun new events is “a way to keep me and the staff, and for that matter, the local customer base, motivated.”

Besides the Asian menu, which is available every Wednesday through December from noon-8:30 p.m., stay tuned for more parties, many of which will take advantage of KO’s enclosed patio. First up: Bivalves, Beats and Brews this Sunday, Oct. 13, with Oyster Common shellfish suppliers, special beers from Narragansett Beer and Notch Brewing, and DJs spinning hip hop.

“We still have a good couple months of decent outdoor weather,” says Jackson, who is on the record as a hater of Boston winters. “You just have to wear a hoodie.”