Notch Will Open a Second Brewery, Taproom, and Beer Garden in Brighton

It's part of the historic Charles River Speedway headquarters, set to open as a marketplace and events space in 2020. 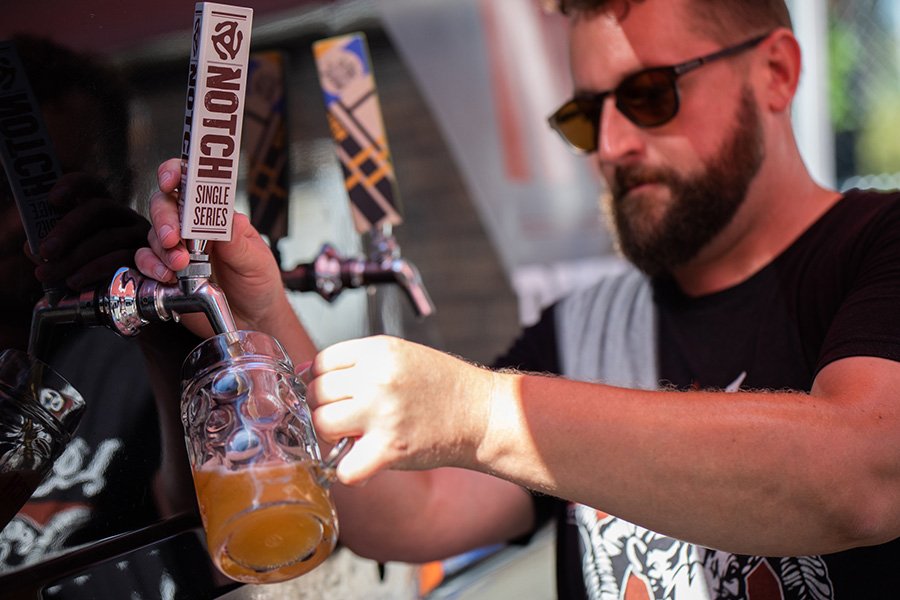 A historic site in Brighton will soon be another place to sip session beers courtesy of Notch Brewing. / Photo by Drew Katz

Hidden in plain sight along the fast-changing Western Avenue corridor of Brighton is a portal to Bavaria—or maybe Bohemia. A second Notch brewery, taproom, and Charles River parklands-adjacent biergarten is coming to Brighton in 2020, as part of a historic revitalization effort of the Charles River Speedway headquarters. Notch will anchor the 17,000-square foot site at 525 Western Ave., which will also be home to new, small-scale shops and food purveyors, a full-scale restaurant, non-profit and creative office space, and an events space.

Notch answered the call from the Architectural Heritage Foundation, which is working with the state Department of Conservation and Recreation’s Historic Curatorship Program to reimagine former office buildings and horse stables that once served the long-gone Charles River Speedway racetrack. “I get emails every week about new taproom and brewery opportunities in the Boston area,” says Notch founder and brewmaster Chris Lohring. “This one came across, and I thought it was pretty unique in terms of location and property. I went down a look at it, and I stood in what will be our beer garden, and I really felt like I could be in Bavaria or Bohemia.”

That’s important to Lohring, who founded the European-inspired session beer company Notch as a contract-brewed brand in 2010 before establishing its original brewery location in Salem in 2016. The first U.S. brewery to focus exclusively on session beers (4.5 percent alcohol-by-volume or less), Notch is unique among New England breweries, and it has also cultivated a truly original vibe at its high-ceilinged, brick taproom and river-side biergarten in Salem. Lohring’s team was ready to expand closer to Boston, he says, but only to a location that could be a setting for Notch’s “singular point of view.”

“When people come to experience Salem and what we’ve built here, it’s not like other taprooms. We have German and Czech [styles of] beer, but also that continental service model and vibe. That lasts with people,” Lohring says.

At the Speedway, Notch will have a similarly sized taproom as it has in Salem, with distinctive architectural details. The place likely won’t offer skeeball, which is a focal point in Salem; the game is an homage to the arcade at Salem Willows Park, a staple of growing up in the North Shore city, says Salem native Lohring. Having skeeball at the original Notch taproom “reflects that we’re part of the community,” Lohring says. “In Brighton, I don’t want to be just another taproom with games. Whatever [entertainment] we select there, it will be reflective of the community.”

The new, outdoor beer garden is almost double the size of the original location’s. The Brighton brewery will have its own, seven-barrel brewing system, which will produce some beers unique to the Speedway, as well as core styles like Notch Pils, a signature crisp, herbal, Czech-style pale lager; and Dog & Pony Show New England pale ale. Notch will continue to brew on its 10-barrel system in Salem, as well as produce its flagship cans—Notch Pils and Left of the Dial IPA—at Two Roads Brewing Company in Connecticut, where the company has supplemented production since 2013.

Notch will not have its own kitchen in Brighton, but Lohring is excited to partner with local businesses and future Speedway neighbors to provide food at the taproom. The real estate development and urban design firm Graffito SP is currently working to enlist other tenants at the Speedway. Construction is expected to start at the Speedway this month, with a summer 2020 opening planned for Notch.

“AHF is thrilled to rehabilitate the historic Charles River Speedway buildings into a revitalized destination to enjoy local fare, drink, craft, and community,” AHF president Sean McDonnell said in a press release. “Without the commitment of our legislators [Massachusetts State Rep. Michael Moran and Boston City Councilor Mark Ciommo] and the support of [the Brighton] community, the Speedway would not have been possible.”

Follow along with the progress at @charlesriverspeedway on Instagram, and with Notch and Lohring as well. Before the Brighton location opens next year, get a taste of the very Bavarian vibe Notch creates at its Salem taproom, open every day; or track down one of its final Mobile Biergarten events of the season. Meanwhile, Brighton is poised to get its first brewery this month, as Brato Brewhouse + Kitchen is finally opening this weekend. 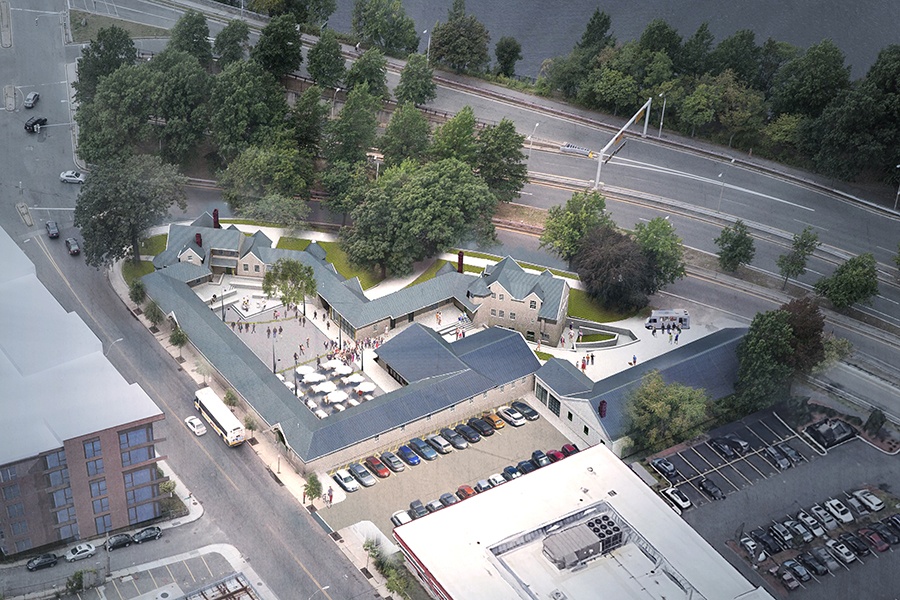 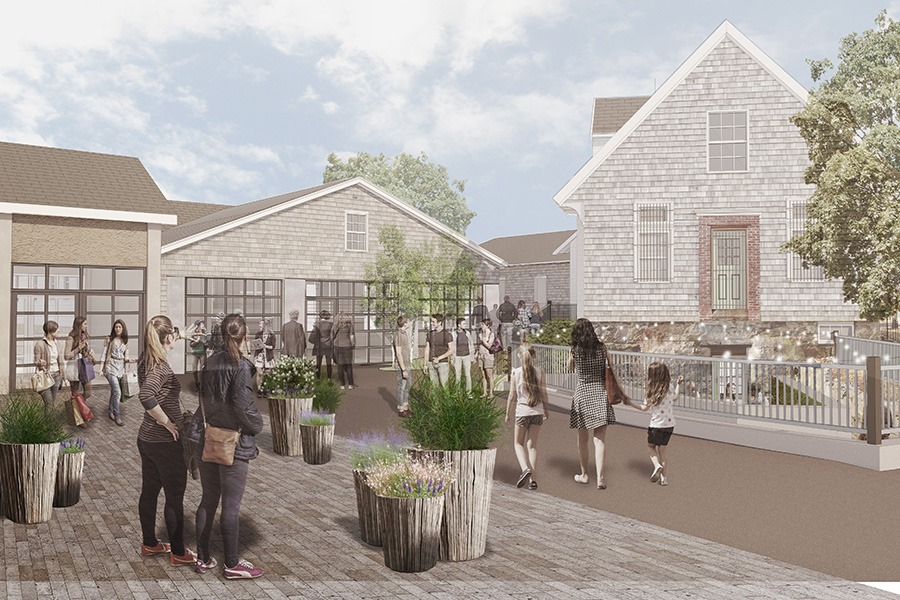 A rendering of the lower courtyard of the revitalized Speedway. / Bruner/Cott Architects 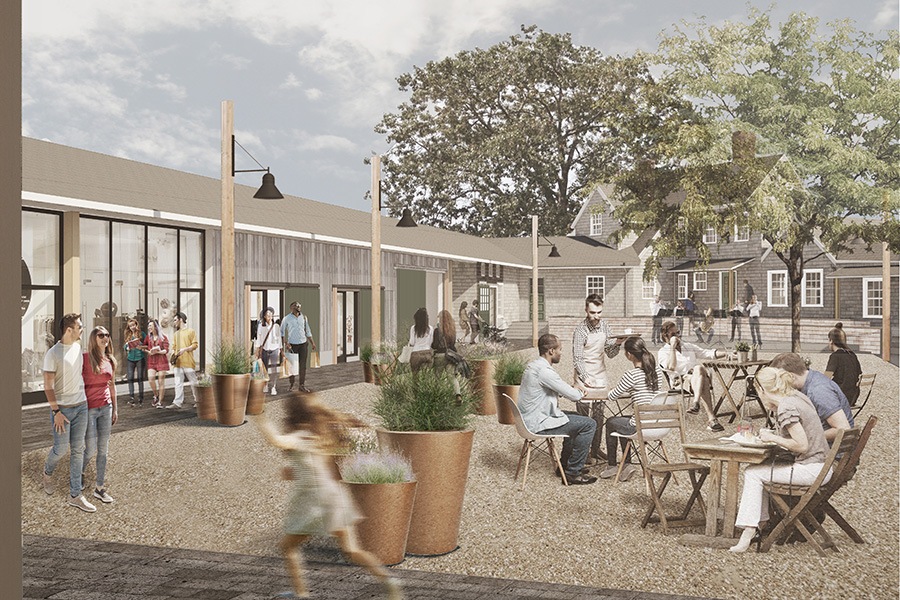 A rendering of the lower courtyard of the revitalized Speedway, from the vantage point of the future Notch brewery taproom. / Bruner/Cott Architects