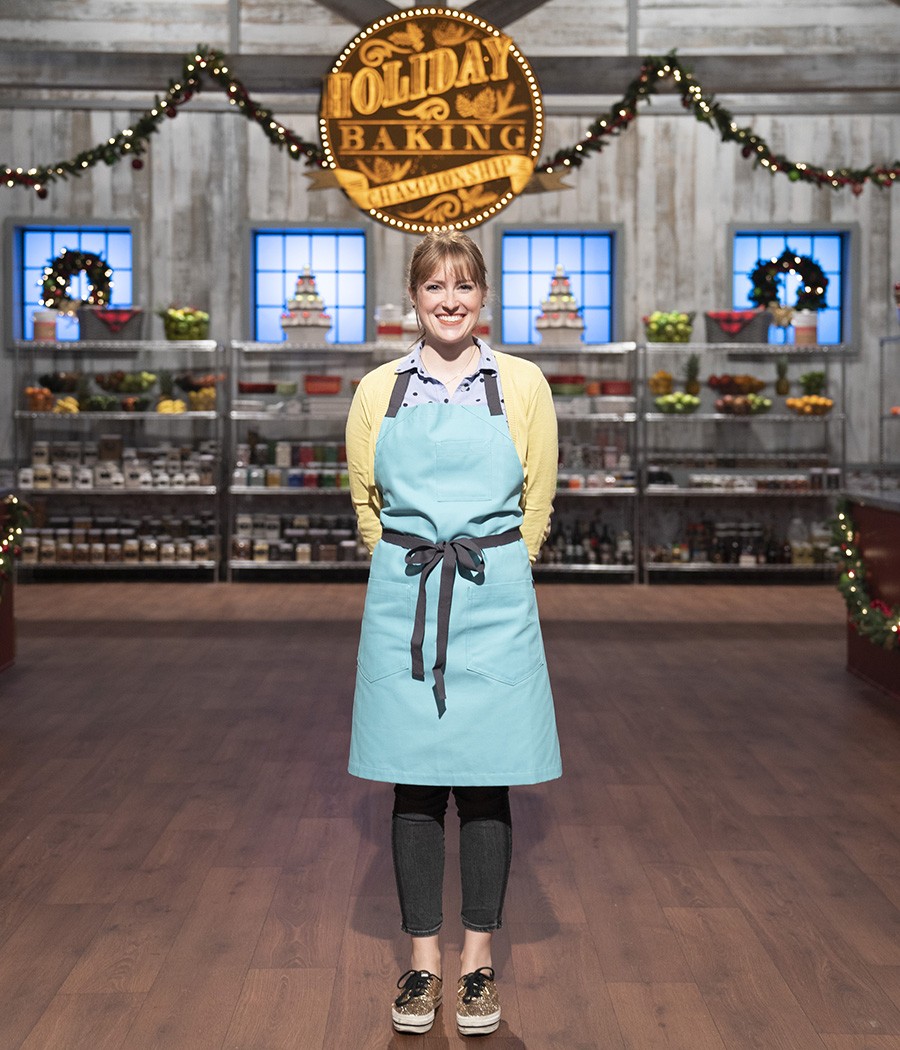 As much as Magnolia Bakery general manager Sarah Wallace loves a good monster cupcake, the pro cake decorator is glad Halloween is over because she’s been ready for Christmas for months. Wallace is one of 10 bakers competing on this season’s Holiday Baking Championship, which premieres Monday, Nov. 4, on the Food Network.

“I just love Christmas and the holidays so much, so with a little holiday music we all got right in the spirit,” Wallace recalls about filming the tournament earlier this year. “I just haven’t been able to get rid of Christmas since then, so I’m very ready.”

Along with home baker Kobe Doan, Wallace is one of two Bostonians competing on the sixth season of the seasonal Food Network tournament. Locals have fared well in the past two seasons of the show: Josh Livsey, Harvest restaurant’s executive pastry chef, was a Holiday Baking Championship finalist in 2017, and Bay Stater Douglas Phillips made it to the finals last year—and then won.

Wallace is a Rochester, N.Y., native whose culinary career began at Magnolia Bakery’s Rockefeller Center location after she graduated from the Culinary Institute of America. She moved to Boston five years ago, and after a couple pastry management roles, including on the training team that opened Flour Bakery + Café location numbers four, five, and six (“Joanne Chang is a wonderful human being,” she says), Wallace rejoined the Magnolia Bakery company in 2017 to launch their first Boston location. If you’ve seen payroll manager ADP’s latest advertising campaign, you’ve likely seen the baker in action.

Holiday Baking Championship is her first TV competition, though, and the experience—which includes a $25,000 for the winner—felt like finding one of Willy Wonka’s Golden Tickets, she says. We caught up with Wallace ahead of the season 6 debut to talk pumpkin spice, Christmas cookies—and to get her holiday party planning tips.

You’re a pastry chef by education. So, have you always wanted to be a baker?

I loved baking when I was in high school. To put it politely, nobody in my family cooks or bakes anything. So I got really into watching the Food Network. I love Paula Deen. I love her warm gooey butter cake. It made me want to do pastry, it is so good. And, you know, Ina Garten, the Barefoot Contessa; Sandra Lee, with all her little tablescapes. I loved it. I used to watch all of them and I would write down how they did it. And then I would beg my mom to take me to the grocery store to get all the ingredients and I would cook dinner, or I would bake stuff for friends in high school. I think it was my senior year when my best friend’s mom got remarried and asked me to make her wedding cake. I was like, “Oh my god, I can’t make a wedding cake, I’m just high school. That’s the big leagues!” And she said, “No, Sarah, I trust you. You can do it.” I must have watched 1,000 YouTube videos on rolling fondant and making buttercream roses and stuff, but I made a wedding cake, and I’ve just loved it ever since.

You said no one else really cooks, so what are your family’s holiday food traditions?

We can put it a meal together for sure, but we’d have cereal for dinner; that was my favorite. We’d order a lot of pizza, takeout. We had ice cream for dinner a lot. Now, we always have to fly to Florida for Christmas because my parents live there now. It’s always my responsibility to bring like, 9,000 cookies in my suitcase so we all have desserts.

I am all about the Christmas cut-out cookies. I love to outdo myself every year with a more detailed shape, like snow globes and stuff. Last year I did this cute little flannel shirt that was so cute. I think everything should be as beautiful as possible and taste good. It has to be equal parts beautiful and equal parts delicious.

How do you feel about pumpkin spice? Is there anything on that level for a wintertime flavor?

I am the girl that gets the pumpkin spice oatmeal, the pumpkin spice pasta sauce from Trader Joe’s, the pumpkin spice everything. I prefer Dunkin’ pumpkin to the Starbucks pumpkin latte, but it doesn’t matter—if there’s pumpkin in it, I’m gonna eat it. Anything cinnamon, nutmeg, and clove, the little trinity of fall spices, for sure. I think eggnog things, gingerbread things, those flavors immediately trigger every holiday memory throughout your whole life. Oh god. Yes. I make an eggnog fudge that is so good.

Is eggnog fudge something that you could ever serve at Magnolia?

We have a set menu with set flavors. All of our recipe testing happens at our big commissary kitchen in New York, but we do have a new ideas policy. If you have an idea it goes through our chief baking officer, and then if they love it, and they recipe-test it, and they figure out a way to roll it out, it can go on the menu company-wide, which is exciting. I have more decorating freedom, though which is really fun for me.

In the baking world—not necessarily at Magnolia—is there anything you’re over at this point? Like, are there too many doughnuts?

I love doughnuts. I was never really the modern plated, gelatin-based, molded dessert kind of girl. I was always like, “Let’s put some sprinkles on it and add more butter.” That’s more my style. I do think it’s absolutely incredible what you can do with gelatin and little silicone bowls, but.

Do you have any holiday party hosting tips?

I like to pick six recipes that I really like. Some fudge, some little like snack bar thing, some pretty cookies with different colors and textures. I’ll make all six of them, and I’ll divide them up and make up little platters to bring to each party so there’s a little bit of everything for everyone. Also, my mom always likes to do a pretty decorative table for Christmas dinner. One year, I wrote everybody’s names on a cookie, so it’s a little name tag for the table, but then they also got to eat it. That’s a fun gift for somebody if they’re having a party.

Great tips, thanks! We’ll be watching for you on the show, but is there anyone else that you think we should keep an eye on?

Kobe [Doan] is also from Boston, I love him. And then, Jen [Jennifer Clifford] is from New Hampshire. It was funny, we were the New Englanders talking about the weather. But everybody was absolutely incredible. It was so much fun to have a group of like-minded people that all love baking and decorating, but all with different varying levels of like experience. It’s going be very fun to watch.