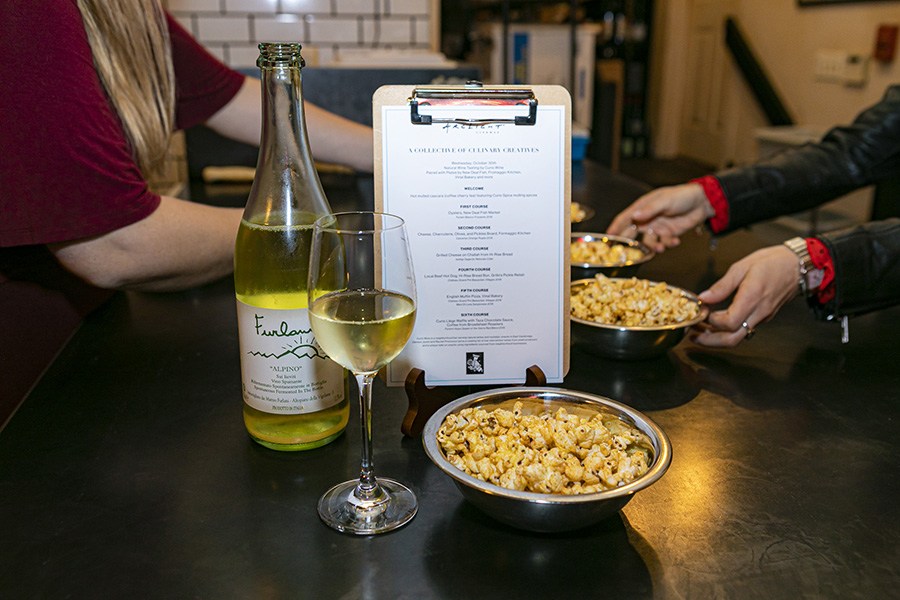 It’s a given these days that any new movie theater will be stacked with amenities like plush seating, reserve-ahead tickets, and craft beverages to entice viewers to leave the comfort of their own couches. ArcLight Cinemas, officially opening November 26 at the Hub on Causeway development, will have all of that—plus some unique local flavor to start things off: Sofra, Mamaleh’s, and other area restaurants are offering limited-edition popcorn spices for the opening menu at ArcLight Cinemas Café Bar.

The in-house bar and lounge boasts 65 seats on the main level of the soon-to-open cinemas. It’s a standard enhancement for the Los Angeles-born theater company, which is known for all-reserved seating, commercial-free screenings (besides select trailers), and exclusive programming like Q&A events and limited-release showings. Along with a full bar boasting house-made syrups, New England craft spirits, and other hallmarks of a Serious Cocktail Program, ArcLight Cinemas Café Bar will have a selection of local craft beers and organic wines, too.

Then there’s the snacks, which go well beyond bags of Swedish Fish and Starburst. The menu includes salted lavender cashews, market veggies and sumac-scented hummus, and a crispy potato “tornado” (skewered potato spiral) with garlic malt aioli, as well as larger plates like Neapolitan ​pork and beef meatballs with marinara and garlic bread, and a Croque Monsieur panini​ ​served with a light side salad.

And ArcLight has even tapped some noteworthy locals to spice up its popcorn. The opening menu includes popcorn spiced with za’atar, courtesy of pastry chef Maura Kilpatrick’s unparalleled ​Sofra Bakery​; pickled salt spice from ​Mamaleh’s Delicatessen​; chocolate pie spice from Somerville chocolatier Gâté Comme des Filles​; and smoky Cajun spice from Cambridge blender ​Curio Spice​ Co. In addition to being on the cinema concessions menus, for the week of December 2 fans can sample the special flavors at ArcLight-branded popcorn carts, located at the new entrance to the TD Garden.

ArcLight hopes to continue collaborating with Boston-area chefs and restaurants to change up the special offerings over time, according to a cinema rep. This isn’t the first time Boston names have upped the movie-popcorn game: When ShowPlace Icon opened in the Seaport in 2018, it served up a year of chef-created blockbusters.

Now that the Bruins and Celtics are back on Causeway, the area’s new development is increasingly active, too. Erykah Badu hits the stage this week at Big Night Live, the brand-new music venue that’s also home to Boston’s very own Guy Fieri’s Tequila Cocina. A huge new Star Market is now serving the neighborhood, and Banners Kitchen & Tap is open with a huge selection of sports bar-adjacent fare and experiences. Hub Hall is bringing a ton of quick-service options in the form of a new food hall this winter; and Eater Boston just reported that renowned New York City cocktail consultants Proprietors LLC (Death & Co.) are expanding into Boston with a new concept called Sound Advice.

ArcLight is set to debut during the week of Thanksgiving—plenty of time for you to catch this holiday season’s hottest releases. When it opens, the café bar will be accessible to the ticketless public as well as moviegoers daily from 11 a.m.-11 p.m.

This post was updated November 26 about the opening of ArcLight Cinemas, and with plans for a popcorn pop-up at the new TD Garden entrance during the week of December 2.