The fast-casual restaurant titan opens up about the challenges of building—and selling—a $7.5 billion company, his goal of putting a Tatte Bakery on nearly every city block, and his midnight dreams about gluten. 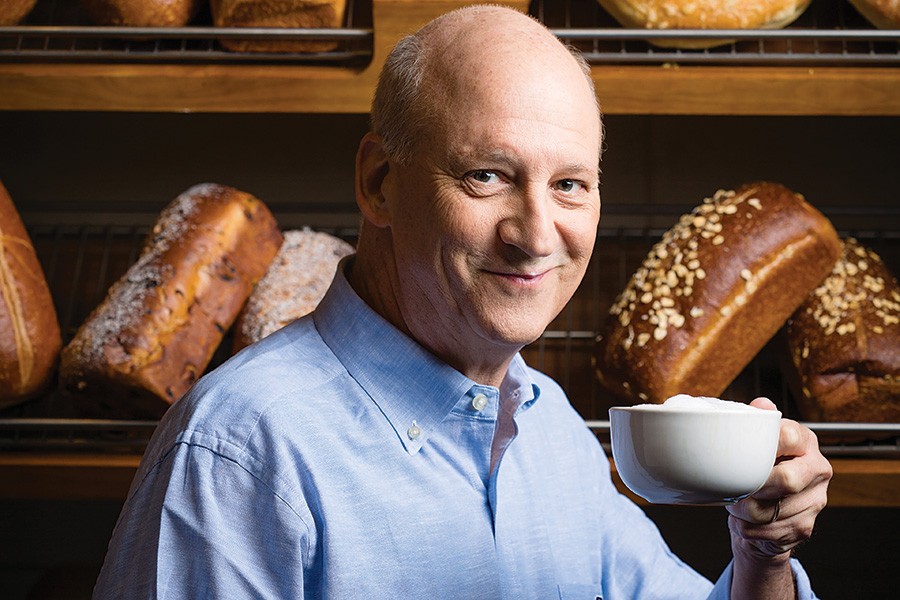 Having sold Panera Bread for billions, avuncular food industry giant Ron Shaich (pronounced “shake”) is continuing to conquer appetites and transform our cityscape with his investment or ownership in such exploding brands as Tatte Bakery & Café, Clover, Life Alive, and Cava. His objective: upsetting the applecart of our apathetic dining habits by providing high-quality, soul-satisfying alternatives to fast food, in settings that feel more like Parisian patisseries than elementary school cafeterias. Living in Brookline, within whistling distance of many of his newest restaurants, he can often be found happily chatting up his customers. With more Tattes opening their doors this fall, we sat down with Shaich to talk business.

The first thing I need to know is, how do you create a brand that sells for $7.5 billion?

I can answer that question in three words: Build competitive advantage.

Great! But what exactly does that mean?

You build something that some people want enough that they’re willing to walk past all your competitors to reach. It’s very tough to play as a generalist today, so you have to differentiate yourself. And you need to figure out today what’s going to matter tomorrow. The world doesn’t pay any of us to do what everybody else is doing. It pays us to figure out where the world is headed and to be there when everyone arrives.

How did that work with Panera?

It was very clear to me that about one in three fast-food consumers didn’t feel respected. They wanted real food in an environment that engaged them. They wanted to interact with people who cared. And they were willing to pay more for respect and foods that elevated them, not diminished them. Fast food had become a diminishing experience. That paradigm became “fast-casual.”

And Panera entered the arena and took no prisoners.

Well, it was the best-performing restaurant stock of the past 20 years. It outdid Starbucks. It beat Chipotle. And over those 20 years, returns were in excess of 25 percent, which beat Warren Buffett and Berkshire Hathaway. But just as important is the fact that we touched the lives of 10 million people a week. That’s roughly one out of every 30 Americans.

It’s remarkable how, at a time when everybody was saying gluten was bad for you, you were able to create what is essentially a behemoth bread company. Did you ever second-guess yourself?

Let me tell you a funny story. Howard Schultz, the owner of Starbucks, and I are like frenemies. Competitors. We met in our twenties, so I’ve known him for 30, 40 years. I went to bed one night and woke up at 4 a.m. after having a dream. The dream was that somebody had determined that it was actually coffee that wasn’t good for you, and it was bread that was. At the height of the Atkins diet, there were investors saying, “You’ve got to take bread out of your name.” And I thought to myself, They don’t understand. They were reacting to a passing fad.

So if the public’s fear of gluten wasn’t the reason you sold Panera, what was?

I was profoundly worried. What I saw is that increasingly, our public capital markets have become short term. Our society has become short term. The average shareholder 50 years ago held for eight years. It’s now eight months. It’s rooted in hedge funds. It’s rooted in the amount of money managed by index funds. It’s rooted in the way money managers are rewarded. But it’s a fact, and it’s putting increasing short-term pressure on our public-company boards and CEOs. The manifestation of it is the theory that the only role of a public company’s CEO is driving up the share price in the short term—to hell with employees and the communities you operate in. I wanted to invest in wonderful entrepreneurs like Tzurit Or of Tatte, or with Cava, or Life Alive. I wanted to be able to help them think long term, and to do things the right way, to focus on what matters.

Tell me more about your new brands. What do they all have in common?

We own Tatte, Life Alive, Cava, and Zoës Kitchen. We have a chunk of Clover. Basically, we’re investing in a range of businesses that are rooted in wellness. Maybe only 4 percent of America is essentially vegetarian, but 40 percent are eating “plant-forward.” We think they have powerful trade winds that will fuel them into the future. With Cava, we’re looking at what it means to be the nation’s authority on the Mediterranean way of eating. We’re the largest Mediterranean chain in America, with 325 restaurants. With Life Alive, it’s organic and almost entirely vegan. But you don’t see us saying that we’re vegan anywhere in the restaurant. That’s not what we’re selling. What we’re selling is a sense that when you come there, it’s like a spa for your insides. You don’t achieve success by looking at what your competitors are doing and saying, “That’s the flavor of the month. This month, I’ll do kale salads!” You figure out what’s going to be sustaining and why. None of that is fad-oriented or focused on what happens to be hot this week.

Is your strategy always to disrupt the paradigm?

No. I’ve always wanted to discover today what’s going to matter tomorrow. Let’s make sure it’s in place. It may turn out to be disruptive, but my goal is simply to deliver something that matters to the customer.

When it comes to your restaurants, how important are the appearance and the ambiance?

I don’t separate them from everything else. We’re not in the food business. We’re in the experience business. The environment matters a great deal.

How important is the name?

It’s minimal. Panera was originally called St. Louis Bread Company. As we started growing it, it was pretty clear what that meant to people: Clydesdale horses and beer. So we had to come up with a new name. We tested a whole bunch of them, but the name was simply an empty vessel to put our soul and personality into.

Do you see a mascot on any of our brands? I think mascots are about kids.

Is advertising crucially important, or secondary?

Name a food trend you think hasn’t peaked yet and might be the next big thing.

I’m always looking for the deeper trends. I’m trying to separate the wheat from the chaff, a signal from the noise. Increasingly, people understand more about nutrition and that how you eat matters. And it’s relatively inconvenient to eat well, because it’s infinitely easier to eat a lot of processed stuff. Anybody who can offer food that’s good and good for you, with convenience, is going to be at the forefront of a powerful trend.

It depends on my mood. I married into a large Italian family. My wife’s in Italy right now celebrating her birthday. So we eat a lot of Italian, because it’s light and grilled. It’s spices and bold flavors.

You’re very rich. What would you say is your biggest extravagance?

On a personal level?

You can interpret it any way you like. Something that your success has allowed you to do that you think is a little bit self-indulgent.

Probably the ability to create an entity like Act III Holdings. I’ve essentially taken $300 million of my own money, and I’m able to invest in companies or partner with people.

Sounds like all business and no fun. What do you do for yourself?

I have a house on an island called Jumby Bay, right off Antigua. I love it. It’s gorgeous. I built the house just the way I wanted it: low-to-the-ground, and it sits on the Caribbean. I spend a couple of weeks a year there. And I do my best thinking. I just sit there and think, Okay, where do I want to be with my life…other than in the Caribbean? [Chuckles.] Where am I headed, in terms of my health, my relationships, my wife, my family? Where do I want to be in terms of what I’m doing with my time, or with my spirituality? And I literally try to figure that out. Then I write out how I’m going to get there, and I look at it every quarter.

What’s your favorite restaurant in Boston?

You mean other than Tatte, Life Alive, or Cava? I love all of them. It sounds like self-promotion, but I really mean it. I was in Tatte this morning for breakfast. That’s my place to go and have a meeting, and I may very well be in Life Alive for lunch. I also have an investment with Garrett Harker, who runs Island Creek Oyster Bar and Row 34. There’s a bunch of these restaurants I’m in just because I love the people involved.

Who is the businessperson you admire the most, and why?

I admire the people who are willing to make a bet based on their judgment and be right. The most celebrated would be someone like Steve Jobs. But I admire that in all sectors of life, whether it’s teachers who are betting on young people, a journalist betting on a story. I have profound respect for that; those people get me excited. I see that in the visionaries we invest in, but also in the way people bring up their kids or manage their relationships, or make the right decisions relative to their health. I respect people who are eating right and exercising.

Do you always do that? Or do you have a fast-food guilty pleasure?

I try to eat well. I’m very conscious of it. I hired a vegan chef seven years ago, and she’s now the current director of Life Alive. So my body is a temple, but at times, my intestines can still be a sewer. I drove my son back to college two weeks ago, and we were on a road trip for about two and a half days. We were at Wendy’s. We were in Dairy Queen. Bob Evans. I actually visited three different Popeye’s trying to get their new chicken sandwich. We eventually found it. So yeah, I love food and I don’t always love food that’s good for me.

Are you a good cook?

I barely cook. But I’m a good eater.