Attention, anyone who’s been blasting holiday music since Halloween, anyone who can’t get enough foil-wrapped chocolate gelt, and especially those folks who never want to take off their ugly sweaters: There’s a holiday-themed pop-up bar in Boston for you. From celebrating Friendsgiving with actual props from Friends, to Sippin’ Santa at Shore Leave, to the return of Boston’s first Hanukkah pop-up, Maccabee Bar, here’s where to make spirits bright this season.

Listed in chronological order of their opening dates. Also, note that these pop-up bars are weather-permitting, like everything in Boston during the winter. Make sure to call ahead or check social media if the weather is inclement. 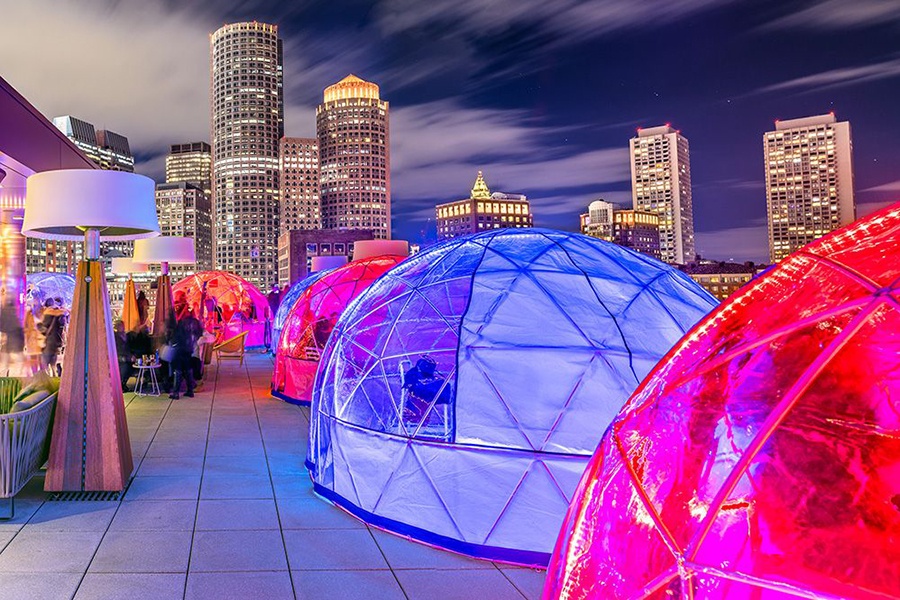 The glowing “igloos” atop the Seaport’s Envoy Hotel are back for a fourth season of  cocktails and skyline views—with some welcome upgrades: For the first time, there is a menu of small bites available for guests on the seven-story roof deck. Created by two-time Chopped Champion and the hotel’s executive chef Tatiana Rosana, it features favorites like duck confit poutine and cinnamon-sugar churros to pair with large-format libations and more to drink. Alongside five, 10-person igloos, there’s also a brand-new, 1,800-square foot enclosure up there this year, which adds heated space for an additional 160 people to hang out in an indoor/outdoor environment. The igloos are illuminated with colorful LED lights, and warm blankets and comfy seating inside makes for a lovely winter escape. Groups of 10 can reserve the igloos via OpenTabe for a $500 beverage sales minimum; they’re otherwise open Tuesday-Saturday nights for walk-ins. The rooftop enclosure is open Tuesday-Saturday nights for walk-ins.

It’s time for “The One with the Pop-Up:” Friends, one of the most beloved TV shows of the ’90s, is bringing an immersive experience to Boston in honor of the series’ 25th anniversary. Setting up in the Fenway just in time for Friendsgiving, the nostalgia-packed, reservations-required pop-up will feature a retail store, plus original props from the show for optimal selfie setup. It will also be home to full-service, re-created Central Perk. The fictional café comes to life with an iconic orange couch, as well as exclusive bites for purchase, made in partnership with locals Union Square Donuts and Finesse Pastries. The snacks include Phoebe’s Great-Great Grandma’s Famous Cookies, Ross’s Blueberry Bribe Muffin, Joey Likes Jam! doughnuts, and more. “The One with the Pop-Up” will be open for reservations every day but Christmas from 9:30 a.m.-10 p.m., with a few exceptions: It’s closing at 5 p.m. on Thanksgiving and Christmas Eve, and it will be open ’til 1 a.m. on New Year’s Eve. It will also host a special Friendsgiving event on Thanksgiving Day. Tickets are required for entry into the Friends experience. 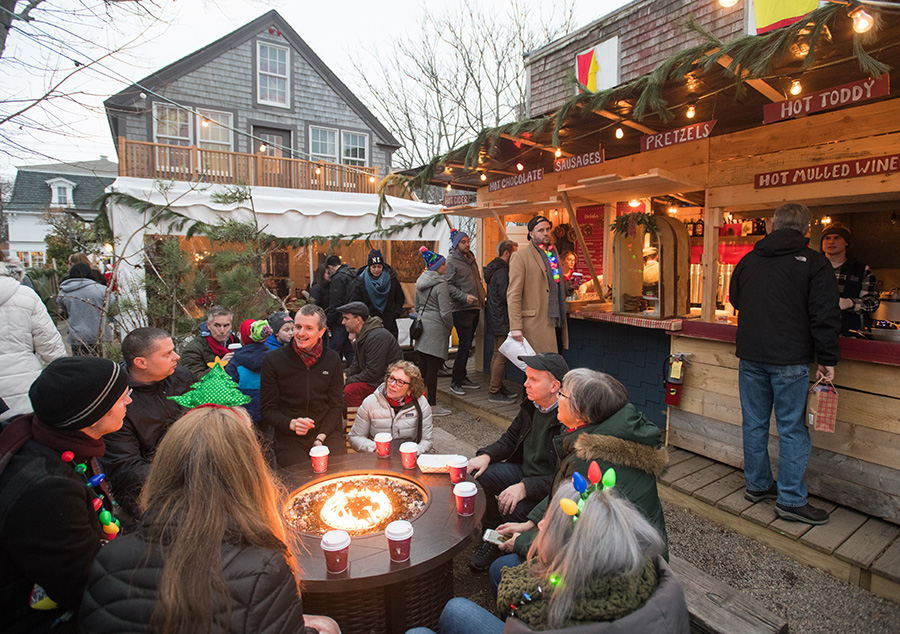 Photo courtesy of the Canteen

In downtown Provincetown, the beachy backyard of the Canteen restaurant is one of the hottest spots during summer on Cape Cod. But in the off-season, it might be even more magical, as it transforms into a chalet-inspired winter wonderland every weekend. Inside, the restaurant is serving up classics like schnitzel, pierogi, grilled sausages, Swedish meatballs, and more, accompanied by hot mulled wine and cider, hot chocolate, winter ales, and other festive beverages. The outdoor area welcomes 25 vendors selling handmade wares and street food—including soul-warming raclette—to a European-style marketplace under twinkling lights, with its own full-service bar, fire pit, and snug blankets. The Canteen holiday market is open Saturdays and Sundays through December, weather-permitting. 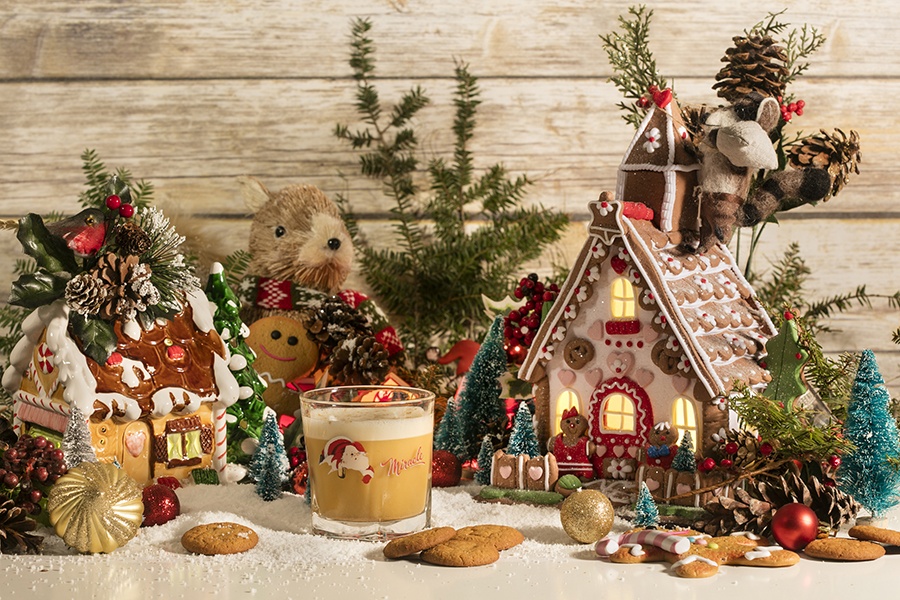 Three Massachusetts spots are all aglow with the festive phenomenon known as the Miracle Pop-Up, which brings Christmas cheer and themed drinks to bars around the world. This year, a rep from the Kimpton Marlowe shares that the hotel lobby will don decor to become a modern-day Santa’s Workshop, complete with toys, train sets, and a crackling fire emanating from an elevated, marble fireplace. Take it all in while sipping on themed cocktails like SanTaRex, a dino-shaped tumbler of rye whiskey, oloroso sherry, spiced apple cider syrup, hard cider, lemon, and baked apple bitters; and the Christmas Carol Barrel, an iced hot chocolate full of blanco tequila, coffee liqueur, cocoa nib-infused orange-Cognac liqueur, and Mexican spices. The drinks are standard across all Miracle locations—and the fun glassware is for sale—and each spot will host an ugly Christmas sweater party on December 2 this year. Each location operates unique hours, and plans its own food specials, too. 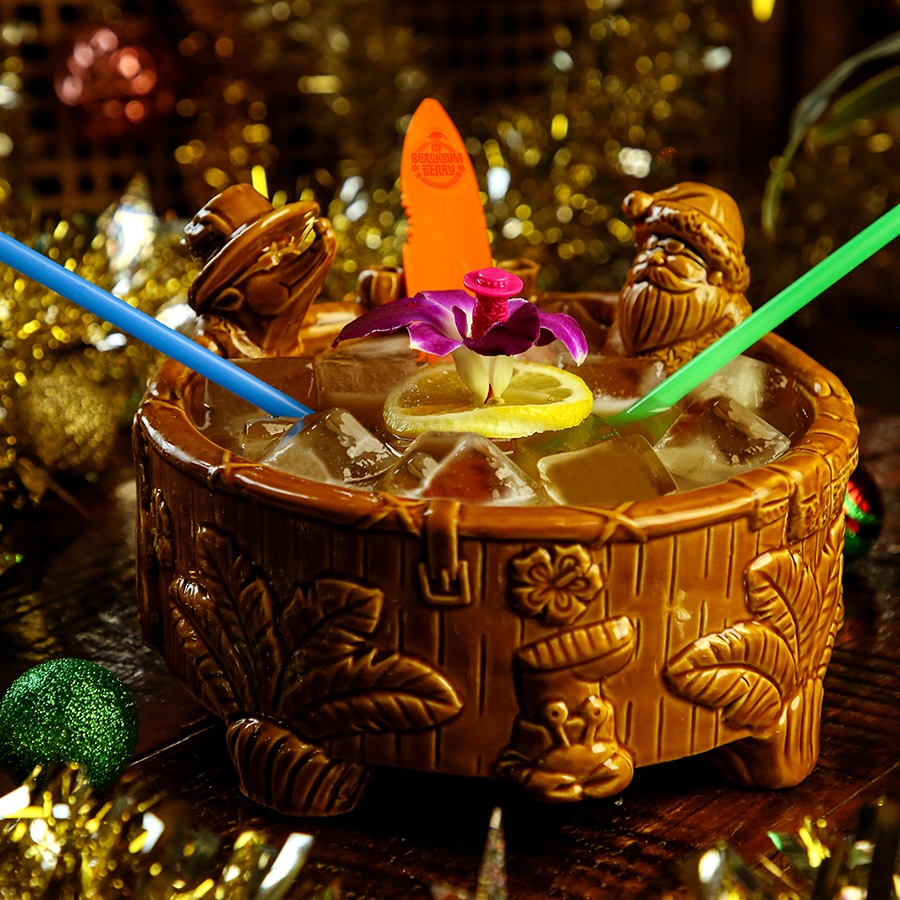 A tropical version of Miracle Bar is taking over 23 tiki bars around the country this season—and one of them is the South End’s very own Shore Leave. Vintage and nostalgic decorations will transform the rum dungeon into a celebratory paradise, where you can enjoy the menu of themed drinks created by tiki bar expert Jeff “Beachbum” Berry. Among this year’s signature sips are shots, large-format libations to share, and hot drinks, each served in a custom glass that is available for purchase. Get ready for cocktails like the Kris Kringle Colada; the Jingle Bowl, full of rums, Applejack, Averna, bitters, citrus and pineapple juices with maple and cinnamon syrup; and the Festivus Flip. Sippin’ Santa at Shore Leave accepts reservations, and it’s also part of Miracle Bar’s quest to host “the biggest ugly sweater party on the planet” on December 2. 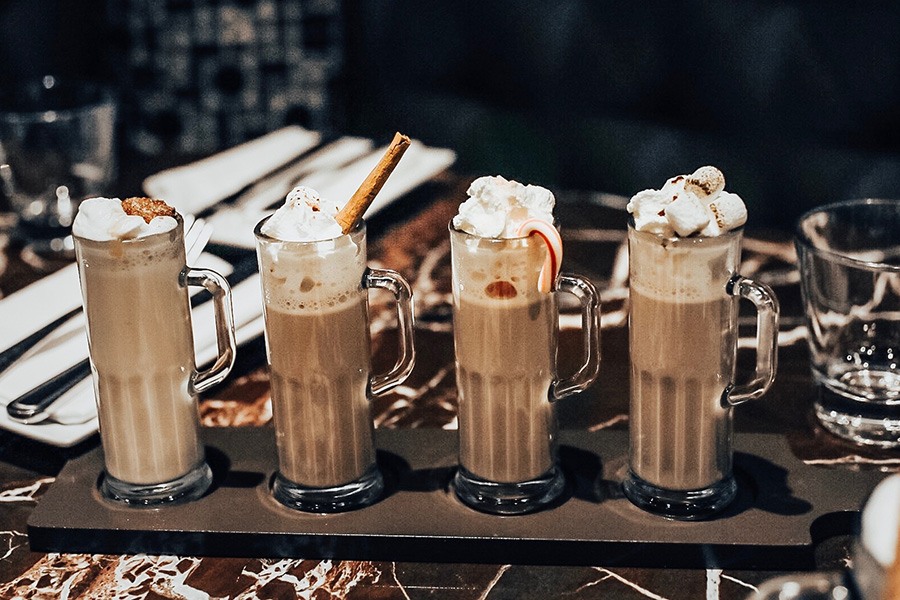 Since 2013, MET Back Bay restauranteur Kathy Sidell has brightened spirits from Black Friday until Valentine’s Day with adorably decadent flights of cocoa. Less a pop-up per se than a fun and festive menu addendum, the experience includes four petite mugs, bursting with seasonal flavors, with or without booze (or, “the big one” of your choice for $10). This year, the flight ($14) features a marshmallow and whipped cream-topped regular hot chocolate; a nutmeg-spiced and toasted coconut-flaked version; Pumpkin Dulce, with salted caramel and a churro; and peppermint hot chocolate. 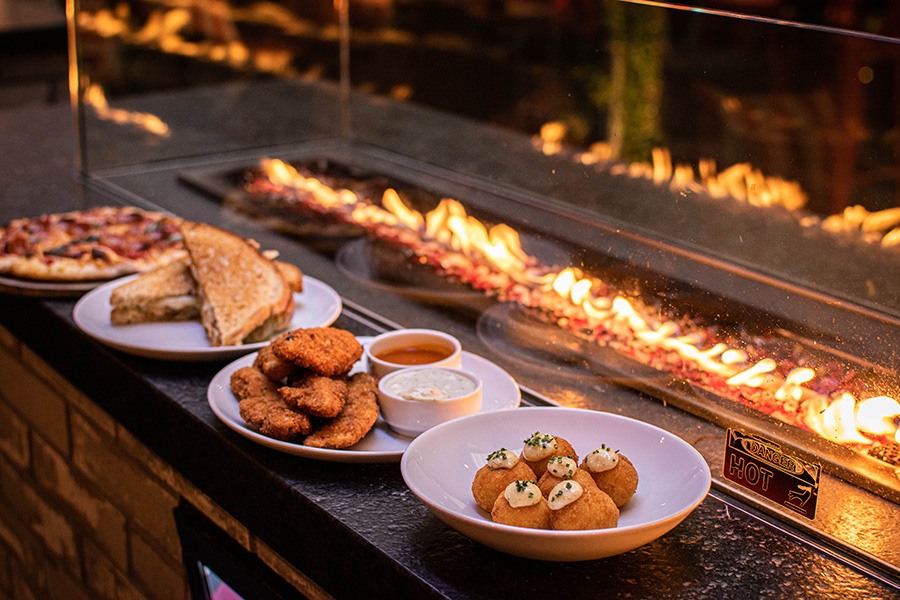 The Lodge at Publico

Back for its third winter, the Lodge at Publico brings après-ski vibes to South Boston. The retractable roof over the restaurant’s year-round garden-atrium is closed, and the fire pits are roaring every weekend through the winter. The cozy vibes are amplified by pine greenery, blue and white throw blankets and fuzzy pillows, and the wintery backdrop of a vintage ski lift chair. Along with all the Patriots games on the projector, the Lodge will host various holiday events, including a Toys for Tots party with Kiss 108’s Heidi Marani, and a holiday wreath-making class. It all pairs with a lodge-inspired snack menu, and themed drinks—including a shot-ski, featuring Keel Vodka shots served in miniature plastic ski boot-glasses, which clip right into the ski. Needless to say, Instagrammable moments abound. The Lodge at Publico is open Friday evenings from 5 p.m. until close, and weekends from 2 p.m. until close. 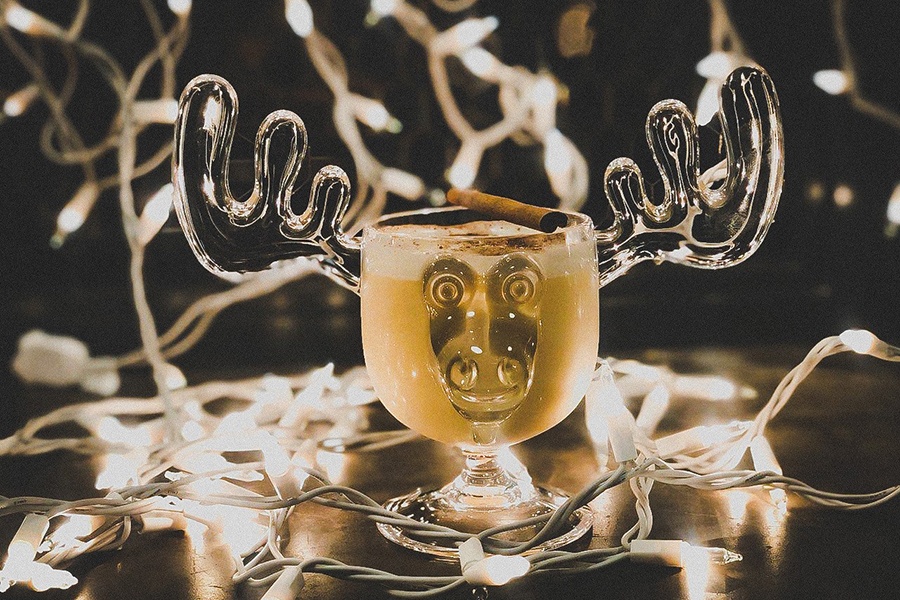 Classic holiday movies inspire the latest season of Precinct Kitchen + Bar’s annual wintertime experience, the #PrecinctPopup. Head to the Back Bay in December to sip on drinks like How the Grinch Stole Christmas, with green chartreuse and Absolut Vanilla, smoked with cinnamon, clove, anise and wood chips; and the World’s Best Cup of Coffee, which is a shot of Boston Common Coffee espresso spiked with with Absolut Vanilla, Kahlua, and amaro. Chef Oliver Senoussaoui is also dishing out Elf-inspired specials, like Buddy’s Spaghetti & Meatballs, along with a host of other festive appetizers, entrees, and desserts pulled from the worlds of A Christmas Story, It’s A Wonderful Life, Die Hard, and more. Get ready for the place to be decked out with Instagrammable moments also inspired by holiday movie magic. 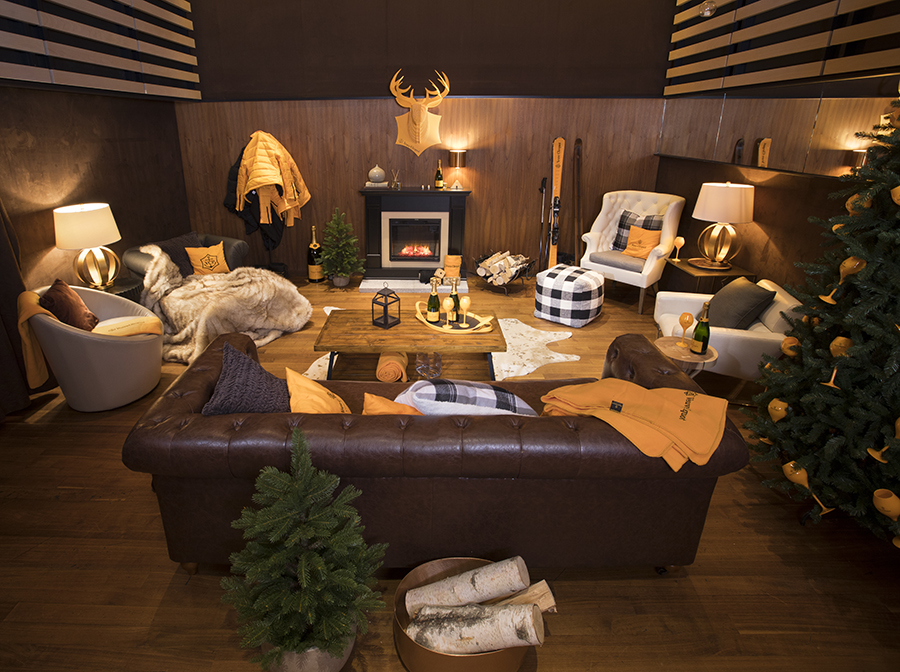 Ski on over to the W Boston hotel, where the Gallery restaurant transforms into a Champagne-fueled après ski lounge—complete with a ski lift photo booth—beginning December 10. The winter-long pop-up features the elite wines of Veuve Clicquot—a glass of the Yellow Label Brut or Rosé on a weekday, or a bottle on the weekends, is a non-hotel guest’s “lift ticket” for entry. The Veuve Clicquot Ski Chalet at the Gallery also has a list of Veuve Clicquot’s vintages, alongside a menu of truffle arancini, duck confit cannoli, Champagne chocolate mousse with orange caviar, and more gourmet bites by executive chef Elyssa DuBois. Resident DJs add to the vibe, which is at once chic and cozy with a Veuve Clicquot Christmas tree, a fireplace, and plush pillows and blankets in signature yellow. Open until early March, downtown Boston’s mountain resort experience is also accepting private party bookings. 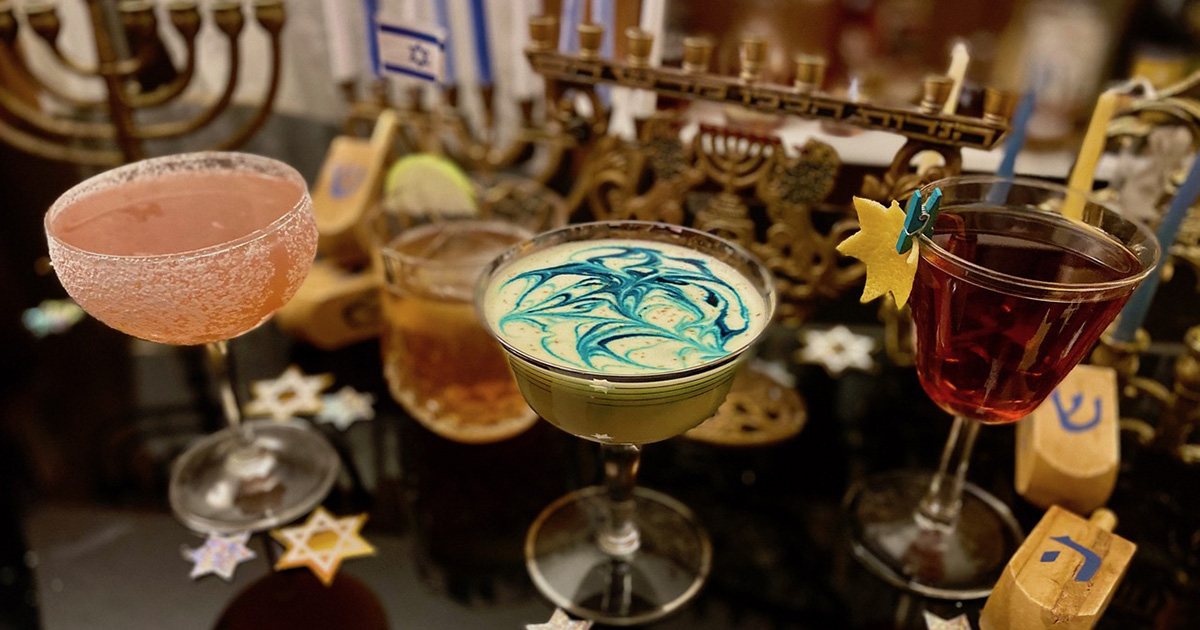 ’Tis the season not only for Christmas cookies and Santa stans, but also for the festival lights—and thanks to Best of Boston bartender Naomi Levy, Hanukkah has its own fun and festive pop-up for the second year in a row. Taking over Somerville speakeasy Backbar this year, Maccabee Bar returns for two weeks in December with shimmering decor, and creative libations inspired by Jewish traditions. “I designed this to be for everybody, whether you celebrate Hanukkah or not,” Levy says. “Maccabee Bar is a really fun addition to the holiday season, but to me it’s also a really important addition for a community that’s pretty underserved this time of year—and their friends, and anyone who wants to see a different side of the season.” Some of the drinks Levy created for last year’s debut will return, such as the sufganiyot-inspired Hebrew Hammer, featuring vodka, “leavened” sugar, lemon, and raspberry. But she’s also developed some new treats, like Have a Ball, whose soul-warming flavors of cognac, cinnamon, and crème frâiche are inspired by noodle kugel. There will be small bites to complement the drinks, and Levy herself will join the Backbar team making drinks each Monday of the pop-up (December 16 and 23). Maccabee Bar, like Backbar, will be open on a first-come, first-served basis, nightly from 4 p.m.-12:30 a.m., except for Christmas Eve and Christmas Day. On Christmas Eve, you’ll find Levy serving up select Maccabee Bar cocktails—plus homemade eggnog, and food specials like jelly doughnuts and Christmas cookies—at Variety Bar, attached to the Comedy Studio at Bow Market. At 7 p.m., catch a special all-Jewish lineup featuring Emmy-award winner Josh Gondelman and friends.