Tavern of Tales Opens with Board Games, Snacks, and Soundscapes

The immersive board-gaming café brings a unique experience to Boston in December. 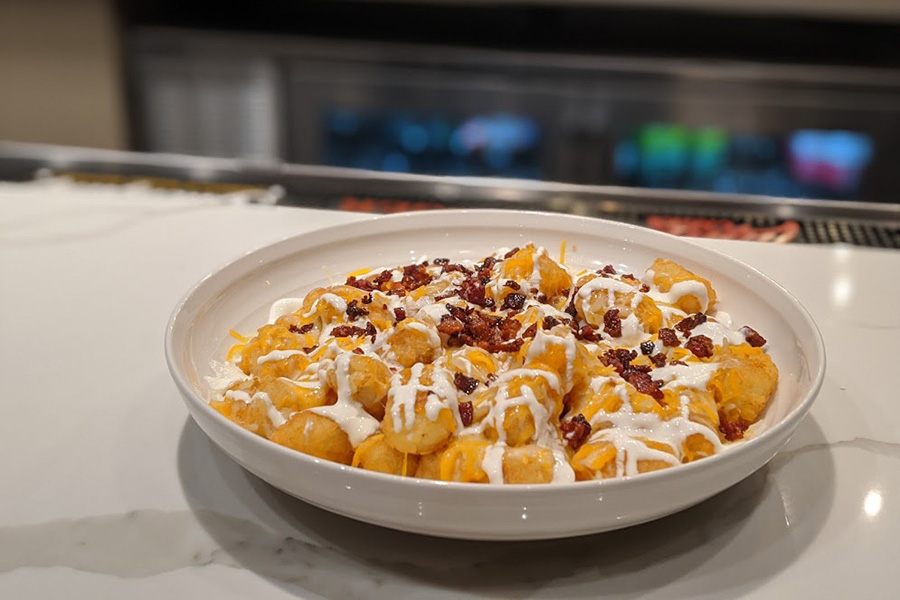 Loaded tots are a signature menu item at Tavern of Tales, a unique board game café opening in Boston in December. / Photo courtesy of Tavern of Tales

Tavern of Tales, opening in Mission Hill on December 6, pairs custom sound effects with storytelling board games. On an immersive adventure into the world of complex games like Forbidden Island—in which players work together to save their land and also collect treasures—you’re bound to work up an appetite. So along with six, sound-proof rooms for optimal immersive board game gatherings, ToT is also opening a café, with a menu of loaded tots—get it?—and other apps, milkshakes, and craft beer.

“We wanted to bring gameplay to life, starting from scratch to create intricate, vibrant sound experiences that allow players to immerse themselves in a completely new way,” Tavern of Tales founder Nicholas Chen said in a press release.

Chen developed the unique concept of sound-enhanced, private board gaming in 2017, as part of his graduation requirements for a sound design degree from Boston University. He previously told Eater Boston that he selected the initial six board games offered at ToT based on how much they could be enhanced with sound effects. Forbidden Island, for example, is soundtracked by heavy rain and rushing water at the new venue. Mysterium, another cooperative game in which players work together as psychic investigators and a ghost to unmask a murderer, is treated with added narration and spooky sound effects.

Players will be able to order food and drinks while playing, as well as meet in the café afterwards “to swap tales of victory and defeat” over a cold Flower Child IPA or a cocktail, and snacks like pizza tots, a charcuterie board, and hummus and veggies. General manager Jake Schaub is overseeing the culinary program.

The bar area will be stocked with other, non-sound-enhanced board games that folks can play while waiting for a private room, or just hanging out. Tavern of Tales also offers a frequent-player discount program, called the Quest Log, where various gaming achievements unlock different rewards.

The private gaming rooms are reservable by the hour, for $10-$14 per person for the first hour. Chen says his team is focused on making Tavern of Tales accessible to everyone from experienced players to novices. Each session will be overseen by a game master, who will help set up the game and explain the rules. “We’ll make sure that you can have fun,” Chen said. “That spirit is embodied in everything from the staff we hired and the game experiences we designed to the very space you can experience them in.”

And that means nobody will be thirsty, or hungry. Check out the opening menu below. Tavern of Tales is hosting gamers now for a “beta” pre-opening preview, without food and drink. From December 6-8, check out the grand opening weekend for a complimentary appetizer for everyone who reserves a game rooms online.