Plus, Wizards Beer Fest is coming to Boston, and other newsworthy leads on where to go out right now. 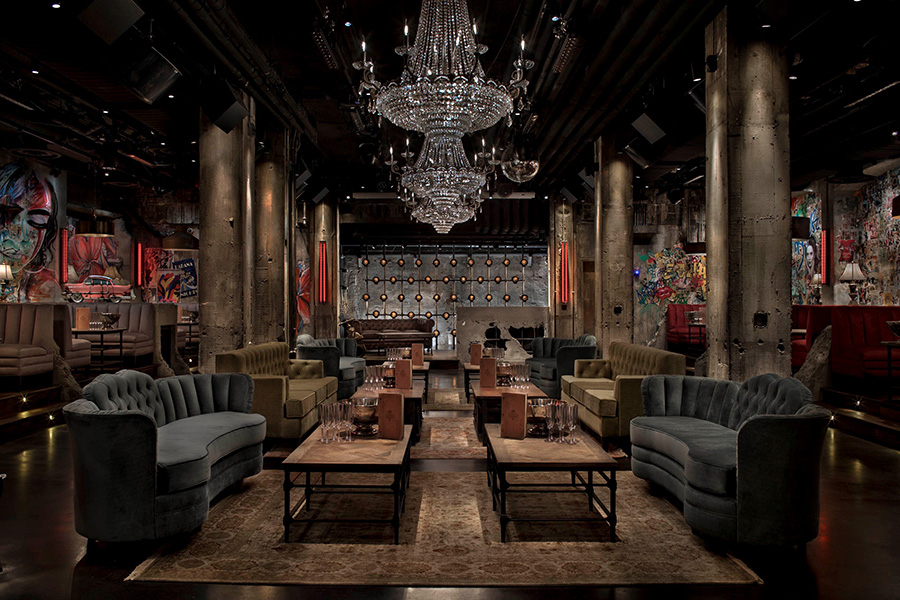 Descend into Mariel Underground with Your Crew for Shareable Mojitos

With Mariel, downtown Boston has a lively new, Cuban-inspired restaurant—and now it has a full-on Havana-style nightclub. As we first reported in this past weekend’s dining guide, Mariel Underground has opened in the basement of the two-month-old Mariel, adding an elevated nightlife experience to what’s already one of the hottest new spots in town. The latest from COJE Management Group, Mariel is the fourth Boston property for the high-rolling restaurateurs also behind Yvonne’s, Ruka, and Lolita Tequila Cocina. Like its sister spots and Mariel above, the moodily lit Underground is a feast for the eyes with graffiti on the walls done by local artists, meant to evoke “generations of Havana street art,” per an emailed statement from the restaurant group. Live DJs and other music programming add to the vibe, which also includes exclusive bottle service. The menus pull drinks and snacks from the upstairs offerings (yuca cheese puffs, crumbled chorizo pizza, deviled crab enchilada, etc.), adding exclusive bottle service, with everything from premium Champagne magnums to top-shelf rums by the bottle; plus large-format drinks, including a shareable mojito. Though it lacks Mariel’s soaring ceilings, Underground is an expansive 260 seats. Walk-ins are welcome, and reservations can be made by phone or email. The nightclub is now open Tuesday-Friday from 5 p.m. until last call, and Saturdays from 9 p.m.-2 a.m. 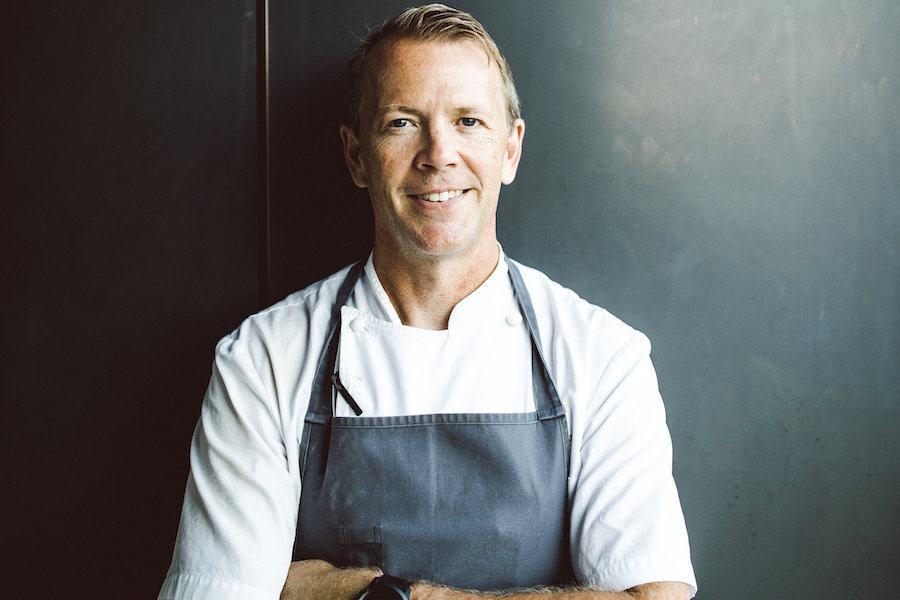 More than a year after announcing Lily P’s Fried Chicken (with another huge restaurant opening in the meantime), chef Chris Parsons has unveiled his new chicken-and-oyster house in Kendall Square. Specializing in pressure-fried fowl and raw oysters on the half-shell, Lily P’s quietly debuted this past weekend with a menu that’s poised to grow, Parsons says. So far, it includes crispy, juicy fried chicken in orders of four, eight, or 16 pieces, in a “classic” flavor as well as hot, and black pepper honey. Boneless fried thighs and Hawaiian rolls comprise three different sandwiches: The Lily P, with pimento cheese and chow chow; Beale Street, with Memphis-style hot chicken and slaw; and Mr. Henson, with bacon, shredded lettuce, and ranch. There is also fried catfish on the menu, plus a couple salads, sides, and snacks including peel and eat shrimp with Creole remoulade; herbed, local cloumage with house-made chips; and tortilla soup. Lily P’s shucks $1 oysters every weekday from 4-6 p.m., and has a full bar. For now, it’s open 11 a.m.-8 p.m., with plans to extend its opening hours as well as the menu in a few weeks—and it’s also opening an outpost at Hub Hall this winter. As Eater Boston notes, it’s a chicken-y time to be in Cambridge: Kendall recently welcomed Shy Bird, from the Branch Line team; and Highland Fried, State Park, and other hotspots also know that bird is the word. 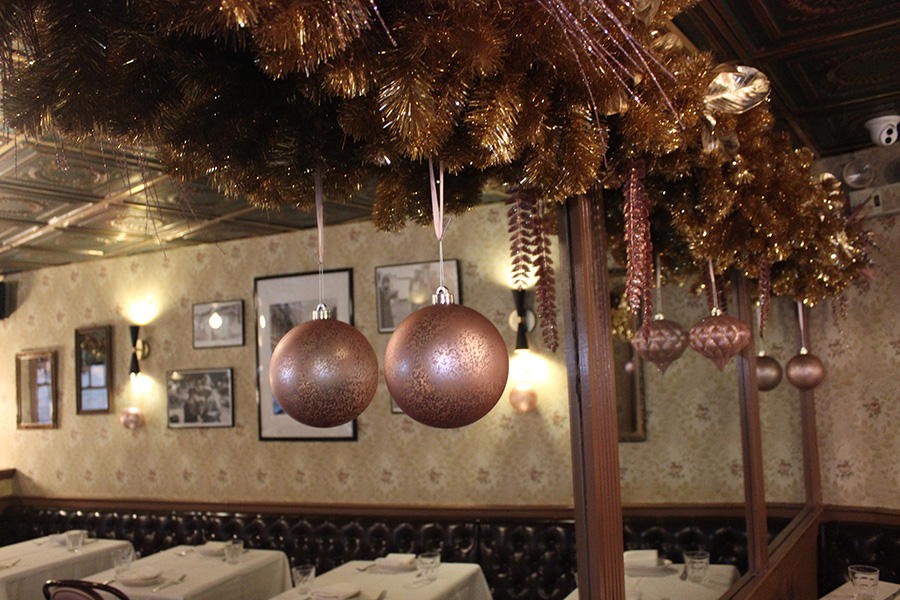 Ciao Bella is decked out for its first holiday season in the North End. / Photo by Justin Power

Thanksgiving is behind us, there’s snow on the ground, and the Faneuil Hall tree is lit: It’s beginning to look a lot like Christmas. Restaurants and hotels around the city are brightening things up with twinkling lights and boughs of holly, and that includes Ciao Bella. For its first Christmas season in the North End, the pretty, pink place is all decked out in antique-looking baubles that match its rosy glow. While the white-tablecloth jewel from All Day Hospitality (Ward 8, Tony & Elaine’s, Bodega Canal) seems the type of place that would go all out with something like special holiday lunch service, the team has chosen instead to launch a series of money-saving events this winter: Wednesday night is now “Spaghetti on Prince” day, with all-you-can-eat spaghetti (plus one meatball per bowl) for $10. On Tuesdays, head to Ciao Bella for “cheap date night,” featuring a $49 meal for two of an appetizer, two entrees, dessert to share, and a bottle of Piccini Chianti. On Mondays, there is throwback pricing on select dishes ($10 pastas and $5 salads), as well as $1 oysters at the (also festively decorated) North Square Oyster Bar next door. For the entire holiday season, Ciao Bella also has special sparkling wine offerings, including flights, to go with the sparkling decor. Happy holidays! 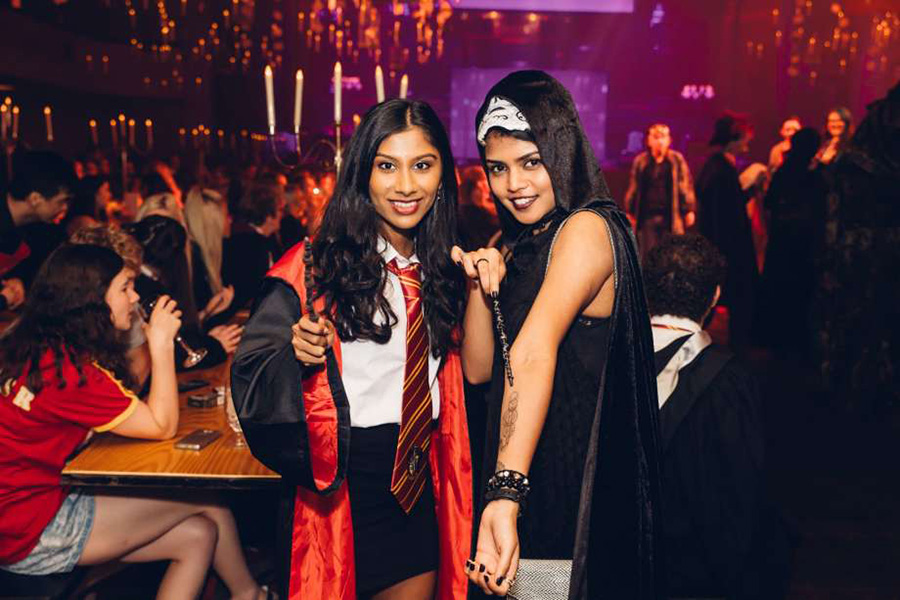 While spring, summertime, and fall play host to tons of festivals that make use of Greater Boston’s parks and waterfront, there’s no time like wintertime to fill up a ballroom with tables full of boozy samples. Coming up this weekend, the inaugural Suffolk Beer Festival is on this Saturday, Dec. 7, in the Seaport. Put on by Boston-based beer events outfit Craft’d Company, the Suffolk Beer Fest features an all-Boston lineup including some of our best breweries, like Night Shift, Backlash, and the brand-new Brato; along with local musicians, vendors, and food vendors including Eastern Standard Provisions pretzels. It also supports local cancer support charity ​Family Reach​. Tickets are available for both an afternoon and evening session. Next up: Muggles and magical beings alike should mark their calendars for February 9, 2020. That’s when the traveling Wizards Beer Fest apparates into Boston for the first time. Launched earlier this year by a company called Rock Beer Fests, the themed event promises local DJs, tarot card readers, wand-making classes, and more magical fun, along with potions fit for the Leaky Cauldron menu. Rock Beer Fests is still finalizing the Boston venue (which is why there’s not Boston link on the website), but locals can provide an email address now to find out when tickets will be on sale. Finally, the Boston Wine Festival has just announced the lineup for its 31st year. It returns to the Boston Harbor Hotel from January 10-March 27, with a variety of ticketed winemaker-hosted dinners, seminars, receptions, and brunches. Check out the lineup at bostonwinefestival.net. 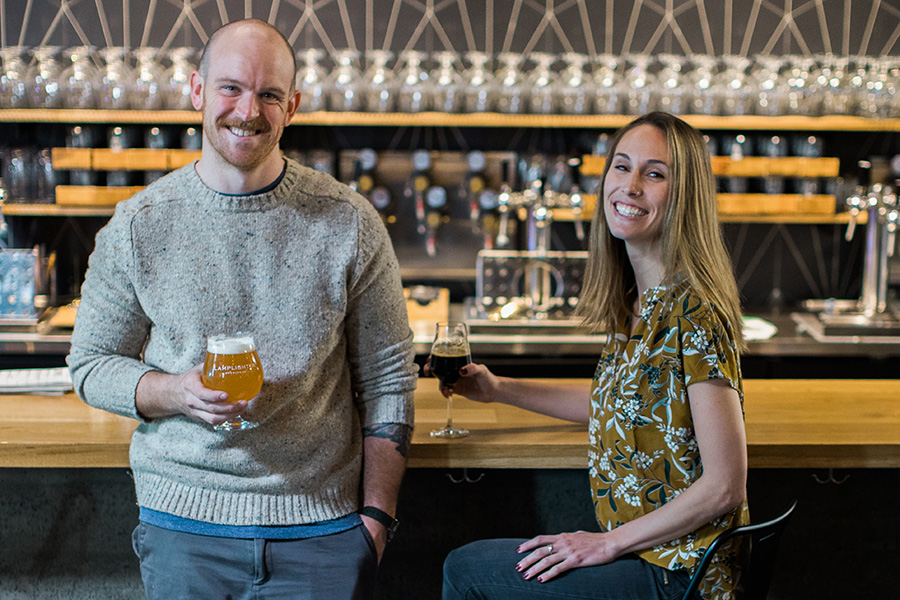 AC Jones and Cayla Marvil are among this year’s Frobes 30 Under 30 honorees. / Alyssa Parker Photography

And finally, congratulations are in order for some of Boston’s hottest beverage makers. Cayla Marvil and AC Jones, cofounders of Lamplighter Brewing Co. in Cambridge; and Nico Enriquez, who cofounded Cape Cod-born Willie’s Superbrew while he was still in college, have all made this year’s class of Forbes 30 Under 30. The trio is part of a group of “600 revolutionaries in 20 industries changing the course—and the face—of business and society.” Along with brewmaster Tyler Fitzpatrick, Marvil and Jones lit Lamplighter in 2016, and have seen seven figures’ worth of revenue every year, according to Forbes. There’s much more in store for Team Lamp: They announced today they are expanding in 2020 with a distillery, nanobrewery, and taproom at Cambridge Crossing, the East Cambridge development that will also be home to new ventures from Puritan & Co. chef Will Gilson.

Enriquez and his late business partner, a family friend and Truro goat farmer named Willie Fenichel, started as a ginger beer company in 2017 before successfully pivoting to become one of the coolest hard seltzer companies around, with unique recipes featuring fresh-squeezed “super fruits.” Cheers!