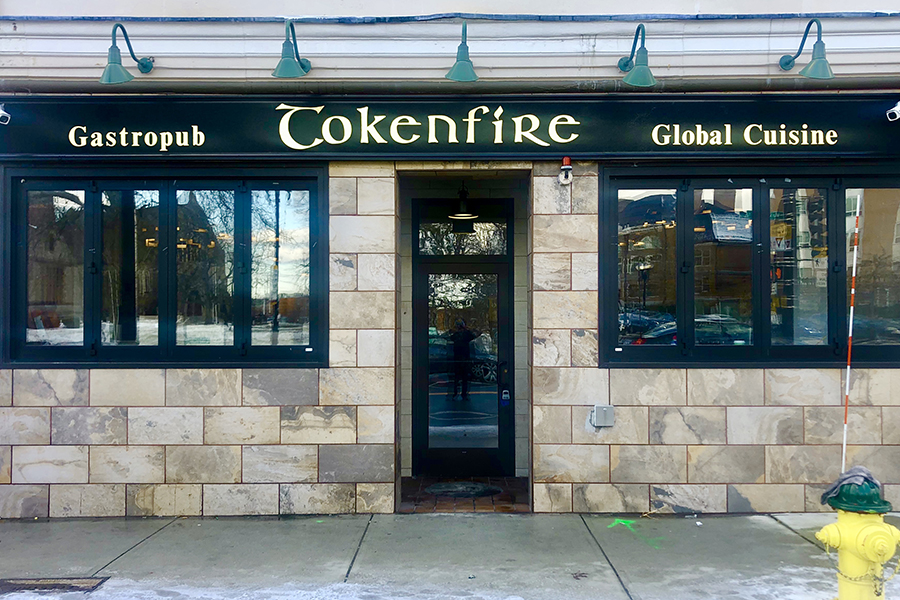 The newest restaurant on the increasingly interesting Quincy Center dining scene is reimagining a familiar format: the Irish pub. Tokenfire, which opens to the public on Friday, Dec. 27, takes elements of the classic bar style—like copper tap handles pouring Smithwick’s on draft—and infuses them with global flavors, contemporary design, and a modern bar program.

“We want to create a community that celebrates our deep Irish roots but offers a global take on modern Irish cuisine, much like you’d find in the pubs of Ireland today,” principal owner Breda O’Connor said in a press release. It’s more than just a bar, she adds: Tokenfire honors the memory of her late nephew and Boston-area industry veteran, Noel O’Connor.

Noel, a first-generation Irish-American and Milton native, died suddenly in 2016, hours after finishing up a bartending shift at Quincy Center hotspot, the Townshend. At the time, he was talking with his employers about opening a new neighborhood tavern called Belfry Hall in a former sports bar space at 35 Washington St. Those plans have evolved into Tokenfire, and the Townshend owners are no longer involved.

“This is a deeply personal project for me and for Noel’s friends and family,” Breda O’Connor said. “The essence of the concept is that he always dreamed of owning a restaurant and bar with an Irish spirit and great food that he wanted to call Tokenfire.”

“We’re excited to bring my nephew Noel’s vision to life,” O’Connor said. Her nephew, who was 42 years old, worked at Todd English’s Kingfish Hall, Boston Rocks at Faneuil Hall, and Church in the Fenway before leaving restaurants for a job with the nonprofit Wediko Children’s Services. Noel stayed connected to the industry and served a mentor to other bartenders; in 2015, he returned to help his longtime friend, Devin Adams, open the Townshend.