The highly anticipated addition is unveiled on New Year's Eve—along with the resident restaurant, M&M BBQ. 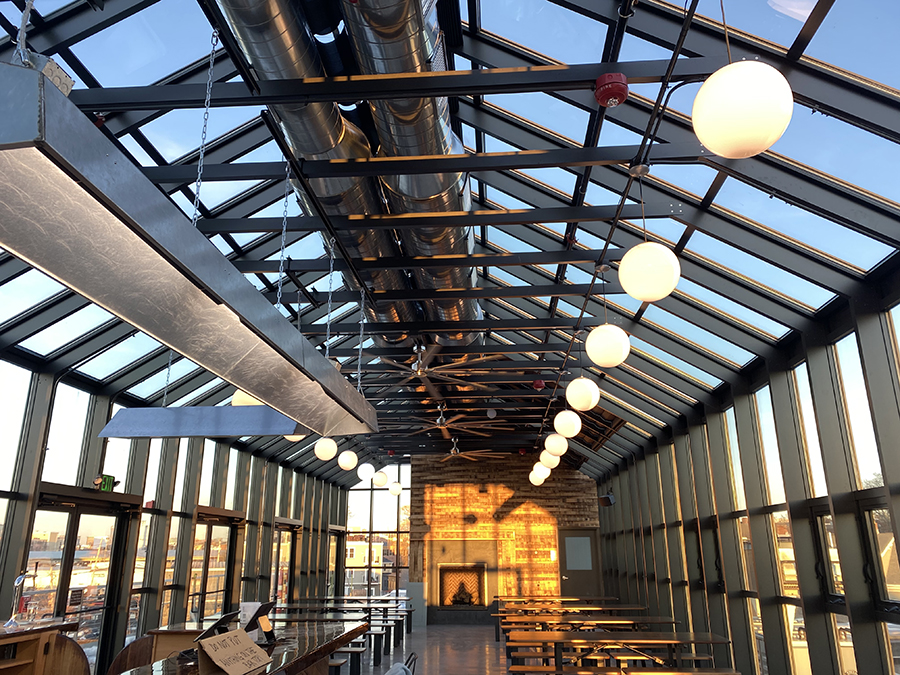 On New Year’s Eve, one party on Massachusetts Avenue is celebrating not just a new year, not just a new decade, but also a new era for Dorchester’s own brewery. Dorchester Brewing Company is ready to unveil its massive new addition—including a year-round, rooftop beer hall, and an M&M BBQ restaurant.

Consider New Year’s Eve a soft-launch for M&M BBQ, with a more-limited menu than the in-house restaurant will eventually offer. The longtime food truck favorite, operated by third-generation pitmaster Geo Lambert, is getting comfortable in its new, state-of-the-art kitchen, eyeing mid-January for a grand opening. For New Year’s Eve, Lambert is cooking up bar bites like beer-battered, crispy-fried wings, and a buttered-and-salted soft pretzel with smoked cheese or tangy mustard sauce; smoked pulled pork and beef brisket sandwiches; Caesar salad; and sides of hand-cut fries, mac and cheese, grilled corn with smoked aioli, and a seasonal vegetable offering. On New Year’s Day, head over for a special brunch menu, too. Below, check out a sneak peek at M & M’s soon-to-launch, grand opening menu.

Barbecue isn’t the only new thing on the menu at DBCo.: The taproom was recently approved for a state farmer winery license, which allows Malloy to co-produce wines and cider at other local facilities. He’s teamed up with La Cantina Winery in Franklin, and Bantam Cider in Somerville to offer exclusive, gluten-free alcoholic beverages at the bar.

Beyond the kitchen, a former DBCo. storage area is now a hangout room with drink rails, a few stools, and (by New Year’s Eve) pinball machines, a skee ball lane, and a 16-foot shuffleboard table. This expanded, first-floor area is also set up to host intimate music performances by local artists “who are looking for a place to get a break,” Malloy says. The renovations also added extra bathrooms and an elevator, and will allow DBCo. to host dynamic private events.

The glass-enclosed rooftop beer hall, which DBCo. is calling “the Hopservatory,” adds more than 120 taproom seats to Dorchester Brewing Company, plus the newest Modern Draught tap system. It also has an exterior deck—and pretty epic Boston skyline views. All told, the addition nearly triples DBCo.’s capacity from about 150 to 440 people. 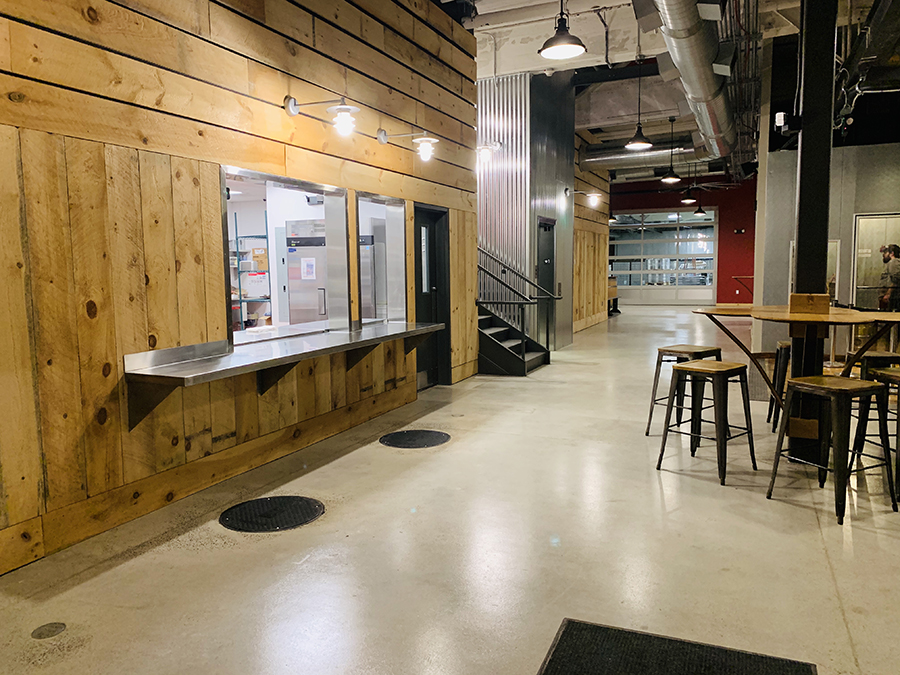 M&M BBQ kitchen at DBCo. Beyond the metallic elevator are brand-new bathrooms, and a hangout area with games and a small music performance area. / Photos courtesy of DBCo. 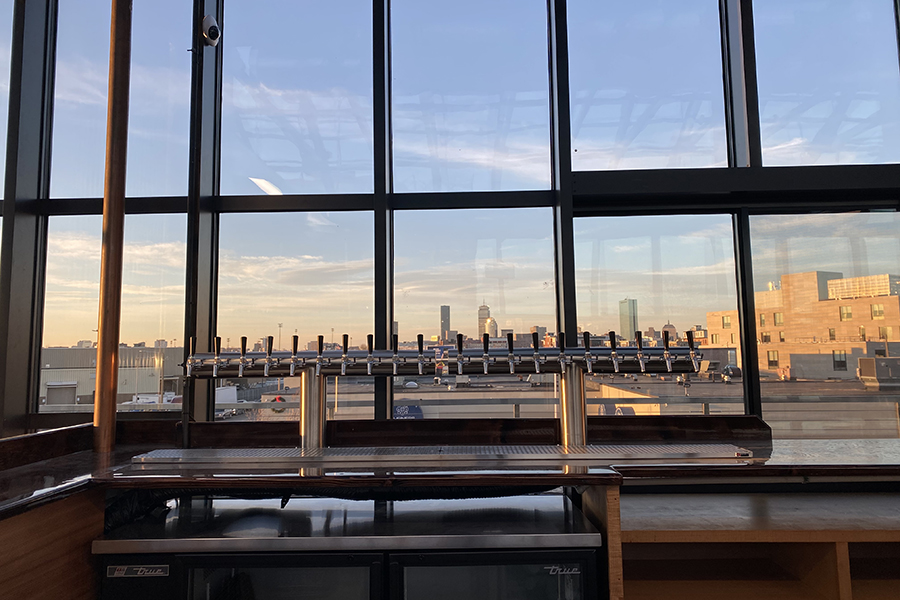 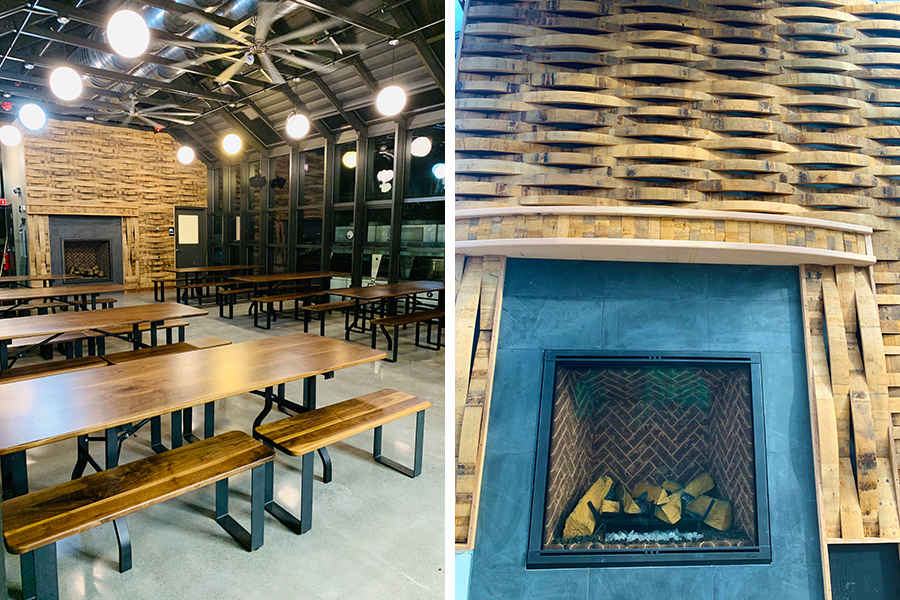 Windows along the walls of the Hopservatory can open to let in fresh air. Reclaimed barrel staves form a pleasing pattern around a large, gas fireplace at the far end of the second-story beer hall. The production team at DBCo., which makes house beers as well as dozens of contracted brands, saved the patina-flecked wooden slats from Marsala wine barrels used to age a past Evil Twin Brewing Co. beer, says DBCo. CEO Matt Malloy. Woodworker Gary Barsomian, Malloy’s Dot neighbor, crafted the accent wall, as well as the upstairs bar, sturdy new beer hall tables, and benches.

The new furniture recalls the original pieces downstairs—because it’s all made from the same wood, Malloy says. “Four years ago,” when his team bought a former sheet metal-manufacturing plant in order to open Boston’s first contract brewery, “we knew we were going to be doing this buildout,” Malloy says. During original renovations, they saved the large supporting beams when they removed a mezzanine level, among other lumber. It now comprises the bars and tabletops. “We took at least eight wood dumpsters out of here,” Malloy recalls.

He also notes that along with the craftsman, tons of other locals contributed to the project, from Concord Electrical workers, to RODE Architects, to the city employees of the Inspectional Services Department at 1010 Massachusetts Ave. Lambert is Dorchester born-and-raised, and 30 years ago, his grandparents, Marion and Maurice Hill, launched their rib truck there.

“It says ‘Dorchester’ on the front [of our building]. It doesn’t say ‘Dorchester Brewing Company,'” Malloy says. “Really, it’s about creating the sense of community.”

DBCo. has not closed at all during the year-plus of renovations, and Malloy is thrilled that people can finally see what his team has been up to. During an all-day New Year’s Eve party loaded with local art, music, and revelry, check it out for yourself once the rooftop at DBCo. officially opens. Stay tuned for full-time hours for M&M BBQ.