Chilacates Cantina Will Replace the Joint Burger Bar in January

The first elevated, full-service version of the award-winning Mexican chain is headed—with booze!—to a revamped space on Centre Street. 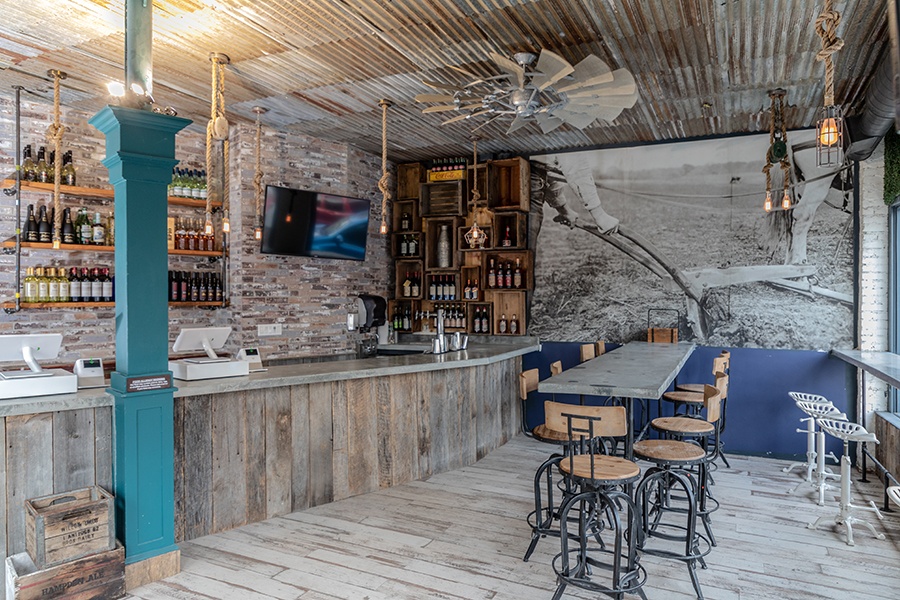 Passion is a key ingredient to the success of Chilacates, the Jamaica Plain-based Mexican restaurant group which now has five award-winning locations and counting. This past spring, owner Socrates Abreu tried something new when he took over longstanding burger restaurant, Grassfed, to open “the Joint” in the neighborhood. But after seven months, he’s not feeling that passion for beefy burgers and truffle fries. So later this month, the pocket-sized corner space will reopen as a sit-down, alcohol-licensed new spot called Chilacates Cantina.

“I never found my groove. I just wasn’t happy with it,” Abreu says of the Joint, which opened in late May. The new restaurant is going “to be something I’m real happy and proud of, that sticks more to my Latin roots.”

Abreu’s sister-in-law and business partner, Kaurys Ramirez, and her husband, Perfecto Gonsaga, are working on the new spot’s menu; the couple also developed Chilacates’ current offerings. Expect some new-to-the-brand dishes, like chimichangas, flautas, and nachos, including personal-sized cans and party-sized servings. The more robust menu will also include vegan-friendly and seafood options, as well as a “family meal” a certain night of the week (probably Sundays), which will be a large-format special like whole-roasted pig.

The Cantina will make its own tortillas, like its sister counters do—including the one that will remain in business just down the block on Centre Street. But instead of standard white corn, it will use whole-grain masa and a traditional nixtamal process. The sit-down restaurant will also add a flour tortilla option to the Chilacates lineup.

The family closed the Joint on December 23, and they are taking some time off this month in the Dominican Republic. Papered-over windows indicate the space is currently undergoing some much-needed renovations: It will finally have a restroom when it reopens, which is an amenity the Joint lacked. (Abreu thanks the team at nearby FoMu Ice Cream for letting his patrons use their facility.) Abreu took over a space next door, which previously housed JP Comics, to build out an accessible bathroom.

The expansion will also feature a comfortable seating area with regular-height tables and chairs, and the current dining room will have more of a lounge vibe, he says. There will be bar service, as well as servers in the dining room. Chilacates manager and local musician Ray Liriano, who is responsible for the hand-painted mural at Chilacates’ Chestnut Hill location, is making some new art for the walls.

The small bar will debut the Chilacates brand’s first lineup of creative cocktails, making use of the Centre Street location’s beer, wine, and cordials license. “We worked magic with it” at the Joint, Abreu says: Bartender Emmanuel Villalobo created drinks like Strawberry Heat, with Ancho Reyes chile liqueur, strawberry, and mango; and Mr. Green, with Chartreuse, pineapple, and lime, that comply with the permit’s restriction on hard liquors. At Chilacates Cantina, expect cordials-based versions of a mojito, a margarita, and more.

This isn’t the first time Abreu has envisioned adding booze to the Chilacates mix. He is currently leasing the former Tony’s Market and Redd’s in Rozzie restaurant spaces in Roslindale Village, with plans to open a side-by-side fast-casual counter and sit-down, bar-style Chilacates there, as well. Securing a full liquor license for that space has taken longer than anticipated, Abreu says, but he’s optimistic at least the counter-service component will open there by late winter.

In the meantime, he’s enjoying the challenge of upgrading the Chilacates menu for the new Cantina. “To elevate our own food is more inspiring to us,” Abreu says, speaking for Ramirez, Gosaga, and the rest of his tight-knit team. “In 2019, I learned to stick to what you love.”

Stay tuned for an opening date for Chilacates Cantina.