Here’s How Bostonians Can Help Fight the Australian Bushfires

A star chef-studded "Boston Barbie," a Fort Point fundraising dinner, and other opportunities to show your support. 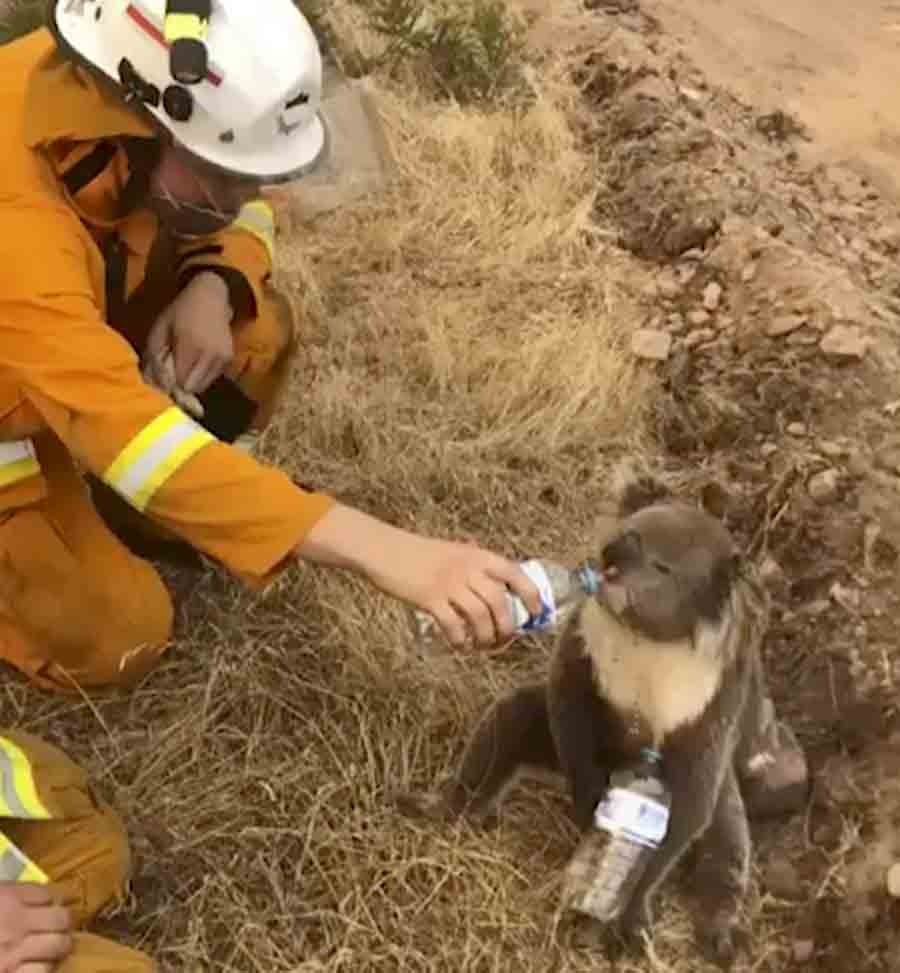 Australia is a country known for remarkable wildlife and unique natural environment, so it’s heartbreaking to see massive wildfires continue to decimate large swaths of the nation. It’s impossible to not feel like doing something—whether or not you’ve ever had the chance to pet a koala. From making donations to the Australian Red Cross, the New South Wales Rural Fire Service, or the Port Macquarie Koala Hospital, there are numerous ways Bostonians can help from afar. But if you’re out and about around town, many of our local restaurants are also here with opportunities to assist.

Tickets are on sale now for an epic Boston Barbie for Bushfire Support, coming up on Tuesday, Jan. 28, at Capo Supper Club in South Boston. The party is organized by Australia native and KO Pies chef Sam Jackson, and it features an epic lineup of chefs, breweries, and sponsors, including Ming Tsai (Blue Dragon), Ken Oringer and Jamie Bissonnette (Toro, Coppa, Little Donkey), Retno Pratiwi (Kaki Lima), Cassie Piuma (Sarma), Notch and Castle Island brewing companies, and many more. Along with food and drink, there will be a raffle and silent auction, with all proceeds donated to Australian organizations that are fighting the fires and supporting people affected by them.

Additionally, Jackson has set up a separate online fundraiser dedicated to injured wildlife by supporting the Royal Society for the Prevention of Cruelty to Animals, the World Wildlife Fund, and NSW Wildlife Information Rescue and Education Service. Fellow Australian-in-Boston business CuppaCoffee has pledged to be a brick-and-mortar donation site to that fund. And Fort Point restaurant Oak + Rowan has announced that a portion of ticket sales from its January 26 dinner, featuring big-name chefs from all over the country, will be donated to KO Pies’ fundraising efforts.

Jackson, who hails from the hardest-hit state of New South Wales, says that while he started watching news about the fires, an “overwhelming feeling of sadness and shock made me feel helpless and in many ways useless.” But he soon realized how many people in his adopted hometown can help. “Via KO and the wonderful amount of locally based industry mates we have here, [I realized] that there was a platform for us to DO something,” Jackson shares via email; KO Pies is currently closed until January 15 for its regular winter break, and the chef is on holiday in Austria (“close [in spelling], but nowhere near home”).

“Within an hour of contacting 20 or so chefs, owners, etc. [about the Barbie], I had a resounding ‘YES, let’s do this’ from ALL of them,” the KO Pies chef shares. “So in true Aussie fashion, it was time to go big. We don’t like to do things by halves. We want to show the people of Australia that they have so much love and support all the way over here in Boston.”

Check out the full lineup of Barbie participants at the bottom of this post. It’s poised to grow, Jackson says, based on early interest. “Beyond our fundraising efforts from the event and the support of the local community, we are calling on the ‘big’ guys in the Boston community to get involved, too,” he adds, like “the owners of the Red Sox, Celtics, Bruins and Patriots. They all have loads of fans of their respective teams back home and it would be awesome to have their involvement. Same goes for all these huge corporations within Boston that we are sure do business back in Aussie. If all these ‘little’ guys can pitch in, then there is no reason why they can’t!”

Just before the Barbie, it’s Australia Day (January 26)—typically the biggest day of the year at KO Pies at the Shipyard. Stay tuned for details on the 2020 throwdown. 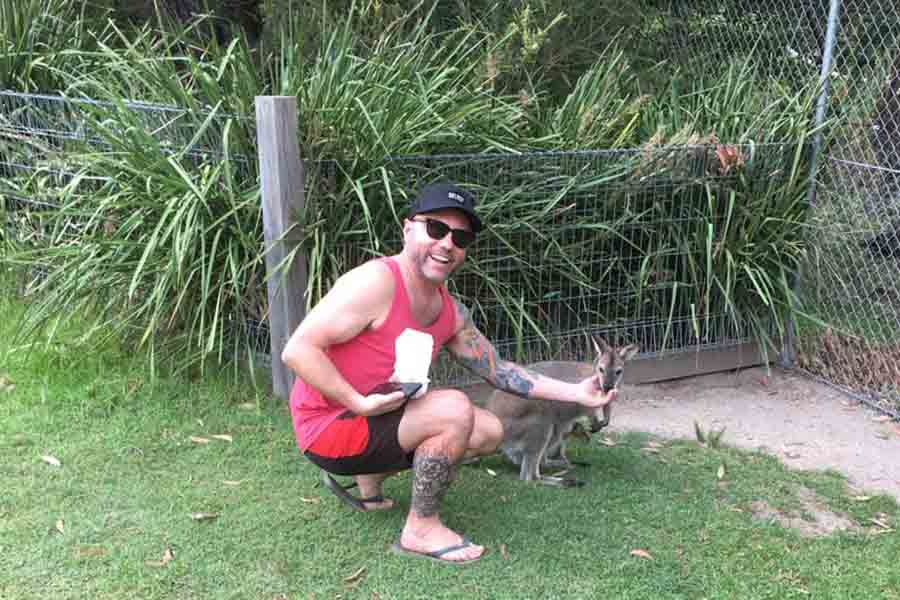 Sam Jackson visits with a kangaroo back home in Australia. The KO Pies chef has organized an epic barbie in Boston for wildfire relief. / Photo courtesy of Sam Jackson

Australian-owned Bluestone Lane coffeeshop is donating all sales profits from its Harvard Square shop—as well as its locations in Los Angeles, New Jersey, New York, Philadelphia, San Francisco, Toronto, and Washington, D.C.—to the Australian Red Cross from January 8-10. Through January 31, all Bluestone Lane stores, as well as the company’s mobile ordering app, will be set up to easily accept donations. And on Australia Day (January 26), the coffee company will host ticketed fundraising events at all locations—stay tuned for the local details about that effort.

“It’s just heartbreaking seeing my homeland in so much pain,” Bluestone Lane founder and Victoria native Nick Stone said in a press release. “We feel compelled to raise funds to support the families and animals impacted by this catastrophic disaster. Our entire company will be mobilized to raise funds and awareness in support of the Australian bushfire appeal, giving back to our first home.”

And it’s not only Australian-born entrepreneurs who are organizing fundraisers. Lauren Friel of Somerville’s Rebel Rebel Wine Bar is using her Bow Market bar’s community-engaged platform to support the wine growing region in Adelaide Hills. Thanks to a generous donation of Borachio Wines from Violette Imports, the tiny wine bar raised $1,234 on Tuesday night. Additionally, Rebel Rebel is featuring Australian wines on its by-the-glass board all week, and the wine bar is also collecting donations for the Adelaide Hills Wine Region Fire Appeal via its “karma jar” through Sunday, Jan. 12. “Folks will have a chance to support Aussie wines by buying them here,” Friel says.

Elsewhere within Bow Market, stay tuned for details about a special dessert from Maca. Maca founder Tamy Chung shared in an Instagram story on Tuesday night that once she returns to her macaron shop after its winter break on January 16, she will be collaborating with Somerville’s Gracie’s Ice Cream on a macaron treat called Koala Hugs.

Dance for a cause

And for something completely different: Lift your voice and move your feet with event company Fangirl Fantasy, which organizes DJ-driven, throwback dance parties celebrating the hits that defined Gen Z. On Friday, Jan. 24, Fangirl will take over Haymarket-side bar the Point for a Lady Gaga vs. Beyonce Night, and  50% of ticket sales will be donated to Australian wildlife rescue WIRES.

The massive wildfires may seem like an intractable problem, especially from Boston. It’s a monumental disaster in the short term, and a crisis that will require longterm support. Here are several chances to assist locals who are stepping up to help—and to enjoy a great drink or snack while you do it.