The rapper's sticky creation is available off-menu through January 19. 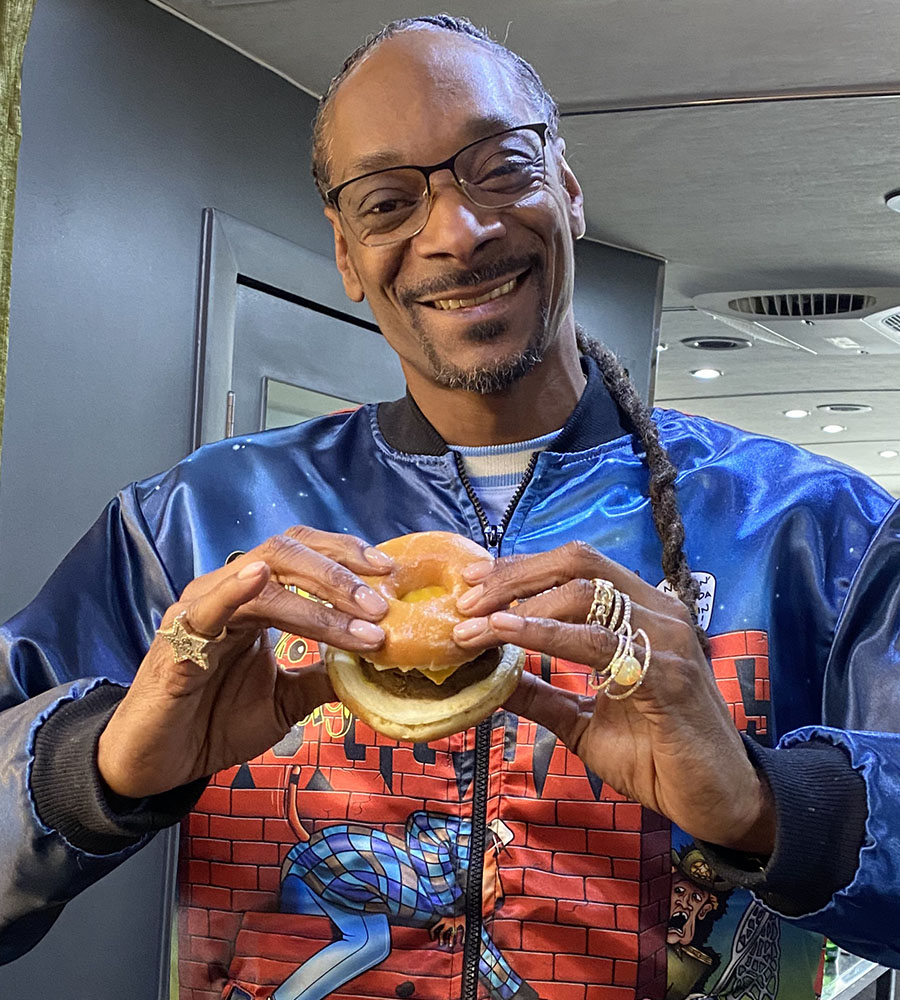 Snoop Dogg is cheesin’ with the Beyond D-O-Double G, a special sandwich he created for Dunkin’ available this week only. / Photo courtesy of Dunkin’

Dunkin’ has some of that real sticky icky icky goin’ on this week: Check out the Beyond D-O-Double G sandwich, an off-menu special available through Sunday, Jan. 19, created by none other than Snoop Dogg himself.

The California rapper is typically talking about potent, green buds of marijuana when he dishes on that real sticky icky, but the iconic lyric could aptly describe his new collab with Dunkin’. Sandwiched between two sides of a sliced, hot, and very sticky glazed doughnut, the Beyond D-O-Double G is an egg-and-cheese sandwich made with Beyond Sausage.

This isn’t the only Snoop-Dunkin’ collab dropping like it’s hot this month. Perhaps you’ve already seen the TV commercial featuring a visored Snoop serving up iced regulahs; it’s airing throughout January. And later this month, a limited-edition online shop will go live with the Beyond Collection by Dunkin’ x Snoop. Super fans will be able to buy a green tracksuit, inspired by Snoop’s outfit in the Dunkin’ ad, emblazoned with the words “Glazzzed for Days” on the back; a bomber jacket, t-shirts, and more. Stay tuned for an official launch date on social media.

The special sandwich, meanwhile, is meant to highlight the vegan-friendly, plant-based meat substitute, which Dunkin’ introduced to its regular menu late last year, becoming the first nationwide quick-service restaurant chain to offer Beyond products. Snoop is an investor and a brand ambassador for Beyond Meat.

He’s apparently a glazed doughnut lover, too. Snoop joined Dunkin’ back in November to help launch its regular Beyond Sausage sandwich, and “I got to thinking about what other Beyond Meat sandwiches we could create,” he said in a press release. “Being around my favorite glazed donuts got me inspired.”

I tried the Beyond D-O-Double G this morning, and I get what Snoop was going for: The combination of sweet and savory is pronounced, thanks to the saccharine pastry and the spiced sausage stand-in. Dunkin’ worked with Beyond to create an exclusive breakfast sausage patty, with a mix of spices meant to mimic its classic pork sausage. It’s a peppery protein with such a similar texture to a fast-food sausage patty that you could be fooled into thinking it’s the real thing.

It’s a more sustainable, and healthier option, though. According to Dunkin’, compared to its regular breakfast sausage patty, the Beyond version has more protein and iron, 50 percent less total fat (and 44 percent less saturated fat), and 37 less sodium. It’s also cholesterol-free. “A key benefit of the Beyond Breakfast Sausage patty is that it is more sustainable for the environment than traditional meats as it requires less water, less land, generates fewer Greenhouse Gas Emissions, and requires less energy than a beef burger to produce,” Dunkin’ adds in a press release. 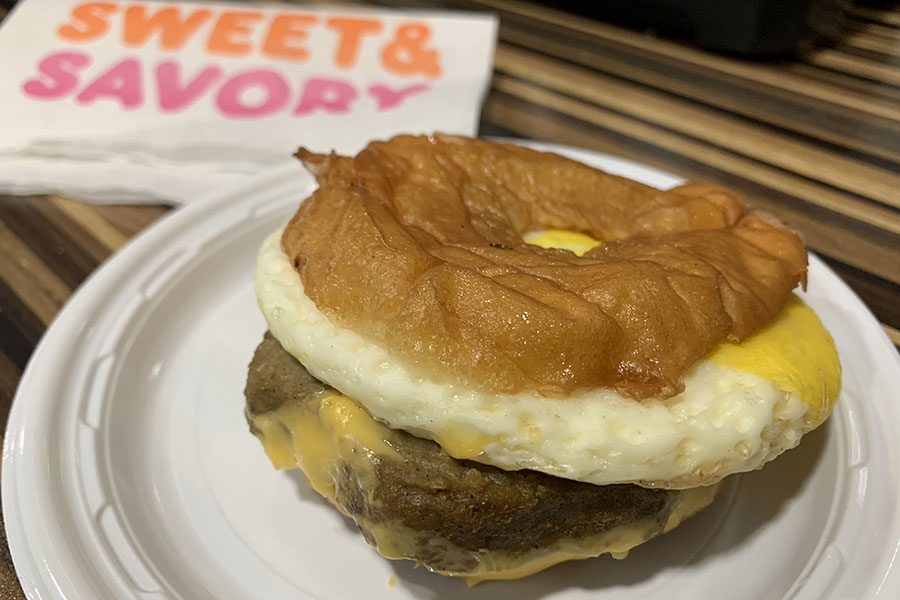 My order of four Beyond D-O-Double G sandwiches this morning might have been the first from the Dunkin’ on the corner of Massachusetts Ave. and Haviland Street. There was no Snoop signage up in the store, nor, sadly, Snoop Dogg working the counter himself. The clerk was happy to oblige, though, and selected four glazed doughnuts out of the case for my order. I overheard her ask her colleague whether they are supposed to heat the doughnuts up for this sandwich or not. The consensus was to heat up the doughnuts, and a few minutes later she handed me a sack of four steaming sandwiches. The special is $3.99.

My review? The small, light, and fluffy doughnuts are not quite the best match for the thick, plant-based protein, scrambled egg patty, and melty cheese. (Dunkin’s regular-menu Beyond Sausage sandwich is served on a sturdier English muffin.) I took the top-most sandwich out of the sack right away, and found it a little bit flattened and, again, very sticky. One of my sandwiches didn’t stand a chance: Its doughnut bun was completely squished and stuck to its paper, the sandwich falling apart completely as I tried to unwrap it.

Sandwich integrity aside, as a sweet-and-savory lover, I’d eat it again. I shared the Beyond D-O-Double Gs with a few colleagues, and one’s review is that it’s “too sweet.” Another coworker said “You couldn’t eat this on T,” which I wholeheartedly endorse—I don’t know who needs to hear this, but please don’t eat any Dunkin’ breakfast sandwich on the T, thanks.

Curious about Snoop Dogg’s foray into breakfast sandwiches? You can order his off-menu special this week at any Dunkin’ location that serves sandwiches. Intrigued about the Beyond Breakfast Sausage in particular? To celebrate the new menu item, Dunkin’ is hosting a “Beyond Bash” with free samples of Beyond Sausage from 8-10 a.m. on Friday, Jan. 24, and Saturday, Jan. 25.