The Newbury Street bistro, his follow-up to acclaimed Select Oyster Bar, is a very Boston take on the classic Parisian style. 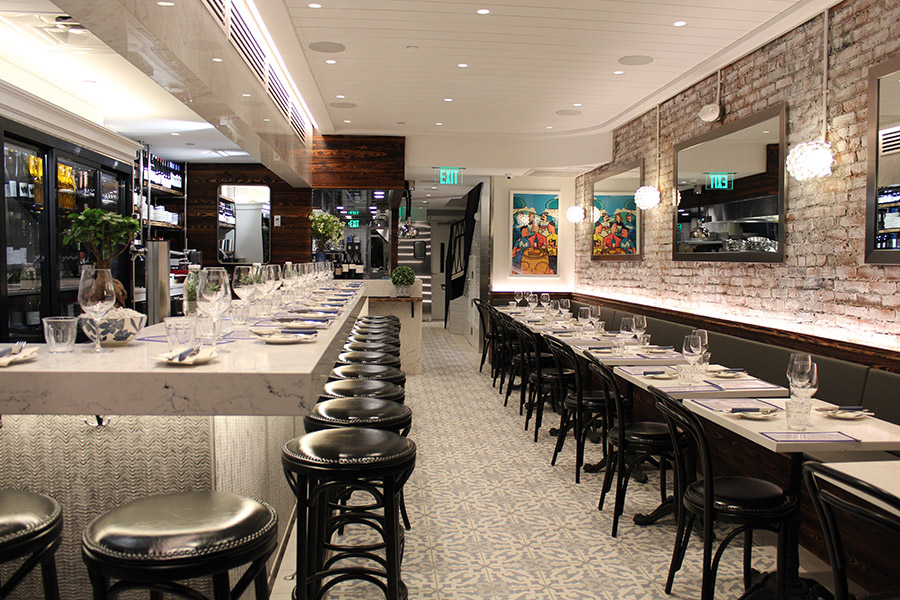 When Select Oyster Bar chef Michael Serpa gets the chance to dine out in Paris, he’ll start by scanning the wine and cheese lists for local delicacies that “I can’t get [back in Boston], or don’t see as often,” he says. At Grand Tour, the Tour de France-inspired spot the chef opens this Wednesday on Newbury Street, California wines and New England cheeses complement French-ish fare in a modern bistro setting.

“It’s the same idea,” says Serpa, who chooses his restaurants’ wines, along with being an operating partner and culinary director. “At Select, we have a lot of people come in from Europe, and they’re like, ‘We want more American wine.’ There are all these cool [domestic] producers now,” he continues, so “it makes sense to me to showcase American stuff.”

Grand Tour is a Bostonian take on the classic bistro style, from the 100-plus-year-old exposed brick walls that complement chic tiling inside the narrow dining room, to the all-American wine by-the-glass list.

Check out the opening menu below, broken down as traditional appetizers and main courses, but also built for sharing, with dishes like local cheeses and charcuterie, leek and fennel-scented mussels, and Savenor’s-butchered steak frites. David Nevins, the original chef at Neptune Oyster Bar, is at the helm in the open kitchen.

Serpa, also an alum of Neptune Oyster, is approaching seasonal vegetable dishes at Grand Tour in a similar way as his raw fish dishes at Select. A butternut squash crudo, for example, is composed with green chiles, pepitas, cider syrup, and chives. “It eats really light, fresh, and vibrant, not like what you think of when you think of squash,” Serpa says. “The most fun for me and Dave is going to be the veggie stuff, especially when spring hits.”

But that’s not to say Grand Tour isn’t reimagining classic bistro dishes, too. Escargots are on the menu, albeit tucked into a flaky pot-pie shell with bacon and cauliflower puree. Caviar service comes in the form of a creamy, perfectly French omelet, topped with a full ounce of Island Creek sturgeon eggs, sourced from California. As for wines by the bottle, there is an equal assortment of options from France as well as from U.S. producers.

“I still want it to feel comfortable and familiar,” Serpa says, “but in that modern bistro vibe of using local stuff.”

Thomas Trykowski of STA Design Studio led the buildout of a former Smoothie King juice shop into Grand Tour. Along with the building’s original brickwork, which got a subtle whitewash, there are pearly, textured, blue and white tiles on one wall; a pattern of Spanish tiles on the floor; and panels of flame-darkened wood to warm up the bright space.

Art on the walls helps tie the place back to sister spot Select: Fans of Serpa’s original restaurant might recognize the style of artist Ale Giorgini, who’s responsible for a print featuring Tour de France champion Egan Bernal and other world-famous cyclists, taking a break from their latest tour to have some wine and cheese. For Select, Serpa had purchased a print of Giorgini’s artwork inspired by The Life Aquatic with Steve Zissou, and over the years he connected with the artist to commission a new work for his latest restaurant.

The 50-seat Grand Tour is located down a few stairs from 314 Newbury Street. Come springtime, it’ll have some outdoor seating, too. The very Parisian design element of a wrought-iron, spiral staircase is the first thing guests will see when they enter; it leads right up to a mezzanine level, which has 15 seats ideal for small, private dining reservations, and regular-service overflow seating. Most visitors will head down into the main dining room, to one of the stools along the white marble bar, or to a table along the opposite wall. Grand Tour will accept reservations.

There’s an additional staircase across from the open kitchen in the back restaurant, and a new elevator makes it handicap accessible, as well. 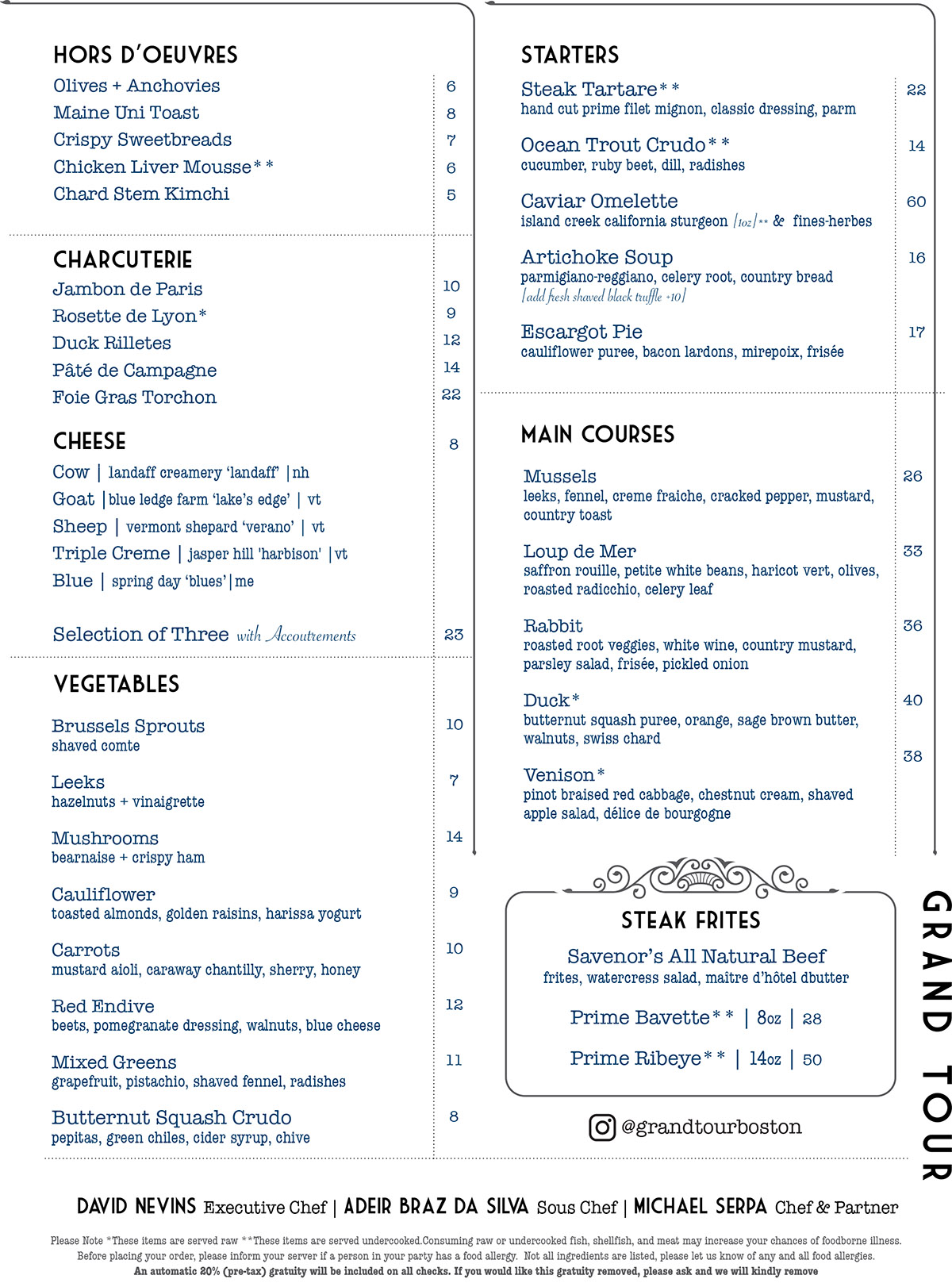 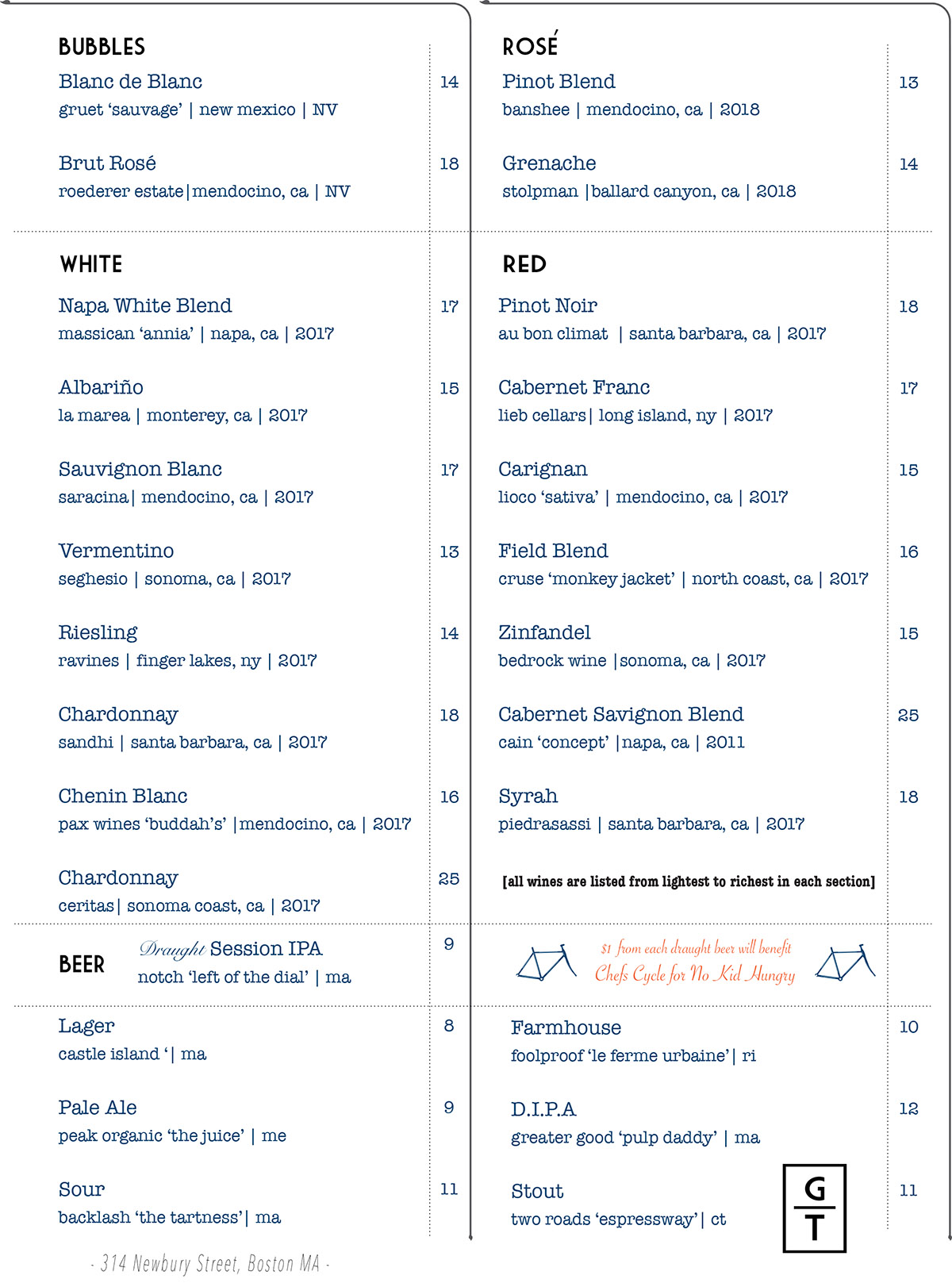