Krasi opens next week in the former Cafe Jaffa space. 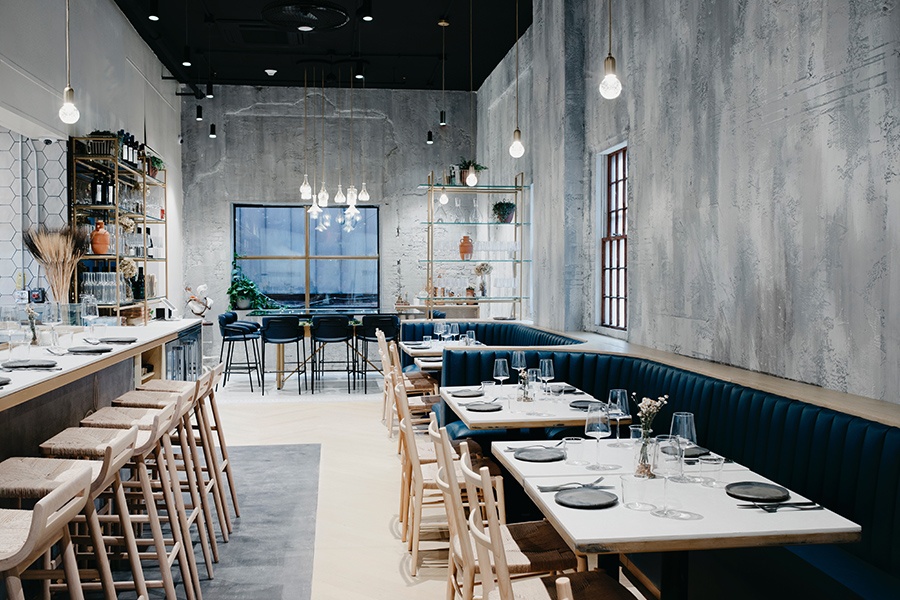 The soaring ceilings, convenient address, and beloved pickles remain, but otherwise the bygone Cafe Jaffa has been totally transformed into a Greek wine and meze bar. Krasi, opening Friday, Feb. 14, at 5 p.m. on Gloucester Street in the Back Bay, is the latest from partners behind Boston’s modern-Greek pioneers Committee and GreCo, and it promises a fresh perspective on Mediterranean food and drink, alongside hospitality worthy of the iconic location.

“When you go to Greece, you’ll feel it. [Greeks are] very hospitable people, and we want that to show,” says Demetri Tsolakis, a longtime Back Bay resident and a partner at the Seaport’s chic ouzo bar, Committee; as well as GreCo, the growing gyro shop empire which debuted a few years ago on nearby Newbury Street. At Krasi, Tsolakis has teamed up with fellow GreCo partner Stefanos Ougrinis, and longtime Committee managers Theo Tsilipanos and Tasha Breshinsky.

A menu of off-the-beaten-path fare and natural wines from the islands help Krasi tell lesser-known stories of Greece, which is one way the concept strives to evoke the cultural concept of philoxenia, or befriending a stranger, Tsolakis says. For example, there will be wines that have never been before poured in Boston, such as rare vintages Aidani and Mavrotragano, produced by legendary Greek winemaker Hatzidakis right before his death; and a unique bottle of assyrtiko from the producer Gaia, which has been submerged in the Aegean Sea for five years. But they will be presented in an approachable way.

“We’re not being snobs here with our wines,” Tsolakis says, which “We’re here to tell you the story behind this wine and why we have it.”

Krasi also offers Greek beers, and cordials not limited to ouzo, but also sipouro, mastiha, and tentura, as well. (Later this spring, a separate, cocktail-focused concept called Hecate will open below Krasi. The basement-level bar will have its own, “secret” entrance off a side alleyway. Stay tuned for more details on Hecate.) 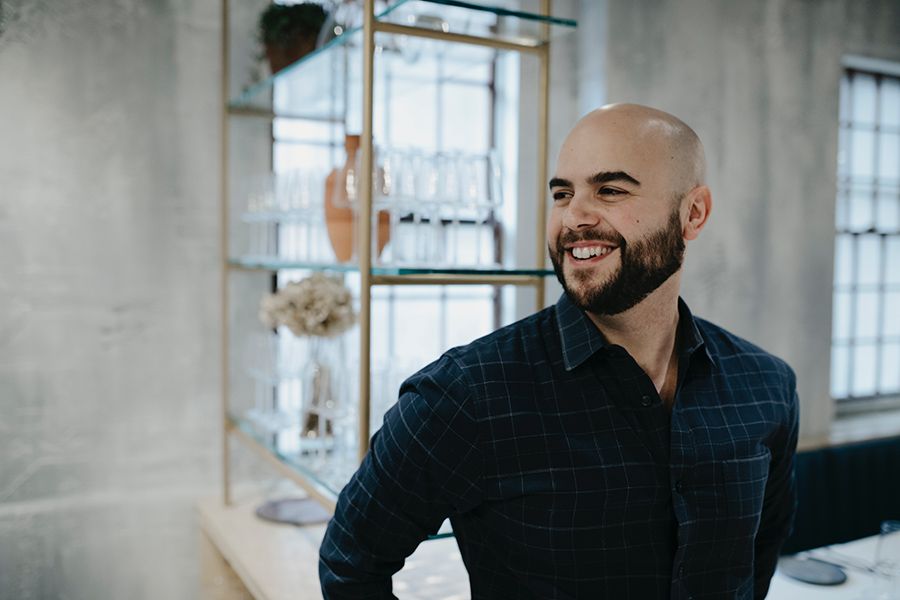 Demetri Tsolakis debuts his third restaurant concept, Krasi Meze and Wine Bar, in the Back Bay. / Photos by Sam Swan

There are five counter seats in front of Krasi’s open kitchen—at the end of its new, 15-seat, marble-topped bar—where diners might taste that hospitality first-hand, as the culinary team might share bites of meze coming off the souvla (Greek-style rotisserie).

“We want people to really watch the kitchen,” Tsolakis says. “Greeks do some cool techniques.”

The Krasi crew, overseen by chef and partner Theo Tsilipanos and executive chef Valentine Howell, will showcase some of those techniques through a bread-baking program; a lineup of Greek-style cured meats, custom-made by New England Charcuterie; dips blended table-side, and other traditional cooking methods. To really feel like you’re dining in a hospitable Greek family’s home, larger parties can “Feast Like the Gods:” The $349 order brings one of each of Krasi’s two-dozen meze plates to the table.

Tsilipanos is a Greece native, and a L’Espalier and La Brasa alum who has been with Committee since 2017. Howell formerly cooked at Mastro’s Ocean Club and Legal Harborside, though he first met Tsolakis while the former was working with Lydia Shire at Locke-Ober.

Veteran Cafe Jaffa line cook Oscar Flores has stayed on for his 28th year at 48 Gloucester Street, which thrills Tsolakis, he says. With his former bosses’ blessing, Flores is making Jaffa’s pickles for Krasi’s charcuterie boards; he will also revive their classic falafel recipe once Krasi begins serving lunch in April.

“It’s an ode to them,” Tsolakis says. Through GreCo, he got to know the family behind Cafe Jaffa, who are now his landlords. When they decided to retire and sell their business—including its beer and wine license—the family approached the GreCo group with the opportunity, Tsolakis says.

“They want to keep that same family vibe in here,” he says. “I wanted to make something that they can be proud of, too.” 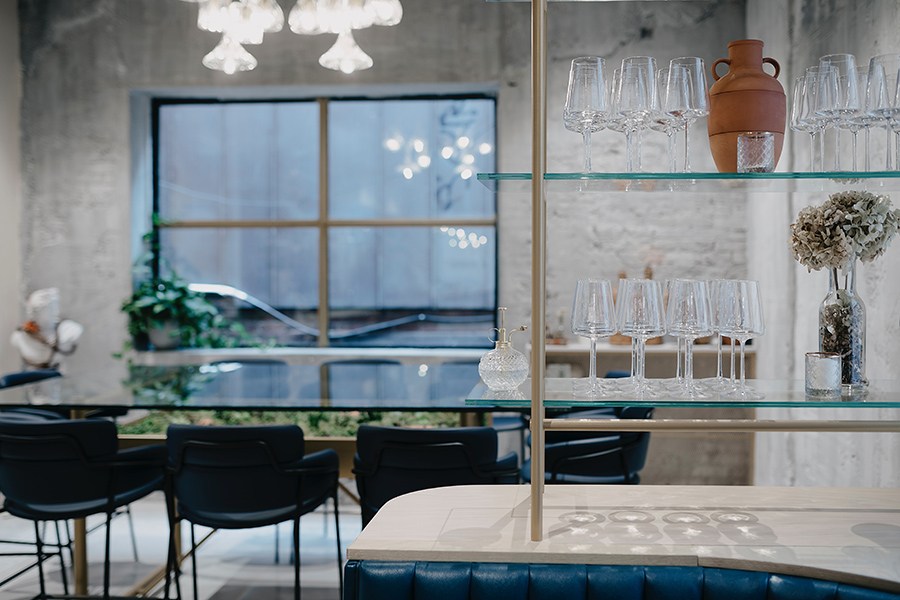 The physical atmosphere, however, is completely new. Gray and white-marbled plaster replace the red-brick walls of the former café, and light woods cover the floors and furniture. Cool, blue, U-shaped banquettes span the wall across from the bar, and greenery and glass offset ancient Greece-evoking details, such as terra cotta, artfully crumbling plaster, and gold.

In the back of the restaurant, there is a communal table—sleek glass atop a field of live succulents—available for reservations of up to 12, and the front windows feature two spacious booths, but Krasi will not accept regular dining reservations. It’s meant to be a neighborhood restaurant for the Back Bay, Tsolakis says—although one that’s been plucked right out of a small town in Greece.

Krasi opens to the public on Valentine’s Day night (coincidentally, chef Valentine Howell’s birthday). Until lunch launches later this spring, it will serve drinks daily from 3 p.m.-midnight, and dinner from 5-10 p.m. 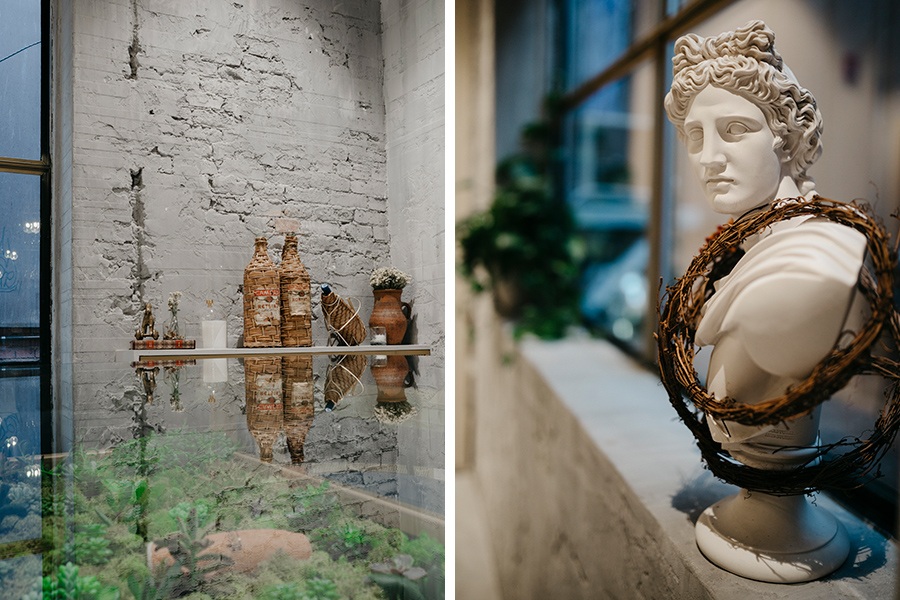