A pop-up sausage purveyor is putting down roots—and picnic tables—in the heart of the neighborhood. 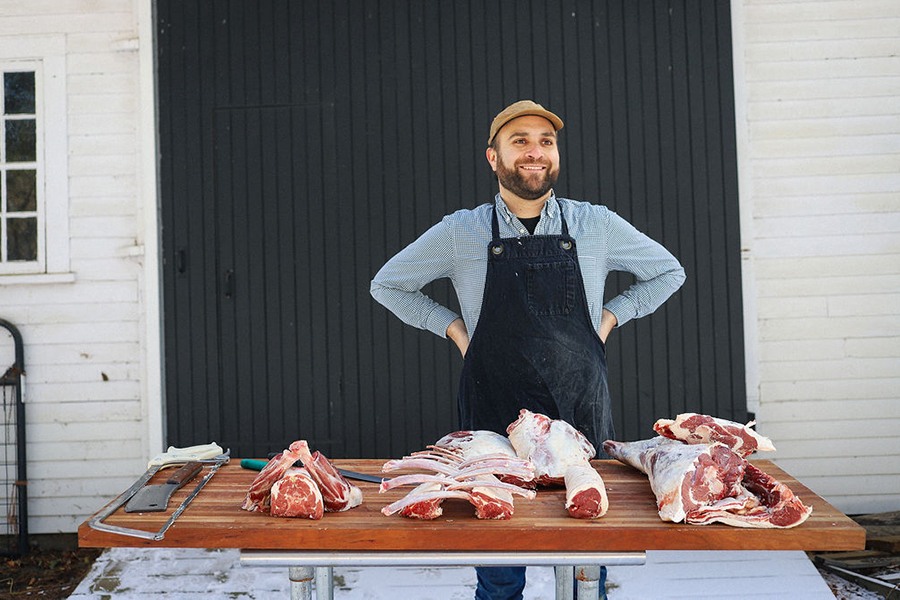 Later this year, an eyesore on Jamaica Plain’s thoroughfare will become a place where the community—as well as fans of a popular meat-centric pop-up—will find a highly anticipated nose-to-tail butchery. Meadowlark Butcher & Grocer is opening in fall 2020 at 579 Centre St., the long-empty site of the former JP Gas & Mini Mart. The small grocery store will sell locally sourced, grass-fed meats—including rotating flavors of sausages, which Meadowlark has sold at pop-up events around Boston—plus complementary groceries, like local produce, dairy products, select prepared foods, and beer and wine.

Meadowlark Butcher launched as a sausage pop-up operation in early 2018, when butcher Max Gitlen moved back to JP from Western Massachusetts. “My goal is unwavering. I’m trying to bring the best sustainably produced meats, produce, and groceries to our community,” he says.

Gitlen began his career with the Food Project, an eastern Mass. non-profit behind a variety of programs around sustainable agriculture. The organization introduced him to organic farmers, and the craft of whole-animal butchering; he left to apprentice at Formaggio Kitchen and eventually worked with chef Matthew Jennings at his acclaimed Providence farm-to-table market and restaurant, Farmstead. In 2013, Gitlen relocated to Great Barrington and helped manage chef Jeremy Stanton’s independent butcher shop and café, the Meat Market.

“Those businesses really gave me the opportunity to figure out how to make a whole-animal butcher shop work,” Gitlen says. Though the Meat Market has since closed, “I feel really proud of what we were doing out there, but for me the message was clear I needed a bigger market to make it work.”

That’s because the business plan calls for sourcing whole, grass-fed animals from farms around New England and New York, and processing them in-house to offer “cuts you don’t see in the supermarket very often,” Gitlen says. Not only does maximizing the useful parts of each animal contribute to Meadowlark’s profits, he says, but it enables his business to “help farmers make their sustainable, pasture-based operations work, financially.”

It will be good for the customer, too, he adds. Besides common cuts like strip steaks, and more unique butcher-shop options like bone-in pork belly, or British-cut lamb shoulder roasts, Meadowlark will also have a farmers’ market-quality selection of produce, eggs, and dairy, including “curated New England farmstead cheeses,” Gitlen says. He also plans to apply for a package-store liquor license to sell craft beer, wine, and cider.

“Prepared foods are the third piece of the puzzle,” he adds, but Meadowlark won’t operate like a deli. At least at the beginning, prepared foods, like roast chicken, platters of meatballs, roasted vegetables, and grain salads, will be geared for takeaway. Gitlen does hope to offer a rotating sandwich and/or soup of the day, though, “especially on weekends,” and perhaps a more robust hot lunch offering in the future. “My philosophy is: start doing less, really well, and grow into it over time,” he says. “We’ll see what people in the neighborhood are looking for.”

Gitlen sees the future butcher shop’s proximity to JP’s go-to grocery store, Whole Foods, as an asset. “For people out doing their big weekly shop, it’s not difficult to pop a couple blocks down and get some stuff from us as well,” he says. “At 1,400 square feet, we are not going to replace a supermarket. My goal is to focus on things that a company like Whole Foods doesn’t provide very regularly, which are truly local, traceable, small-farm products.” 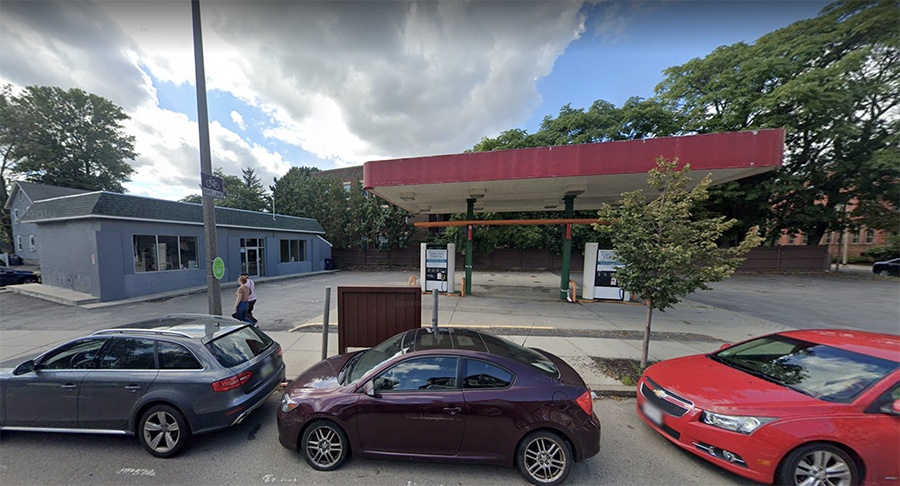 Along with produce shelves and reach-in coolers, the small store will have a butchering area, visible most of the time to customers, Gitlen says. Renovations will include building out a kitchen, as well, with a bumped-out, walk-in cooler in the back of the building. The property will have seven parking spaces for cars, plus a bike-parking rack. There won’t be any indoor seating at the market, but Gitlen plans to set up some picnic tables outside, underneath the gas-station canopy, which he plans to retain and spruce up.

“I’m excited about leaning into the fact that it was an old gas station,” Gitlen says. “It’s part of the fabric of our neighborhood.” He also notes that it seems as though someone in the community has been “guerrilla gardening” on the property—planting wild plots of sunflowers underneath its old sign, for instance. “I would love to meet that person,” Gitlen says, laughing, though clearly not joking.

The butcher has signed a lease, and is embarking on the zoning appeals process with the City of Boston to convert it to a retail property, he says. That will require some upcoming community meetings. Gitlen wants to have a dialogue with his neighbors, and will listen to any concerns they might have with his proposal, but he hopes people “see me as a person who lives in the neighborhood, and has had a dream of opening this in the neighborhood for quite some time,” he says. “I want to be a vibrant and exciting addition to the community.”

Stay in touch with Meadowlark Butcher & Grocer on Instagram and Facebook as it gears up for a fall 2020 opening in JP. 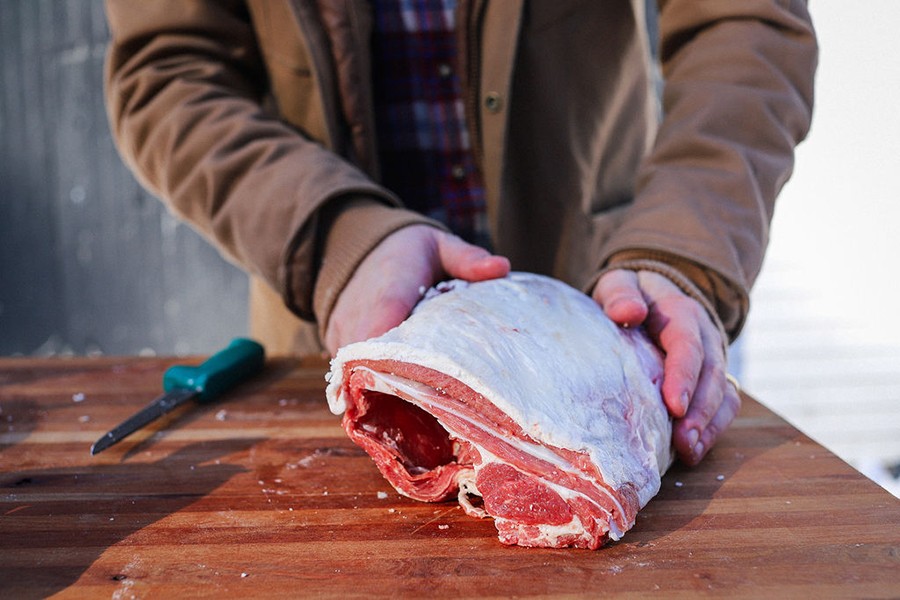 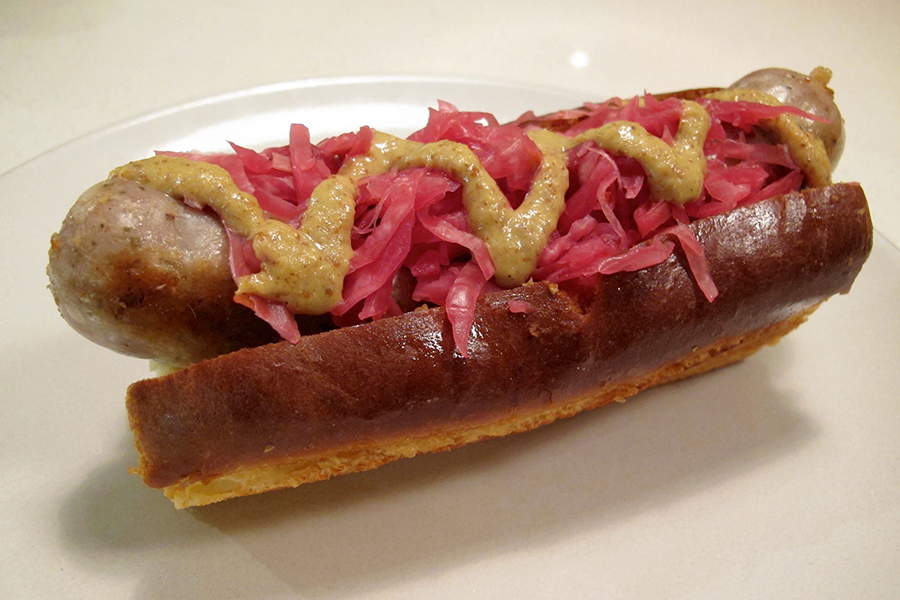