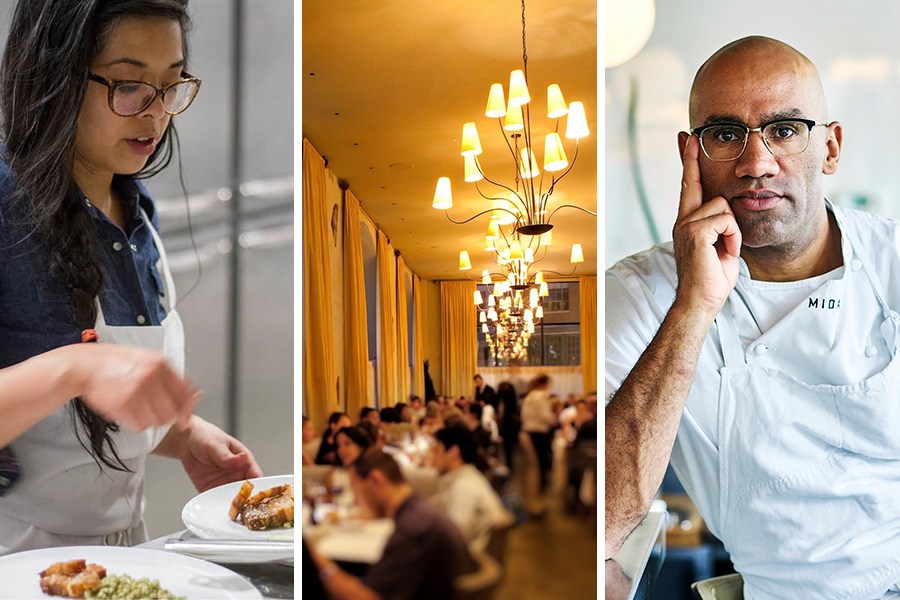 Chefs, restaurant teams, beverage pros, and more culinary talent is celebrating around the country today for being considered for the “Oscars of the Food World.” Ahead of the 30th annual James Beard Awards coming up this spring, the Beard foundation has named dozens of semifinalists—including some familiar names from Boston, Maine, elsewhere in New England—in categories like Best New Restaurant, Outstanding Restaurant, and regional Best Chefs in some slightly reconfigured geographic areas. For the first time this year, chefs in greater New York State join the former “New York City” region, opening up “Best Chefs Northeast” to more New England names.

Among the local James Beard award nominees for 2020 are Outstanding Restaurant Neptune Oyster, a North End landmark now led by the young and talented chef Eric Frier; and Portland, Maine, standby, Fore Street. Two restaurants listed among Boston magazine’s Best New Restaurants of 2019, which both also have made their way to our updated list of the city’s 50 Best Restaurants, made it on the JBF’s radar this year, too: Fox & the Knife, the hotspot-first effort from Top Chef Karen Akunowicz, adds a Best New Restaurant nod to its trophy case; and so does Tanám, the inimitable Bow Market effort from up-and-coming chef Ellie Tiglao, bar director Kyisha Davenport, and their worker-owner team.

Twenty-plus years in, Back Bay jewel Mistral is recognized this year for its Outstanding Hospitality. For the second year in a row, Haley.Henry represents Boston’s blossoming, lady-led natural wine scene on the national map with a nomination for Best Wine Program; while pioneering Vermont winemaker Deirdre Heekin of La Garagista is again contending for Outstanding Wine Producer. Woburn destination the Baldwin Bar continues to earn acclaim; and for the first time, beloved Portland, Maine, bar Novare Res Bier Café has its stellar beer program noticed by the JBF.

Mei Mei chef-owner Irene Li’s star is apparently still rising in the eyes of the JBF judges—she is nominated in that category again after several years in a row. Oleana chef Ana Sortun is once again an Outstanding Chef semifinalist, while her Sofra business partner and counterpart in all things pastry at Sarma and Oleana, Maura Kilpatrick, is again up for the Outstanding Baker nomination. The dynamic duo that is Ken Oringer and Jamie Bissonnette, leaders of Toro, Coppa, and Little Donkey, are among the Outstanding Restauranteur semifinalists.

Among some new names in 2020 are a few Best Chef: Northeast contenders, including Tracy Chang of Cambridge’s Pagu; Douglass Williams of Mida in the South End; Mayumi Hattori of the renovated, 40-plus-year-old Nantucket mainstay, the Club Car; and Vien Dobui of Portland’s lively pho house, Công Tử Bột.

Previous semifinalists who are again on the list include the venerable Tiffani Faison, who added Orfano—and another rave Boston magazine review—to her Fenway restaurant group this year; the Table at Season to Taste toque and affable Top Chef alum Carl Dooley; David Vargas, the chef behind the Seacoast’s Vida Cantina, quite possibly New England’s best Mexican restaurant; and James Mark of Providence’s Big King and North restaurants.

The James Beard Foundation, which has recognized excellence and achievement in the culinary world since 1990, has made an effort to diversify its award nominations in recent years. Redrawing certain geographic areas for 2020 is a way to broaden the regional honors, Eater has noted. Today’s long list will be narrowed down to five final nominees for each category, announced Wednesday, March 25, from Philadelphia. The annual awards gala is Monday, May 4, in Chicago, and will also feature awards for Restaurant Design categories, and special achievement awards like America’s Classics, which honors the casual Manchester, N.H. favorite Puritan Backroom in 2020.

Best New Restaurant
A restaurant opened in 2019 that already demonstrates excellence in cuisine and hospitality, and that is likely to make a significant impact in years to come.

Outstanding Hospitality
A restaurant in operation for five or more years that demonstrates consistency and exceptional thoughtfulness in hospitality and service.

Outstanding Wine, Beer or Spirits Producer
A beer, wine, or spirits producer who demonstrates consistency and exceptional skill in his or her craft.

Best Chef Northeast (CT, MA, ME, NH, RI, VT)
Chefs who set high culinary standards and also demonstrate integrity and admirable leadership skills in their respective regions. A nominee may be from any kind of dining establishment but must have been working as a chef for at least five years, with the three most recent years spent in the region.